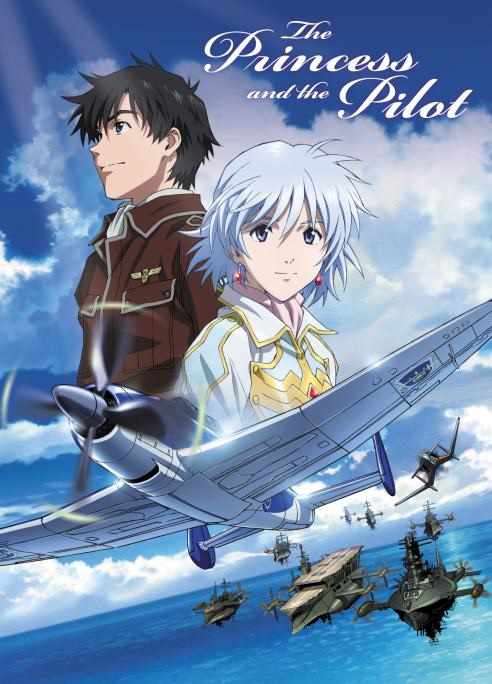 Overview
When NIS America announced that they were entering the anime industry in 2010 it was a pleasant surprise. Since then, at the time of this writing, they have released eighteen anime series in premium edition packages and even re-released a number of them for fans that missed out on the premium run. However unlike many anime distributors, the company has avoided bringing anime films to North America. That has changed with their release of The Princess and the Pilot, but is the movie worth purchasing?

Story
The Levamme Empire has been at war for many years and they have been on the losing side of things, but despite this the empire has remained strong thanks to its royal family. After the prince of Levamme declares his love for a wealthy girl named Juana del Moral and promises to marry her in a year’s time once the war is over. 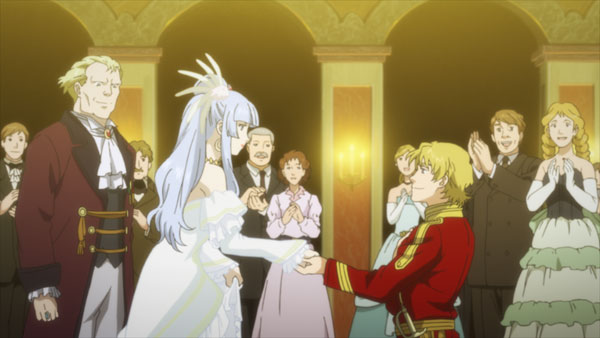 However after enough time has passed, the war is raging harder than ever and in an effort to weaken the Levamme Empire, the Amatsukami Imperium launches a surprise assault on Juana’s estate, killing her father and nearly Juana in the process. After such a vicious assault, a plan is hatched by the Levamme forces to smuggle Juana over enemy lines into her husband-to-be’s waiting arms. The pilot tasked with this solo mission is Charles, the best pilot of the San Maltilia Airforce.

Despite being the best around, Charles is the subject of much criticism and is treated like a rat thanks to his parentage. Being a “bestado” as he is called, Charles accepts the mission and begins his flight with the soon-to-be princess in a one-way flight to the prince. Despite being a straight shot to the meeting point, their journey quickly becomes one of danger and romance as the Amatsukami have caught wind of their flight and it turns out that this isn’t the first time these two have met one another. 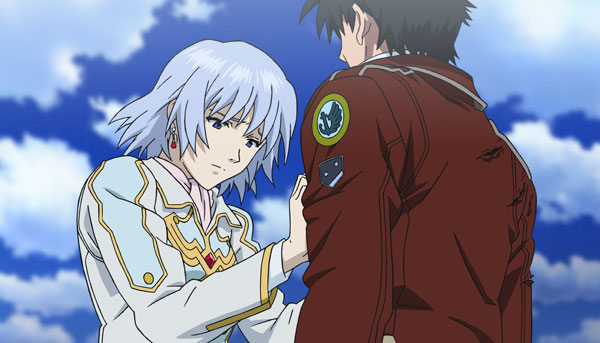 Stories of a forbidden romance are far from rare, in fact many of the most well-known storylines revolve around a love that cannot come to fruition and that happens to be the case with Princess and the Pilot. It is worth noting that this movie is likely not for everyone as it can be very slow moving at times and even boring despite the fact that the hour and a half movie length forces the story to advance without a lot of extra details.

Despite the movie length, by focusing solely on Charles and Juana viewers are able to see how strongly these two become attached to one another. There are multiple moments throughout the presentation that we see Juana grow as a person as she abandons parts of her naiveté, usually through symbolic means, and accepts the world as it is. Though a few plot points are brought up but then completely unexplored thanks to the limited presentation time and poor pacing. 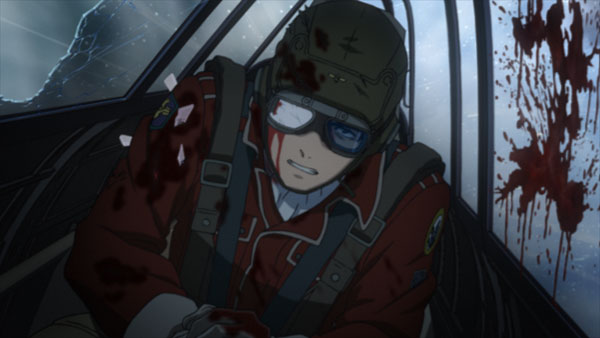 The Princess and the Pilot tells us a love story fraught with peril as some of the best sequences are the dogfights as enemy planes attempt to shoot down Charles, but ultimately this is a story cemented in reality. Despite the feelings that the two share with one another, Charles is the lowest of the low in society while Juana is about to be the next princess of the country. This leads to a… let’s call it realistic ending that can be perceived as happy but will stick with the viewer after the credits roll as the poignant truth of the movie’s world sinks in.

Visuals
Considering this is a review it would be unfitting to simply provide a one word answer to any merit of Princess and the Pilot but if I had to sum up the animation and artwork with one word, it would be outstanding. This anime has amazing production values whenever the movie takes to the air. The designs of the planes are highly detailed and are gorgeous in motion, especially when it comes to the dogfighting. 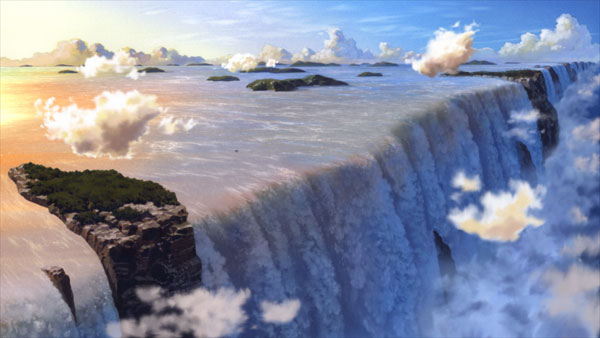 The animation is still rather impressive when it simply focuses on the characters themselves as they are nicely animated and thanks to the symbolic changes that Juana undergoes, her character design reflects her evolving personality. It is worth noting that some of the talking scenes with the side-characters see a dip in animation but even here everything is presented crisply with vivid colors that look great on Blu-ray.

Audio
Being a release from NIS America viewers should note that The Princess and the Pilot comes with only the original Japanese voice track and English subtitles. This isn’t too much of an issue thanks to the fact that the original Japanese voice actors are more than suited for their roles and there are a number of inserted songs, such as a lullaby, that work best with the Japanese cast handling the performance. 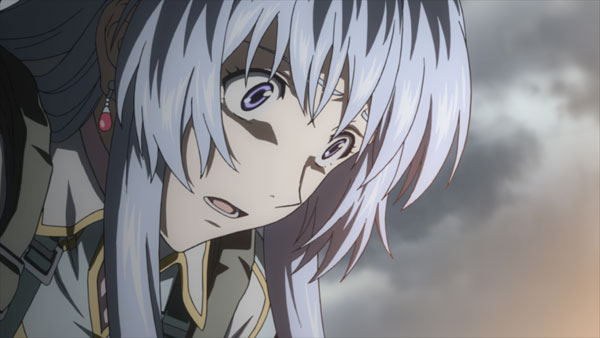 The sound effects for the series are top notch, especially when it comes to the dog fights as they sound spectacular. There are a number of decent background tracks used throughout the movie, though none really are noteworthy outside of the aforementioned insert songs which feature Japanese vocals.

Extras
NIS America has given The Princess and the Pilot the Premium Edition treatment which means the movie comes in a large oversized chipboard slip-case which features a gorgeous piece of art featuring Juana and the plane on the backside and the cover art shown at the top of the review on the front. The on-disc extras are rather simple, as they are Japanese promotional materials and trailers for other NIS America anime releases. 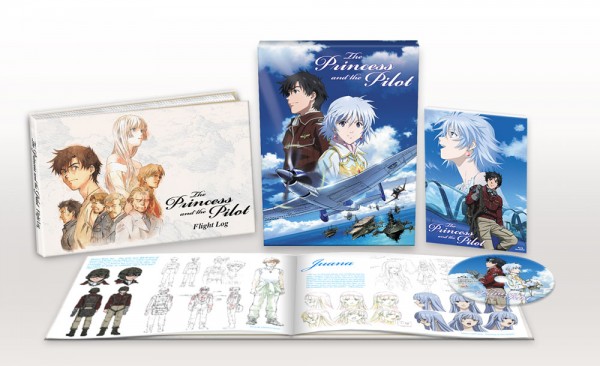 Being a one slim-case package, NIS America has padded the slip-case out with a DVD case sized piece of stiff Styrofoam. As for the art book, the company has went all out by providing multiple page commentaries from the Japanese staff including the Director, Screenplay writer, a Japanese anime critic and a long interview featuring the character designer Hidenori Matsubara who provides commentary to his character designs and sketches.  This is followed by statements from the Mechanical Designer including concept sketches of the planes, statements from the original author and a number of scenery images and art focused on Juana.

Overall
Princess and the Pilot may be rather rudimentary as far as its basic premise goes; however by focusing on only the two main characters and placing them in numerous life and death situations that push them together, the viewer becomes invested in their journey. Thanks to this the all too realistic ending is impactful even if it ends up being extremely predictable and the movie’s poor pacing leaves numerous unexplored pieces of information. Princess and the Pilot handles it’s oft used storyline with grace and couples it with superb visuals and an extremely detailed art book which combined make a memorable, albeit flawed, offering.