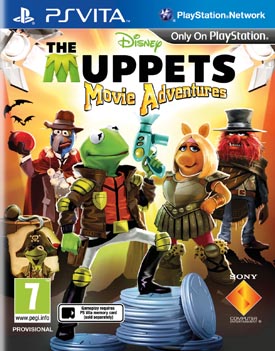 The Muppets have been entertaining kids everywhere for… well decades now. Be it Kermit’s appearances on Sesame Street, to their own tv shows, movies, cartoons and everything in between, the Muppets are everywhere. Well now they are invading your PS Vita with the new The Muppets Movie Adventures. Placing the lovable characters into various film genres sounds like an amazing concept, but the execution leaves a lot to be desired and the game just ends up feeling like a sluggish mess. 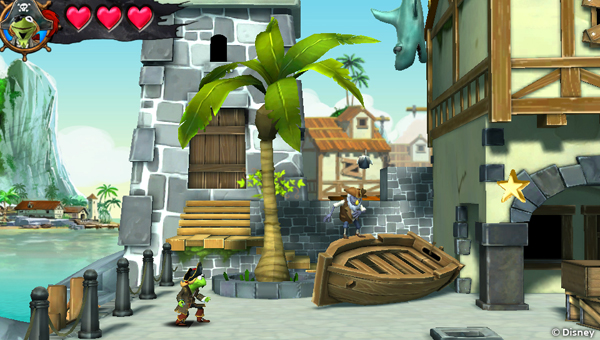 While there isn’t a story per say, each of the game’s five different chapters are each represented as a different film. The first stage has Kermit playing a Pirate in a swashbuckling adventure, while the second has Miss Piggy in a fantasy film. The concept is novel and it would be great to see it fleshed out some more, however there is hardly any context given to the story aside from the brief prologue and epilogue text boxes that pop up, and one or two conversations with NPCs through the game. 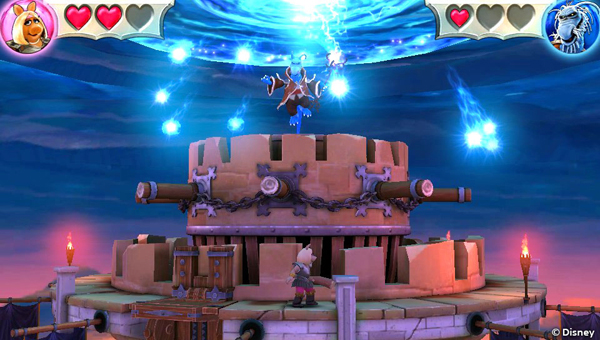 Broken into five stages and rounding out at about 4 hours game time, The Muppets Movie Adventures is a lackluster platformer that really leaves a lot to be desired. Firstly the controls are slow, sluggish and unresponsive. Each stage is meant to represent a different film genre, but they all play identically.

Of all the game’s five stages, Miss Piggy’s one definitely stands out the most. Instead of being a horizontal side-scroller, it uses more of a vertical approach where the world’s most famous pig climbs her way up a tower. Along the way there are moving platforms, switches, door puzzles and a few doors that lead to opposite ends of the tower. It is actually the longest stage in the game, and one that I legitimately found myself enjoying.

Your character has three hearts (with each heart representing 2 hits) and once they are depleted, or you stumble into a bottomless pit, the film’s director will stop rolling and tell you to brush it off and reshoot the scene. Death is not really something to fear though, as not only does it happen quite infrequently (the only deaths I suffered were more a result of the poor controls than anything else) but there is no consequence for it happening. The game saves a checkpoint every few steps so whenever you do die, you will be taken back to at most one minute of game time prior.

The generousness of the saving and the lack of difficulty can be explained away by this being a game designed for kids, but in the end that doesn’t cut it when the game can be breezed through in an hour with absolutely no difficulty curve. 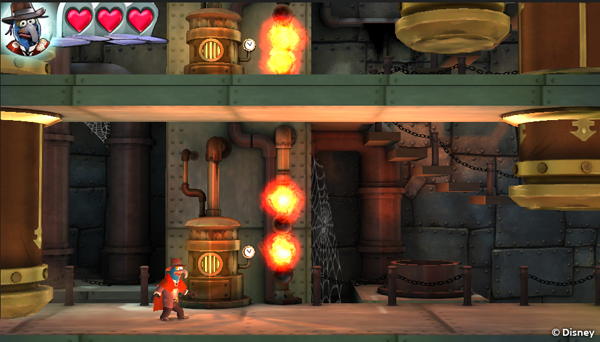 Visually, The Muppets Movie Adventures is not a bad looking game. The five film sets are all very distinct and look great. The game features lots of colour and the inclusion of the majority of Muppets cast really helps the game. Although I will admit that I miss the inclusion of Statler and Waldorf, even if just so that they could share my woes about the game.

This game features almost zero voice acting. The only character that speaks is the director whenever you die, and even he only has about half a dozen different lines total, so he gets repetitive really quickly. With no voice work, the charm of the Muppets just isn’t here and if I’m honest, it stops being a Muppets game. 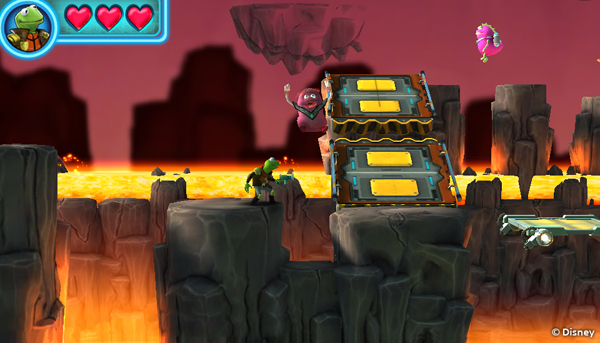 I’d like to say that nothing about The Muppets Movie Adventures is offensively bad, but in some ways it really is. The most offensive part has to be the fact that the Muppets don’t speak or interact with the world in any way at all. Their voice is communicated via text boxes (although there are few of these too) and it really saps the life out of the world renowned characters. The gameplay doesn’t help either, and while it’s ease of accessibility can be explained away by being targeted at kids, that seems like a bit of a stretch and a serious underestimation of kids if that’s the case.

Licensed games tend to cop a lot of flack for being cheap cash-ins and unfortunately Muppets kind of fits the bill here. The game hardly uses the Muppets and seriously feels like they were just added to sell copies. It is sad to see such beloved characters used in this way, but hopefully the next time a Muppets game rolls around, the developers utilise them properly.