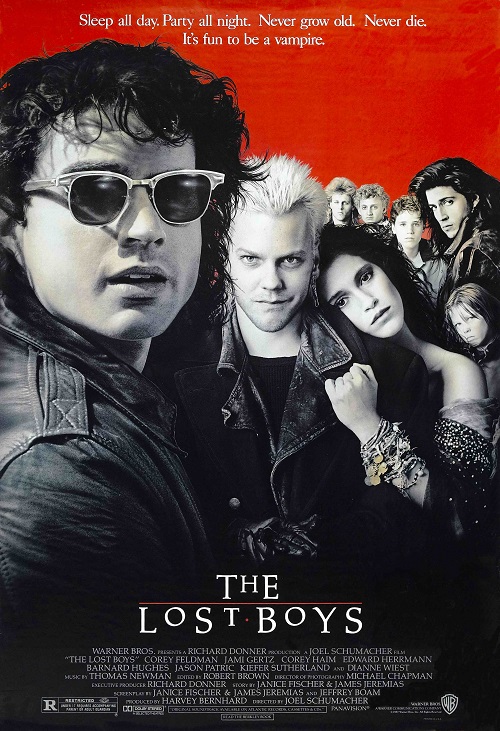 I’ll be honest, I’d never heard of Lost Boys before I saw it on the In the House line up when they announced the new season. Although I skimmed over the synopsis on the Wikipedia page, I largely went into it blind so I could bring you my opinion completely fresh. I was confident that the good people at In the House had good taste in the cult classics they screen and wouldn’t steer me wrong. So I donned my leather jacket and eyeliner and headed on down to George Street cinemas to see what all the fuss was about. 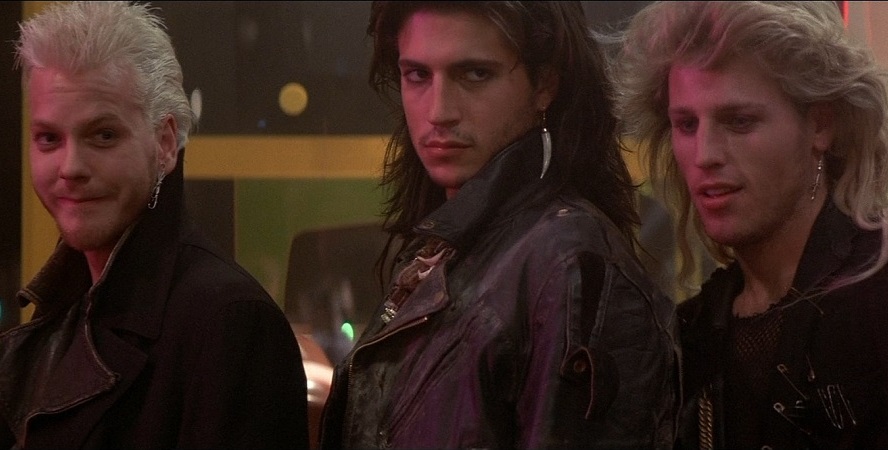 The MCs for the evening were Jason ‘Jabba’ Davis and David ‘Quinny’ Quinn who kicked things off with a quick bit of cross-promotion before sitting down to talk about the film. Said cross-promotion included giving away jetboating tickets for correctly answering a piece of horror movie trivia. After this brief interlude, the two sat down to talk about the film we were about to see. An interesting piece of trivia which stuck with me from Quinny is the fact that the leader of the vampire gang, David, says the name “Michael” over a hundred times in the film. After that, it was time for the screening proper to begin.

The film’s plot starts off with a family moving out to the small beach town of Santa Clara in California. Unlike the wholesome stereotype of small towns in America, this West Coast town immediately sets itself up as a hotbed of seedy behaviour and danger. Into this world steps the young and impressionable Michael who, chasing the approval and affection of peers who egg him on to do more and more dangerous things, ends up inadverdantly becoming a half-vampire. It’s then up to his younger brother, Sam, to use his nerdy know-how to figure out a way to bring his brother back from the brink of undeath.

The story’s actually really straight forward in regard to its arcs with each of the leads set up in the first act and completing their personal arc by the time the credits roll. The older brother realises that there’s more to life than the approval of his peers and the younger brother learns to appreciate the older one. There really isn’t too much that’s groundbreaking in this story which you’d probably be able to guess the narrative direction it follows with ease but there are certainly some excellent bits of writing here and there in the script. Alongside this, I wasn’t particularly impressed with performances by most of the actor’s performances but I’d figure that more as being a fault of the shallow screenplay. 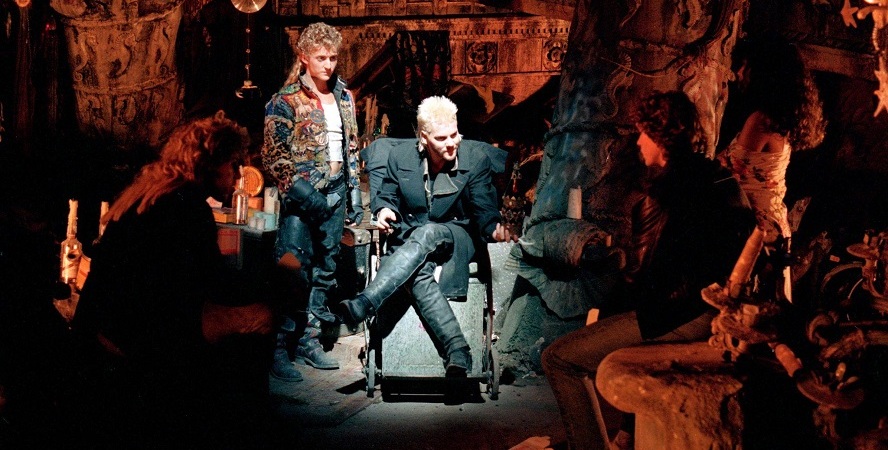 That being said, the stand out performances here are definitely Kiefer Sutherland Corey Feldman as the enigmatic leader of the vampire youths and the nerdy adolescent vampire hunter respectively. Sutherland brings to the role a sort of smouldering intensity which I’d seen previously in Stand by Me and suits him just as well here. It’s easy to see why he was cast as this cast as he carries the role of a teenage punk with ease even if it is a bit one note at times. His performance, nonetheless, is memorable and will stay with you long after you forget his last “Michael”. Feldman on the other hand plays a nerd who is intensely passionate and territorial of his chosen hobby. His over-the-top performance ventures into the territory of delightfully camp and I thoroughly enjoyed it. Nonetheless, both these characters will be immediately recognisable to anyone who has spent any amount of time interacting with teenage boys.

One thing that this film certainly broke ground on and ultimately set a new cinematic standard for is the depiction of vampires as seductive and youthful. It’s hard to imagine vampires as anything but these days but back in the day, they were pretty much treated like most horror monsters as terrifying creatures of the night with a human disguise. There’s certainly examples of that in this film, especially in the film’s ultimate climax, but what really draws people and makes this film so seminal is how it compares vampirism to other rebellious teenage pursuits like drinking and thrill seeking. It grounds the mythology in a much more relateable context and makes being a vampire seem much more fun than just becoming immortal. It’s not hard to see why so much modern fiction involving vampires takes so much from this film. 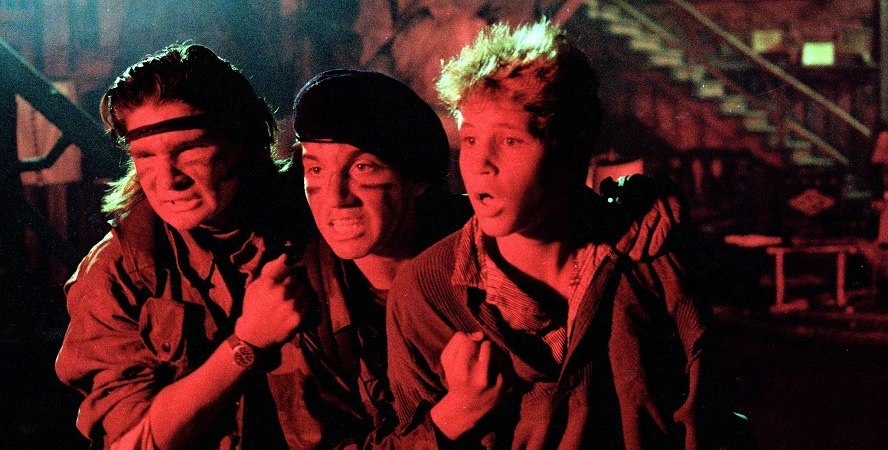 The visual direction of the film does pretty well for a production from it’s time. The special effects are generally all above board and the make up similarly holds its own but there are some flaws which might be noticed by eagle-eyed audiences. One of the special effect sequences gets played out twice with the second one playing out in reverse and although it can generally be looked over, I was somewhat irked by it. In all likelihood, you won’t notice these things but if you do it may mildly annoy you. 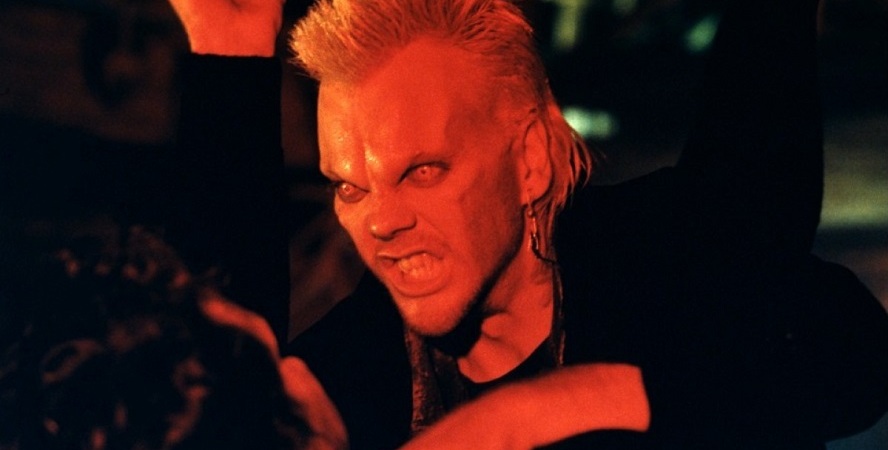 One thing which stood out in this film is the awesome costume design of Daniel and the other vampires. I’ve always had an appreciation for the aesthetics of alternative subcultures like goths and punks and this film does a decent job at showcasing some pretty cool costume design in that regard. Although some elements are no longer fashionable (vis-a-vis, mullets), there’s a lot that they wear which would still be quite trendy in certain alternative circles. I can certainly imagine that pretty much everything worn by these teen vampires would be on the wishlist of many a friend’s “dream aesthetic”.

The music was distinctly 80s with plenty of synth and pop covers besides the standard orchestral score. It gives the film a very upbeat and grungy film but I do feel it does date it somewhat. That being said, it does fit with the film’s overall 80s aesthetic which can certainly be part of it’s charm. One particular stand out for me was a cover of The Doors People are Strange which played during the opening credits and I’ve come to realise probably was homaged in the opening of the True Blood series. 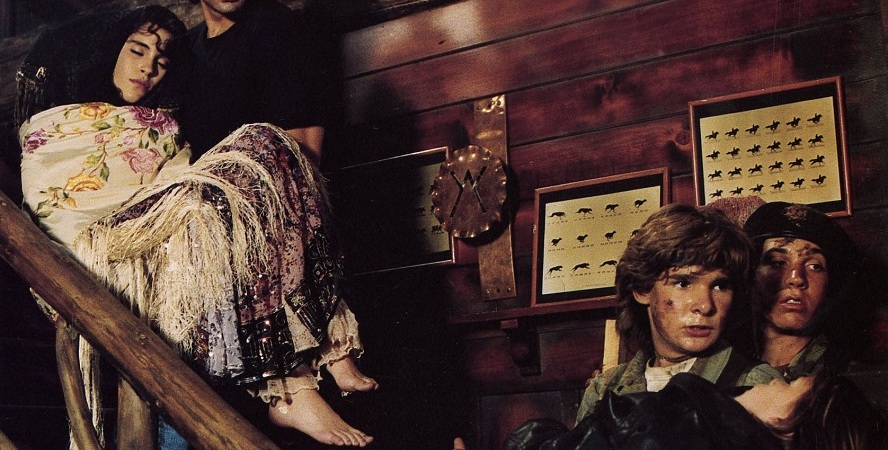 Overall, I had a great time watching Lost Boys and was very glad to have been able to make it to the In the House screening of it. It’s reimagining of what vampires could be like was seminal for it’s time and it is easy to see how, with performances like Sutherland’s, sexy vampires would become a staple. Part of the film’s vampire appeal is the aesthetic of vampire characters which remarkably still holds up as cool even by today’s standards (the mullets are questionable however). The film’s soundtrack features some memorable pieces which will probably leave a good impression on you (and possibly motivate you to find them yourself). There’s a lot to love in this film and I can easily see how this film can become some people’s favourite but as for me: I’d recommend watching it at least once for most film and pop culture geeks to see it’s influence on other vampire fiction.

The Lost Boys is a seminal cult classic which features some great performances and completely revamped pop culture's image vampires to what it is today.
8