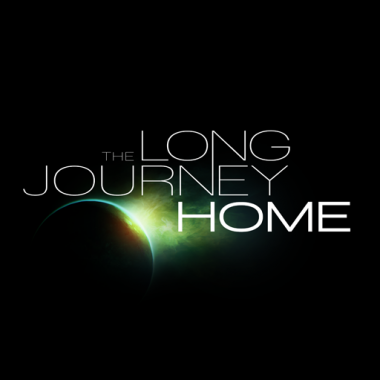 The Long Journey Home is a space RPG that sends players on an epic adventure to return home after being stranded on the other side of the universe. To get home, players must navigate the waters of alien diplomacy, extract resources from planets for fuel, and do their best to patch up a ship that is quickly falling apart. The game takes some inspiration from rogue-like games, encouraging replayability with a procedurally generated universe, permadeath, and two novels worth of dialogue to discover.

The Long Journey Home does not spin a story in a traditional sense. Each playthrough is its own story of survival, but it’s not particularly interesting in its own right. The premise is always the same and the ending is usually pretty predictable due to the game’s permadeath mechanic. Instead, the writers at Daedalic has focused their effort in crafting massive and detailed lore. The universe is packed with many unique alien races to discover. Each have their own culture, motivations, and relationships with other species. Players cannot endlessly chat with individual aliens. It is always made clear that the individuals encountered have lives of their own. Players can tease little bits of information from every conversation, slowly filling out the picture of each alien race. One thing that bothers me about the aliens is that each “individual” alien is often indistinguishable from another unless they hold some important role. They feel like they lack individual personalities. I find it to be rather problematic on a social level, as for the most part, the alien characters encountered are reduced to exaggerated stereotypes of their respective races. 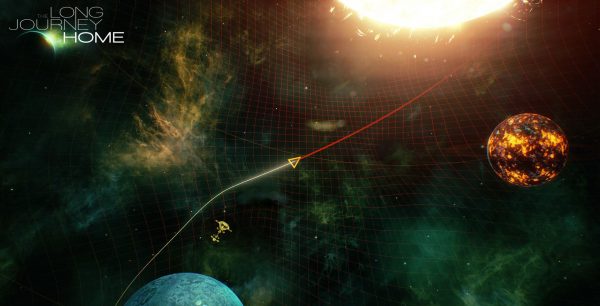 Luckily, the human crew is treated with a little more finesse. Players pick four crew members from distinct backgrounds. As the player navigates the universe, crew members will weigh in on the current situation, make suggestions, and carry on short conversations with one another. I find there is not enough conversation for a player to develop a deep attachment to their crew, but there is enough to see each individual’s personality shine through.

The Long Journey Home’s indirect method of storytelling is not for everyone. While Daedalic does a fantastic job of creating a grim and somber game punctuated with moments of levity, the randomly generated nature of the game and the focus on exploration means the pacing of game is slow and feels a scattered in multiple directions at times. Even if a player is able to get their crew home in in their first playthrough, it will still take multiple playthroughs to experience the game’s full lore. This is not a game for a person looking for a tightly directed experience or a story that ties up with a nice bow. The Long Journey Home is for the sci-fi fan who wants to experience massive worlds and is willing to put in the effort to do so. 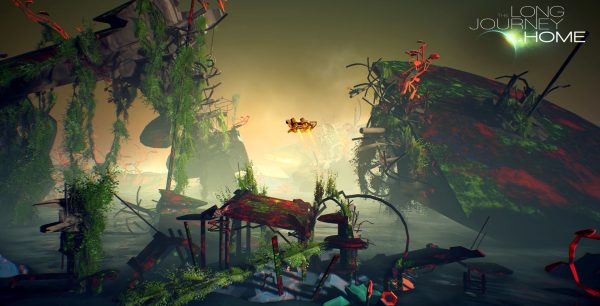 To start a game, players must assemble a crew of four astronauts. Each character comes with there own special skill and one item they are able to bring on board. The item can be of immediate use for repairs, can be pawned off for credits at a later time, or may have a mysterious use that must be discovered through experimentation. Next, players can pick their space ship and landing craft, with three options for tough, agile, and balanced stats. Players can opt to generate a random seed or input one shared to them. The Long Journey Home currently has three vaguely named difficulty levels that vary how quickly ships degrade, tweak general mission difficulty, change resource levels, and provide options for rewinding time.

The tutorials in game are extremely basic and a bit inadequate. The developers released three videos on YouTube that serve as the game’s true tutorial. These videos are absolute must watch to understand the game. Honestly, I have no idea why they are not included in the game itself. 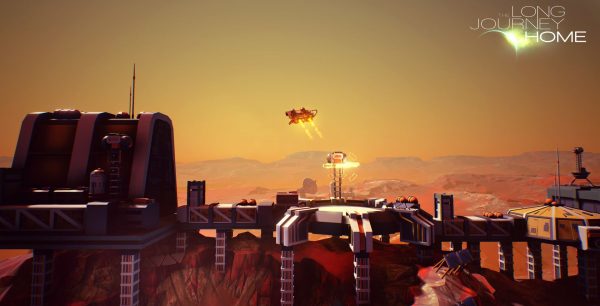 The bulk of the player’s time in The Long Journey Home is spent flying from planet to planet in the solar system view collecting enough resources to keep the ship fueled up to travel towards Earth while fighting off the inevitable wear and tear. Don’t let the top down camera fool you, The Long Journey Home has an incredibly tough flight system that takes a lot of practice to master. The game’s flight system accounts for Newtonian physics and planetary gravity. With limited fuel, players need to learn to use their engines and boosters sparingly to get to their destination and into orbit. Mastering the flight system comes when the player is able to use the gravitational pull of celestial bodies to slow or accelerate one’s ship without burning up precious fuel. My only concern with the solar system view is the poor mini-map. The mini-map is a bit vague and a lack of legend results in a bit of trial and error until all the meanings behind the colours and icons are memorized.

To repair the hull of the lander and space ship, to refuel the jump drive, and refuel the engine, players will need to regularly land on planets to extract metals, minerals, and gases. Landing on planets also comes with the added benefit of encountering random ruins, which can provide players the opportunity for loot and misadventure. The planetary lander portion of the game is very much a modern take on the classic arcade game Lunar Lander. Players need to angle their lander and its static thrusters to guide the craft. Each planet has its own environment, posing different challenges like gravity levels, winds, and electrical storms. I found the planetary lander gameplay to be less entertaining and more repetitive feeling due to the higher level of micromanagement the lander needed and how punishing a badly generated planet could be. Normally, a planetary scan from orbit should warn a player of any serious danger awaiting a player, but sometimes a harmless planet could become deadly with a poorly generated landscape that dropped a high piece of land right in the spawn path of the lander. 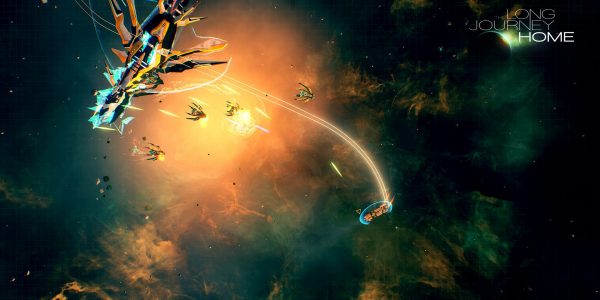 Players will spend some time in their space ship navigating asteroid belts, exploring wrecks, and interacting with other ships both peacefully and in combat. Like the solar system view, it is a top down affair here. The controls in this mode should be the most familiar with gamers, as players simply need to point in the right direction and hit the gas. Combat is a bit like old naval battles, with the player needing to maneuver their ship alongside the enemy to fire a full broadside of cannons. Alternatively, players can opt to flee by trying to put a little space between them and their attacker and try to exit the map. While it seems a bit simple, combat is actually quite a bit of fun as the constant worry about fuel and hull integrity forces players to be a bit more careful.

The final major component of The Long Journey Home is the survival RPG mechanic. Scavenging resources will almost never be enough alone to make it home as player error and game time takes its toll on the ship, the lander, and its crew. Players will inevitably have to wade into the diplomatic sea of alien life as they make friends and enemies with different species so they can get access to the necessary gates and credits to jump from galaxy to galaxy. The slow (or sometimes fast) slide into desperation can put players in some uncomfortable situations where it is no longer a matter of keeping the ship in tip top shape, but trying to triage and solve the most pressing problems. Errors here will have long term effects elsewhere. For example, opting to repair a broken pilot ejection seat instead of a jammed lander thruster engine will have long and frustrating consequences. Even at its easiest, The Long Journey Home is not a forgiving game and requires a certain level of masochism to enjoy. 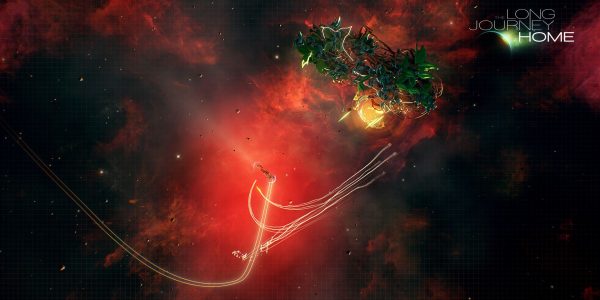 The graphics in The Long Journey Home are excellent. The art style generally is a bit on the cartoony and colourful side, which adds a bit of levity to an incredibly grim game. Each alien race has their own unique style, from their ship design to their body types. On the technical side, the basic graphics options are available for tweaking. In my testing, I did not run into any issues with the game.

The Long Journey Home features a solid audio presentation. While the game lacks any real voice acting, the game’s sound effects are enjoyable. The soundtrack is fantastic. Even at its tensest moments, there is a restrained somber feeling to the music that fits the game’s themes well. The music plays a major role in setting the game’s grim mood, and I think is integral to the storytelling. 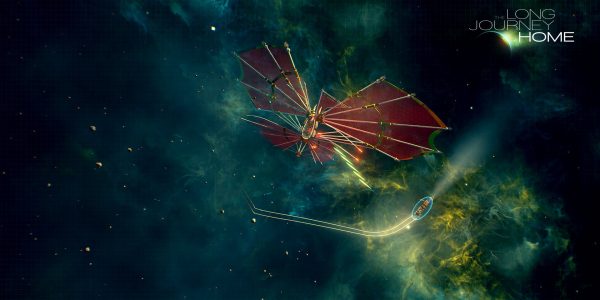 The Long Journey Home is a grim and somber game that requires a certain personality to really appreciate. It pulls together some neat, arcade-style game mechanics with a growing desperation set in a vibrant universe of alien life. Many will find the game to be a bit tough to learn, a bit on the punishing side, and even a little repetitive at times. But those willing to tough it out will be rewarded with a fantastic universe of desperation, hope, and amazement.