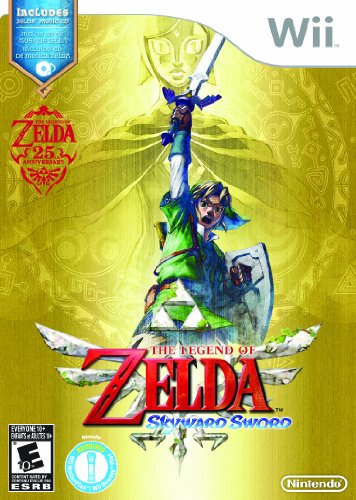 Overview
The Legend of Zelda: Skyward Sword is easily one of the best Zelda games ever made. The title is one massive adventure that goes from beautiful locations to unique locations at every path. The game has a magnificent scope, a variety of quests and a very memorable cast. All of these elements go together brilliantly and form one of the best games ever.

Story
The Legend of Zelda: Skyward Sword has a very well written and excellent story that blends the best parts of previous Zelda experiences and has a very similar feel to watching an anime series, which is not a detriment at all. What was particularly interesting was the direction that the story proceeded in. While it is a typical heroes journey style story, the way the characters interacted, the way the world changed around them and the way that the quest was presented within the story was a truley unique experience.

What was particularly interesting with the story in this game was the way that it casts light on the origins of both the Master Sword and potentially Hyrule itself. In Skyward Sword, the world is set in a pre-Hyrule state, which means that humans have not yet created a kingdom upon it’s soil and renamed all of the locales. This means that over the course of your journey, you will have minimal amounts of human contact while on the surface world, while having wholly human contact in the land of Skyloft. Even though you will have negligible contact with other humans within the bulk of the quest, the variety of creatures that were present in this pre-Hyrule world all have their own interesting characters that interact and assist Link in his quest to save Zelda. I mean, really, the characters are what make the story interesting and without them, it’d just be a green dude running around to save this girl for next to no reason. 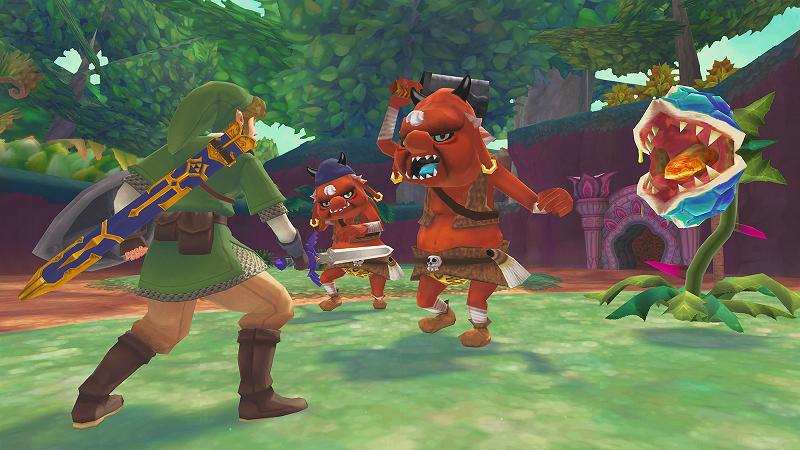 What’s even more interesting in this title is the use of time travel, as not only a gameplay element, but a storytelling one as well. In the title, there are various uses of time travel help to establish the origins of some of the stories more predominant figures, as well as a way of increasing drama and tension within itself. It’s really hard to talk about this story element without getting spoiler-y, but it plays a huge role in Links quest, and is also behind a driving factor and motivation for a large portion of the game.

The biggest story element in this title is most obviously the Master Sword herself. The character/device has been on display since the game was announced, so it was obvious that this time, it’d be playing a large role in the story. The thing about the Master Sword in Skyward Sword is that it raises questions about the future of itself. It is highly likely that the Master Sword in this game is the same one as in the future, yet, it’s primary inhabitant and personality, Fi, is never mentioned in any Zelda game further down the timeline (assuming there is one). Fi’s story within the game is one that many players will probabaly overlook, but, it is also one of the most interesting – assuming you pay attention to it. It is also a point that raises much speculation about, not only the Master Sword, but the origins of the Zelda Universe itself.

Of course, the last main story piece I want to talk about is the Story of Hyrule itself. In this game, Hyrule has not yet been united by the King (This happens a decade or two before Ocarina of Time, if I recall correctly), so it is a land separated by earth and sky. The Goddess and the evil Demise had a war at some point in this lands history and because of this, the Goddess sent all humans up into the sky to live peacefully until such a time arrived that the chosen hero would be able to come down and save the world. Because of this, the world has a small handful of ruins and religious temples that all take a large role in the story. What’s more is that there are still godlike creatures living amongst the soil, who have been appointed by the Goddess herself to aid the hero in his journey. Unfortunately, for gods, they seem to be weakening and at least one of them is dying. 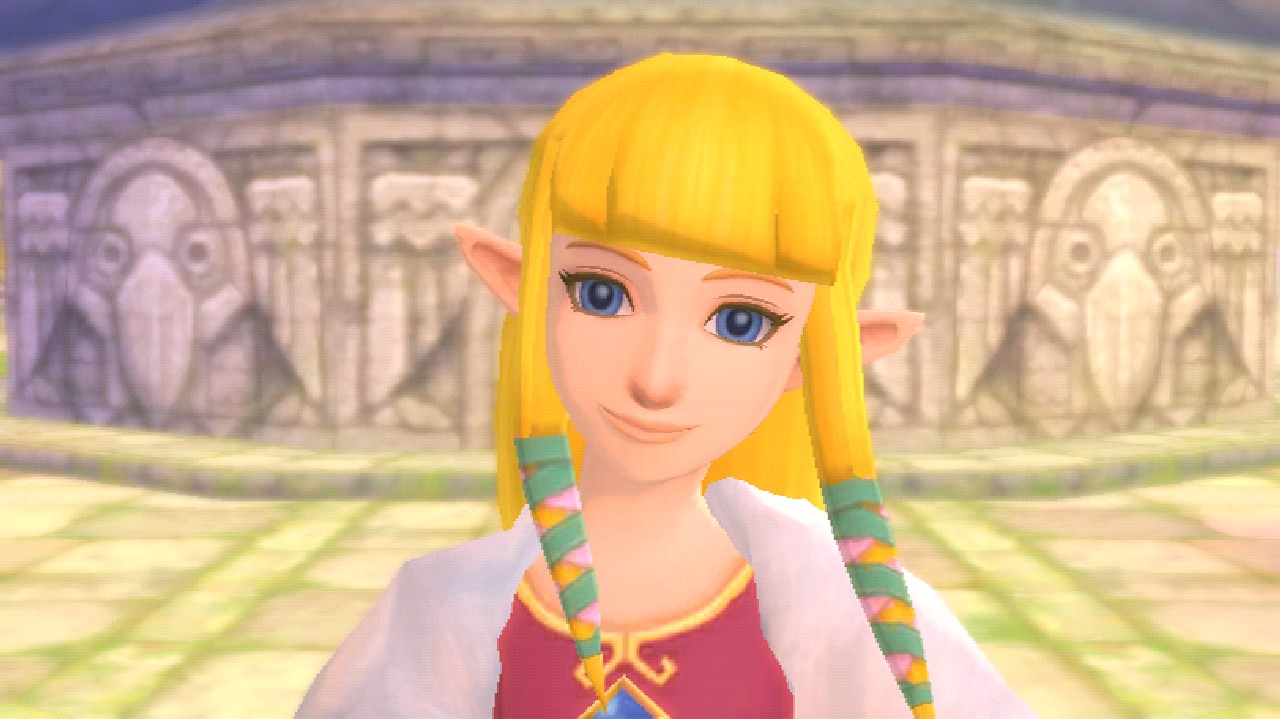 One of the best examples that showcase the history of the land, is the section of land that houses The Imprisoned. Lined across the walls of the earth are some rather striking pieces of art that seem to showcase some kind of historical account of the world. One could easily assume it is the story of how The Imprisoned was imprisoned, but, the art is the same 1000 years before your first encounter with him. Further, the look and design of the temples within the game, as well as their technological backgrounds, add further mystery and food for thought as to the origins of the land, and the story. Who was this Goddess, was she some kind of God? Or was she someone really good with technology? What does this mean for the future of Hyrule, is all other magic just a form of misunderstood technology?

The story of this game casts so much doubt on what we believe to be true in the previous Zelda games, while also telling a gripping tale of its own.

Gameplay
The easiest way to discuss the gameplay of this title is to suggest that it is very similar to previous 3D Zelda titles. I mean sure, there are a few enhancements, but why change the fundamental gameplay characteristics if they aren’t exactly broken? However, I will say that this is probably one of the most fun Zelda games to play, and the way that many items interact with the Wii Motion+ really enhances the overall experience of the game.

Skyward Sword is a behind-view third-person action/adventure game with very puzzling puzzle elements. I know that you can make a case for saying that this is actually an RPG, but, the decisions that you scantily get to make that isn’t deciding to move in a fashion to get you to a goal do not affect the world all that much. Sure, interacting with certain characters a certain way will get them to say a different line of text, but there isn’t much difference, storywise, as to what you say or do to them. Another argument that one can upgrade their weaponry and items within the game. But I counter with the fact that upgrading them only makes them cooler, but they still have no bearing on choosing how the world reacts to your presence that much more. 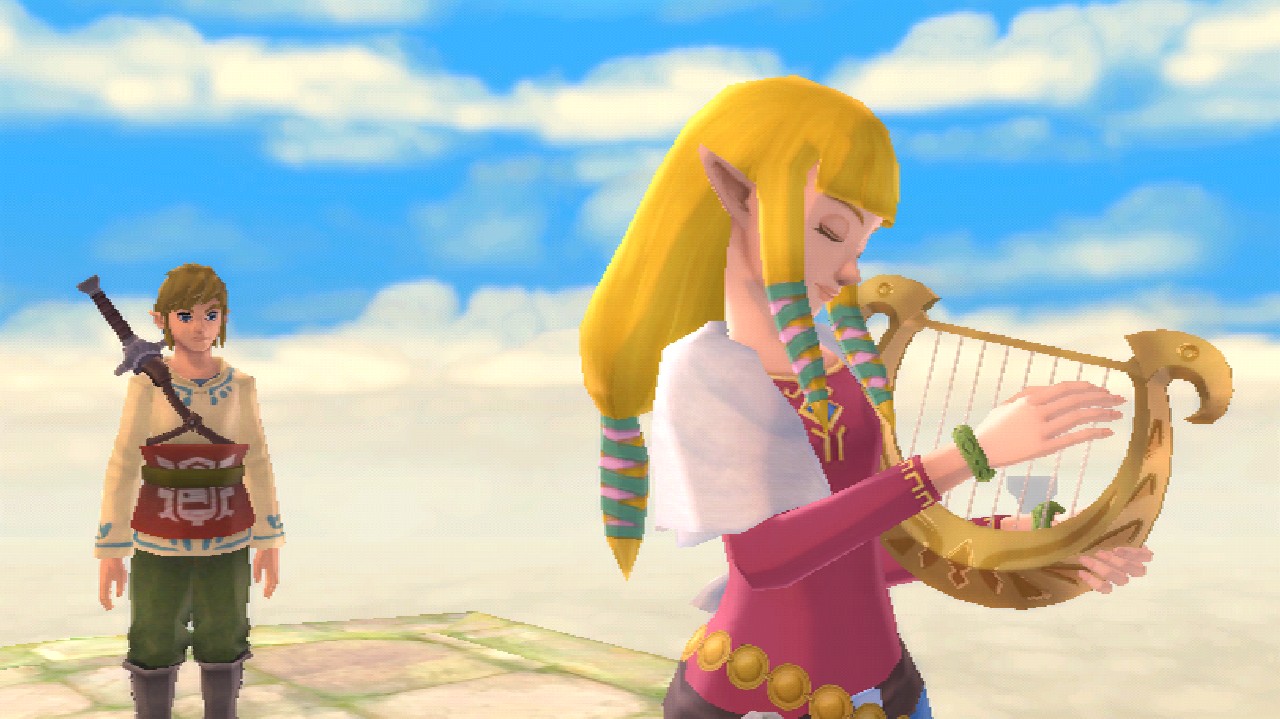 What’s even worse with the crafting system is that I found it incredibly hard to get the materials that I needed to fully upgrade my items. This isn’t a detriment to the system though, as players who enjoy collecting obscure items will be greatly rewarded and this is even more enhanced by the bug collecting system within the game. THE BUG NET IS PROBABLY ONE OF THE MOST FUN ITEMS TO PLAY WITH IN THE GAME!!! So is the beetle, especially when you upgrade it so that it can carry bombs.

The Beetle is an item, not an insect, that you obtain in the game and is also the best example, that isn’t the bug net, of the Wii Motion+ controls within the game. By using the Wiimote as a stand-in for the beetle, you can manipulate the in game beetle by using your wii remote as a basis for its movements. I personally found that holding the Wiimote like a pencil was the best method of control for such devices in the game. This also holds true for the birds that you fly whilst in Skyloft.

The birds, like the boat in Windwaker, are the primary method of transportation by the humans living in Skyloft. You, as a human from Skyloft, also have your own bird. Controlling the bird is as simple as tilting your Wiimote around as though the tip of it is the birds beak. As I previously mentioned, I found it much easier to control whilst holding the controller like a Pencil.

Swordfighting. This game has a huge emphasis on 1:1 movements with the Sword in the game. Fortunately the controls are quite responsive, except for when they are not. There were a few instances, not that many but all were crucial, where the controller would not responds correctly to my movements. Overhead vertical, turns into a horizontal strike from the left. Even worse is when you’re trying to block and the controller reads your subtle movements as sword strikes. So yes, the controls are accurate, just they sometimes are misread by the Motion+ sensor, which is a shame.

Is the Motion+ “enhancement” justified? No. But does it add a level of fun to the game that would otherwise be missing? Hell Yeah! And fun is the most important aspect of gaming.