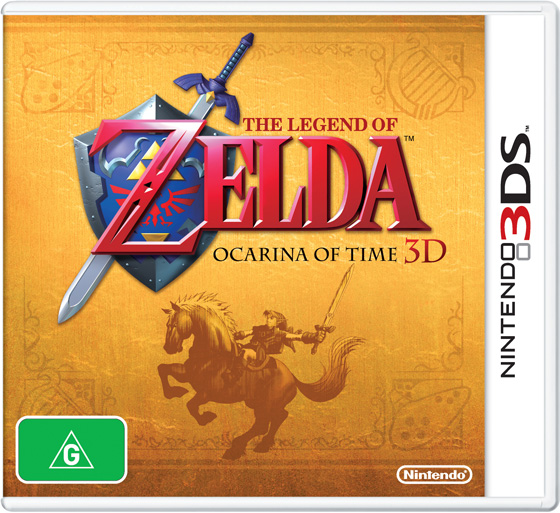 The Legend of Zelda Ocarina of Time 3D

Let me preface this by saying that this rebuild of Ocarina of Time is probably going to be the defining build of Ocarina of Time for a new generation of gamers, much like how the original build was my own. The game is identical to the original version in most regards (it even retains some of the old glitches), but has undergone a massive graphics and controller overhaul. Visually, I’d wager that this version of the game is the most superior out of all previous offerings (Twilight Princess included), simply because of the increased graphical output of the 3DS as well as the revamped models, textures and animations all being output in glorious 3D. As a Zelda game, nay, a video game, Ocarina of Time 3DS is one of the greats.

Visually The Legend of Zelda Ocarina of Time is a treat to behold. The game integrates the existing Ocarina of Time framework into an updated visual feast that is still able to retain the charm of the originals style. Even though it’s easy to say the graphics are good when comparing it to the original title (which appeared on the now ancient Nintendo 64), the graphics are still very comparable to modern games even while retaining the Ocarina of Time style. This means that all the models, textures and other stuff have all had a visual overhaul. Players will not be disappointed visually by this game. 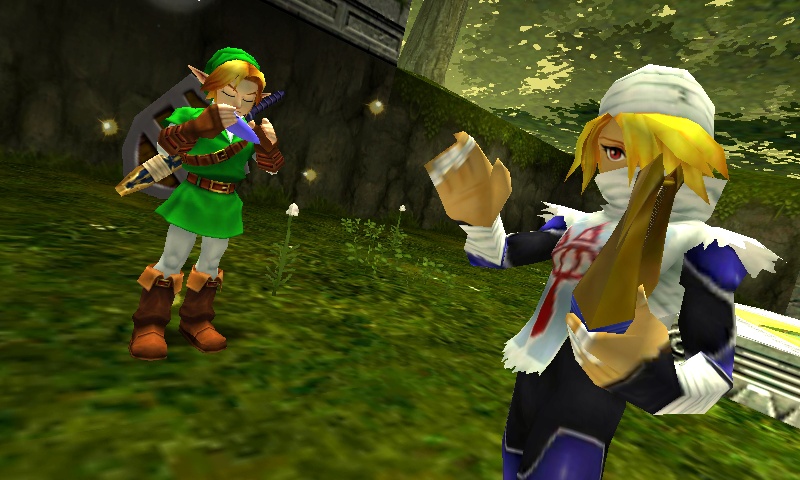 While on the topic of graphics, I feel as though I need to point out how well the 3D works with this game. Ultimately, whether you play it in 2D or 3D is up to you with this game. While there are definitely benefits to playing it in 3D, such as having a better perception of depth and a much sharper looking picture, there aren’t really any sections that are built specifically to be viewed in 3D. The existing game certainly benefits from the added dimension, but really, adding extra bits to the title to make extreme full use of the 3D is silly. The game just isn’t the type of game that would be welcoming to having unnecessary 3D added to it, everything is already awesome and players would be able to tell if these elements were tacked on.

So in the end, the graphics are awesome, the 3D enhances the awesomeness without compromising the games integrity and all is right with the game.

Does this really need a section? I mean, honestly, everyone knows that Ocarina of Time easily has one of the best soundtracks of any game. And with the addition of the 3DS’ surround sound output, the audio comes to life in an even greater way. Like really, the Nocturne of Shadow literally gave me goosebumps. The quality of every tune in this game is high. From the songs available for players to play via their in-game Ocarina to the background tracks in each zone, they’re all incredibly memorable and highly enjoyable. I mean, who hasn’t found themselves whistling the overworld theme or one of the Ocarina melodies at some point (I think this one applies more to players who grew up with Ocarina, but it will apply to newcomers shortly)? 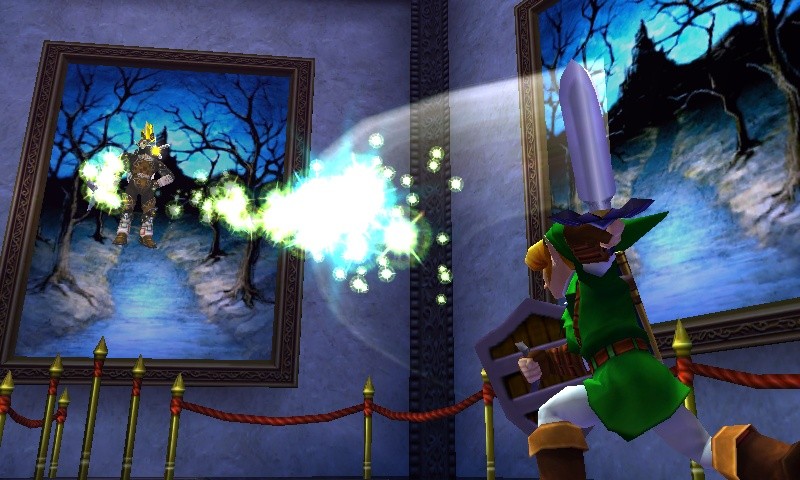 All of the sound effects in the game have been nicely implemented in this game, with everything sounding similar to how they did back on the Nintendo 64. Now, this may sound kinda dodgy, but I assure you that nothing sounds out of place and it all works and fits very nicely.

Seriously, this is one of the only titles that I would suggest to people play based solely on the soundtrack. Pick up the game and enjoy it!

The story itself is basic fantasy fare, with an evil bad dude, a princess and a selfless hero who must do battle at some point to determine the fate of the land. But, what really sets Ocarina of Time apart from the typical fantasy story is the way in which all the supporting characters are utilised throughout the game. I mean, sure some of them can feel a little shallow (especially if you didn’t bother exploring), but honestly, who didn’t fall in love with Malon (newcomers, you will)? Who didn’t think that Ruto was a spoiled brat? I certainly got the impression that Nabooru was a little cut-throat and was certainly upset by Ganondorf’s evilness. Sure the game tells a story of a hero who has to save a world, but at its core, it’s a story about the characters. And that is why I truly believe that Ocarina of Time has had the lasting appeal that it has.

Ocarina of Time retains the classic 3D gameplay of Zelda games previous. So that means, automatic jumping when running off a ledge, solving puzzles (which generally involve you doing stuff to get somewhere else), pushing and pulling blocks and of course combat.

The best part of this games gameplay is how the touchscreen is utilised within the game. While the old control scheme of C-Down, C-Right and C-Left for items is removed, you can access the inventory via the touch screen and assign items to X and Y as well as two hotkeys on the touchscreen. Remember the Water Temple? Remember constantly hitting start to switch your shoes? Be frustrated no-longer! Assign the boots (that are now an item, as opposed to wardrobe option) to the hotkey and whip them out as needed. Honestly, this is the best addition to the game because of this example. While it’s a good implementation otherwise, with the Water Temple it becomes a thousand times better with it and therefore makes the entire game better because of it. 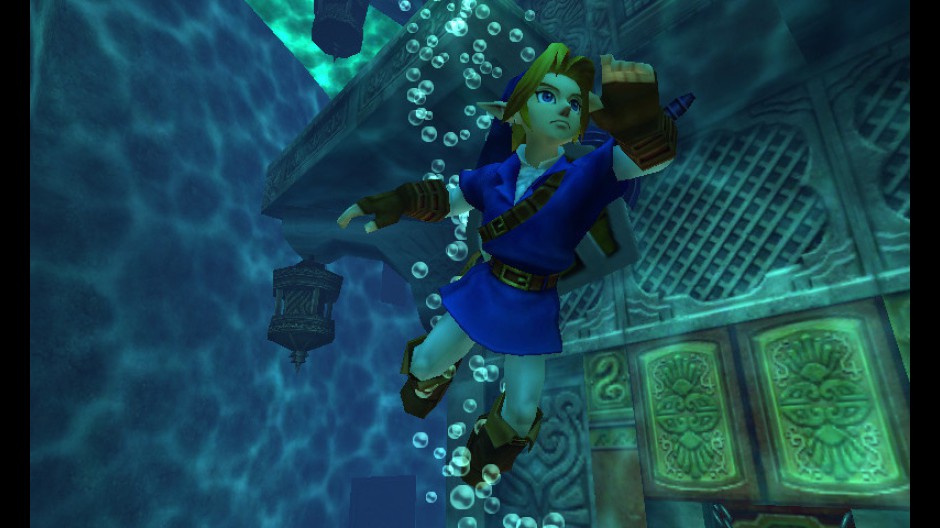 I also really liked how all of the start menu from the N64 version is now layered across the touchscreen, it makes doing things quite seamless and easy to manage. No more pressing start and flicking between screens to access the information or item you want, now its just tapping a tab and selecting what you want. It’s very intuitive and adds to the comfort of the game.

While the gameplay may sound really good up until now, I must also remind you that some of the glitches found within the original Ocarina of Time are still present in this game. For me, this was a nice bonus, as I loved having the nostalgia of running these glitches again (99 gold skulltullas anyone?), though sadly, some of them were fixed for this version. There’s one other thing in this game that is a maybe should have been changed is that when you start the game after saving, you don’t come out of the last building you entered (like some past Zelda games), you instead go back to the Kokiri Forest if you’re a Kid or the Temple of Time if you’re an adult. This isn’t too bad as it doesn’t take too long to adventure to where you last were and you still stay in a dungeon if you were in one. The original Ocarina of Time was like this, so I guess they were keeping the game as identical as possible.

What I really liked about this game is that it has some hidden stuff as well. I’m not too sure about how much there is, but I found a hidden picture of Link doing a spin attack behind some boxes in Gerudo Valley (which, in my opinion, has the best theme in the game). Keep a look out behind a few boxes there. Another thing I loved was the inclusion of a boss-fight mode. This mode allows you to go back and fight any boss in the game while also keeping a record of your time against that boss, it is incredibly fun to play through! Lastly, the last thing I enjoyed was the inclusion of the Master Quest. It’s the entire game with the world flipped and the dungeons layouts changed. It increases the play value of the game exponentially while adding an additional challenge to players. 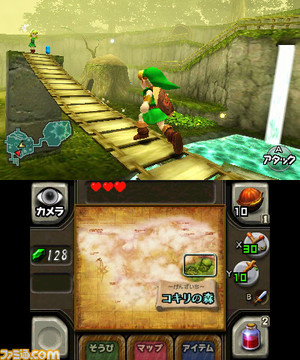 The gameplay is a solid part of the Ocarina of Time experience and is definitely the second main player of it’s lasting appeal and overall greatness. Fans of 3D hack and slash style games (like Fable or The Witcher 2) will definitely feel at home with the combat here. Fans of puzzle games will love this game for some of it’s frustrating puzzles (especially in Master Quest mode). And lastly, people who love a bit of difficulty in their games will love this title. The bosses can be a pain, the Master Quest mode is certainly way more difficult than the original quest (and is unlocked after beating the game for the first time) and as any fan can attest, some of these dungeons can be a bit tricky.

The Legend of Zelda Ocarina of Time is not only a great remake, but also a great game that has very obviously withstood the test of time. Gamers new and old will now have the opportunity to play through one of the most epic games of all time.

Not only will they be able to play one of the greatest games of all time, but they will also be able to play the superior version of that game. This 3DS title is a must have and if you are to buy a 3DS and only have one title on the system, let it be this one as it is easily the best game that will ever be released on the system ever (okay maybe not, we’ll let time test that one, but for the moment anyway). In terms of value for money this is essentially two games in one, with the second being a significantly harder version of the former, which is a huge plus in terms of value for money.