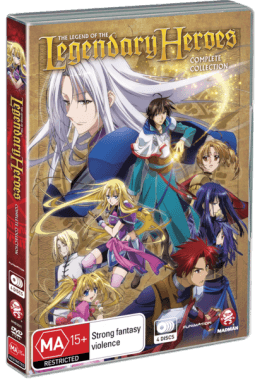 Originally released as a light novel series written by Takaya Kagami and illustrated by Saori Toyota back in 2002, “The Legend Of Legendary Heroes” proved popular enough to earn itself an anime adaptation which hit the small screen in July 2010 on the “TV Tokyo” network. This series happens to be one that piques the interest of many fantasy fans seeing as the original release spawned countless more releases across many different mediums including anime, manga and light novel. The series even got itself a video game which was released on the Sony PlayStation Portable across Japan in 2010. From the information Now, in the year 2014, we’ve been met with a Western release of “The Legend Of Legendary Heroes” thanks to “FUNimation” and “Madman Entertainment”. Let’s go on a journey to see whether or not “The Legend Of Legendary Heroes” can truly stand against time. 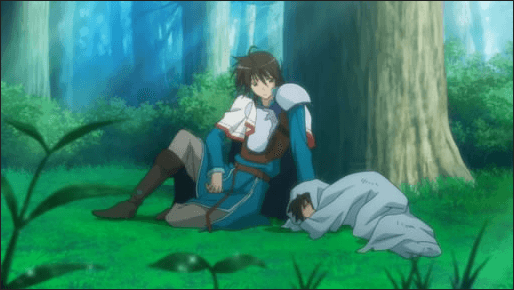 “The Legend Of Legendary Heroes” follows the story of a young man named Ryner Lute – one of the most powerful magicians of the time – as he journeys the land with his gorgeous companion Ferris. The two have been ordered by their king to search for a certain destructive weapons called “Heroic Relics” which, if brought back to their homeland of Roland, can essentially mean the end to an almost lifelong struggle between all the kingdoms of the world. The story almost works like a double helix; crossing at certain paths but mostly separate. Audiences follow Ryners quest as he searches for the relics but we also follow Sion, the best friend of Ryner and the current king of Roland, who is constantly fighting off political assassinations and doing all in his power to unite the country peacefully. I did enjoy that style of storytelling where, for the most part, the two men were separate from each other, both doing the things they need to do while also both learning more and more about themselves with each day that goes by. 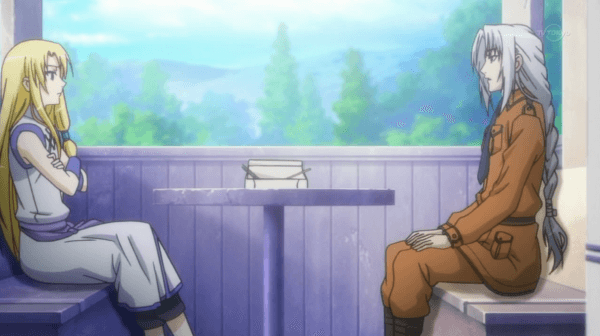 They often come together at critical moments in the story to work things out and I feel as though not many anime series’ do this and it’s a great way of a telling a story of its kind. Unfortunately…the series has major pacing issues which makes watching it incredibly monotonous. Had the story and the overall pacing been refined I probably would have enjoyed my viewing experience but instead I almost detested it. The two main characters, Ryner and Ferris, had two incredibly infuriating quirks that came up at least five or six times each episode and it got to the point where hearing the words “Dongo” (a Japanese sweet) and “Nap” made me physically angry.

In my opinion, the quirks did nothing for the characters and actually didn’t very much suit them so I’m not sure as to why exactly those were the ones chosen. The simple fact that the series was based in an obviously European-inspired world yet Ferris continued to speak about a Japanese treat is something I find incredibly stupid. “The Legend Of Legendary Heroes” has a comic style about it that doesn’t exactly land all of the time. Most of the jokes are visual, slap-stick ones that don’t make the characters seem cool, quirky or real, instead it makes them seem…odd…and ridiculous. By the end of the series the story actually gets quite interesting, moreso than when it started, but it also gets oddly convoluted. It’s tough to say something this harsh but, had the series been in the hands of a more capable studio/team, It would have actually been a good one. 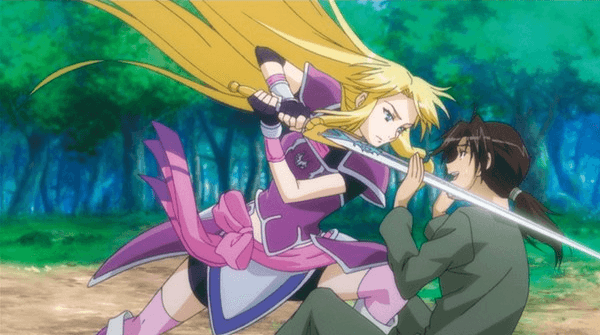 I feel as though using the excuse that an anime is dated has lost all of its power. “The Legend Of Legendary Heroes” WAS developed and released four years ago back in 2010 and anime, much like video games, does not age that well. Unfortunately this series is nothing like wine, instead it aged more like milk; four years later and the taste left in your mouth is not that of a good one. My original excuse for why “The Legend Of Legendary Heroes” had quite low visual quality was simply because it was old but after researching the year in which it was made I soon realized that, even back then, it would have still been considered fairly bad animation-wise. With series’ like “Sengoku Basara: Samurai Kings”, “Highschool Of The Dead”, “Panty And Stocking With Garterbelt” and “Durarara!!” – all of which host high-quality animation – it is clear that the technology to create high-caliber animation was available.

Saying the entire artist style of the anime was “bad” would be an untrue statement, for the most part the anime is visually nice but my appreciation for it mostly lies within both the costume and environment design, as for colouring and facial design…well that’s another story entirely. Every character looks a great deal younger and a great deal “softer” than I believe they should have, it was hard to believe the typical “manly man” character was so because he looked to be a young, girlish, teen instead of the muscular, gritty, man he was made out to be. It almost looks like, and I apologize for stereotyping, the characters were deigned for young girls but the scenes of bloody murder and horrible death showed otherwise which makes me thing the series wasn’t targeting young, female, teens. As mentioned; I did enjoy the way costumes were designed, they were realistic enough to give off the proper vibe but also extravagant enough to allow for audiences to get a sense of wonder and fantasy. 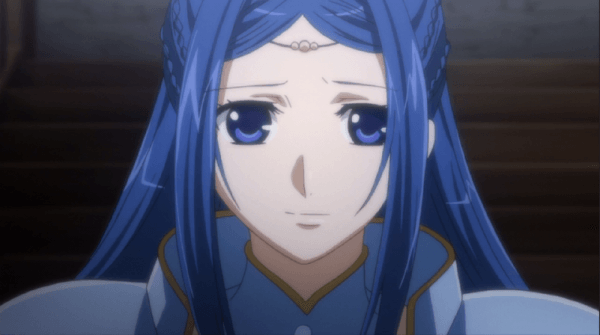 The anime was localized by “FUNimation” – a Western anime publisher/distributor that is known for its brilliant choices in English voice actors for Japanese anime – and, once again, they did a great job at choosing an English voice cast. While there were a few characters that had incredibly annoying voices, the majority of them were voice acted impressively…it was not the casts fault that the script was written so, let’s say, unattractively. With industry greats like Ian Sinclair (Dandy “Space Dandy“, Brook “One Piece” and Toriko “Toriko”), Luci Christian (Nami “One Piece”, Ringo “Air Gear” and Medusa “Soul Eater”) and Christopher Sabat (Zoro “One Piece”, Armstrong “Fullmetal Alchemist” and Elfman “Fairy Tale”) on the series’ side, it’s a hard to go wrong.

Characters often say a great deal of useless and silly things that not only seem unnecessary but childish, unfortunately this made the voice cast seem less talented than they really are but there are certain scenes where they really get to shine and they do so like gargantuan diamonds. Musically the series is real basic, there aren’t a great deal of tracks and the ones that are present aren’t usually that great. That fit the series well, that’s for sure, but I feel like a lot more work could have been put into making the soundtrack more memorable. It’s fantastic that the decision to add ageless instruments like piano and harp was made but, as mentioned, it could have been done so much better. The way I see it; if the soundtrack isn’t memorable after 24 episodes…it’s not a great soundtrack. 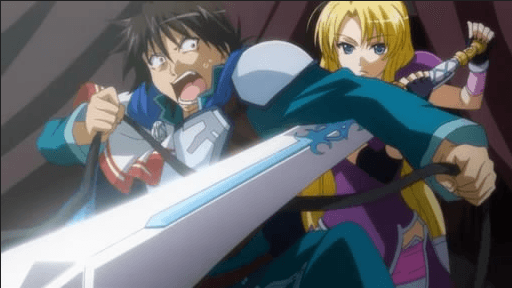 Apart from about a handful of episodes with commentary tracks, the “Legend Of Legendary Heroes – Complete Collection” release is fairly lacking in extras. It’s only understandable seeing as most anime releases come with little or no extras but it’s always nice to get a little more for your money, especially when you’re paying big bucks for anime. Luckily the voice cast have a pretty good sense of humour because they really lighten up the mood of the episode commentary and makes it entrely worth watching but if you’re looking for a release with plenty of extras, this isn’t the one for you.

It’s tough to say something this harsh but, had the series been in the hands of a more capable studio/team, It would have actually been a good one. “The Legend Of Legendary Heroes” does a great deal right, it definitely fits into the saying of “a jack of all trades but a master of none”; it does as much as it can right but it also does each of those things wrong. It would have benefited the series to have put more focus on certain aspects above others or to have just put more time into the development in total just to iron out the creases and to make it much more clean and crisp.

I’ll say this much though; fans of fantasy and odd humour will greatly enjoy “The Legend Of Legendary Heroes” but I don’t believe overall anime fans will find much to enjoy about this series. It’s a typical thing that happens with series’ that get a release long after they first aired; more series’ are developed in the time between that outdo everything that came before them so by the time it reaches the shelves it is no longer wanted by fans. It’s unfortunate but, evidently…it’s true.