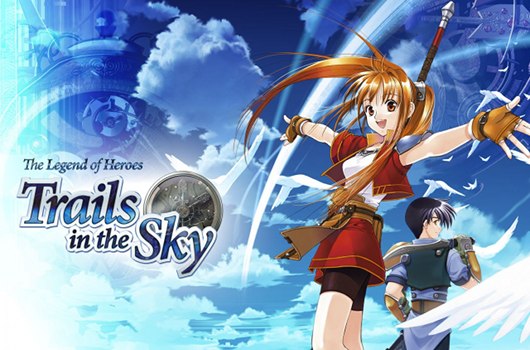 Trails in the Sky is an extremely traditional JRPG, packed with mechanics and characters that fulfil pretty much every trope and stereotype you would expect. The leads are two teenagers who are in love with each other but about the only ones who don’t know it, the battles are turn based, the game is incredibly long, and the dialogue can take over for what feels like hours at a time.

It does nothing new or innovative, but stick with it and somewhere around the second chapter of this five chapter tale you’ll find yourself hooked on the slow burning story and solid RPG gameplay. 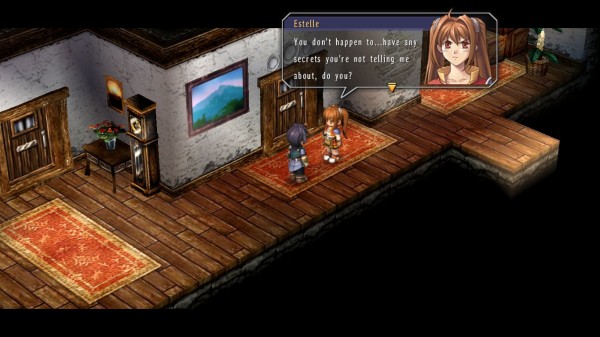 Legend of Heroes is a three part series, so not only is this particular entry fifty hours long, but there are two more games to plow through once you’re done. It originally came out on the PSP in 2004, becoming a hit in Japan but not seeing a release outside it until 2011. It has finally been localised and ported to the PC, with parts two and three still to come; XSEED have already hinted that part two should be released soon.

Estelle and Joshua are two trainee Bracers, brought up as siblings after Estelle’s Bracer father brings home the wounded Joshua after rescuing him from mysterious circumstances. Bracers are the worlds friendly neighbourhood mercenaries, a guild of skilled fighters come investigators who offer their services to the public for a fee.

The opening of the game spends a long time establishing the characters and the Bracer organisation, setting up Estelle and Joshua for the larger, game spanning task of touring the Kingdom of Liberl to train and graduate as full Bracers. It’s more of an excuse to being doing missions than a plot, and the real meat of the story only begins to emerge half a dozen hours in, and even then it’s only sticking its head out. 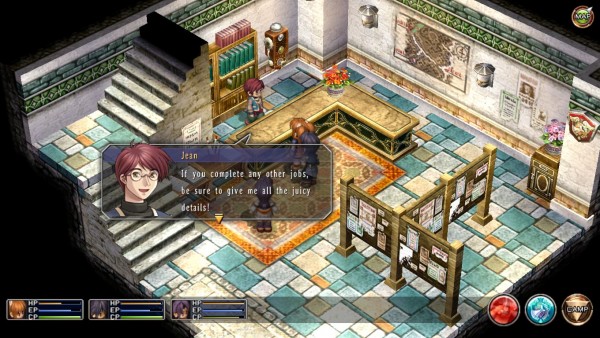 This is a long, slow burn of a story, and I’ll confess that my only feeling towards the characters for the first chunk of play was a mild irritation. Estelle is a mouthy Mary Sue, and Joshua is the level headed, good at everything mysterious handsome one. Other characters do get a look in along the way, and the chat between them is well written. New faces come and go, and it’s telling that I was constantly hoping that they didn’t leave.

Somewhere around the middle of the second chapter I realised that things had changed; I didn’t want to stop. The oft teased plot had started to throw out intriguing little hints and develop into something big, and the characters had got over their bout of stereotype. It took twenty hours to get to me, but when it did the hooks were sunk deep.

So why stick around for so long for the plot to get interesting? Well, there’s a really solid turn based combat system here, and if you yearn for the days when Final Fantasy VII took over your life then Trails in the Sky will be right up your street. The battle system revolves around Orbments, mechanical devices into which elemental quartz can be fitted. The quartzes grant particular magic spells or stat boosts, and combining them appropriately can unleash higher level spells.

Each character has an Orbment with a set amount of quartz slots. To start with only a few slots are open, limiting the spells and abilities a character can use until they are opened by spending Sepith. Sepith – if I remember correctly – is the smaller form of quartz and is dropped by monsters upon death. It can be spent opening slots on Orbments, or fused together to create new quartz. 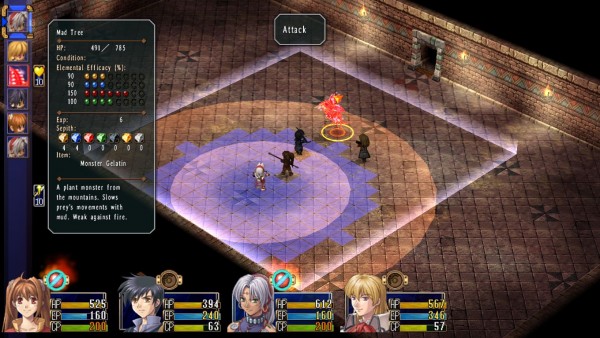 In addition to spells, characters also have their own weapons and special abilities, known as crafts. Crafts are limited in their use by the CP gauge, which is filled by dealing or taking damage. Fill the gauge to 100 points and the character’s final attack can be unleashed. Movement and positioning are also crucial parts of battle strategy; characters can be moved around the field to best make use of long or short range attacks. Battle order is also important, with turn bonuses such as increased strength or critical hits flagged beside the current run order. Changing that order by boosting a character’s speed or taking time to charge up a spell can completely change the flow of a battle- stealing an enemy’s critical hit for example, can save your party from defeat.

Whilst it has the usual dose of terminology to come to terms with, the system is only as complex as you want it to be. Newcomers to the genre can happily bash away, whilst those seeking more strategy can tinker with starting positions and keep a closer eye on the battle order.

The difficulty isn’t that high for the majority of the game, and it is entirely possible to get through a lot of the fights just by hammering the attack option- especially if you plan on resource gathering. That said some of the boss fights are a lot tougher and demanding, and finally getting the right strategy and run of bonuses is incredibly satisfying. If you do get stuck on a fight there is a difficulty option that reduces the challenge of any fight you lose, allowing players of all experience to battle through the game. 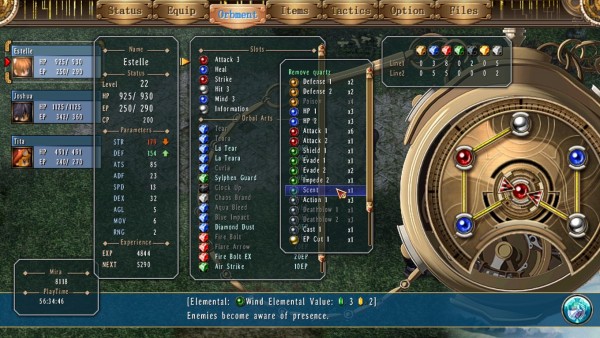 Whilst the battle system is solid Trails in the Sky isn’t a game for grinding or just battling for pleasure. The enemy varieties in any one area are pretty limited, and the EXP system is weighted in such a way that characters get less and less EXP from the same battles as they level up- you’ll quickly only get a point or two each time you take down the monsters floating around an area.

In addition to the main plot, there are also plenty of side missions for Estelle and Joshua to take on for the Bracer guild. These net a decent amount of money and are also neatly woven in with the main plot. Characters or events in a side quest can often add a bit of depth to occurrences in the main story, and they give players a chance to spend more battle time with some of the temporary characters.

The set up is very traditional, and whilst it offers no new ideas everything is executed extremely well. The nostalgia value is high too, as a lot of the features found here have slunk out of modern RPGs, particularly Western ones.

Trails in the Sky feels a little older than it should thanks to its portable origins, but elements of the presentation still hold up well. It feels like one of the 1990s Final Fantasy games, with no voice acting but the occasional battle cry, and a gorgeous soundtrack that lifts the entire experience. 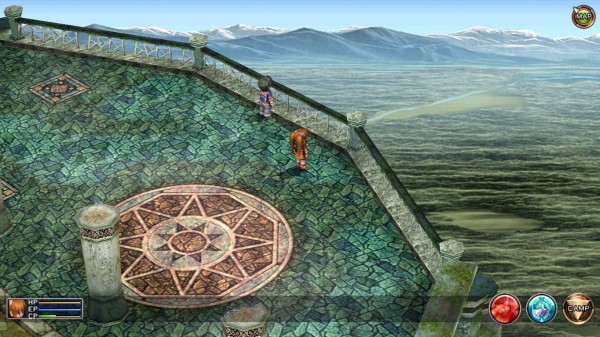 There’s nothing in the environments that will wow but the monster designs and characters are sufficiently barmy and detailed to hold up and the character’s animated portraits do a good job of filling in for voice acting.

The interface is efficient and easy to use, with the only hiccup being the camera’s insistence on switching angles. It can make navigating a tad frustrating- leaving doors and quest items hidden behind buildings.

Trails in the Sky snuck up on me, albeit very slowly. It’s a traditional JRPG that does nothing new, but executes the tropes and mechanics of the genre to a very high standard. The game has been translated cleanly and works like a charm.

The story and characters benefit from the slow burn in the end, and the lovely soundtrack and solid battle system make for an engrossing experience. With two more parts to go it is certainly a great investment for gamers looking to dive into another universe for many, many hours. Bring on part two.