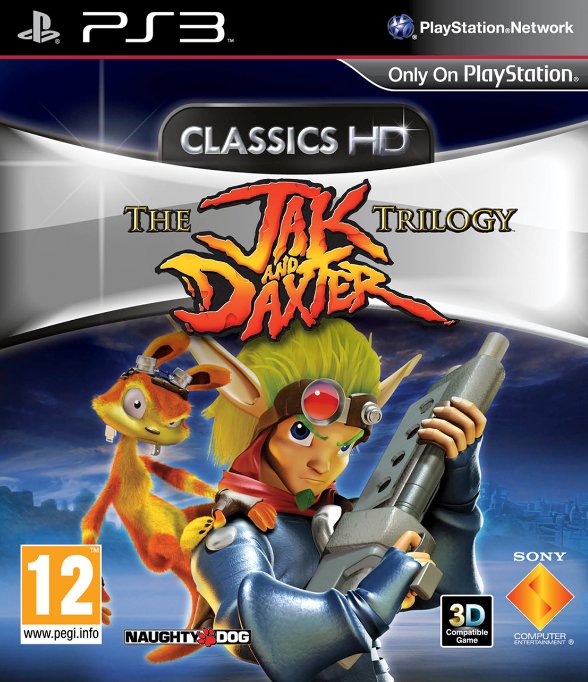 Being on the Nintendo side of the fence during the last generation has left me without any prior experience of the Jak and Daxter universe. Having nonetheless grown up on cartoony platformers like Spyro the Dragon and Crash Bandicoot  I was excited to see what I had missed during my time on the slowly sinking Gamecube boat. Games like these are hard to come by these days, with the platformer having fallen out of style in favour of shoot em ups and RPGS.

Naughty Dogs PlayStation 2 franchise currently stands at six games, with a couple of those entries made on the PSP. This collection features the first three: Jak and Daxter: The Precursor Legacy, Jak II: Renegade and Jak 3. All three games have been given an HD makeover, although don’t expect any other new additions on disc (stereoscopic 3D does make an appearance).

The set up for the Precursor Legacy is fairly simple – two young boys are somewhere they shouldn’t be, see something they shouldn’t see, then try and leg it. In the escape one of the boys – Daxter- is thrown into a pit of Dark Eco and turned into an otsel (that’s otter + weasel folks). The two return to their village sage shamefaced, only to discover that they must collect a truckload of Power Cells (Power Star equivalent) to get him turned back. What they’re actually trying to do is get to the Sage of Dark Eco, but things are kept to a rather vague minimum. For a good chunk of the game you’ll just be collecting Power Cells because the game told you to -and there’s no villain present for quite some time. 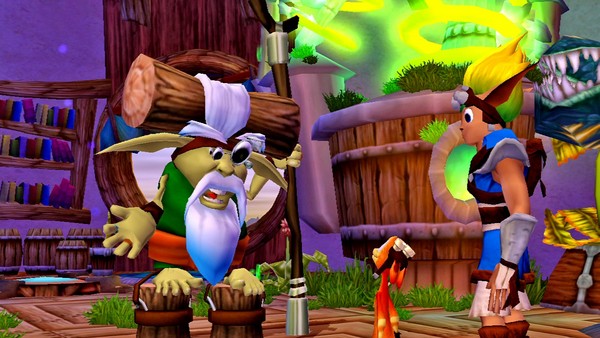 The characters in this first installment are clearly still finding their feet. The silent Jak could be anybody and Daxter is an in your face, annoying little mammal. Things do stay pretty lighthearted and supporting characters are a plus – but there were a few moments when I just wanted to throw Daxter off  a cliff.

Thankfully Jak II : Renegade  ups the ante and provides a lot more drive to the action – taking the series out for the inevitable ‘darker sequel’. Having traveled through a mysterious stargate like portal and spent 2 years being tortured by a dictator, Jak reteams with Daxter to take down the regime and install the rightful ruler to the sci fi world he finds himself in. In addition he must try and control his new found darkside, which likes to growl, rip enemies to bits and generally vibe out some evilness. Torture? Dictatorships? Dark alter egos? Wow. It’s a huge difference from the first game but one that makes all the difference, motive is established from the off and there’s a clear villain to the piece. Jak finally gets a voice (another surprise there) and Daxter is a little bit toned down compared to Precursor.

Jak 3 toes a similar line to Renegade, seeing Jak and co cast out of the city they travel through in the second game. After a bit of a sojourn in the desert wasteland they must return to civilisation and try to save the city, and the world, from the evil that has been haunting them for two games. THe plot is quite dependent on having played the previous two titles, but hey, you’ve got the collection, so it’s all good. Overall the light hearted and comical tone of the series is something that has all but disappeared from today’s blockbuster titles, and it’s great to play something that sets out to be funny and endearing rather than grandiose or philosophical.

As you would expect from a trilogy that released over the entire lifetime of the PS2, the HD upgrades of the Jak and Daxter collection vary in quality simply because of the varying ages in the base games. Whilst Precursor Legacy certainly looks modern enough, there is a certain something lacking in the textures and the detail – it cannot hope to compete with Jak II and Jak 3, which both shine in this new HD release.

The character models are the ones to watch throughout the trilogy, graduating from fairly simple, blocky cartoons in Precursor to highly detailed and expressive characters by the time Jak 3 rolls around. The level design in Precursor Legacy is perhaps more varied than in the other two games, and the original colour pallet certainly sits a few shades cheerier than the rest.  Taken as a whole the HD upgrage is very well executed, a good thing given that it is the sole reason for owners of the originals to splash out on the collection. 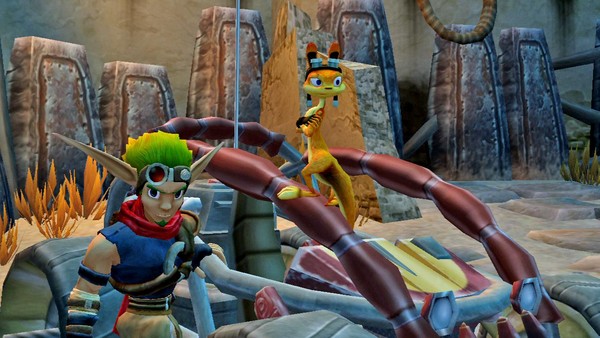 The games go fairly light with the music, relying instead on a riot of cartoon-esque sound effects and high energy performances from the voice actors of it’s lead characters. Yes, Daxter can be annoying but that’s all part of his charm – there’s a personality there for sure. Jak – although a mute in the first game – acquires a surprisingly gruff sound in the sequels, ageing him appropriately as the series goes on. It struck me as an odd choice at first, but when you bear in mind Daxter it all suddenly makes sense!

Gameplay across the series is a huge mix of platforming, shooting, racing, collecting, dying and screaming at the horrible, horrible checkpoints of Jak II. Each game has numerous areas to explore, and the one massive, awesome point that must be taken into account for the whole collection is this: there are no loading times. Take that modern gaming!

The first game has most of the collecting and platforming going on, with thousands of items to pick up and many a tricky jump. The world is divided into themed sections, sporting a lava pit, steampunk elephant graveyard and tropical villages. Jak has a basic spin attack, punch and ground slam and occasionally takes a ride on a vehicle or two. The controls feel tight but the camera’s a bit sluggish – there’s clearly a solid framework here to be built upon for the next two games.

The second game takes a GTA twist featuring an open city filled with horrendously sluggish hoverbikes, crushable pedestrians and twitchy guards. It ups the emphasis on weaponry, handing out a gun to Jak pretty much instantly. Platforming features a little less and collecting certainly takes a back seat, but the balance struck is for the most part a good one. Jak’s moveset is  expanded on by adding a dark alter ego and numerous guns, and thankfully a fairly usable map is introduced. Combat is fun and exciting thanks to the fairly high difficulty, and is broken up by nifty chunks of platforming and plot progression. 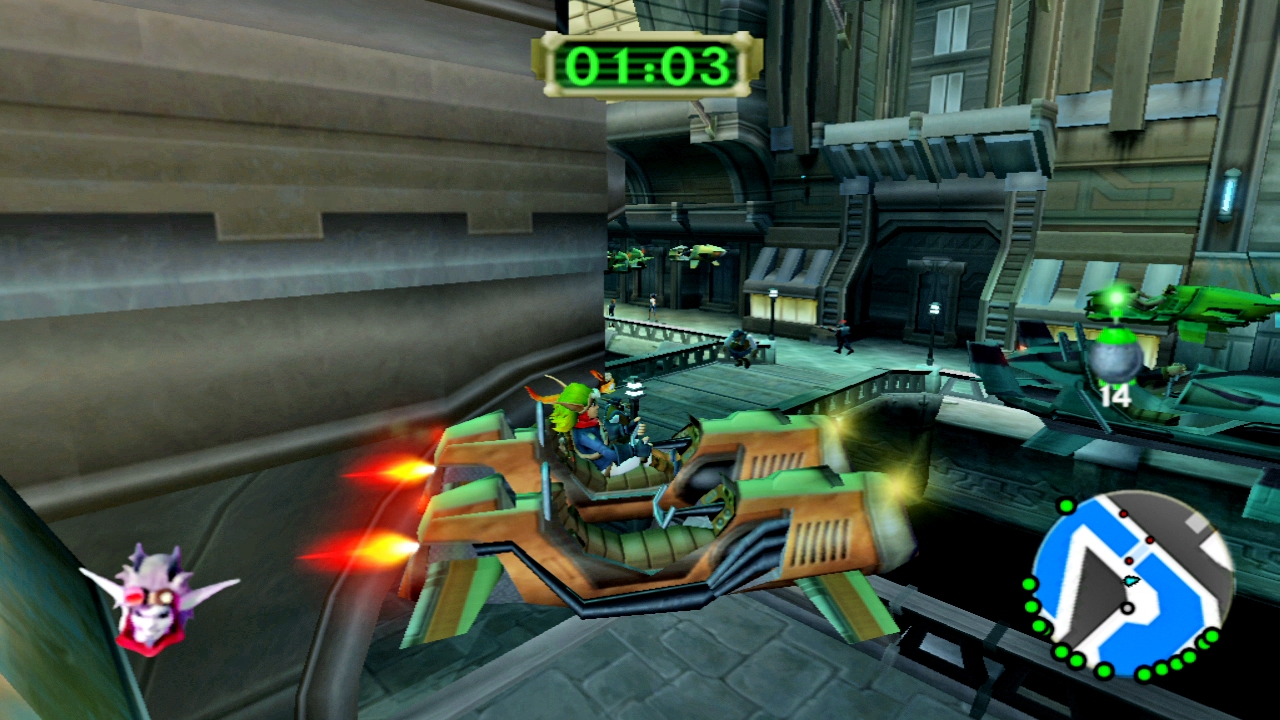 Unfortunately the check points are rather few in number, combining with the aforementioned difficulty level to make Jak II an oft frustrating experience. You can fight your way through dozens of enemies, pass several seemingly checkable points, only to have to go through it all again if you mistime one jump. RAGE. Traveling between missions is also a bit of a slog, and the novelty of the large bustling city quickly wears off when you have to weave through the traffic on a hoverbike/car that steers like it’s flying through mud.

Jak 3 is a lot more streamlined and does away with much of the pointless travel time that mars Jak II. The same basics are still in place, but the emphasis moves even further away from the original Precursor Legacy’s platforming. Driving is a much more pleasurable experience, and Jak gets even more moves and more guns with an additional Light form and modifiable weapons. In short the collection is a perfect showcase of series evolution, and whilst there is certainly an obvious technical winner each game still has it’s own charm and sits well within the series. Great action like this is tough to come by, and given the 30+ hours on offer here the Jak and Daxter Collection is certainly something to add to your shelf – especially if you’ve never managed to play these titles before.

The Jak and Daxter Collection offers a polished selection of PS2 classics that no gamer should be without. These games each have their own identity, all coming with major strengths and minor weaknesses. From a 2012 perspective certain gameplay mechanics may now seem like old hat, but there’s no denying that these games will hit home for anyone who is a fan of genre stablemates such as Ratchet and Clank or Crash Bandicoot. The lack of any additional features may put off those who still have easy access to the originals, but luckily the HD upgrade is a pretty one indeed. Grab this if you want a challenge (that would be Jak II), a blast from the past or maybe, just maybe, a shot at getting Jak 4.