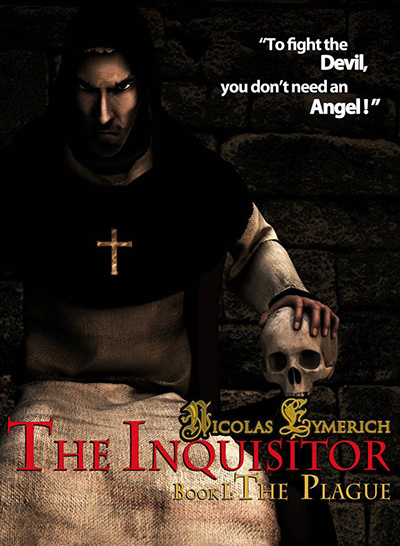 Overview
Living in the 14th century would have been arduous to say the least. Death lurked around every corner. Wars flared up at the whim of a stubborn king, disease could hardly be prevented and, of course, the Church brought down the hammer of the Inquisition upon any hint of blasphemy.

This is an indie adventure title that follows the exploits of Inquisitor Nicolas Eymerich and is based on the historical figure of the same name. We delve deep into this dark mystery and emerge alive and unpunished, so read on! 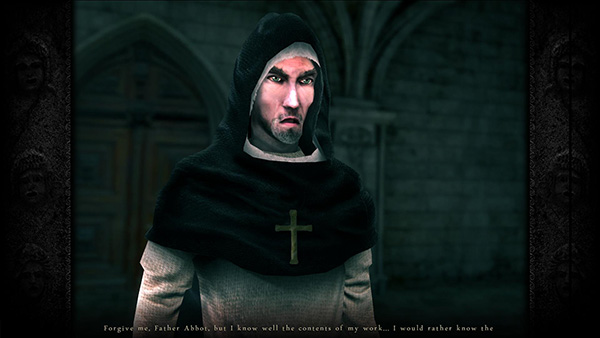 Story
Nicolas Eymerich is summoned by the head of his order to oversee an unnatural case. Heresy is suspected to have taken root in a nearby village, with a fellow inquisitor disappearing after being sent on the case.

It is evident from the start that your old but cunning elder is hiding vital information from you, and thus the player begins a fairly lengthy detective mission in the starting area to discover the truth. The narrative is driven by the main character’s musings and realisations, with the occasional confrontation revealing more of the plot. 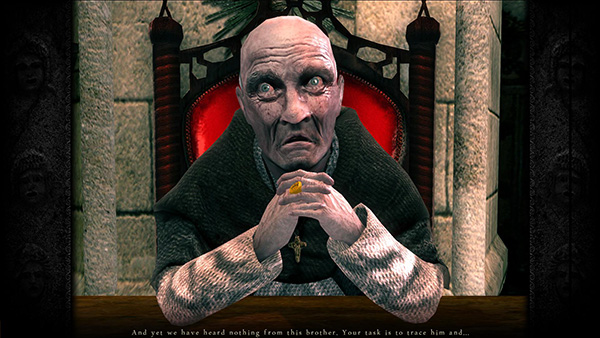 In case you forget just what this is all about, you can always consult your journal and hear Nicolas recount all the events thus far. As you delve deeper, Nicolas discovers that the village was hit by the plague. But it is no ordinary plague either, and he is forced to exercise his experience in dealing with satanic apparitions.

The story works well enough to suit the game’s mechanics, but it’s the amount of background detail that’s most impressive. Being based on literary works and real history, the writer has plenty of room and material to work with to bring out a real atmospheric touch. 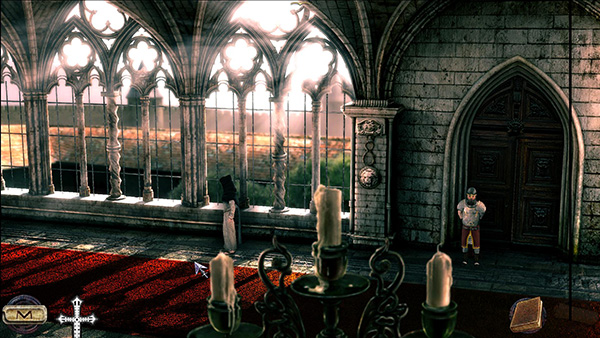 Gameplay
If you’re familiar with point and click adventure games, you’ll ease right into the gameplay mechanics of The Inquisitor. For everyone else, it’s simple: hover your mouse over the environment and click to interact with items, move and access areas.

When in doubt, skim your mouse over the whole screen and keep clicking. You’re bound to trigger something eventually. There is also an option for keyboard input commands, made for those who want a more intimate affair with the controls. 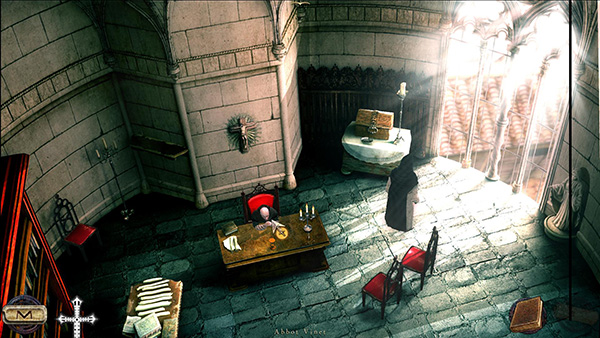 When it comes to the puzzles they are varied enough to keep you engaged, whether it’s trying to uncover a heretic, coax a guard to talk or activate an intricate mechanism. The game provides you with a journal, inventory and a hand-drawn map to aid you. But you’ll find you’re mostly on your own in the cold, lonely areas of the game, forcing you to stop and wrack your brain to figure out where to go sometimes.

There is a solution button, however, that automatically takes the player to where they need to go and solves the puzzle if you’re stuck. Being a novice in the adventure genre, I admit I used this a couple of times when I couldn’t for the life of me work out what had to be done. There is a slight recharge delay for the button, so you can’t exactly mash it repeatedly to breeze through the game. 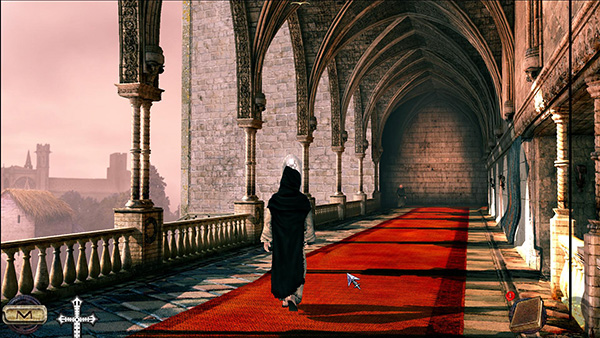 The Inquisitor is built on a solid adventure platform, but that doesn’t mean there aren’t niggling issues. Interacting with the UI often struggles to catch up with player feedback, forcing you to take it slow and be very deliberate with how you click on the environment. The journal for instance turns a page back rather than forward if you click too fast making you pause every single time you turn the page.

Player movement works smoothly most of the time and ensures that, despite Nicolas’ slow walking pace, the screen changes quickly enough. In terms of what you actually do in the game, I would have loved to see some more Inquisitorial justice against would-be heretics. Playing the detective and doing fetch-quests is fine for an adventure game, but this guy is based on a historically cruel Inquisitor General. Let us do his real job! 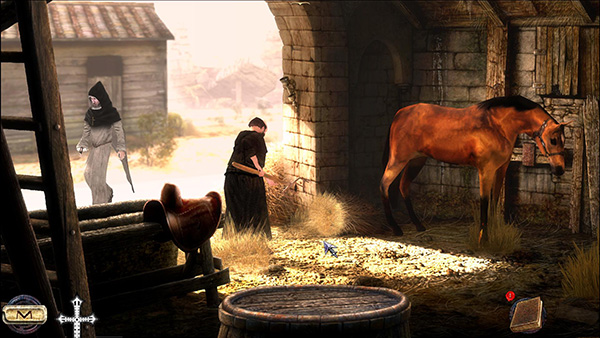 Visuals
On the highest settings, the graphics are surprisingly quite nice with a minimal performance hit. There is an obvious roughness to the character models and the animation which befits an indie title, but it’s backed up by some pretty lighting, intricate backgrounds and vibrant indoor colours. The developer has succeeded in turning a dark and grey world into one that’s packed with detail and pleasing to look at.

Audio
The sound in The Inquisitor is both a hit and a miss. Firstly the team have got themselves some really talented voice actors, with each character expressing all the little nuances in speech suiting the era they’re in. Nicholas in particular has a consistently vengeful tone in his voice that makes him pleasing to listen to. The sound direction, however, could use work. Every line sounds forcefully long. It wouldn’t hurt to speed things up as you’re left waiting for the really slow lines to play out long after you’ve read the dialogue.

The voices also match the environment they’re in, echoing more in a corridor for example. This becomes an issue as they seem to have gone overboard with the effects, ending up with characters sounding like they’re in a fishbowl. These are minor complaints, as the voice actors really do sound authentic. 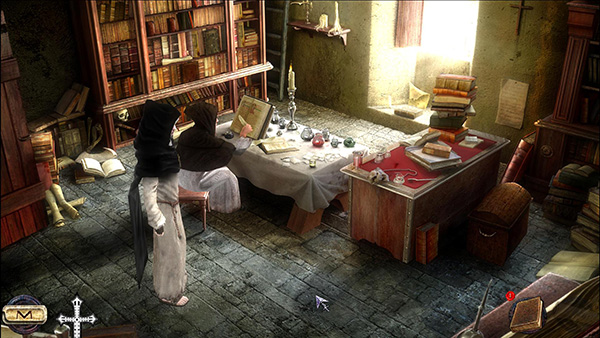 The music sounds strangely out of place in a game set during the Middle Ages, sounding more like something out of a classic Metroid game. It just feels like it wasn’t a priority from the start, which is a shame.

Overall
The Inquisitor: Book 1 – The Plague works great as an adventure game if you’re itching for that classic adventure fix. It also happens to feature a dark, medieval world tangled in religious intrigue with attention to detail that puts big budget titles to shame.

It’s not perfect, with often strange animations and puzzling audio mixing, but it still manages to grab your attention to the very end. We can only hope future sequels see us dealing out some real, divine punishment.