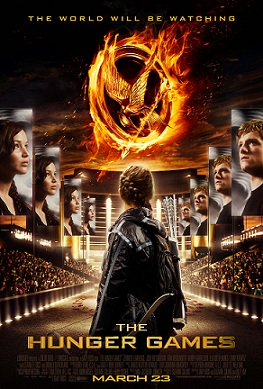 Overview:
The pop-culture magnet may have attracted an anomaly with the 2012 film adaption of The Hunger Games. Based on the book of the same name, the film succeeds in creating a adequate mirror representation of society through a neo-dystopian viewpoint; Exploring complex themes contrary to the one-layered-ness of other popular literary adaptations. Throughout the course of the film you witness the brutality and hardships of life not too dissimilar to ours – With the idea of social division and subjugation by an oppressive government forming part of the necessary catalysts for action.

The Hunger Games attempts to dispel a lineage of youth oriented films that have come before it, breaking away from works that the general public have often associated it with – i.e. The Twilight Saga. It does this by overtly being a visual representation of many forms of ideals – ideals which aim to open eyes and minds to prevalent issues and consequently incite change.

In this particular instance pop-culture has retained its position as an effective tool for promoting a ‘teen-oriented film’- albeit a social discourse cleverly disguised as a film – to the dismay of many – who more than likely were expecting a simple love triangle with the watch words, sparkly sparkly.

The creator of the series Suzanne Collins states that if there was one thing that people take away from The Hunger Games is that they question how the story might be relevant in their own lives – and if they notice injustice; what would they do about it. 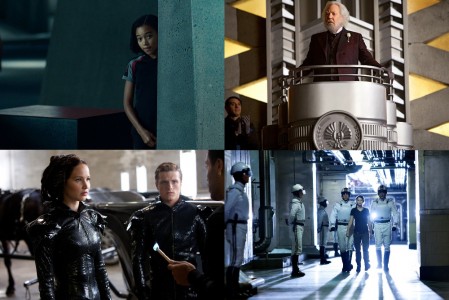 Story:
The Hunger Games is set in a post-apocalyptic North America which has been reformed into the country of Panem. A civil war involved the thirteen districts of Panem revolting against the ruling order based in a futuristic city – known as the ‘Capitol’. As punishment for the revolt – the 13th district was destroyed and an annual event  known as the ‘Hunger Games’ was created –(in the vein of gladiatorial games) The districts all pay a yearly sacrifice to the Capitol in the form of their tributes – children who will die in the Hunger Games – which is a televised event.

“Taking the kids from our districts, forcing them to kill another while we watch – this is the Capitols way of reminding us how totally we are at their mercy. How little chance we would stand of surviving another rebellion. Whatever words they use, the real message is clear. “Look how we take your children and sacrifice them and there’s nothing you can do. If you lift a finger, we will destroy every last one of you. Just as we did in District Thirteen” – Katniss Everdeen

The protagonist Katniss Evedeen a young girl from District Twelve – to the surprise of all becomes the first person to volunteer as tribute when her sister Primrose is chosen through a mandatory lottery known as ‘the reaping’. Her apparent sacrifice literally stops the world  as silence spreads leaving only a poignant hand gesture – a three finger salute (District Twelve’s sign of respect/ farewell) to communicate the feelings of her people.

The same hand gesture is seen after the death of her ally Rue, a 12 year old from District Eleven. Katniss adorns her body with flowers, a symbol of her innocence and humanity. She leaves only turning back to say farewell using the hand gesture. Fittingly the entirety of District Eleven reciprocates the sign. Which from this moment on would be a sign of defiance against the oppressive government – An uprising begins as people are enraged by the senseless death of a child.

The films depiction of death is brutal. Collins admits that putting kids in violent situations, especially ones involving death is difficult.  In the first day of the Hunger Games eleven tributes are killed, most within the first 10 minutes of the games commencement.

The film makes allusion to constructed reality and the controlling nature of governments – namely the representation of a Big Brother form of government – through the Capitols own authoritarian rule. The film makes reference to the “Truman Show”, where like the Truman show, film makers secretly observe, plot and control the direction and actions of participants – altering the game world and creating an artificial sense of freedom. One instance being the lighting of fierce fires in order to guide tributes closer to each other – for the purpose of viewer interest and also to enforce the interests of the state. 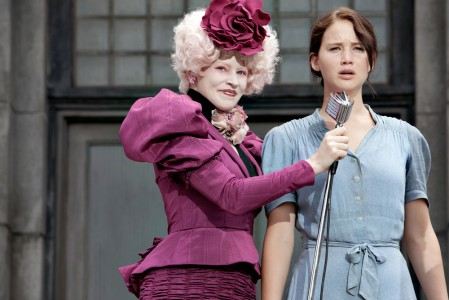 Visuals & Audio:
What the film does best is immersion. Every emotion and thought that the characters experience can also be felt strongly by viewers, the soundtrack acts as a cue for our emotions to evoke outwardly. In the scene where Katniss is waiting in the locker room; she grows more and more concerned as the countdown continues – to the point of prettification, we see this through her body language and facial expression – tight close ups accompanied by jarring audio carefully emulate the thought of death – the actress plays her role with precision. Another example is Katniss’ lullaby to Rue, who sings to the dying child as the camera in lieu of her eyes begins to focus and lose focus to represent her passing.

From many other scenes we see that an emphasis has been placed on realism. An example of this is at the start of the Games. From my experience in playing paintball; I faced a similar scenario where everyone was told to target a single person; who ran towards the centre, naturally everyone chased after him; immediately we were told that it was now a free for all – a quick bloodbath ensued. The quick deaths of the tributes in their corresponding scene and the fast handheld movements of the camera depicted battle honestly. You could be killed at anytime, from any direction and rarely shown mercy.

The horns that are sounded after the death of a tribute in all probability are an allusion to Gabriel’s Horn which is said to announce Judgement Day and can be heard anywhere and everywhere. With each blast of the horn, with every accruing death of a tribute, it signals that the end; whatever end that may be is coming closer. There is the possibility that it could be a personification of redemption, which is what the protagonists achieve after successfully winning and thus defying the government. 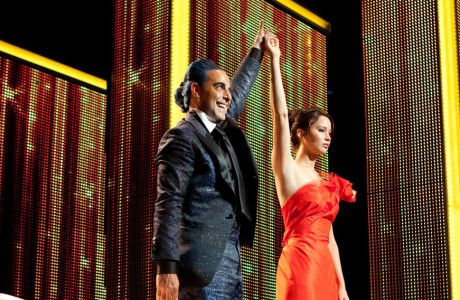 Overall:
Certain aspects of the film stood out as somewhat intrusive, such as Katniss’ over acting after the death of Rue, she does one action being similar to the cliched “NO!!! cry” which ends in her hitting Rue with both hands and drowning her face on her body. The second is the marginalisation of the sponsors – the first half of the story involves the characters vying for support through television interviews and public appearances, however during the actual games, both and all packages which the protagonist receives are from her mentor Haymitch Abernathy or –H.

This may be due to the compression of time, in the book Katniss receives a package from District Eleven for her compassion and support of Rue, emphasising greater importance of sponsors.

The film as a whole is a beautiful piece that is a perfect example of a story with heart. The film has won our favour earning a strong recommendation.