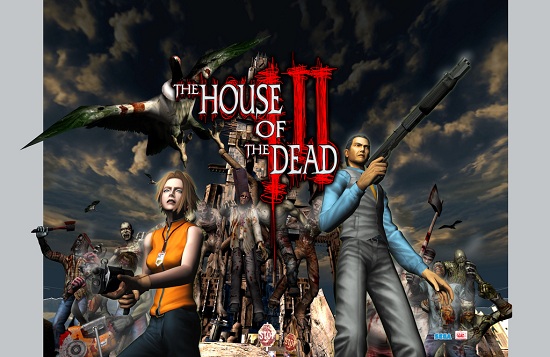 The House of the Dead III was originally an arcade game back in 2002. After ports onto the original Xbox, the PC and the Wii, the game makes its Playstation debut as a downloadable Playstation 3 title, with the next game, The House of the Dead 4, making its console debut on the Playstation Store later this year. The arcade rail shooter puts players into the shoes of either Lisa Rogan or G, both who have links with Thomas Rogan, who is the protagonist of the first game. With shotguns, plenty of zombies and Playstation Move support, will it unlock the inner zombie hunter within every gamer?

The year is 2019 and civilisation has collapsed. You take control of either Lisa Rogan, daughter of ex-AMS and ex-captain agent Thomas Rogan, or a man who goes by the letter G, who had worked with Thomas Rogan before. Thomas Rogan was sent to investigate the EFI Research Facility with the theory that it may have been linked to the collapse of the world and all of civilisation. However, something happens in the facility and contact with Rogan is lost. It isn’t until two weeks later when Lisa and G arrive at the facility, hell bent to find out what happen to Thomas Rogan.

Even though there is a story behind it, don’t expect it to be a stellar one. In fact, it acts as motivation to kill the zombies and that’s that. Lisa and G have a connection to Thomas and are worried about his safety after they lose contact. That’s it. With the length of the game quite short, there isn’t time to divulge into the characters themselves, so no deep psychological torture here. As a horror story, it certainly suffers. The atmosphere isn’t there, thus not making the game scary. Then again, when does story have any importance in a game where you shoot zombies with a shotgun? There is back story for one Dr. Curien and his son, Daniel, through flashbacks. These flashbacks detail his motives before the infamous Curien Mansion case. 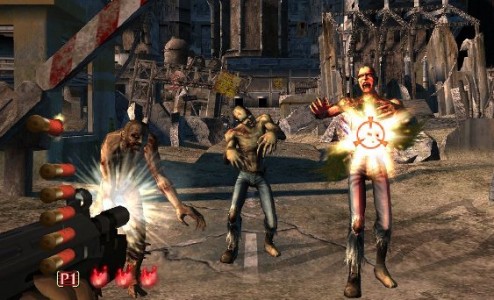 The House of the Dead 3 is your typical arcade rail shooter. Players must use a shotgun against a horde of zombies that take a life when the player is hit. Unlike the arcade version, however, the player does not need to use a light gun. The standard controller can be used. Three actions are only used in the arcade rail shooter. The analogue stick/ directional buttons are used to manoeuvre the cross-hair, the shoulder buttons shoot the shotgun and the action buttons are your reload buttons. However, if you do have a Playstation Move, then I would suggest using it, as it is quite accurate and responsive. It is the closest to the arcade experience with actions such as waving the Move controller across the screen and shaking it to reload the shotgun, close to the “off the screen” reloading that is accustomed with the arcade version of the game. If shaking the Move controller up and down is not your forte, then you can use the action buttons. Considering that the standard controllers have Sixaxis motion control, I am a little surprised that the shaking motion was not included in addition to one button reloading.

There are two modes of play: survival and time attack. Survival is basically going through the game and trying to beat it before you run out of lives and die. If you want two player action, then Survival is your only mode where partners are accepted. In Time Attack, it’s you against the clock as you shoot your way through the game, adding valuable seconds in order to survive. Time Attack is an addition over the arcade game, but was present for previous console ports. Both modes can be played for a position on an online leaderboard, but there is no online multiplayer. Trophies are also present, adding replay value to the game. Some of them, however, are beating a chapter, so you may grab a few during your first playthrough. 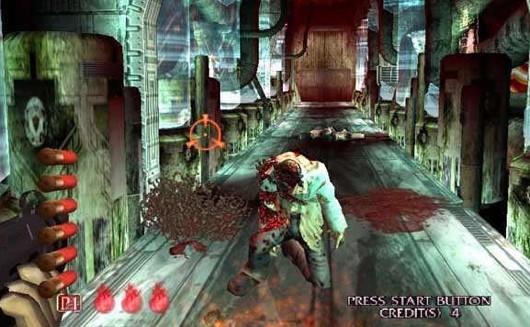 The range of zombies in the game is staggering. Of course, there are the typical zombies, like the fat, belching types and the overly jumpy ones, but there are also zombies this reviewer has not seen in his zombie shooting career. Zombies of that nature include cutlery throwing maniacs, zombies that look like overgrown versions of Cousin It and many more. Also expect the big type of zombie, such as one dressed as a security guard, as the boss battles of the game. These boss battles involves a light orange “Cancel” bar, underneath the green health bar of any boss, which must be drained in order to cancel an attack. These are the weak points of the boss, so it also does a little extra damage to the boss. If there is more than one weak point, then the bar will reflect that by adding extra sections in a different colour.

After each chapter, there is a ranking and grading system (different to the online leaderboard), assessing how you went in that particular chapter. The House of the Dead III was the first to use a ranking system in this capacity. During gameplay, you are rewarded with extra points depending on how fast you take down the zombies. These are Excellent, Good, Faster, and Twin Shot, where you take down two zombies with one bullet, which does happen at times. These, along with how you progress, contribute to a letter grade at the end of the chapter. These are, from best to worst, S, A, B, C, D and E. Gaining a high enough rank will give the player extra lives. An A rank gives one while a S rank gives two. Other ways to gain points are from different items found in crates and barrels, including coins that require the play to shoot multiple times and golden frogs. Gaining lives is different to. “Rescue” events occur once or twice during the chapters. The player must save their player from taking damage from a zombie, with the most threatening ones highlighted in red. If the player has the maximum number of lives (which can be set before the game begins), then it is added to the players total score. In terms of extra content, don’t expect much. Only additional difficulty levels and a short interview about the game are included. 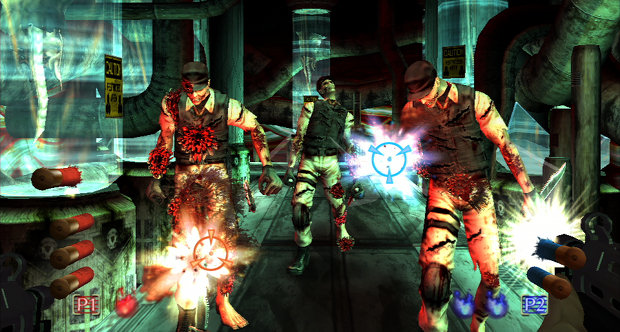 The visuals won’t blow anyone away, but they are slightly above average for an arcade port of a game from 2002. The enemy design shows both some imagination and a fall back to zombie clichés. Enemies I did like were the cutlery throwing maniacs and a massive sloth-like zombie which hangs on the inside of a cage. I was even surprise at the frame rate of the game, even if there was quite a bit of action. There was no noticeable slowdown, it held its ground. However, graphics of a port is usually a double-edge sword. The environments and the character models are basically retouched sixth generations graphics. It also lacks that creepy, scary feeling that it is meant to embrace.

While the graphics are not bad, the audio takes a hit. The soundtrack is not bad. There are horror clichés within the tracks, but some of them are quite upbeat, something I do not believe fits with a game like House of the Dead III. However, they are enjoyable. Voice acting isn’t bad but there is better in other games. What should have been polished before release, however, are the sound effects. Most of the zombies have the same groan, which made me grown quite a few times. The shougun effect is also quite bad. It cancels itself out after the halfway point, making sound like something is wedged right into that barrel.

The House of the Dead III is a great port of the arcade game. The Playstation Move support is accurate and responsive, which emulates the experience one finds when at the arcades. Features that were available for both the arcade and previous console ports are present with the addition of trophies, which will unleash the trophy hunter within all. Visuals aren’t bad but the audio could have been polished more. As an arcade shooter, this exceeds expectations. However, that is all I can say. In the broader scope of things, the lack of depth, as well as no online multiplayer and a lack of bite from the story, will turn gamers away. This is a game only for the hardcore zombie hunters.