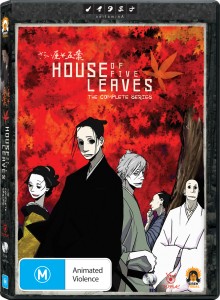 Premise
We’re in Japan at the time where samurai and ninjas ran loose. Though I guess a lot less then we have been led to believe by other animes such as Naruto. Never the less it is a time where a samurai are respected for their honour and feared for their fighting skill. This notion of a samurai is what seems to plague our main character because he is of course a samurai.

‘A single maple leaf… calling card of The Five Leaves.  In edo period Japan; a timid young ronin named Akitsu yearns for the respect and courage of his peers and elders. He meets Yaichi, a mysterious yet charismatic man who hires him to train as his bodyguard. Educating the young samurai in the warrior tradition, Yaichi builds Akitsu’s confidence and skill as he tells him of his dangerous life in the red light districts of Japan and the calling card of a secret kidnapping organisation: The Five Leaves. Cruel Fate awaits.’ – DVD Blurb 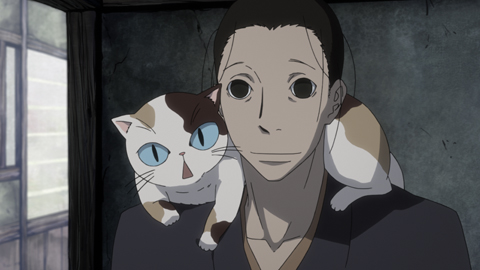 Plot
Akitsu is a samurai who is jobless looking for a job that is fit for a samurai, yet no one will hire him as a bodyguard because he has been labelled ‘undependable’. This is when he has the luck of finding a bodyguard job with a mysterious man called Yaichi. What Akitsu doesn’t know is that he actually is helping this man with a kidnapping. Now he has gotten himself into an un-honourable job for a samurai and he doesn’t know what to do because he can’t go against his word and he truly needs the pay.  Soon Akitsu finds himself within a gang of kidnappers, who kidnap the loved ones of the wicked to make them pay for their sins. As a samurai he is caught not knowing what is truly right while at the same time he needs the money to keep living. Not doing anything to stop what is happening around and to him in the end just lets Yaichi pull him deeper into the family of the 5 leaves. 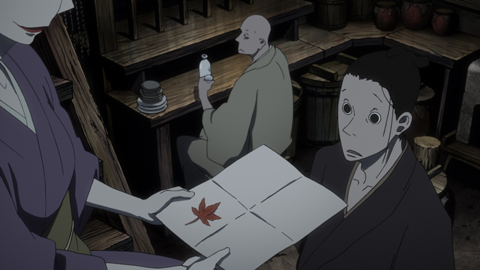 Visuals
The whole anime seems very old fashioned and well pointed but this style really does fit with the period that the anime is supposed to be set in. The colours also seemed to have been dimmed, making everything seem darker and more serious. This kind of style really does fit with the whole story and time period, and makes the whole anime seem like it’s out of those old Japanese scrolls.

Audio
The music is hardly noticeable as it ties in so well with the anime that it just doesn’t stand out. Everything fits so well together though and as usual all the music fits with the period that the anime is set in. The voice actors work great as their characters as well and make everything sound so real. I believe if anything it is the silence within this anime is what truly makes the audio. It makes those dramatic situations so palpable. 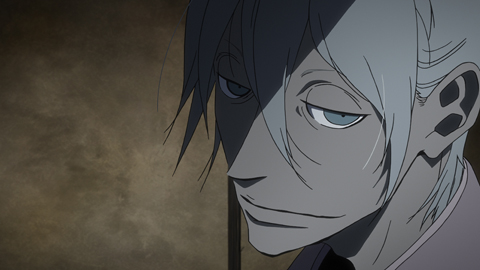 Akitsu Masanosuke-
The samurai who keeps losing his job for being ‘undependable’. Akitsu is a samurai with great skill but because he is too shy and doesn’t act all tough and stoic like what a normal samurai would act like he is considered to be weak by those that see him. That of course means that when he applies for jobs as a bodyguard, the employers take one look at him and go ‘I don’t trust my life in his hands’. Therefore our poor Akitsu is jobless, penniless and out of all luck. That is until he met Yaichi of course.
The one thing I don’t really understand about Akitsu though is why people keep saying he is ‘undependable’. Maybe it has something to do with how he doesn’t fit the normal image of a samurai because from what I have seen Akitsu is great as a body guard. I dunno, it’s a bit odd to me.

Yaichi-
A mysterious man who definitely has a way with the ladies. He is the leader of the gang called the 5 leaves and is the one who has created the spider web that Akitsu has found himself in. Yaichi is a very interesting character and you can’t help but wanting to know more about him. This is what seems to mostly keeps Akitsu close to Yaichi and the members of the house of five leaves. On a side note, I think it’s quite humorous to point out that Yaichi lives in a brothel and it is said that the women keep trying to sleep with him instead of the customers. 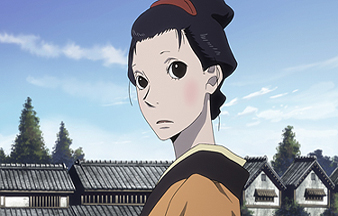 Otake-
Otake is supposed to be a beautiful women and local geisha. It might just be my taste but I don’t get why she is seen as so beautiful. Never the less, the men in the anime see her as a gorgeous lady and therefore are falling left right and centre for her. 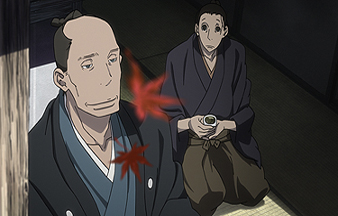 Umezou-
A tavern owner whose daughter is the whole reason five leaves was created. He is very protective over his only daughter and seems to hate anyone that even looks at her. They use his tavern as a kind of base, where they drink, eat and plan their next act.
Matsukichi-
A quiet and collected man. We hardly know anything about Matsukichi and he is definitely giving nothing away with his personality. Akitsu didn’t even know he belonged to the five leaves to begin with. He has an interesting past though, even if his present doesn’t seem as interesting, and I’m not going to give that one away.

Conclusion
The House of Five Leaves is a really interesting anime to watch and it just kept on making me want to know more and more about each character as well as what would happen to them. Though the anime is a bit short, 12 episodes, I think that if anyone wants to watch a samurai anime based in the edo period this is defientely a prime choice. I guess if you want an anime that isn’t action and drama, and a bit more hyper and loud such as the ever popular Naruto and One Piece then this isn’t your choice. That is your loss though.