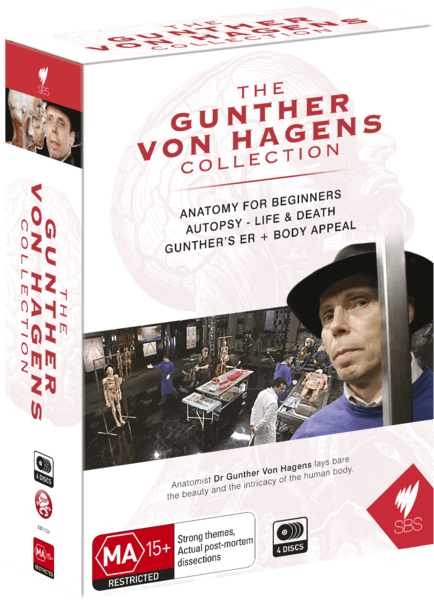 Every now and again you’ll encounter a show that you feel everyone needs to know about. The Gunther von Hagens Collection is one of those shows. Gunther, through the 3 different iterations included in this box set, takes the audience through human anatomy in the name of science education. His unique German ethical and artistic sensibilities come across via quizzical inquiry into the body. Plastinisation, a technique where one fills a cadaver with plastic polymer, was invented by Gunther. This new technique allows an unprecedented level of visual representation of human anatomy. Alongside the actual cutting, these two techniques (plus some naked models, because why not) will give you a three dimensional perspective on our internal workings. If anything, this show should be essential viewing for all humans, just don’t marathon it if you feel like eating any time soon. 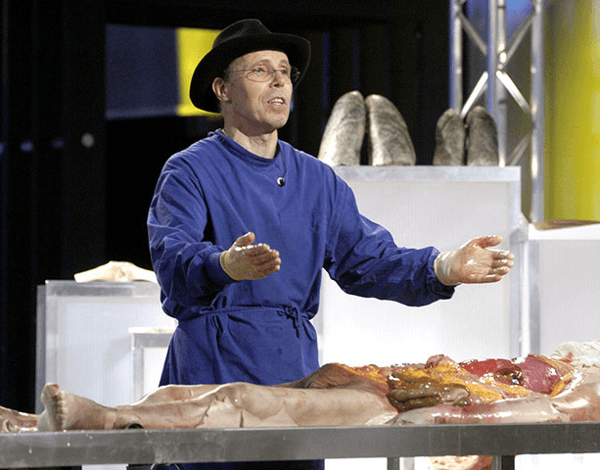 There are 3 DVD’s included in this box set: Anatomy for Beginners, Autopsy – Life and Death and Gunther’s ER, which includes the special featurette. As a collective they all revolve around a specific presentation style. Each show emphasises physical representations of the human body and it’s mechanic basis through demonstrations. The first two, Anatomy for Beginners and Autopsy: Life & Death, are shot on the same set with the same group of auxiliary presenters. Professor John A. Lee is a welcome addition, not only serving as a filler while Gunther is preoccupied with complicated procedures but by orienting the viewer to the micro and macro implications what we’re being shown.

Anatomy for Beginners ignited Hagens’ television stardom. He was already famous for using plastinisation to create the famous exhibition Body Worlds, which can be seen in Casino Royale as the backdrop for a stealthy murder in a museum. Anatomy for Beginners was my favourite of the 3 DVD’s because it was less self aware, stifling Guther’s somewhat macabre sense of humour. Personally, I enjoyed his sense of humour despite the fact that he rarely uses it to reduce the innate tension the live dissection creates. Focusing exclusively on anatomy on this DVD also means that he’s not forced to shoe horn demonstrations into the work. Only when something really can’t be explained through dissection does Gunther make contraptions to show how things are working beneath the surface. Later in the box set it feels like he was given a budget for demonstrations and felt obliged to use it. 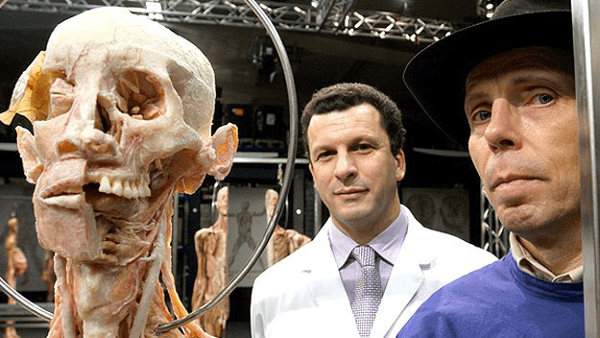 The format is relatively simple: introduce the topic as a narrative to be found in the body, dissection, Prof. Lee takes us through the minutiae, back to Gunther and repeat until the hour is filled. In order to tackle this series you need to be comfortable with viscera. If you’re comfortable with viscera then you’re acceptance going to be pushed as far as it can go. Even as somebody that is comfortable with looking at cadavers I still got a sense of unease listening to osteoporotic bones being sliced in half with scissors because they were brittle enough.

Gunther ensures his audience leaves with both complex anatomical knowledge and advice they can apply to their own lives. Any chance to point out lung cancer, overly developed subcutaneous fat or hardening of arteries is taken – and with great effect. Being able to see the impacts of poor health choices in such a direct manner forces you to reflect on your own choices. You certainly can’t claim ignorance after watching these sequences. Engaging with 4 different platforms throughout this particular series, Gunther covers the primary concerns one might have in operating the body. That may sound like a weird way of putting it but the demonstration of the mechanical properties of the body gives you the sense that all you are is a brain in a rouge contraption.

In Autopsy: Life & Death Guther has loosened up a fair bit. Personally I preferred his more reverent approach as some people could be offended by such jovial attitudes in front of recently deceased people. Having said that, he’s a funny guy so I let it slide. Again, his jokes rarely lighten the mood. Not to say he treats the bodies with any disrespect, Gunther ensures that the subject is both given respect and is granted their final wish – to be used to further the common person’s understanding of anatomical science. In some cases it’s obvious he knew the particular person which makes for compelling interactions. Where the first DVD in the collection attempted to show us the core functions of the body; Life & Death demonstrates common causes of death. Morbid, yes, although you shouldn’t dismiss it for that reason. You will learn little more in life that is more important that the insights that can be gleaned from watching this show. 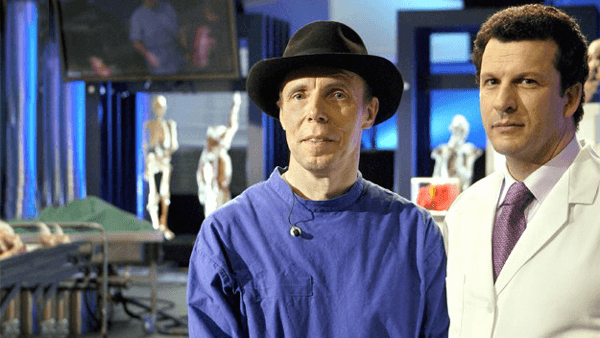 Clearing up common misconceptions while indicating new discoveries, Life & Death is a testament to modern science and its achievements. Not only do we have a host who is at the top of his field, but the collusion between the multiple platforms of presentation leave no one in the audience behind. For those who are worried that this may mean that the show may be below their knowledge level, don’t fret. During these sequences there are usually multiple stimuli. I wouldn’t be surprised if this series became a part of the high school science curriculum. If you want your pop-sci descriptions then you can have it, if you want a deeply anatomical description of interactions of body parts then you can have that too.

The final DVD in the collection, Gunther’s ER, shows Gunther in a new setting with a new co-host. Unlike the other two DVD’s where you feel like you could take some information out of the show to apply to your everyday life; ER focuses more on showing you how the principals of the body’s mechanics are taken into consideration by emergency room doctors. If you needed a show like this to tell you not to jump from a 6 story building perhaps you should be watching Clifford the Big Red Dog instead. There is a bit more glitz in this series as well which can confuse the sincerity of the participants at first. At the end of the day, everyone on set behaves professionally but tonally it may come off awkward. 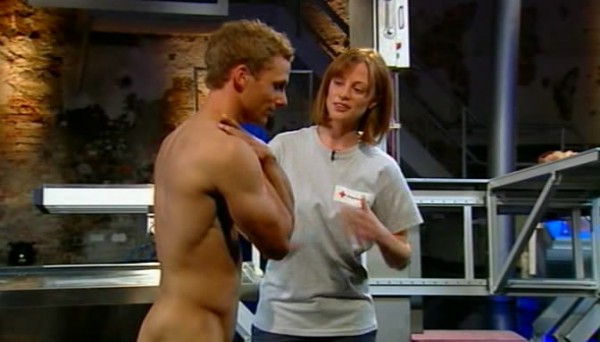 Going back to the series as a whole, there are a few tiny issues that stop me from giving this box set a ten out of ten. I still believe that absolutely everyone needs to watch this show, however simple presentation techniques are fumbled in this package, particularly with the editing. For one, the title cards look like the opening slide of a high school kid’s PowerPoint presentation. In a production of this standard such poor consideration of something so essential to its presentation cannot go unpunished. Titles this amateur make me question why they included them in the DVD at all, it’s not like they’re going to ad breaks. Having said that, ad breaks would have been a nice palate cleanser if you’re going to watch more than one episode. 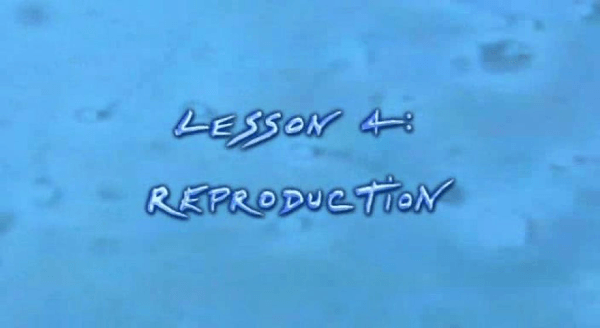 The presentation of the stage allows up to 5 layers to be observed at any one time. There’s the nude models up front, the dissection table, the plasma screen for micro-scale images to be presented, the utensils – including a backlit table and finally a series of Gunther’s plastinisations in the back row. Strategically approaching the set is an amazing asset for the show, particularly since it relies on clear, succinct presentation of its ideas as a central conceit. Audience members are treated to a second insight due to this configuration. Not only do we get to explore the human body, we get to understand the process of autopsy intimately as well.

I should talk about the impact of looking at cadavers here. You may have religious or ethical issues with the depiction of dead bodies on screen. If this is a concern for you then please don’t watch this show. Personally I enjoy looking at the body on this level and feel comfort in the acceptance of death that this show not only promotes but was obviously an important factor for those who donated their bodies. Coming to terms with your humanity will never be as humbling as it is here, understanding the self through dissection has been a kind of catharsis for me. At times it is difficult to watch, such as the spinal pressure test they conduct in ER. Once you have observed the procedures the dirty feeling of watching people claw through the body is replaced with a new wealth of knowledge and respect for life. 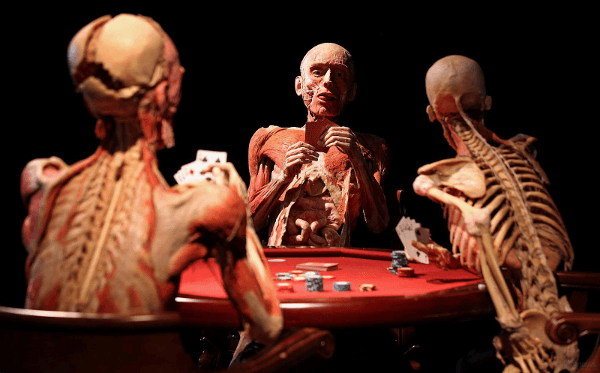 I hope you like the sound of bones breaking. There are some seriously sloppy noises here that add to the intensity of the show. I can imagine that for some the sounds will be the make or break point for engaging with this show. There is almost no soundtrack to speak of, except for intros and outros. Gunther’s voice doesn’t only stand out because of his heavy German accent, he has a way of communicating his passion through the lilt of his voice. The succinct nature of his supporting presenters’ info-dumps are both easy to understand and set the pace of the show. Without them it would be little more than carving up bodies on screen, which has its appeal I guess.

A series like this is begging for more extras. Documentaries on the making of each series should have been a no-brainer. A tour through Gunther’s art is a missed cross-promotional opportunity that could have been genuinely interesting. Of the three DVDs in this boxed set, there is only one special feature. Instead of a fourth episode of ER we are given a featurette of Gunther trying to get more Brittons involved in donating their bodies to science. It’s an interesting topic and relatively well executed, even if they do talk down to those who are against the idea. Those in opposition to donating their bodies to science are made to look silly, which I’m not against, but it is a highly crafted depiction that could go under the radar. Having said that, this has been the most effective special feature I’ve ever watched as I was convinced and am currently undergoing the process of donating my body to the University of Sydney. If you are convinced as well the featurette will describe the process of donation for you. 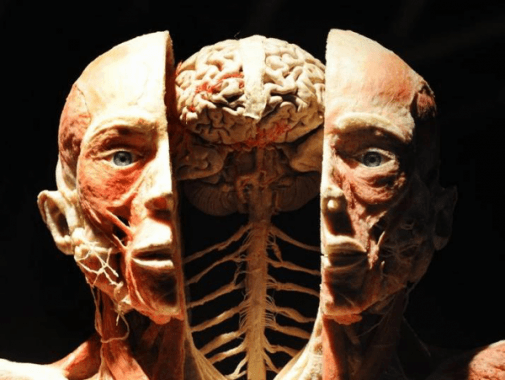 The Gunther von Hagens Collection is mandatory watching for anyone capable. Outside of the educational factor, which makes this essential viewing in itself, there is an innately human quality to this show that cannot be ignored. Coming to know the human form to this level of complexity is a type of enlightenment; allowing the audience to get comfortable in addressing their personal fears surrounding death. If you’re squeamish then you in particular should watch this to break down the disconnection with the physical self you may be feeling. If it weren’t for some rookie errors that occasionally pop their heads up this would be a perfect programme. Unfortunately it is impossible to ignore the amateurish nature of the title cards in each DVD, such a lack of attention to detail really goes against the aesthetic of the rest of the show. After completing the series, I really wanted to know more about the production process. Considering cheesy ‘making of’ featurettes are attached to most DVDs these days I was disapointed that they didn’t feel it was necessary to add something like this to the collection. These, however, are trivial matters in the face of what Gunther von Hagens has managed to achieve – the first televised programme to inspect the human body in a methodical, detailed and educational way.