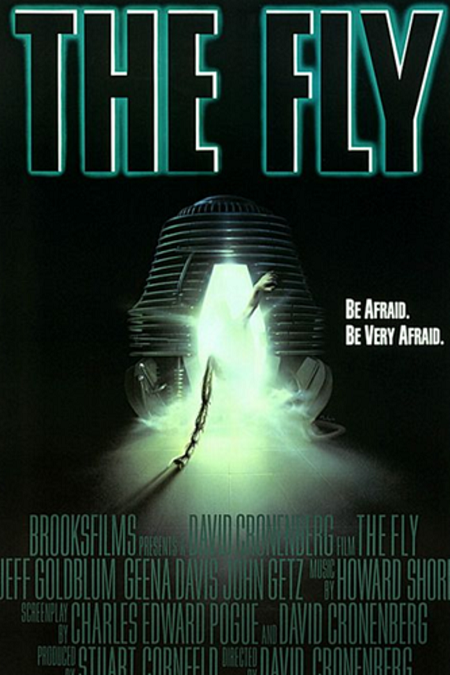 When it comes to director’s who defined the world of cinematic horror, David Cronenberg is a name that would certainly be crop up as one of the top entries. His style of body horror was so distinct and ground-breaking that it is now commonly referred to as “Cronenbergian” horror. I was pleasantly surprised to hear about In the House doing a science fiction double feature screening and even happier to hear that they’d be screening one of Cronenberg’s twisted works. I moseyed on down to George St cinemas to see whether the film as part of their science fiction double feature showing alongside Gattaca. 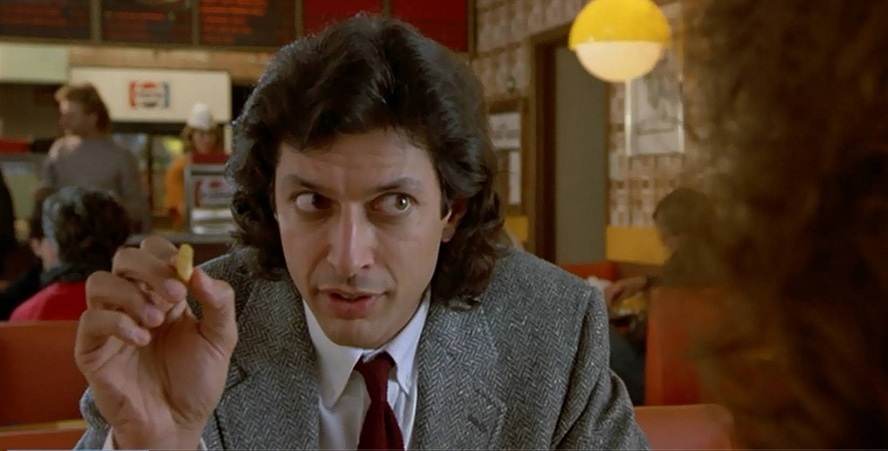 The MCs for the evening were Jason ‘Jabba’ Davis and David ‘Quinny’ Quinn who warmed up the audience before the screening. A highlight for me was when Quinny regaled the audience with his rendition of both Rocky Horror’s Science Fiction Double Feature and Rammstein’s Du Hast. How exactly one gets into a situation where they do both in the space of five minutes is part of the eclectic live charm of In the House and in case you’re wondering: he did alright for a guy who was quite ill at the time. After this brief musical interlude, they sat down and discussed various trivia regarding the film. An interesting aspect for me was finding out that the film was based on a short story which originally featured in an issue of Playboy.

Without much further ado, the film proper started. 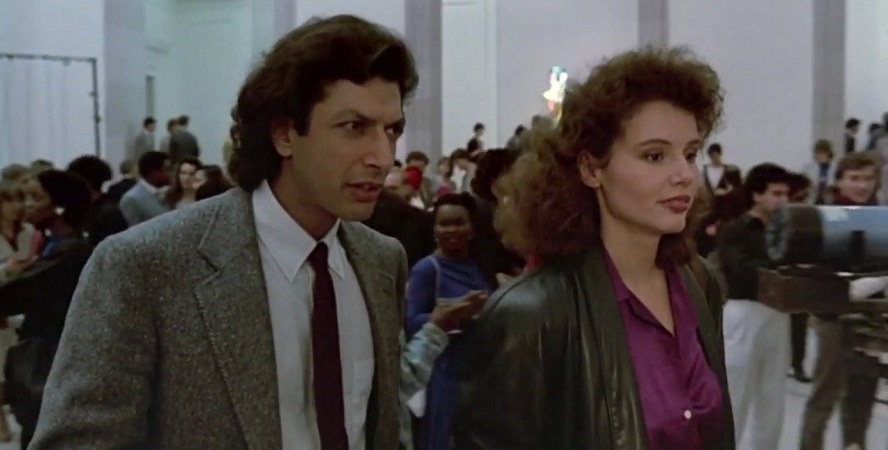 The story starts off at a science press event with the awkward scientist, Seth Brundle (Jeff Goldblum), attempting to seduce science journalist, Veronica Quaife (Geena Davis). He succeeds to entice her back to his laboratory where he shows her a ground-breaking invention: a working teleporter. After some enticing, Brundle agrees to let her document the final stages of testing out his teleporting system on living beings. The first tests yield gruesome results (as befits any film directed by Cronenberg), but after an epiphany Seth is able to work out the kinks in the system to finally be able to successfully teleport a living being. Due to the undesired attentions of Veronica’s ex-boyfriend, Stathis Borans (John Getz), Seth gets incredibly drunk one evening and tests teleporting himself through his machine. Unfortunately, in his inebriated state, he doesn’t notice that a fly manages to make its way into his pod along with him which leads to unexpected side effects in the teleportation process and unforeseen consequences for everyone involved… 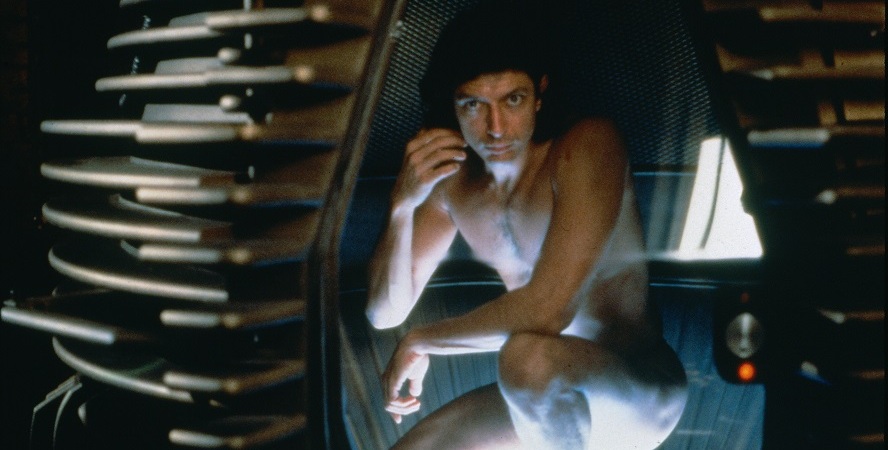 The first act of the film is almost a complete snorefest with little to hold your attention. The characters and their relationship dynamics are introduced and established but there isn’t really too much to go here on. Seth is an awkward nerd and Veronica is an ambitious and curious science reporter. The second act is better as we finally get to see the slow physical transformation of Brundle along with the more immediate psychological change as we him change from a shy, stuttering nerd into a manic, macho and impulsive dudebro. Their personalities are pretty much paper thin with little nuance or idiosyncrasies to define beyond the broadest strokes as individuals.

The final act of the film is where we finally get to the meaty, oozing, moulting heart which beats at the centre of this film. The transformation of Brundle into the monstrous Brundlefly is truly a horror to behold as he morphs both physiologically and psychologically into something truly not human. The final act is filled with enough plot points and narrative development that it ends up giving the story a breakneck pace. The self-contained rise in tension and ultimate climax of this act ultimately makes me question why the film forced us to sit through the ponderous first two acts at all. Ostensibly this was to give us a grounding for the characters but even with this added development, they still feel incredibly one-dimensional. 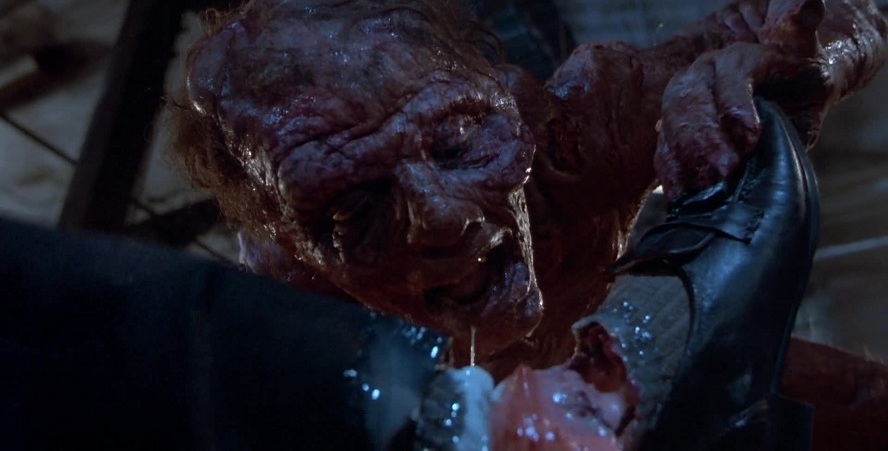 My biggest gripe with the film’s narrative is with how Veronica’s character is largely defined by her sexuality. The unusual love triangle between her, Seth and Stathis is largely what defines her role in the film. We don’t really see do much other than be a lover or an object of lust for both the characters and the audience. This wouldn’t be as much of a problem if she was given something to do in the film besides having or denying sex to the male leads. I don’t consider myself prudish but I do generally prefer to have characters who are a bit more nuanced.

On the other side of this particular coin, Stathis turns out to be quite an interesting and nuanced character in the narrative. He first comes across as a sleazy and arrogant bastard towards Seth and Veronica especially. Initially, he is effectively set up as the film’s antagonist as he acts in a completely self-centred fashion in the first act of the film in opposition to both Seth and Veronica. At the film’s climax, however, he proves to be made of much nobler stuff and goes above and the beyond the call of duty for the sake of Veronica. Maybe he was thinking with his phallus the whole time but gorram, if ever there was anyone who deserved a second chance at transcending their first creeper impression, it would be this guy. 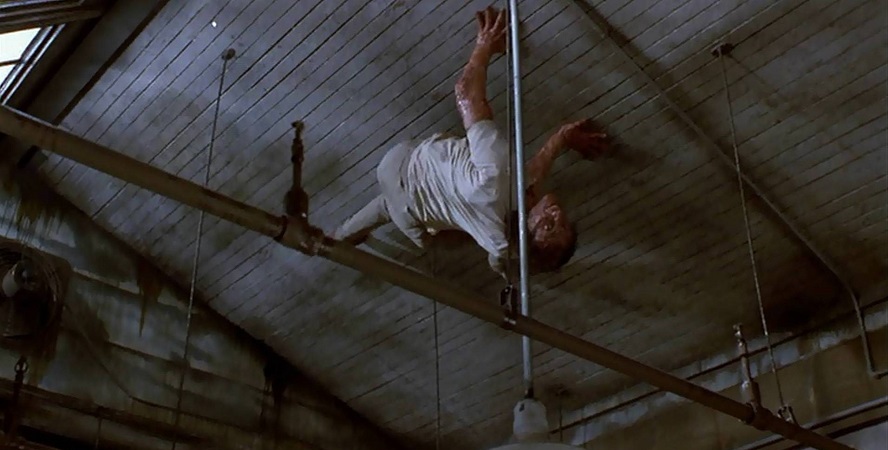 The film’s make-up special effects deserved all the praise it gets and holds up to even today’s standards. I would go further and argue that the film’s practical effects actually do better justice to the genre of body horror than most modern entries I can think of. This is Cronenbergian body-horror at its best with plenty of oozing organic liquids, gore, and distending/vestigial body parts are all on gratuitous display. I’m not usually a fan of horror and even less so of body horror, but I immensely enjoyed my visceral reactions to the onscreen viscera.

The film’s soundtrack didn’t stand out one way or the other. It’s a fairly standard orchestral score which does a solid job of punctuating the film’s emotional beats. The first act is largely left silent without much of a soundscape to really underline it while the final act features more the film’s soundtrack more prominently. It may be that this is because the final act features far more narrative action and therefore meant there was more to punctuate… 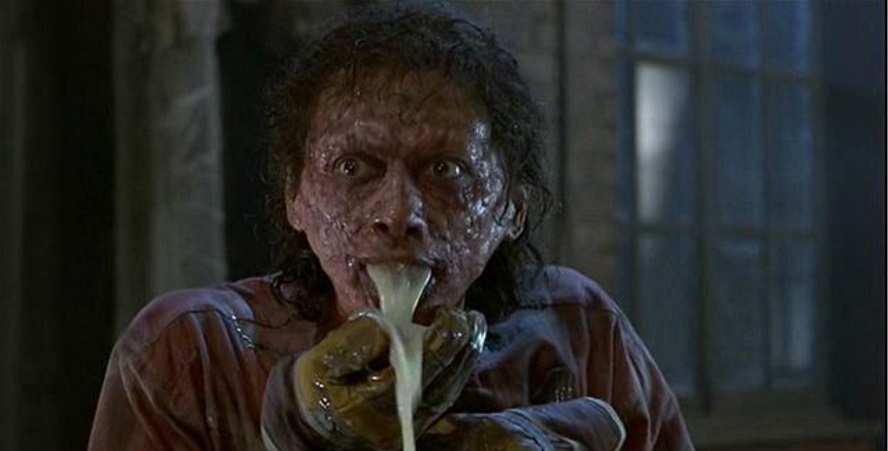 Overall, I can say that I mostly enjoyed this film when the action finally got going. The narrative has a lot of dead weight to it which could have been trimmed to get something leaner and meatier. The special effects are what absolutely make this film a classic. The final climax of The Fly is a scene that makes this film what it is and has it stand out as a classic rather than fade away into sci-fi obscurity. I can recommend watching this film at least once the whole way through repeat viewings should be confined to the final half of the film. The final scene in particular gaining the lion’s share of the film’s praise and is a must-see for any lovers of horror and Cronenberg. It may have had its flaws but The Fly was an enjoyable start to a science double feature show.

The Fly is a science fiction classic that features awesome special effects that rescue the film from a ponderous script.
7.5