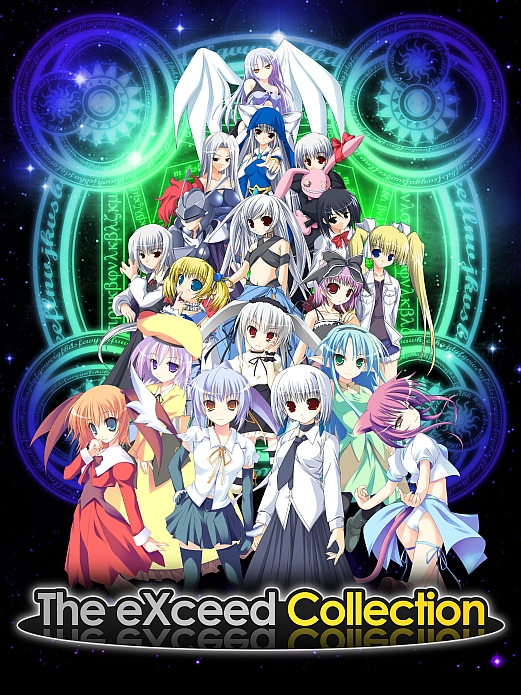 The eXceed Collection is a small collection of 3rd-person birdseye view bullet-hell shooters developed by eXceed. In these games, of which there are three, players take control of stylised-female characters that fly across various landscapes and do battle against enemies that fire a plethora of bullets (I guess?) to kill the player. These kinds of games are really big in Japan and are starting to amass a nice following over here in the west as well.Is the eXceed collection a nice place to start your collection of bullet-hell shooters? Is this something a fan should pick up?

The eXceed Collection collects three titles – Gun Bullet Children, Vampire REX and Jade Penetrate Black Package – which are all interconnected with each other. This means that the games share the same universe and each game takes on a different timeline in relation to the meta-story. Or, at least, this is the impression that the games gave in their presentation and brief descriptions about the universe. With the exception of the third game, I really think this is set in a different universe. 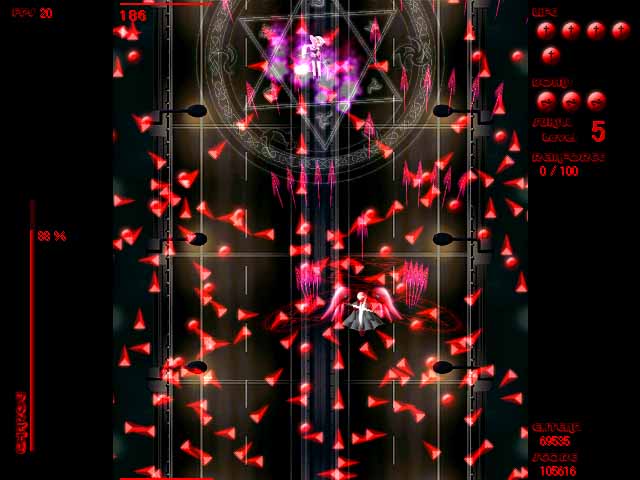 The storyline in these games is really told in a way that would not make sense for a more traditional kind of game. However, these games are built like arcade shooters and as a result, the way the story progresses works really well. Usually the story scenes will occur like this – Small bit of exposition before the beginning of an area, kill some stuff, enemy appears, small conversation, kill enemy, repeat for next level.

That isn’t to say that the story is uninteresting because it is so brief, but I feel that the story is just an excuse to give the players a sense of purpose in their accumulation of a highscore. Players looking for a deep and meaningful story may not find it in this package, however, for what it is, it does tell a nice tale.

Here is the meat of the games. The gameplay. The way the games play. The eXceed Collection games all play very similarly in that they are bullet-hell shooters.

What this means is that players will have to navigate not only wave after wave of enemies as they appear on the screen, but their attacks that will fly at you and cover nearly the entire screen in their bullets, leaving you to learn the patterns quickly to avoid being shot and killed. Unfortunately, getting hit outside of the safe time-limit (which counts down quickly) will get you killed, so these are definitely games where quick reflexes and learning to play are an absolute must. 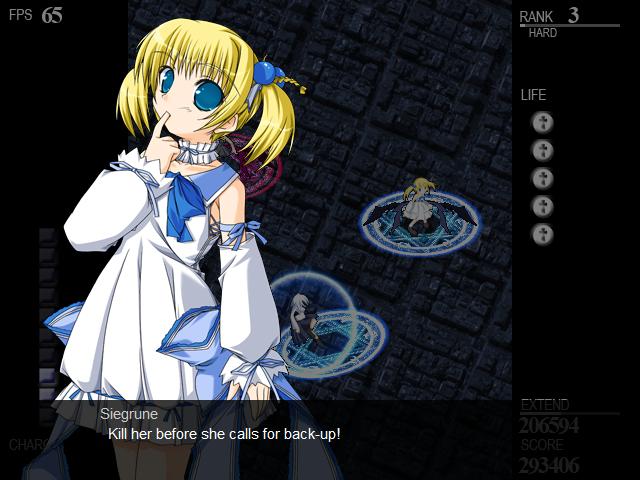 In the first game, Gun Bullet Children, players are given the option to play between three different characters, each with their own weapons to defeat enemies. For instance, one of the girls fires one bolt upwards while having a backup unit behind her that attacks the nearest enemies, while another girl fires three beams upwards, with each coming from the left, right and center. What I particularly enjoyed about this first title was how you had to really learn each major battle in each level. Finishing a level – at all – is an incredibly rewarding experience and is something that players will notice should they choose to invest even a little time into getting this down-pat.

The second game, Vampire REX (my favourite of the three), is a little more simpler than the first game in that you only really control the one character. However it does add a really nice element to the game, which is the ability to change your alignment in conjunction with enemy attacks. For example, there are two elements – Light and Dark – that you can switch between at the press of a button, and say that a dark attack hit me while I was aligned into my dark phase, I would absorb the energy from the attack rather than dying. However, if the light attack hit me while I was dark, I would be killed. This element makes it a little easier to pick up and play as you only have to dodge half the amount of crap being flung at you, but it does also add a further challenge to boss fights where if you focus too much on phase-shifting, you’ll be killed from not dodging enough.

The third game, Jade Penetrate Black Package, feels like an amalgamation of the first two, mechnically speaking. What I mean by this is that there is a mechanic introduced for this game called grazing. Essentially grazing is pretty similar to the phasing introduced in the last game with the exception of you being unresistant to everything, like in the first one. Essentially grazing is having a near miss with an opponents attack, and much like the previous game, this will fill your mana bar which will then allow you to unload a special attack. One of the more remarkable things about this game, when compared to the others, is the movement. Basically, when you’re not attacking or are spamming the attack button, you will move faster than if you were to hold it down. But with this there is also a trade-off, you will utilise different attacks based on whether you are spamming shots, or are holding the shoot button down. 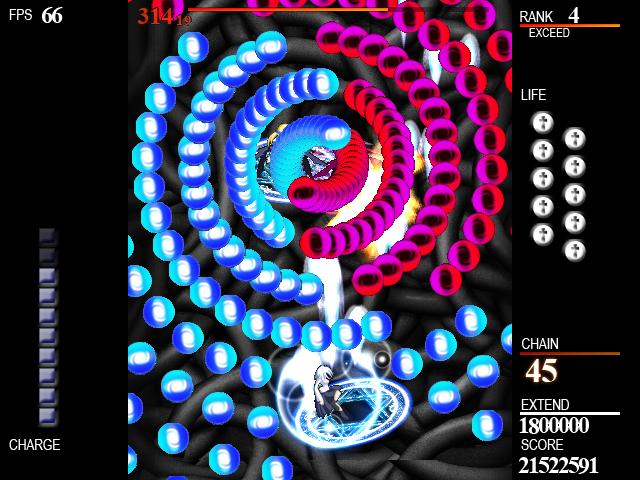 One problem that I would to call attention to was with the first game, Gun Bullet Children, in that it did not read my Xbox 360 controller properly during gameplay. All of the games are gamepad compatible, but, I just found it to be unresponsive with me. The other two function perfectly and the first game is only slightly flawed because of it. It’s not hard to play with a keyboard, but I felt it was my duty to warn you on this.

These games are tough-as-nails to play and gamers who love challenges, and who also have superb reflexes and/or co-ordination will definitely enjoy this game on the gameplay aspect alone. Definitely pick up this package if you’re someone who loves learning sequences, especially if you’re the kind of person who loves sequences.

THIS GAME HAS ONE OF THE MOST AWESOMEST SOUNDTRACKS THAT I HAVE EVER HEARD, EVER. I absolutely loved the amazingly awesome soundtrack so much that I would recommend this game solely for it’s soundtrack. This is a game that I immediately set to try and rip the audio from after hearing only the first level. Sadly, most of it is protected, but the first game uses MP3s, which I’m sure some of you will be rocking out to by just having your PC automatically pick up the games folder. 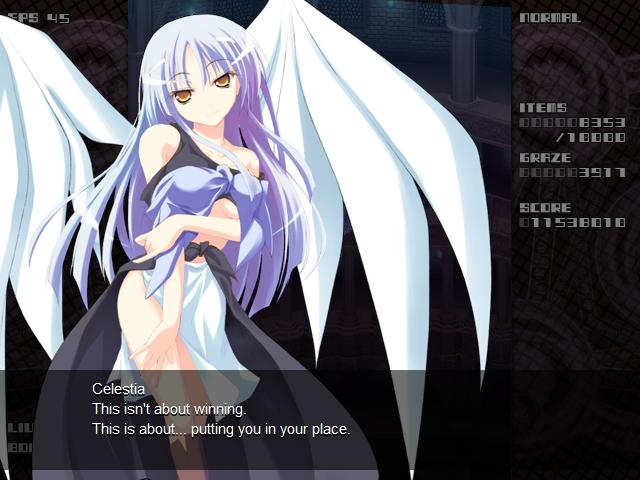 Each game also has a number of voice-over clips that play during the storyline conversations that happen in the games. These are really well done and have a clear and crisp sound that makes them feel quite authentic. I also felt that the voices fit the characters quite well, even if the kinds of tones and pronunciations might make them seem far too cutesy. These kinds of girls are big in Otaku culture and these games are a reflection of that.

And lastly, the games soundtrack. I cannot emphasis this enough. It is like better than most of the licensed stuff I’ve heard, more awesome than some indie stuff and is like awesome heaped with awesome with more awesome splattered on top. Eargasm, eargasm everywhere.

At a glance, this game is not the prettiest thing to look at. Especially the first one where there is no apparent windowed button, causing the game to stretch everywhere over my widescreen display. However, as you will notice, each game is progressively prettier than the last game.

Each of the player characters are portrayed as cute, or moe, girls which I feel is a push towards the core market for these kinds of games, Otaku. This does not detract from the game at all, and as an Otaku myself, I feel that it only strengthens the games premise just a little. But on saying that, I can see where some people might not be as interested in the game if it features cute girls rather than butch, metal-armour wearing roughnecks who are a symbol for burning testosterone. 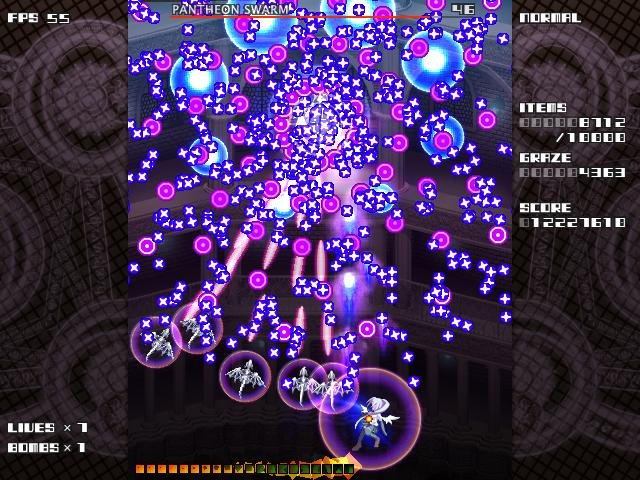 The visuals, honestly, aren’t super impressive, but nor are they incredibly mediocre. They do what they’re supposed to do and they’re not buggy so I cant really whinge about them. Well with the exception of the first game anyway, the characters don;t display properly, but there is a link to a fix in the documentation, so it isn’t really worth too much of a mention.

The eXceed Collection is an amazing bundle that is set at a price-point that anyone with even a passing interest in bullet-hell shooters will consider picking up. The games are an absolute blast to play and they change it up just enough to be different with each title. A must buy for Otaku and Gamers everywhere.