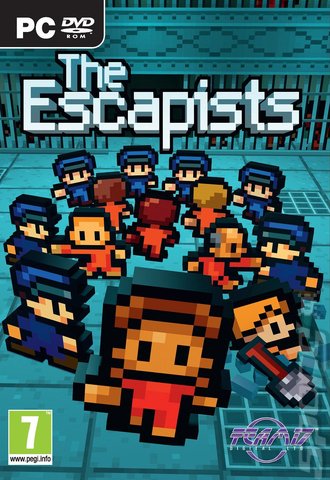 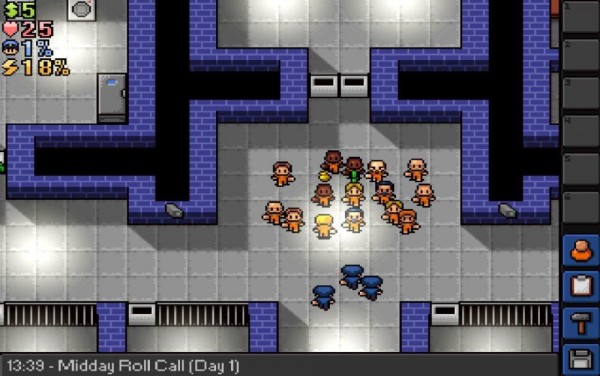 The Escapists is a prison simulator. You play a prisoner in what starts as a low security prison. However, it’s more than just a prison simulator. While I could have just sat and continued to serve my time, continuing through the dredge and daily monotony, this does not complete the game. The goal of each level is to escape the prison, and there is a wide multitude of ways to do so. 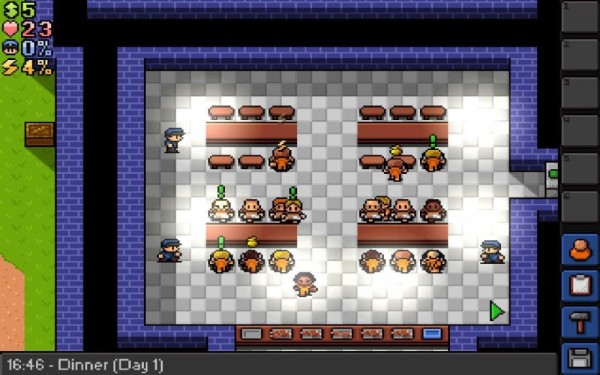 The Escapists is an interesting mix of genres and types of games. When you first load up the game you can browse through (but not access) a number of different prisons with different security levels. To beat a prison is a fairly simple concept: break out and get free. There isn’t really a narrative thread to the game nor is there a story mode. For me, I picture that you get placed in the more secure facilities when you’re caught after breaking out, but The Escapists really requires the player to imagine their own scenarios. There isn’t even a randomized reason for why you were put in prison or a way to select a reason. Personally I think it would have been cool to be able to select different crimes to give you different starting abilities.

Once you’ve selected a prison your sentence beings. The prison day goes through a fairly boring routine; roll call, breakfast, job time, work time, lunch, free time, etc, much like a real prison does. I spent most of my time in The Escapists trying to really figure out all the various thing you can do as a player. I found that being able to do favors from the other prisoners is the most interesting part. These mini-missions are randomized with randomized payouts. By doing these favors you can build up your Opinion (and money) with different characters and eventually recruit them to be part of your gang. This is crucial for some escape methods, but the quests can get a little repetitive. 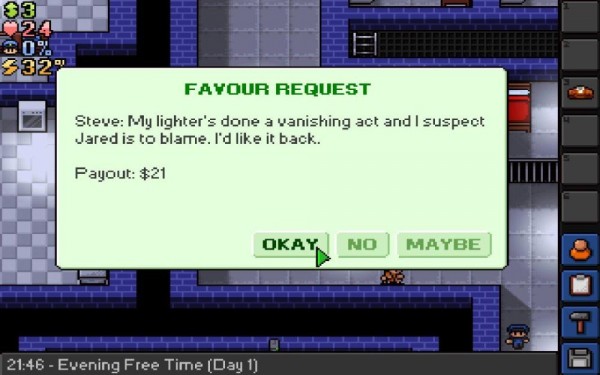 Players also start with a job, and can change jobs after filling certain requirements. Usually this involves making the current jobholder lose their job somehow. It’s a major way to make money in order to buy items from different characters. Additionally there are different ways to build up your stats during free time, such as the gym and the library. You do have to make sure to go to meals as well, and do any required tasks in order to avoid building up suspicion with the guards. Much of what the player will do in their daily routine are these things, working on favors (quests), eating meals, and doing their jobs, until they have the methods and materials to break out of the prison. 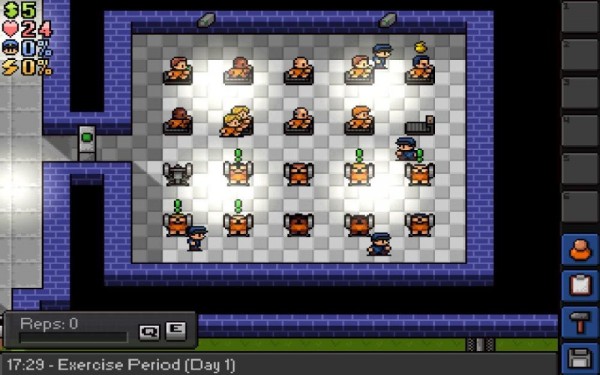 There’s a crafting system in the game as well, and you use this to build various tools and implements in helping you escape. You can also build different weapons to improve your combat ability as well to aid in smuggling items. Combat in The Escapists is pretty simply, switch to combat mode, target the enemy, and move close enough to attack. The difficulty comes from having the right strength and weapons, avoiding guards, and having your allies come help you. I did find some of the in-game comments and discussions by characters amusing, as well as some of the items you can make in the game. The crafting system is actually pretty impressive for a game like this, with over 100 items that the player can make. 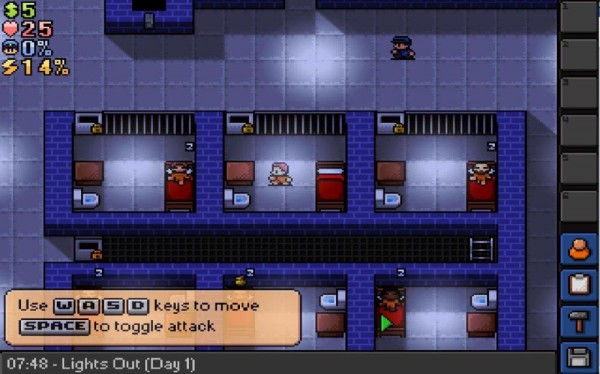 I found the game to be highly repetitive though the different methods of breaking out of the different prisons is interesting. However, the monotony from following the same daily routine failed to really engage me. The different prisons require different ways to break out, but to get to that point you need to do the same core tasks over and over again. Mashing buttons to work out in a gym or doing the different jobs constantly isn’t something that I found to be engaging, even when trying to brainstorm a way to breakout. That isn’t to say the gameplay is bad, but I prefer to have a bit more variety when playing. It’s a well made title, but the overall number of things to do is a bit lacking. I guess the leaderboards and goal of breaking out with higher points in less time is attractive to some, but I don’t think I’ll be returning to these prisons anytime soon.

As far as the visuals go for The Escapists, the title is done as a stylized 8-bit design. This seems to be a popular trend in the indie gaming community. It allows clear and distinct graphics, without requiring the heavy manpower to create complex 3D models. For The Escapists it does use color and design well to create it’s world. That being said, I didn’t find anything particularly distinctive about the stylization. There are nicely done lighting effects, and attention to detail is paid towards animating all of the in game items. I’m fond of how they handle word bubbles and stat changes (be they health, strength, intelligence, etc), but again, there’s nothing that seems to strike me as special from the artwork of this title. It works well enough and has been cleanly done. I think it does undermine the tone of the game slightly, although I don’t find The Escapists incredibly serious to begin with, being a prison escape simulator. 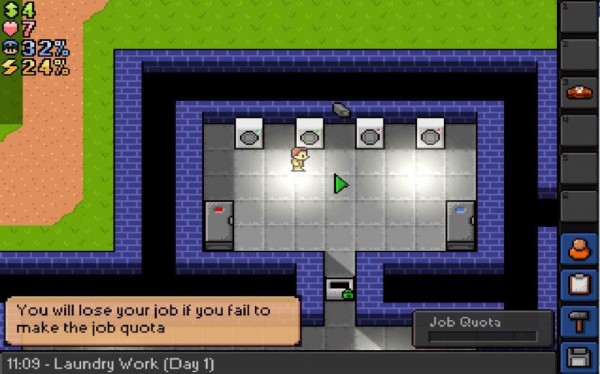 The audio is an interesting mixture. All of the sound effects are done in the typical 8-bit synthesizer style. There isn’t anything to write home about here, the sound effects are just simple noises that indicate to you a thing has happened. What’s interesting is that Mouldy Toof didn’t go for that with their music. The soundtrack is very nicely done, and I enjoyed the ambient background music. It does clash a bit with the 8-bit sound effects, but I found that it worked fairly well while playing.

While I wasn’t particularly grabbed by The Escapists, it is a well-made title. There is a lot of polish to the final version of the title. The core principal of the game is finding your own ways to escape, and that can be fun for some if you can get past the repetitive gameplay. If you enjoy titles where you make up your own story as you try to accomplish self-discovered goals this is a good title for you. It is also a great title if you enjoy set-self challenges and discovering different paths in a game. The Escapists reminds me a bit of the Hitman series in that way. You are given everything you need in each level, and it’s up to the player to figure out how to do it best. Personally I prefer my games to have a stronger narrative and different settings than this. On the whole if you like adventure games and enjoy finding creative methods to beat levels, you should give The Escapists a try. 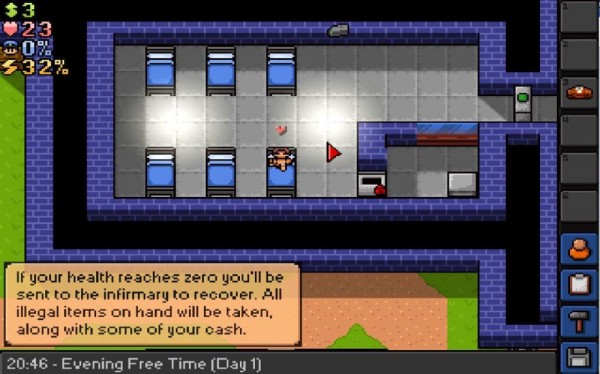