Whether you’re new to the series or just looking to take a trip down memory lane, you’ll find comfort knowing that The Duke Nukem Platformer Pack is more than happy to facilitate. 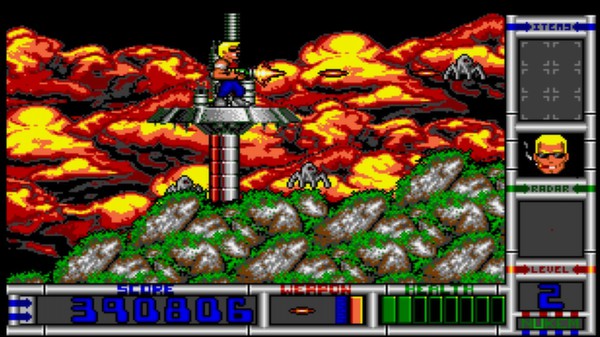 The Pack includes the original Duke Nukem (1991), the sequel Duke Nukem II (1993), and the more recent Duke Nukem: Manhattan Project (2002). It amounts to less than 250 megabytes of space and should be able to run on even the most basic systems, making it a good addition to any collection. 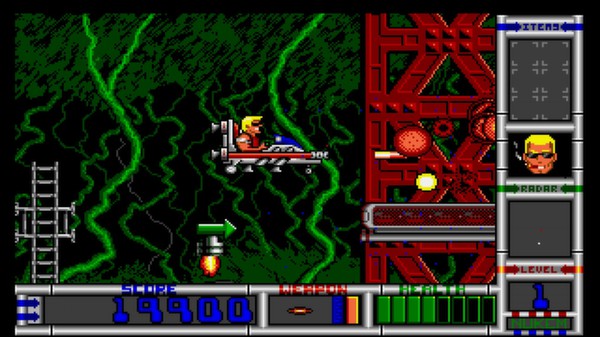 Aside from Duke himself, no real overarching plot exists. Each game has its own supervillan or mad scientist who’s only goal is to destroy Earth, leaving Duke as the only hope for salvation. In Duke Nukem (1991), Duke battles Dr. Proton, a madman determined to take over the world with his army of Techbots. In Duke Nukem II, the world is again at risk, this time by Rigelantins who’ve kidnapped Duke and forced him to plan their war to enslave Earth. 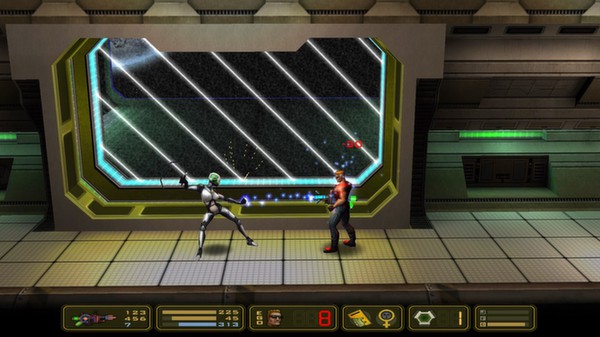 In Manhattan Project, Manhattan is in danger from a mad scientist by the name of Mech Morphix, who is metamorphosing creatures with radioactive sludge to take over New York City.

Duke Nukem, the 1991 release, is the first game in this pack. It’s an interesting entry to play if you wanted to see the roots of the Duke Nukem franchise and it’s challenging enough to hold up to today’s standards. Navigating each level, the aim is to find the exit while exploring, collecting points, and taking out a small variety of enemies. 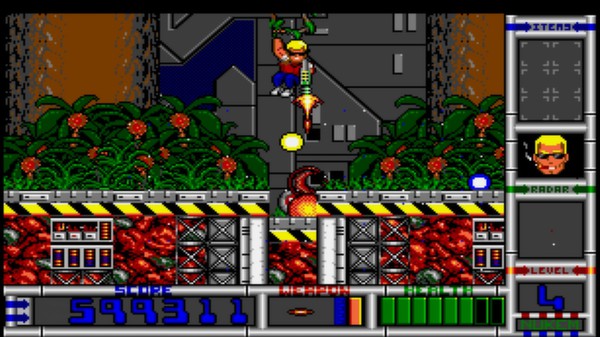 This formula is entertaining enough to keep you playing, but after a few levels, the nostalgia wears off and you’re left with a game that isn’t fully thought out. Its apparent that the levels, though large, are rather chaotic, and it’s quite easy to get lost while trying to find the last key or exit to an area.  These small problems are easy to overlook, especially with the knowledge that this game was released in 1991. All considered, Duke Nukem still manages to be fun and though it isn’t the star of this pack, it’s worth a few play-throughs.

Duke Nukem II, on the other hand, is mind-boggling good. It truly feels like a sequel should feel: updated, optimized, with additional features, and a better look compared to Duke Nukem (1991). The levels are well thought out and tougher. It’s harder than Duke Nukem while also bringing in more elements; like the ability to shoot up, instead of just left and right. It’s here that you can tell why the franchise became such a huge success in the 90s. 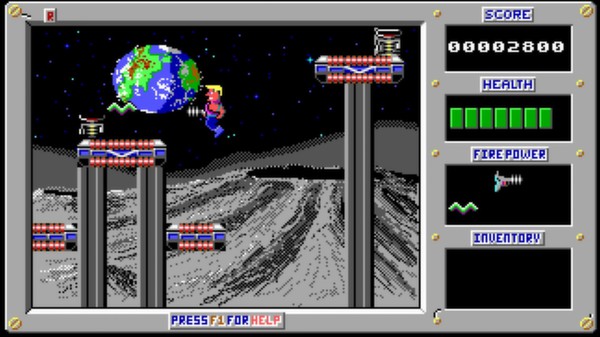 The levels are large and give you a sense of exploration, while remaining easy to navigate. The scenery is ranged, making every level feel unique and, unlike the first, enemies are more numerous and dangerous. At many points, I truly felt challenged and as a result, I found myself returning to play Duke Nukem II again and again.

Sadly, Duke Nukem: Manhattan project, though more recent, only exists to hinders the platforming side of the Duke Nukem franchise. The staples that were forged in the earlier Duke Nukem platformers were shunned, here, and instead we were left with a this. 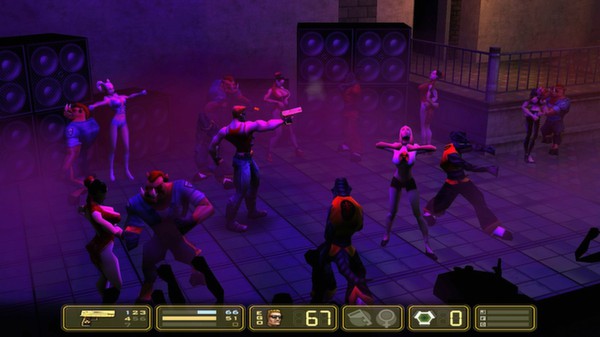 The difficulty and exploratory elements of the earlier games are lost on Manhattan Project. The maps feel very linear, forcing you towards an objective, all while encountering unchallenging enemies and easily navigated terrain. The world, though graphically up to date, is bland compared to its predecessors. The feeling of exploration is completely gone and the levels begin to bleed together as one large and forgettable experience.

It’s only made barely playable by the antics and dialog of Duke, himself. This controversial side of the franchise wasn’t introduced until Duke Nukem 3D, where vivid sexuality, pornography, obscenities, drug use, and graphic violence gave Duke his famous personality. 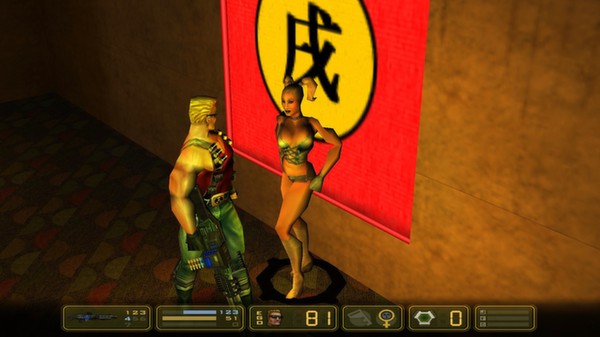 Visuals
Surprisingly Duke Nukem (1991) doesn’t have any of the iconic visuals that later editions to the franchise do. It’s also obvious that Duke Nukem was made in the early 1990s. Nothing is visually striking, even for its time, and in most cases it isn’t noteworthy at all. Scenes are bland and unmemorable, enemies aren’t menacing, and even Duke looks like a cookie-cut action hero; lacking his vulgar language and babe magnetism.

Duke Nukem II, though only coming out two years later, had vast improvements in the visual department. From the main menu to the ending credits, Duke Nukem II’s updated graphics brought a better experience. Enemies no longer look like toy robots, instead they’ve been replaced with armed guards and monsters. The levels themselves look completely different; giving a darker and perilous vibe. Now, almost two decades later, the visuals are still striking. 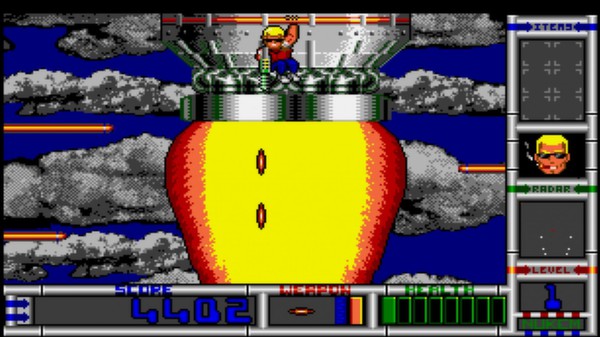 Manhattan Project, released in 2002, brought with it a 3D engine and a overhaul to the visuals of the earlier platforming tittles. This step away from the earlier 2D platformers, in 2002, may have been exciting at the time, but now feels like nothing more than a cheap gimmick. It adds little to the gameplay and instead decreases the fun; honestly an improved 2D sequel to the original platformers would have suited this franchise much better. 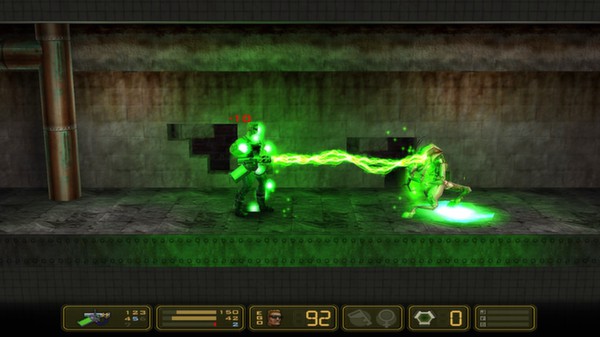 The audio in Duke Nukem and Duke Nukem II are a real treat; it takes you back to a time where bloops and bleeps took the place of High Definition Sounds. The audio in Manhattan Project is one of its only redeeming features; the ability to hear Duke’s quips and insulting phrases almost makes the game worth playing. 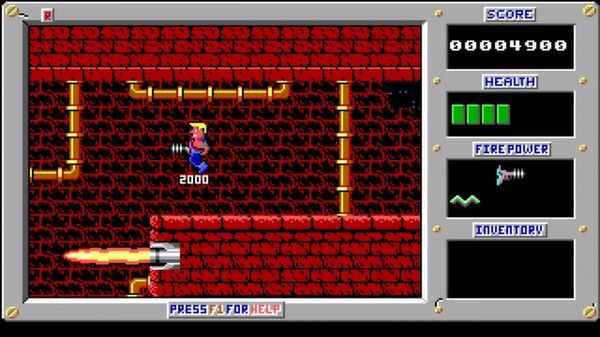 If you’re wanting a challenge or looking to revel in the past, the Duke Nukem Platformer Pack will surely provide. It might be rough around the edges but it delivers a good experience for the price. It is a testament to the fact that some games never get old; its too bad that the Manhattan Project couldn’t have been left out in lue of one of the greatest games of the 90s: Duke Nukem 3D.