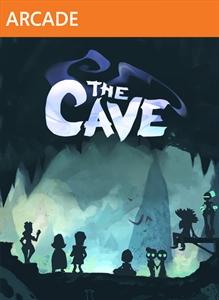 Overview
Double Fine Productions are known for their knack for adventure titles, and have started 2013 off with a bang with The Cave. While the name is a bit plain, this romp is anything but as it was created by Ron Gilbert, the mind behind the likes of Manic Mansion, Day of the Tentacle, and the beloved Monkey Island series. Yes, all of the charm you would expect has made the cut into this digital release, but is The Cave worth exploring? Let’s find out.

Story
The Cave doesn’t have an overall narrative, as it features seven different characters who are out to fulfill their own destiny. To do this, they must trek down into the depths of the cave, and use each other’s skills to obtain their goal. It sounds ever so sweet, doesn’t it? I mean, we have a knight, a pair of twins, your typical scientist, hillbilly, time traveler, a gentle monk, and an adventurer – all working together for a dream. Well, The Cave is not your stereotypical story book, as these personalities must be selfish to succeed. 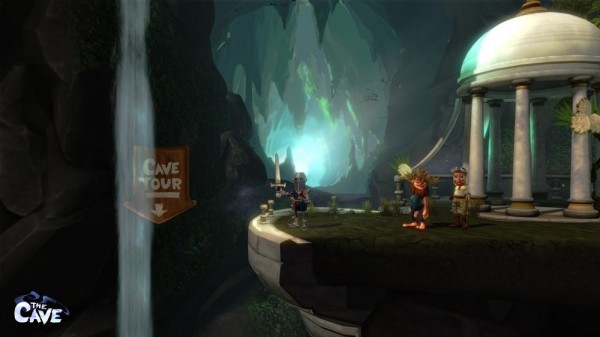 The Cave’s walls are littered with blood, bones, and torment – which the narrator (who happens to be the cave itself) seems to be quite proud of. Now the general concept is to explore this lair with whichever three characters you select, and discover themed destinations based around one specific character in your party. There are a lot of undertones in this plot, but the main idea is to achieve your goal by thinking of yourself. Yes, it’s dark and even twisted at times, but the bumbling cast involved keep The Cave feeling like a light-hearted affair, disguising the tortuous walls with side-splitting humor.

Gameplay
I can’t help but think of Lost Vikings when speaking of The Cave, as gameplay wise – the two titles are very similar. The player only gets to explore The Cave with three characters, and will only be able to control one of the trio at any given time. This means that you will need to swap out on a regular basis, ensuring each character is caught up to the next so that they can work together on the many puzzles within. As I mentioned, this cavern is made up of several areas, each featuring puzzles and environments based upon a specific theme. For instance, there is a carnival for the hillbilly, a castle for the knight, and a laboratory for the scientist. To progress, the player must complete the puzzles in each area correctly. Making matters a bit simple is the lack of death. Yes, you can die, but the punishment is very minor as the focus of the experience is on exploration and puzzles. 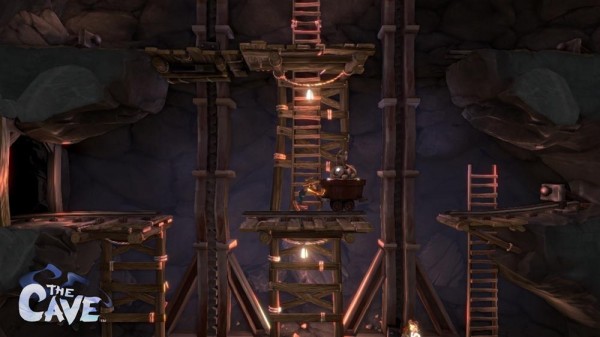 Most of the puzzles within The Cave revolve around using items and switches to open doors or blow down walls. For instance, there is one spot early on that features a hungry monster that will kill anything that even attempts to cross it’s path. The player must send one of their heroes to get a hot dog, and then use the food item as bait while another character stands by near a lever – which is used to trigger a trap for the beast. Yeah, not all of puzzles are like this, but almost every element in the game requires a level of teamwork, so getting each character involved and in a appropriate location is mandatory if you want to solve the clever puzzles at hand. These little brain benders have a lot of depth behind them as well, as a good portion of the time one item will have to be obtained by clearing a smaller puzzle – such as finding a fuse to turn on a vending machine when food is needed. It all comes together nicely though, and even though the backtracking can be rough – The Cave will make sure the rewards for completion are always great each time a large objective is complete. 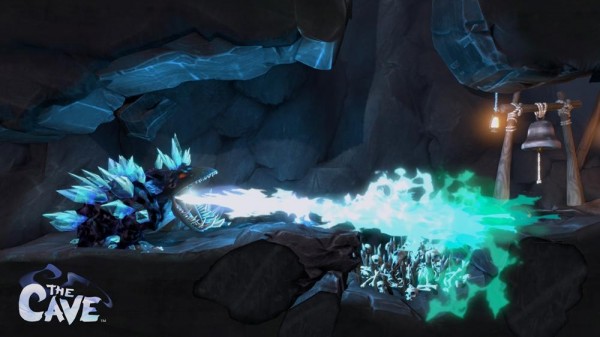 Adding a little spice to the experience are special abilities. Each character has their own unique move, which can assist or open a shortcut if used correctly. The time traveler for instance has a teleport to move through thin walls, while the knight can summon a shield to protect him against all damage. These are a small touch, but work well with the puzzle solving elements involved. One thing that is a bit rough however is the general controls. Each character moves around fine, but can be very slow. This wouldn’t be much of a problem, but there is a lot, and I do mean a lot of backtracking within The Cave, so you will more than likely be crossing the same paths again and again as you try to complete an objective. The platforming is also a bit off, as missing a jump can be a common affair due to the slight clunkiness, so patience is a trait the player must have in order to enjoy all of the offerings on display. Again, these minor shortcomings are just that – small little annoyances that are only amplified by the repetitive exploration due to the three character concept. I adapted after a bit, but found myself taking several breaks during my first run to kill off some of the monotony involved. 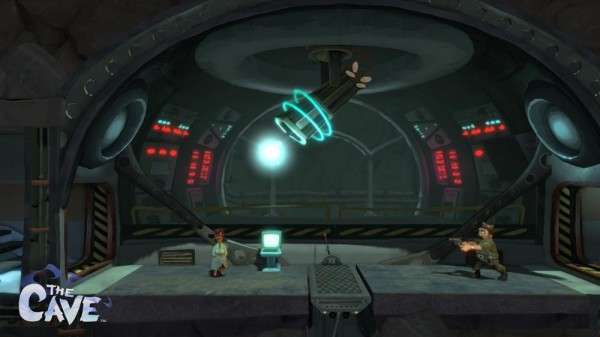 Luckily, The Cave’s brilliance shines through at an unlikely area – and that is replay value. With seven characters in all, one would have to play the game multiple times to collect every painting and solve every puzzle, and the narrator and themed level design always brings about something new, so that the second playthrough will be completely different from the first. Aside from the tiresome backtracking and repeated puzzles at times, The Cave is a game that can be savored due to it’s replay value, and those who enjoy exploration are sure to find themselves in paradise with all of the hidden secrets, puzzles, and items littered throughout this dark and grimacing structure.

Visuals and Audio
When it comes to the visual design of The Cave, it’s obvious just a few moments in that this game was built to compliment the personality of the cast of characters within. Every model has been crafted well, as small details and facial expressions give off both personality and atmosphere, and the animations ensure that the seven spelunkers control and feel different from the next – which is a trait that greatly adds to the incentive of multiple playthroughs. The Cave itself is treated to a stunning art design, popping with relaxing and dark tones – with the themed areas coming in to a pleasant change of scenery as the game moves on. 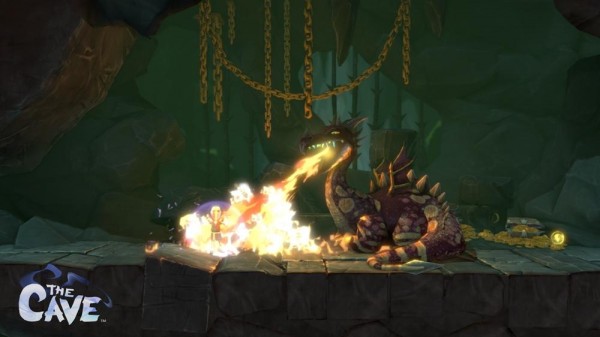 As far as the soundtrack goes, well – there isn’t one. No, that’s not a bad thing in The Cave’s case. Instead of ambient music, the sound effects of water dripping and other environmental sounds give the player a true isolated feeling of unease as they explore, while the narrator chimes in to sprinkle humor and tips throughout the game. The narrator’s role is honestly one of the most endearing qualities of The Cave, to be honest. Some may shiver at his lack of morals or care for the seven innocent dreamers, but his twisted and rather unsettling dialogue make for an unforgettable experience and could even be compared to another host of misery known as GlaDOS.

Overall
The Cave is not a perfect game by any means as the backtracking can grow tedious, and the controls could have certainly seen a bit more polish. Honestly though, for every patch of frustration, there are golden moments filled with humor, wonder, and charm. The writing never weakens with the clever narrator involved, and this entire tale’s gruesome take on morality gives this romp it’s own dark place amongst some of the finest adventure games to date. Double Fine have done a spectacular job at crafting a vivid adventure in The Cave, opening up an unforgettable world that those with patience are sure to fall into for hours on end.