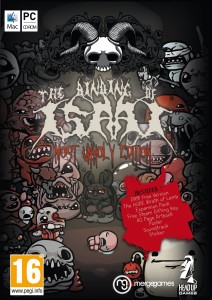 The Binding of Isaac was first released back in October of 2011. Since then, this little Indie title has swept up high praises and high sales the like of which many AAA titles would turn green with envy over.

What does runaway success of a digital release always lead to?

No, it’s not the death of the physical game – in fact it’s quite the opposite. The Binding of Isaac: Most Unholy Edition is a boxed collector’s edition of the indie game. It comes packed with the game’s soundtrack, an art book, a poster, and some stickers. There’s also the rather large “Wrath of the Lamb” expansion that includes a hundred new items, bonus characters, and a couple dozen new enemies and bosses. 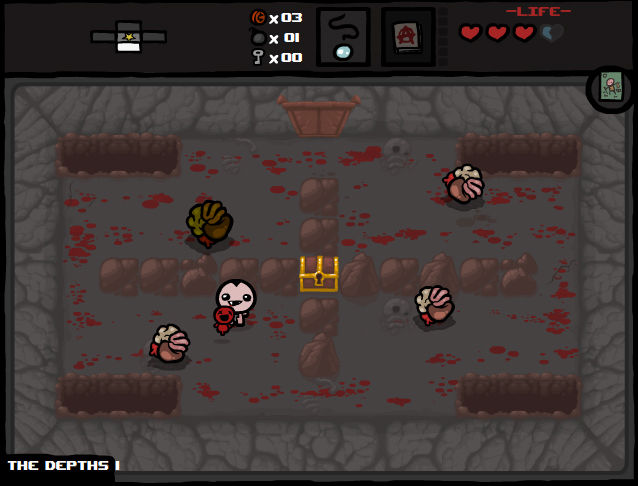 Creating a retail version of an indie title may seem a bit like a sell-out move, but there’s more than enough here to warrant your hard-earned cash.

If you like super-hardcore, spill-your-brains-on-the-keyboard in frustration video games that is.

Isaac’s mother likes the Christian programming on her television a tad too much. After years of compulsive watching she begins to hear God’s voice in her head, it tells her to separate her poor son, Isaac, from the evils of the world. No toys, no friends – a pretty miserable existence.

But it didn’t stop there.

When the voice eventually tells her that slaying her son is the only way to save him from the evils of the world, Isaac escapes to the basement.

Much like Alice heading down the rabbit hole, this is where the adventure begins (and where you, dear player, come in). 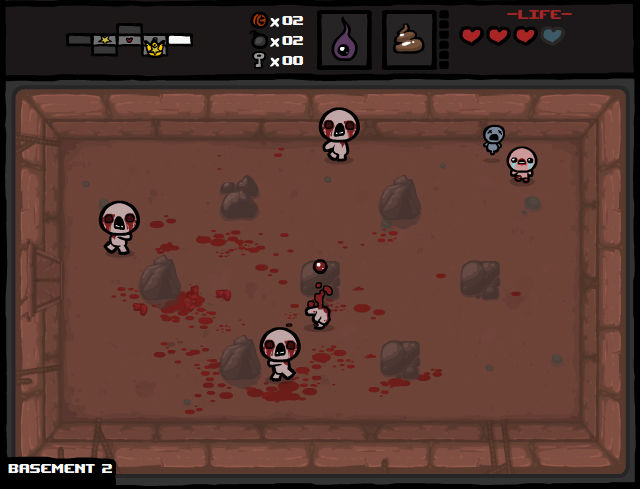 The Binding of Isaac is a two-dimensional action RPG wherein you’ll traverse randomly generated dungeons, come across enemies whose attack patterns vary almost as much as their visual designs, and items that are gross to watch when you activate, but effective in their execution.

It’s not every game that lets you pull out Mom’s Bra as a reusable item that allows you to petrify all the enemies in a room, or makes your character have an eye poked out, but as a result the eye now floats around and helps attack enemies.

You’ll need these items though, the game isn’t easy.

This might not be a barrier to entry, but the game’s biggest hurdle is the perma-death. When you die, that’s it. No items, different dungeons, and just a bit more experience to show for it once you start over.

What The Wrath of the Lamb expansion does, however, is alleviate some of those feelings of despair and shouts of “THIS WAS A FU**ING WASTE OF TIME!!!”. This is due to its most unholy addition of bonus characters. 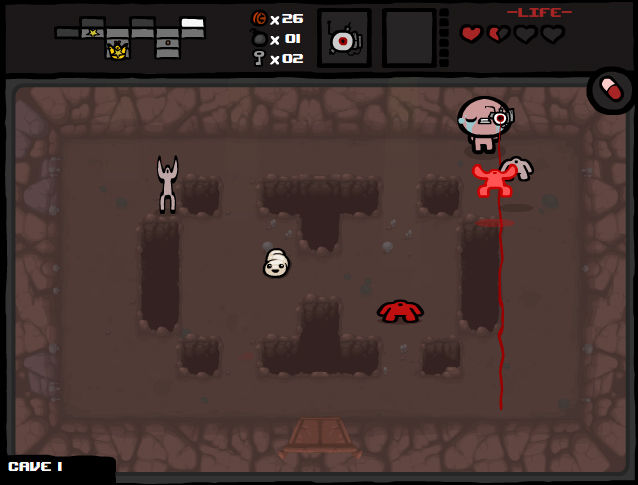 Though it doesn’t really make sense in terms of it being Isaac’s story, once you’ve found a character while exploring a dungeon, you’ll have unlocked them forever. These characters not only have different stats, but also special abilities they can use.

Eve, for example, is faster than Isaac, but has less health. On the other hand, every time she takes damage a raven appears to peck the snot out of every enemy in the room. This was very handy in the game’s many, varied boss fights.

While the bonus characters by no means completely ease the pain with regards to the whole perma-death thing, they do manage to soften the blow – it’s not always a useless quest down the basement chute.

The art design of the Binding of Isaac is nothing short of fantastic, making the art book that comes with the Most Unholy edition worthy of your attention.

The game is full of the most vile, disgusting things you could imagine: severed heads shoot tears of blood at you, disfigured babies send swarms of flies to consume you, shop rooms are usually party to a dead child who has hung himself and, hell, Isaac’s basic attacks are based around him crying tears at enemies. It’s disturbing. 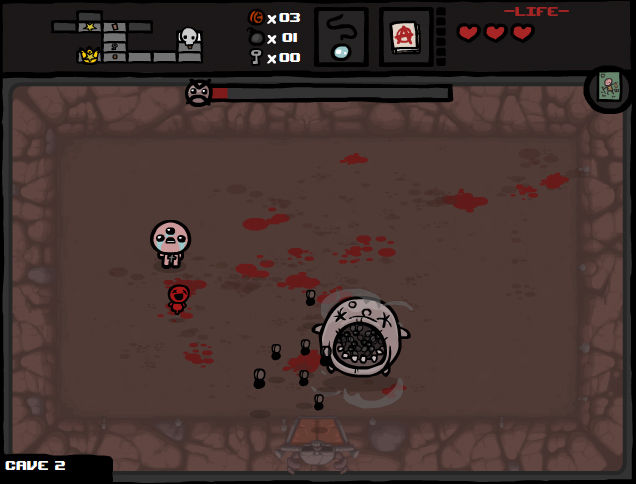 While at the same time… it’s all very cute. In short, it’s a hipster’s dream come true; irony, irony, and more irony. The art style resembles something befitting of My Little Pony Island Adventure, but the practical notion of what’s going on in game is more horrifying than anything that’s been in a video game before. Except, of course, the ending of Mass Effect 3. That literally made me barf.

The sound design and soundtrack, on the other hand, are nothing to write home about. Not that they’re bad, but they’re just not very memorable – except for one unforgettable sound effect: the little plop as you attack piles of poop that replace what would be barrels or crates in any other action RPG. That sound sticks with you.

The Binding of Isaac: Most Unholy Edition is an indie game that’s made it big. If you’re not a fan of games with a more challenging difficulty and a cruelly harsh punishment for death, then don’t feel like you have to buy this game on principle. 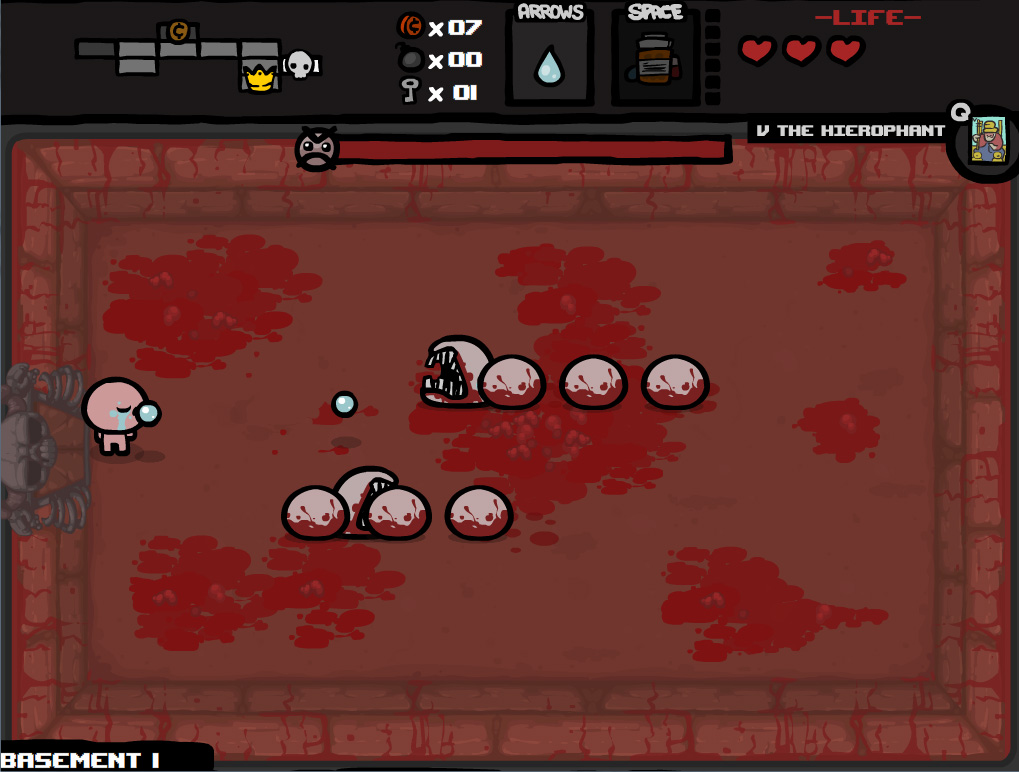 Though it might surprise you – I’m not usually a fan of either of those things, and I adored this game. Everything that comes with it in the Most Unholy edition is icing on an already very nice cake. So if you haven’t invested in Isaac already, and all that perma-death and nightmarish design stuff hasn’t put you off, then the Most Unholy Edition is the best Binding of Isaac experience out there.

Oh, and before you worry about this being a physical edition and thus always needing the CD – the package comes with a Steam code for the game. So there’s no need to ever even open your CD drive.