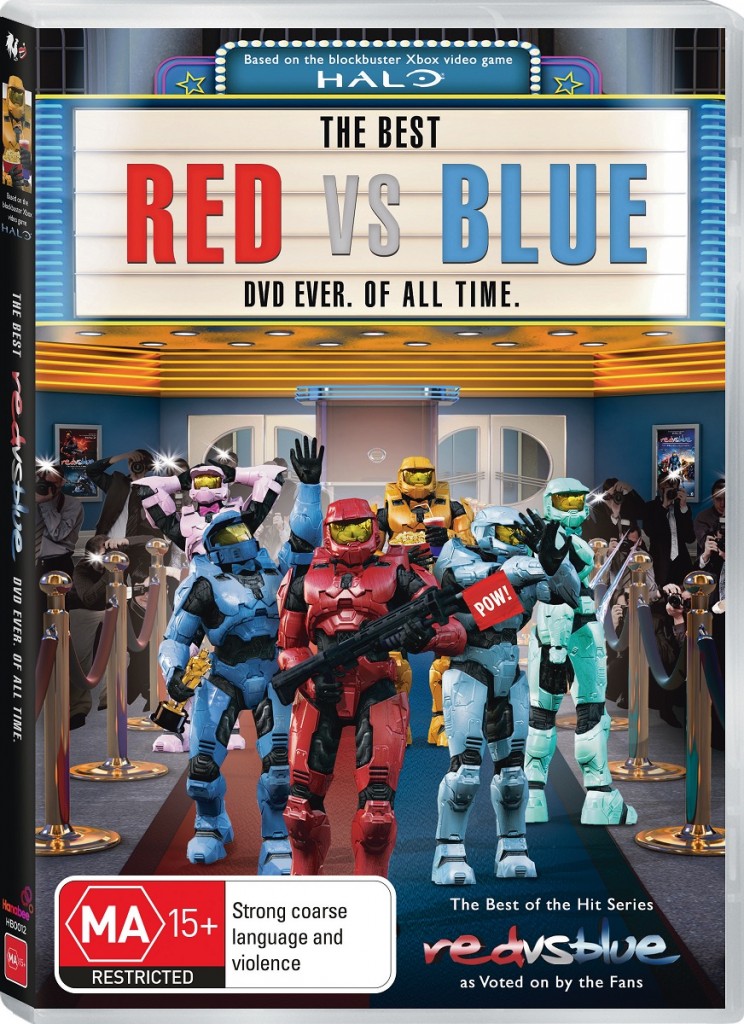 Red Vs. Blue is one of the longest running Machinima series of all time. What started out as a group of guys just playing Halo and recording some hilarious clips of the game has turned into a phenomena of its own. As far as I know, the series is currently on its tenth season and is still going strong. In fact the series has maintained a comedic quality throughout most of its tenure and this best of DVD reflects that.

Red Vs. Blue follows the story of the Red team versus the Blue team of characters set in the Halo video games. The series is generally quite funny, but as you’ll see from this best of, it gets more and more serious and less and less entertaining as the series numbers increase.

So in this best of DVD, we have what appears to be some kind of award show where the fans of the series have voted for their favourite scenes in various categories online. The winners of these have been selected for showing in this feature.

So whilst the DVD itself doesn’t really have a story, it doesn’t really need one. I mean, like, this is really something that only the fans of the series would be picking up anyway. For someone new to the franchise though, I don’t see this being the best way to being introduced to it. It requires a lot of foreknowledge to get the jokes and references within the show considering that they only sparsely show entire episodes on the disc. 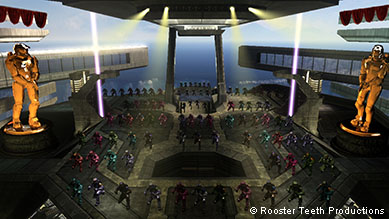 I have to admit that I have seen a fair few entire seasons of Red Vs. Blue in the past (I stopped when Monty Oum started doing the well choreographed CGI scenes) and even I couldn’t recall some of the scenes that had won awards. I’m not the die-hardest of fan with this show, so this has impacted my viewing experience a little bit.  For example, the clips from the earlier episodes were absolutely hilarious and I can absolutely agree with them being in the best of show-reel. However, as we get more and more into this CGI misrepresentation of the core concept of Red Vs. Blue, it becomes abundantly clear the series has suffered a massive decline in quality from a storyline and writing perspective.

How do you rate a show like this visually? I mean, from a gaming perspective, it looks just like Halo does only you have to account for when each generation of game was originally released. You could look at it from an animation perspective, in which case it isn’t very fluid and it is a bit jerky at times. And obviously speaking, a lot of the earlier effect work was very stuck over the top, so to speak.

I’d say that visually, the Red Vs. Blue series has transferred on to the DVD format quite well. There didn’t seem to be any kind of hitching or stuttering or any kinds of negative aspects to the overall quality of the show.

What I actually liked about the visuals though, was how they’ve re-purposed one of the more straightforward maps from Halo 3 into the setting of the award show. It worked really well for this award ceremony and I never would have linked that map with this kind of thing until the guys over at Roosterteeth had thought of it. I also really enjoyed how this ceremony brought back a lot of old characters from the show, and seeing them represented visually once again was quite enjoyable to watch. 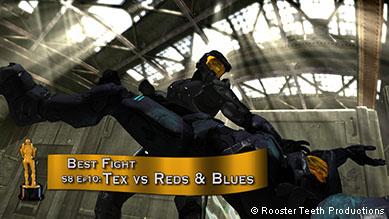 The one thing I didn’t like about this show visually was that they showed segments of the incredibly well choreographed fight scenes done up by Monty Oum. Now this guy is a genius, I love his work, but does his stuff fit Red Vs. Blue? No. No it does not. As a once off gag for a season, it would have been tolerable, but for them to still be using more and more in-house footage it really feels like they’re killing what made the franchise great, which was a bunch of jokes spoken through some poorly puppeted Master Chief clones.

Much like the visuals, this is a hard one to judge. This is because of the nature of this particular DVD. You see, some of the really early episodes of the series were very obviously recorded with a low quality set up whilst the later episodes are very recognisably recorded with higher end gear. This creates a kind of unbalance in the overall audio quality simply because of the nature of the series.

As for the disc itself, there are no audio mistakes or errors present from what I could tell. The audio plays in sync with whats happening on the screen which is to be expected of this kind of product.

I really liked the way that the award show was scripted. The voice overs really brought the script to life and it added that classic Red Vs. Blue feel to the ceremony. This is important because the show needs to feel authentically Red Vs. Blue for it to have worked. And it does, so that’s good. 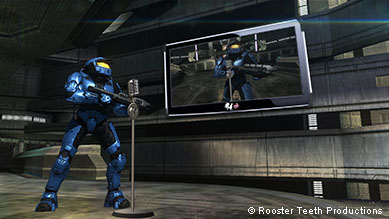 I was a little saddened by a lack of any real bonus features with this package. The stuff included on the disc were nothing more than previews to other Roosterteeth shows that are currently available online. Whilst not having a prolonged bonus feature section doesn’t damage the value of the disc, it also does nothing to enhance it.

Overall The Best Red Vs. Blue DVD Ever. Of All Time. is a great purchase for any Red Vs. Blue fan. However, if you’re a newcomer to the franchise you may not get all of the jokes and references made within the show which may cause your viewing experience to be dampened. Fortunately, Roosterteeth air all of their Red Vs. Blue episodes online and you can catch up on those if you’re really interested in checking this series out.