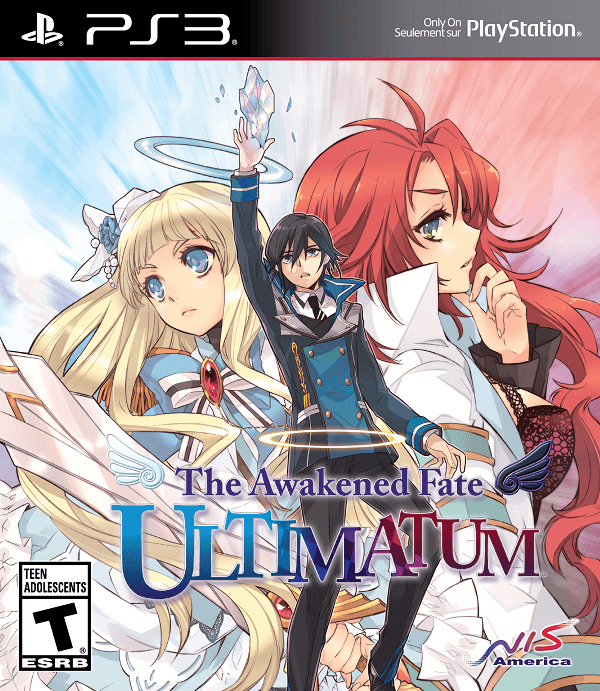 Overview
Two years ago, NIS America released what can best be described as a spiritual successor to Z.H.P. Unlosing Ranger in the form of The Guided Fate Paradox. An enjoyable story with a likable cast of characters combined with interesting gameplay elements made The Guided Fate Paradox a worthwhile title. Now NIS America has brought the game’s sequel, The Awakened Fate Ultimatum, to the West. A number of changes have been made to the original game’s formula but is it still worth picking up?

Story
Shin Kamikaze had a difficult life growing up and because of this he distrusts those around him and never really interacted with the world. While he may be a loner, he did have a fairly normal life until one day while walking home from high school he is attacked by a group of devils. Before he is able to understand what is happening, he is grievously wounded by these devils and only with the help of an angel named Celestia and a devil scientist named Ariael is he able to stay alive.

This is only the beginning of the story as the only way Shin was able to remain alive is thanks to a Fate Awakening Crystal being inserted into his body and given half of an angel’s soul and half of a devil’s soul. Thanks to the crystal in his chest, Shin now has become God and must enter into the battle between angels and devils in a story that may have less humor than the first game but makes up for it by keeping a tighter focus on the storyline. 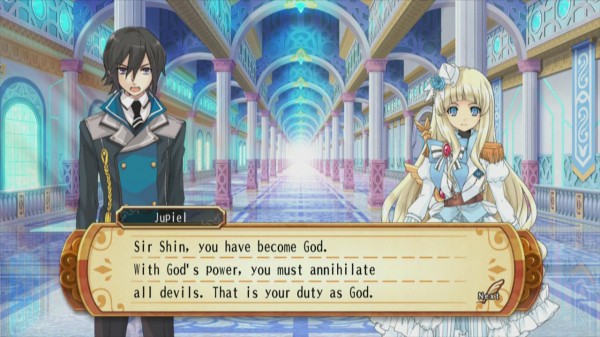 Both Ariael and Celestia are developed well enough for players to care about what is going on, especially since they will be spending a lot of screen time with each girl in rather long conversation sequences. Now there are still a few humorous moments throughout the story and most of this humor comes from interacting with these two girls but it is worth noting that the tone throughout the story is far more serious this time around and also not quite as complex as the previous game, though an interesting choice mechanic has been implemented instead.

Over the course of the game players will be presented with numerous decisions that they will have to make and while some may seem rather innocuous there is a lot of gray area on play here. The core aspect of the decision system is to show whether the player is leaning towards the Angels or the Devils with each choice providing the player with Crystal Points that will be used to upgrade skills on the corresponding side. 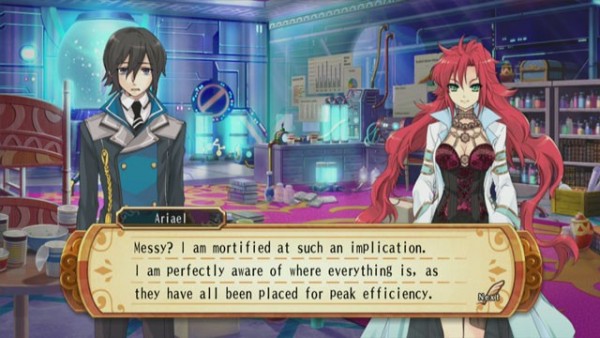 What makes it interesting however is the fact that the outcome of these decisions are usually not as one would expect. Choosing to try and do something good may result in a much worse outcome than if you had chosen a darker route. At other times there isn’t even a good option to choose from as players will know that someone will need to be sacrificed regardless of the player’s choice. That being said, many of these decisions don’t seem to carry long lasting consequences outside of the immediate results until the end of course, but even then there is always a ‘True’ option to pursue.

Gameplay
Not only is The Awakened Fate Ultimatum a bit of a darker title; it also is one that has shrugged off nearly all of the mechanics of the past title and most of the complicated systems at the same time. While still a roguelike that will punish the player if they die, it is far simpler to control this time around as everything has been streamlined, making the title far easier than the earlier game even though you always have to prepare for the worst when you enter a dungeon.

As you enter a dungeon, Shin will now be by himself with no companion fighting alongside him and players will need to explore dungeons with each one having a set amount of floors while battling against the enemies they come across. Combat works in an easy to understand manner, especially now that the equipment has been limited compared to the original. If you happen to fall in combat, players will lose every item they have equipped and anything they may have been carrying with them. While this is a punishment, players will also no longer have to worry about their levels being reset to 1 at the start of every dungeon as Shin will now level normally and retain his level no matter what dungeon he is entering. 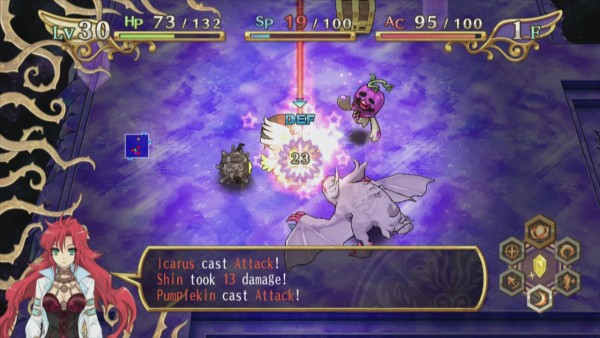 New to this system is the ‘Deitize’ mode. Since Shin now has part of an Angel and Devil soul inside of him, he can now transform into an angelic form and devil form in combat. As you travel through dungeons you’ll encounter enemies that are angelic as well as demonic and while you can choose to fight these enemies in base form, transforming into the opposing form through a simple tap of a button increases the damage you deal while also taking less damage.

These forms level up separately from one another using the Crystal Points mentioned earlier (gained through choices and basic leveling and fighting) and players will be able to choose how they wish to level these forms through a level-grid system that is easy to understand and contains a number of skills that can be unlocked. Another notable thing about these forms is that the various stat boosts and focus are built around different aspects and their skills match that. The angelic form features abilities and boosts dealing with destructive power and wide-ranging attacks while the devil form is more defensive, boosting the player’s defense and featuring skills that allow for easier running away and draining health from opponents. 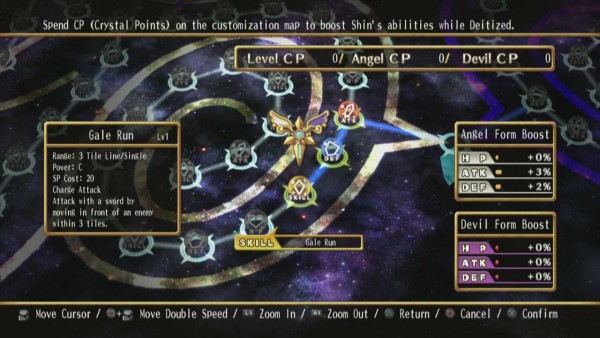 Despite being more streamlined and easier than before, players will still need to prepare for random spikes in difficulty that occur throughout the title, especially after a few hours in. As players navigate the floors looking for the way down, they’ll need to worry about traps, enemies that can and will try to surround you, especially when they are two different types meaning that death can and will happen even if you are prepared. That being said, those looking for a harder title will find The Awakened Fate Ultimatum a far easier experience than the original game.

Visuals & Audio
While I am unsure whether or not the shift from the original sprite based dungeon gameplay to the new 3D chibi form was Nippon Ichi dealing with a smaller budget this time or attempting to go for a different look (or both), I can say that the shift to the 3D forms is a downgrade compared to the original title. While dungeon exploration is much easier thanks to the view players are presented with, the actual designs of the dungeons, the enemies, and Shin, in any of his forms, will leave players wanting.

This is especially true thanks to the limited customization system as well as how well designed the actual character portraits are during the visual novel sequences. These dialogue sequences are the same as one would expect for a game such as this and the character designs and backgrounds have a nice level of detail which is found lacking once you enter a dungeon. 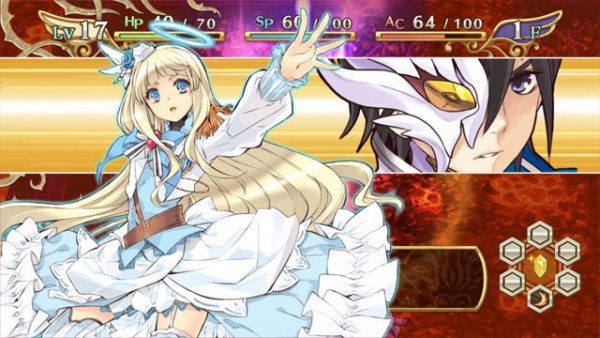 The Awakened Fate Ultimatum comes with a newly recorded English dub as well as the original Japanese voice track which will please both types of gamers as the English voice actors portray their characters well. As far as the soundtrack is concerned, there are tracks ranging from heavy rock music for combat and boss encounters to simple background music for dialogue sequences to grand dramatic pieces for main story moments meaning that there are some great songs here, including the opening theme.

Overall
The Awakened Fate Ultimatum may be the sequel to The Guided Fate Paradox but just like how there is very little story crossover between the two games, very few of the original mechanics have survived in this release. Instead the experience has been streamlined and made more accessible to newcomers and in no way does this make The Awakened Fate Ultimatum a bad game as it still provides a solid experience with a serious tone, but one that is watered down and far easier than fans of the original will expect.