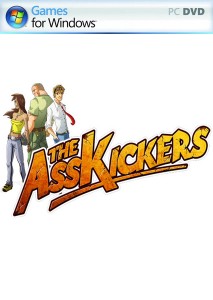 The Asskickers is the first title to come from indie developer AGO games, and is meant to ape the styles of classic beat ‘em ups like Streets of Rage and Double Dragon. There are three modes on offer; a six levelled story, survival and time attack. Both the story and survival modes can also be played via local co-op.

‘The Asskickers’ is a brave name for a first release, and had me expecting a lot of tongue in cheek attitude and fun beat ’em up action. What I actually got began as follows:

At this point I am more than ready to beat something up. Perhaps this is the idea. Satisfied that the bugginess is just an elaborate trick to increase my enjoyment of the game, I promise to forgive the Asskickers this opening salvo if the gameplay holds up.

The Asskickers does go in for a bit of anti establishment attitude, with an introduction describing a corporation ruled mega state where the police are privately owned and the politicians corrupt. The action kicks off with a confrontation between your character and a pink-shirted idiot who turns out to be the son of the current world leader. The police pay no attention to your regular Joe, immediately smacking you on the head and throwing you in jail. The goal is escape, and kick ass. Simple.

It’s a nice idea to try and tack a bit of social commentary onto a beat ‘em up, but sadly it’s just not pulled off. The writing is dull, unfunny and skippable, and the opening text even has a few basic errors (thespacebarwasobviouslybroken).

Admittedly plot and setting aren’t what beat ‘em ups are all about, so the poor writing can be forgiven – as long as the gameplay holds up! 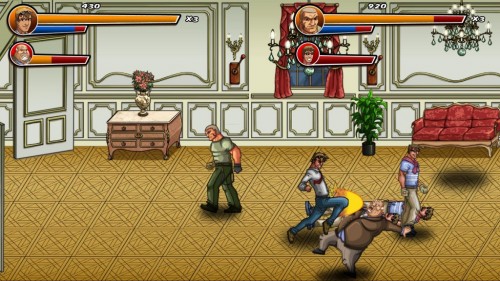 The gameplay, it turns out, does not hold up.

The three characters on offer are pretty standard fare. There’s the tough girl who’s quick but weak, the balanced good looking guy, and the bulky tight t-shirt wearing muscle heap (a ringer for Stephen Lang’s bad guy in Avatar). They have a few funny lines between them, but don’t really register as individual characters.

There is no character progression and without much personality on offer your choice is really down to your play style – or it should be. I usually go for quick characters but the difficulty is so badly designed it’s almost impossible to get anywhere past level two unless you pick the bruiser, and this is on easy.

The enemies are equally lacking in any charm, with riot police, frat boys and incredibly annoying drop kicking women forming up the bulk of the onslaught. They have a habit of walking off screen where you can’t hit them but they can hit you, and occasionally get stuck there so that you can’t progress any further.

Bosses are bosses because they have big health bars, but do provide a bit of a WTF diversion from the rest of the game when at the end of the fight you bend them over and spank them (!). It’s a tiny shred of personality, but it’s stuck in a big heap of frustration and boredom. 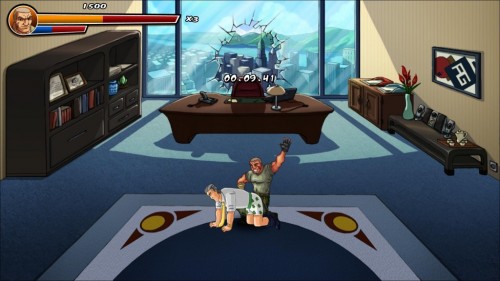 Enemies can only be hit when you are perfectly lined up with them, and when you are, you can’t block their attacks. The lack of blocking reduces the gameplay to lining up and button mashing, which would be all well and good if the game actually detected half of your key presses.

And it’s the detection that is the biggest nail in the coffin. I can live with having to be precise, and can almost deal with the lack of blocking, but when the game ignores half of your input and the majority of the rest misses anyway, it’s really difficult to want to keep going.

Another part of the game that deserves some special attention are the pick ups, somewhat ironically named given that half the time you can’t actually pick them up. See that health restoring burger? The one that’ll stop you from having to replay the entire level right from the beginning? You can’t have it. You can dance around it spamming the use button all you like, but that little burger is actually super glued to the ground in an elaborate ploy to raise your aggression levels, thus making you more likely to keep beating stuff up (that’s what I told myself at least).

Combine all of the above with the way you get busted back to the very beginning of the level despite having passed a load screen and/or reached the boss fight , and that ‘No’ button on the continue screen just screams to be hit.

Co-op lessens the frustration a little, and so do the time attack and survival modes, but really, the gameplay is just not fun anywhere, anyhow. 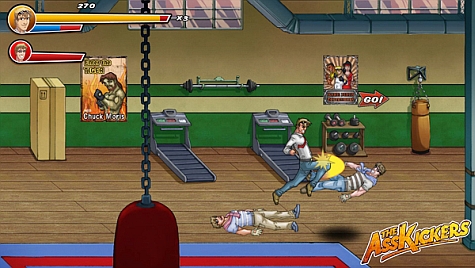 The visuals are one of the games only redeeming features, and do pretty well to ape the retro beat ‘em up style without being completely copy cat.

The audio is a bit of an afterthought, the background music especially. An awesome soundtrack can really lift this kind of game, but sadly in the Asskickers this is completely lacking. What starts out promisingly enough in the menu screens completely evaporates in game – a couple of dull background tracks and sometimes no music at all.

As for the sound effects the punches and kicks do have a nice retro smack to them, but enemy characters only have one attack sound and when you have a handful of them on screen all doing it at the same time, it becomes annoying incredibly quickly.

The Asskickers has a lot wrong with it (including some snippets I didn’t mention, would you believe), but what it all boils down to is this – it’s not fun to play:  it’s a chore. Avoid it.