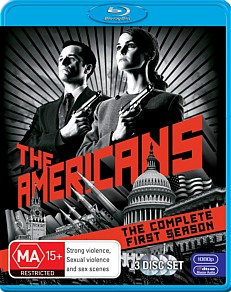 The Americans is a period drama set at the height of the Cold War in the early 1980’s. It stars Keri Russell and Matthew Rhys as Elizabeth and Philip Jennings, two KGB intelligence agents who have spent 15 years undercover, living in Washington, D.C. as a married couple. The shows brings a level of authenticity due to the fact that its creator and show-runner Joe Weisberg is a former CIA officer, having worked for the organisation for 4 years. With its second season premiere around the bend, 20th Century Fox Home Entertainment has brought The Complete First Season to Blu-ray as a 3-disc set. 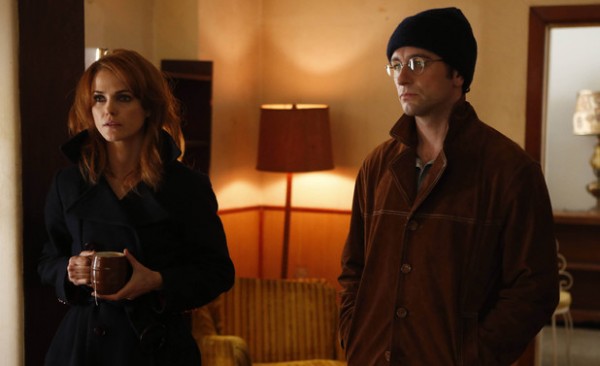 Philip and Elizabeth Jennings may seem like the anchors of your average American, nuclear family on the outside, but in reality these are highly trained and conditioned KGB operatives; Directorate S sent agents, living with this façade for 15 years. Even their two children, Paige (Holly Taylor) and Henry (Keidrich Sellati), are not privy to their true identity. So while the show may be about the behind-the-scenes actions made during the conflict of the Cold War, it is equally if not more-so about relationships and identification. Don’t let that deter you, however, as this is still a tight, suspenseful drama and not some soppy romance tale. In fact, it begins with a tense, attempted set-up that quickly devolves into a frantic chase. Nikolai Timochev, a KGB defector, is the target. Amidst the chaos, Timochev wounds the duo’s partner, Rob (Chase Coleman) before being overcome and outmatched in hand-to-hand combat with Philip. Keeping him in the boot of their car, things get dicey when an FBI counter-intelligence agent, Stan Beeman (Noah Emmerich), moves right next door to the couple. Naturally, his instincts fire, but he often finds himself one step, even two steps behind. His wife, Sandra (Susan Misner) convinces him that not everyone is a suspect, and he concedes, warming up to his new neighbours. 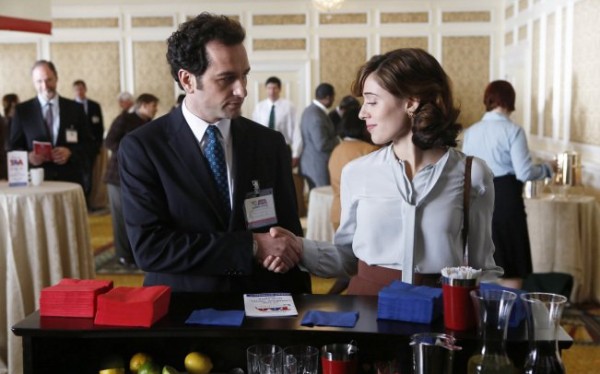 As the season progresses, we witness double agents, even triple agents working both sides of the war. Appearances must be upheld, and even with their long “tour of duty”, so to speak, discovery of a KGB mole working for the CIA sets off alarms within the Russian organisation, with the Jennings no safer from the proceeding investigation than anyone else. This leads to Claudia (Margot Martindale, the Jennings’ supervisor, taking no risks in weeding out the traitor, which breeds a contemptuous working relationship between herself and the Jennings, and in particular Elizabeth. The chemistry between Keri and Margot, which is understated and raw, is one of the highlights of the show. Margot is an extremely talented actor, who has found herself in such varied roles across multiple television programs over the years, so it’s fantastic to see her again here. The entire cast delivers, and as the Reagan administration amps up its propaganda and responses to the Russian threat, so too do the performances and the pace. Speaking of, I felt the first 3 or 4 episodes of the season were quite melodramatic, as it focused on the sometimes absurdly ups and downs of the Jennings’ “marriage”. It’s only when episode 8 hits that things significantly pick up, and all that needed to be established has been. Initially, I was sceptical of how the creators hoped to cast the Russians as the sympathetic figures in this equation, but they do so quite successfully. In the end, both nations were afraid of each other, lived the same fears and heard the same, scary stories; so it’s just about showing two sides of the same coin. 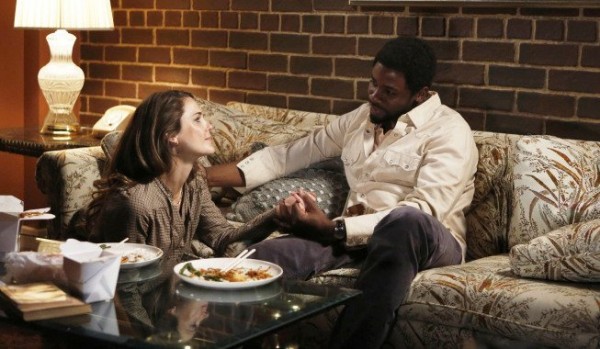 As opposed to the decidedly black and white perspectives of both America and Russia during the Cold War, The Americans represents the true nature of life; it is never that simple. Instead, the world could be viewed in different shades of grey… both tonally, and visually. The Americans often looks soft and muted, with a low contrast composition that reflects the general atmosphere of the time, but has very little impact on the viewer. The transfer itself is of good quality, but the often dreary aesthetic almost tricks the mind into thinking it’s not. In regards to production, the crew did an excellent job at recreating the era, from the costume and set design to the use of period-accurate items, in both pivotal and ancillary instances. The lossless DTS-HD Master Audio 5.1 mix is clear and crisp throughout, with slight fluctuations during action sequences. Castilian Spanish and Spanish (Latin) language mixes are also available, along with Canadian French, Danish, Finnish, Norweigan, Portuguese (Brazilian), Swedish, English for the Hearing Impaired, Castilian Spanish and Spanish (Latin) subtitles. The score by Nathan Barr is appropriately spy-tastic (I know, not a word), incorporating staccato strings and a beautiful cello for the more emotional cues. Since his deft work on True Blood, his expertise continues to shine through. 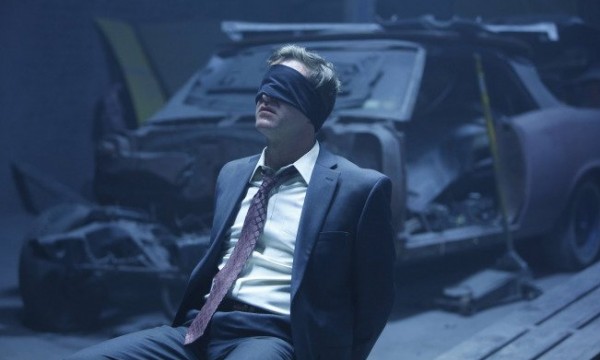 The Americans: The Complete First Season is decently padded, with nearly 90 minutes worth of special features. Spread across all three discs are a collection of Deleted Scenes, running about 12 minutes in total. Of note, a few are merely extended, alternate takes, but there are two successive scenes cut from Episode 11 – “Covert War”, which show Stan visiting the hospital after discovering that his wife had gotten into a car accident and fractured her leg, and then arriving home with her in a wheelchair, refusing his aid. This whole plot point was excised from the show, and it’s interesting to see the different route the writers were planning for the embroiled couple (although the end game would largely be the same). A Gag Reel brings some levity, as we see just how hopeless the cast is at navigating forks full of food to their mouths. The aforementioned special features are all in 480i SD, while the following are in 1080p HD. ‘Executive Order 3579: Exposing The Americans’ is a 13 minute long featurette exploring the subject matter. Weisberg tells of how it only took him 3 weeks to get accustomed to lying to everyone around him back when he was working for the CIA, and how each script they wrote was sent to the CIA for review and approval, which was usually swift. 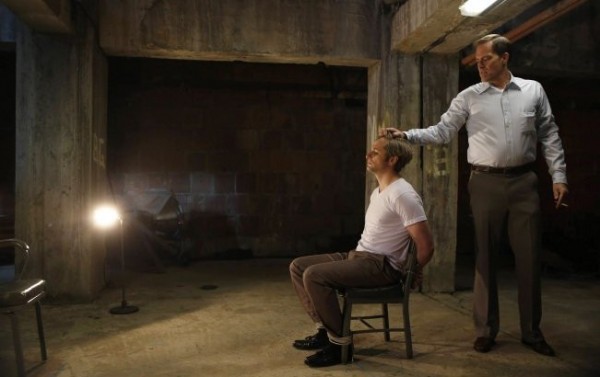 ‘Perfecting the Art of Espionage’ details the real-life practices of the KGB and the U.S. that were implemented into the story, such as the Russian martial art of Systema, the “Secretary’s Offensive” (marrying secretaries of intelligence officers to coerce and gather intel) and the case of the Mitrokhin Archive – when a KGB Major and First Chief Directorate defected to the United Kingdom in 1992 and brought with him copies of notes on secret KGB files. ‘Ingenuity over Technology’ is the final featurette, and looks at the limiting technology of the time, which forced a certain amount of human ingenuity in order to achieve covert goals. Lastly, there is an Audio Commentary track on the Season Finale, “The Colonel”. Weisberg, Emmerich and Executive Producer, Joel Fields, speak extensively on every scene. Among the insight is an explanation on why Xerox machines are better than radios for shooting scenes where the Jennings needed “white noise” to ensure their talks remained private, and a humorous answer on how exactly Philip’s wig stays on during his rendezvous with Martha.

The Americans: The Complete First Season 3-Disc Blu-ray is a very solid release, with a clean 1080p HD transfer and a great, lossless DTS-HD Master Audio 5.1 mix. Its offering of extras is substantial, although an added commentary track with our two leads, Keri and Matthew, would have been well appreciated. The show itself benefits from the first-hand experience of Weisberg, showcasing excellently crafted espionage and counter intelligence-centric scenarios. Unfortunately, the writing of the home life, relationship-heavy elements can sometimes feel overwrought. Overall it takes quite a while to pick up steam, but once it does The Americans turns into an intriguing, investing drama that somehow successfully garners your sympathy for these individuals, whose allegiance is to a historically negatively painted entity.