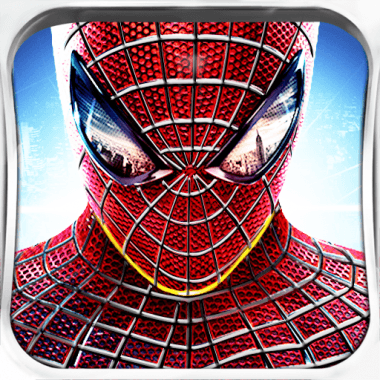 The most amazing thing about The Amazing Spider-Man by Gameloft is how surprised I am. It should be referred to as The Surprising Spider-Man from now on. Movie tie-ins are generally considered to be really average or sucky games, and on mobile devices they tend to be some of the worst crap you could ever possibly play. But Gameloft have lived up to their reputation of providing high-quality hardcore games for mobile devices, and delivered a solid title reminiscent of the classic Spider-Man 2 web-heads fell in love with back in 2004. What’s even more surprising is that while this is the 2nd Spider-Man title by Gameloft, they actually went back to the drawing board and pretty much reinvented the gameplay all together resulting in a very, very different type of game. While it isn’t perfect, The Amazing Spider-Man is easily one of if not the best movie-based mobile game I’ve played and is definitely worth picking up if you’re a Spider-fan! 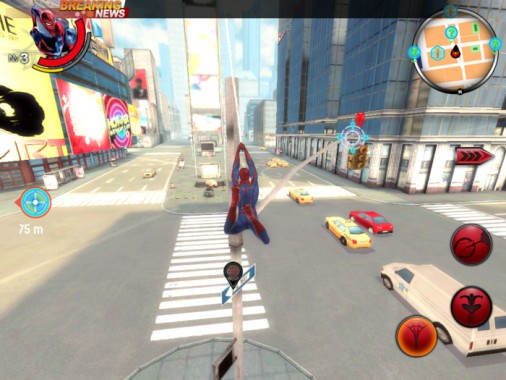 First thing that you’ll notice is how freaking awesome it is to swing around Manhattan from your mobile device. While the web doesn’t actually have to connect to any particular building, this is easily forgiven as it does make navigation easier. With a simple tap, you can swing to insane heights and letting go will have you lunging towards the ground creating an intense adrenaline rush. Speed and crazy acrobatics provides a really rewarding experience which really fights the problem most sandbox games have – navigation is typically boring, but here it’s probably the most exciting aspect of the game. Players can also take advantage of Spidy’s web to create a zip-line to travel at even faster speeds, which is also effective. Of course, navigating a city is pointless if there’s nothing to do in the city, and The Amazing Spider-Man does deliver to some extent. While there is very little variety of crimes to stop in the city (it’s usually just stop the bad guys beating up the cops), challenges are provided which do switch up the gameplay a little bit. What’s really surprising however is how much the camera doesn’t suck. Most Spidy games often have crappy cameras, yet even after completing the entire storyline, I had no complaints for the most part. That being said there are a few bugs here and there, but most are so insignificant it’s easily forgivable. 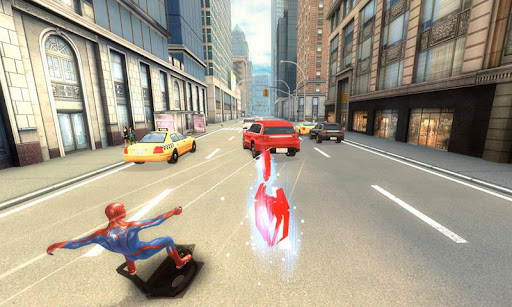 But Spider-Man does more than just swing around a city right? Doesn’t he kick all kinda of bad-guy butt and stuff? You bet he does! Unfortunately combat can get a little repetitive. Luckily Gameloft attempt to distract you from this with a variety of mission objectives such as chasing people, stealth missions, etc. However the combat while decent in The Amazing Spider-Man, it doesn’t have the same impact as it did in Gameloft’s last Spidy game, Ultimate Spider-Man: Total Mayham. That being said, it’s not half bad. While there is a nice tech tree to level up and buy new moves and upgrades from, none of these unlockable moves really improve gameplay at all, and are easily forgotten. Furthermore switching from combat mode to navigation mode is awkward, and the lack of variety in enemies is very dissapointing. Unlike every other Spider-Man game made ever which features multiple super villains, this one features one – The Lizard. So this lack of variety leads to some very repetitive and unsurprising gameplay. Perhaps if some more were thrown in, the game would’ve been a little more interesting. The game’s biggest problem however is a lazy and confusing one. At a particular part of the story mode, a section has Spider-Man lose his powers. But he only loses the ability to web swing. He can still zip-line, crawl walls, everything else. The worst part is, the film it’s based on clearly states that shooting web isn’t even a power, it’s a technology he uses so the entire section of the game is just annoying. 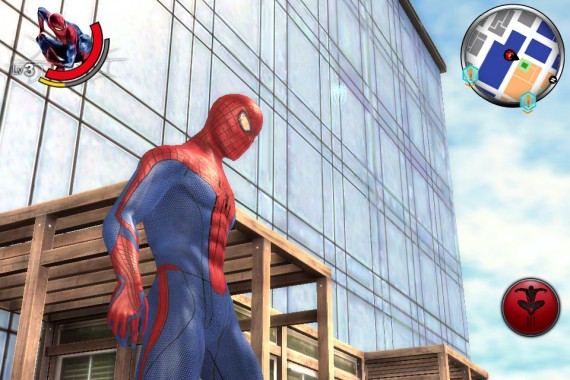 The Amazing Spider-Man clearly doesn’t have the same actors as the film it’s based on. Voice acting is cheesy as hell and the only thing in this game worse than that is the terrible dialogue the poor voice talent was forced to perform. I cannot stress how painful it is to hear the Amazing Spider-Man actually call himself ‘The Amazing Spider-Man’. Music however is very typical of the Spider-Man universe and does a great job of setting the tone of the game. Graphics on the other hand are much nicer. While cars can look a bit block-ish, character models and textures are absolutely stunning and the frame rate is perfect. I don’t know how they done it, but there is nothing more rewarding than getting some massive air and looking out at the horizon and seeing the beautiful scenery with buildings as far as the eye can see – and that you can travel too. Simply put, it’s amazing. See what I did there? 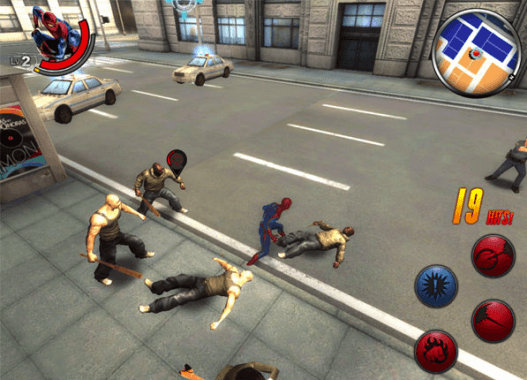 The Amazing Spider-Man is a top quality mobile game. While it does suffer from a few flaws, it’s still a very solid and fun game to play. Gameloft have perfectly captured the feeling of being Spider-Man with the navigation aspect of the game. While the combat isn’t perfect however, it is still charm to play. It’s clear a lot of effort went into this title and it has certainly paid off. This is a must have title for Marvel Superhero fans and solid evidence that not all games based on films are cheap cash-ins. Hopefully we can see more Spidy titles from Gameloft in the near future.