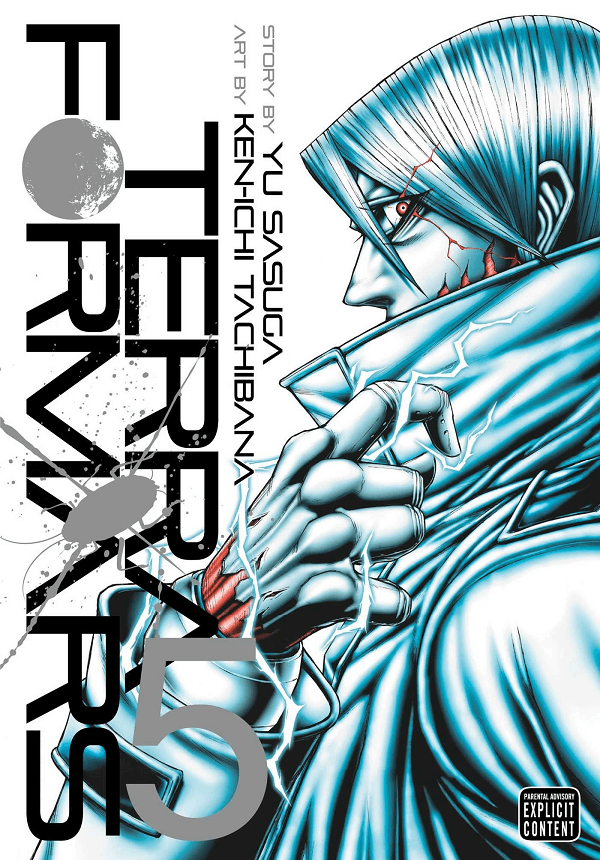 Overview
With Annex I crash landing on Mars and the crew members forced to split into six different squads, things have only grown worse for the surviving members as members of each group have been slain by the cockroaches. Scattered across the unforgiving landscape of Mars, Squads 2 and 3 have managed to stay alive with minimal casualties despite encountering unusual cockroaches that share the same powers as those who died on the BUGS 2 twenty years prior. With volume 4 of Terra Formars leaving things off with Adolf and the rest of Squad 5 under attack by a massive force of cockroaches, how do things progress in volume 5?

Story
Terra Formars Volume 5 picks up at the start of Adolf and Squad 5’s battle against the horde of cockroaches and extremely bulky cockroach that they were facing off against at the end of the last volume. Unfortunately, as is the case with Terra Formars, one of the highest M.A.R.S. Ranking fighters is instantly defeated in one blow to provide a shocking death right at the start of the volume before turning back to Adolf Reinhard.

In a bit of a departure from the standard way the story has been told so far, Yu Sasuga reveals Adolf’s history as he continues to use his electric powers to take down as many cockroaches as he can and thanks to this we learn just how hard of a life he has had, making him one of the most heartbreaking characters in the series so far due to the loss of his parents at a young age to the M.O. Operation and the experimentation Germany put him through as a child.

This only gets worse as it reveals that the one light in his life was darkened due to the nature of humanity making what happens to him the most tragic feeling part of the series so far. It is hard to say, especially with the amount of dead bodies that have piled up over the course of the series so far, but what happens to Adolf as well as the rest of his team is the hardest hitting series of casualties that the author has put together so far. This is in part due to his backstory being revealed but also due to the lengths that he went to in order to protect his Squad only to fall in combat, triggering a device he knew nothing about and was implemented by those who used him for their own means as a final tool.

Now I’m speaking a lot about Adolf here because the rest of Terra Formars Volume 5 provides a few panels of vague mysteries, including the location of the strongest member of Annex I on his own, and then transitions into the next sequence of battles pitting Komachi, Marcos, and the now center focus Keiji and Kanako against the unique cockroaches and horde attacking the rest of Squad 1.

This of course means that the volume is still heavy on the fast paced action with a few scientific details about newly revealed base organisms used for the M.O. Operations of characters taking the stage this volume. On the other hand, there is very little story development other than the death of more characters which is disappointing for those who were hoping that some more progress would be made but great for those wanting to see what a few of the not yet shown members of Squad 1 are capable of. As mentioned before, the standout moment comes from Adolf’s stand against the roaches as well as the way that Yu Sasuga chose to insert bible verses from the plagues of Egypt to describe the devastating powers Adolf was wielding.

Artwork
Once again Terra Formars benefits from the larger than average size of the Viz Signature releases as it allows for the detailed artwork to really pop out. With the high level of combat throughout volume 5 there is plenty of gore to be seen with the highly detailed artwork giving every attack look extremely vicious. There are also a number of transformations that the series is known for as Adolf pushes past the normal limits for a human and a few new character transformations also take the stage.

Extra Content
Similar to the last volume, Terra Formars Volume 5 only contains two pages containing brief profiles for four of the members of the Annex project though this time all four are currently on Mars at least. Their profiles give readers a few extra details about their lives which is a nice little inclusion, especially since two are for characters that were barely given any time to shine.

Overall
Terra Formars Volume 5 continues the brutal combat between the survivors of Annex I and the cockroaches that are constantly pulling new tricks out to put down any advantage the Squads have. This means that there really isn’t much story advancement but plenty of fast paced action. Those looking for highly detailed artwork and impressive combat sequences punctuated by an early emotional event involving one of the greatest departures of the series so far will be pleased with the way things unfold in volume 5 and will likely continue to occur throughout volume 6.