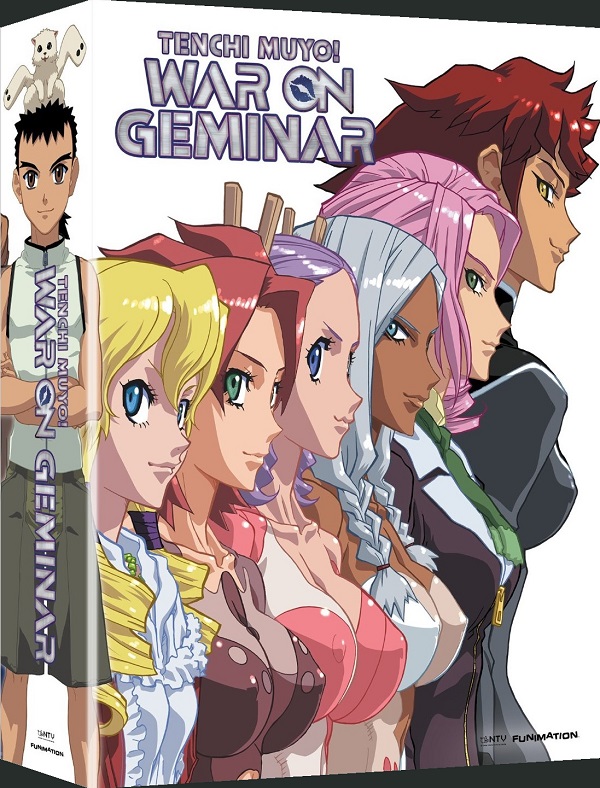 Now after Tenchi disappeared from the spotlight for half a decade, FUNimation has brought Tenchi Muyo! War on Geminar over to North America. However with the focus entirely shifted away from the characters fans have come to love, does the first half of War on Geminar offer an entertaining experience?

Story
Considering the fact that the Tenchi Muyo! series has spanned multiple series, movies and OVAs at this point, some newcomers may find themselves shying away from War on Geminar. However newcomers need not worry about any continuity issues thanks to the fact that while FUNimation did rename the series to place “Tenchi Muyo!” in the title, probably to help sales. 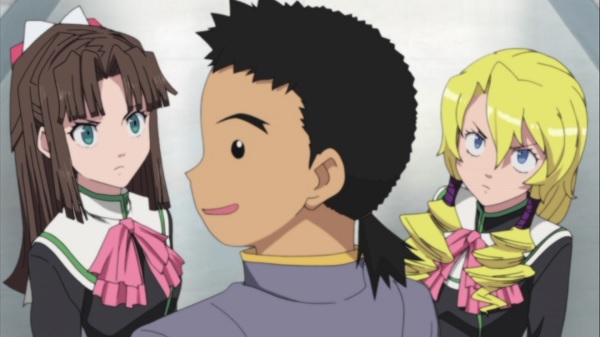 The reason for this being is that War on Geminar never features Tenchi Masaki and while fans will be able to recognize references made to Tenchi’s family in past series, the focus has shifted entirely to Tenchi’s younger half-brother, Kenshi Masaki so while newcomers may miss out on a few references to sisters and other members of Kenshi’s strange family, they will be able to enter the series with ease.

That being said, the story of War on Geminar sees Kenshi transported to a strange world called Geminar where humanoid mech-like weaponry called “Sacred Mechanoids” are used to fight in wars and to defend royalty. One such royal is the newly crowned Princess Lashara and her life is in danger as a mysterious organization would rather see her dead than alive. Kenshi finds himself on the wrong side of things however as he is initially part of the assassination team, thinking that if he is successful, he will be sent home to his own world. 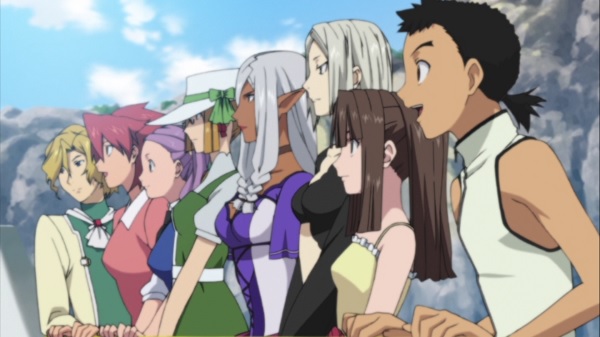 When the assassination fails, Lashara and the rest of the crew upon her floating ship the Swan, take Kenshi in, believing him to be a valuable asset that will ultimately pay off for them in the long run. The reason for this being the fact that Kenshi is capable of piloting an incredibly powerful Mechanoid, a trait that is very rare in men on the world of Geminar, making him valuable both as a bodyguard but also as a potential tool for future power.

As such, Princess Lashara takes Kenshi in as her servant and when she arrives in the “Holy Land” a large academy that is seen as neutral ground for the world, the story shifts gears from one of assassinations and dark machinations to one of comedy, character introduction, harem antics and slice-of-life character development. You see, while there are various scenes presented throughout these first seven episodes that make up Part 1 that shine a bit of light upon the plot to take Lashara’s life and potentially even more than that, the series focuses almost entirely on your standard harem antics. 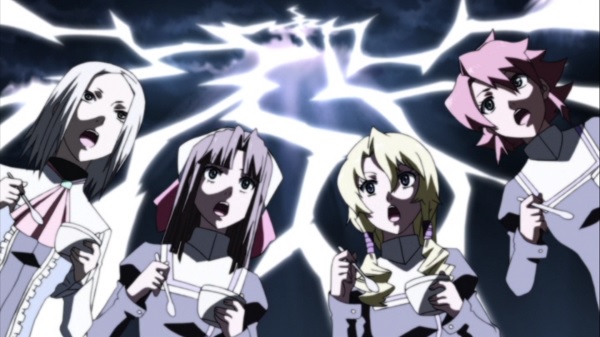 Practically everything from the second episode to the last contained on this release serves to build up the world, develop character relations and expand these characters into a cast that viewers want to care about. This is ultimately essential to a harem anime of any kind, as a simple cast of girls chasing after a male character becomes rather redundant and thanks to the amount of time spent building the characters in Geminar, even with the overabundance the series contains, the anime avoids that pitfall.

By spending this first part of the series focusing on the characters, each of them is given some time to shine and some actual development with Kenshi, making their affection for the man less blind than your standard harem lead. It also helps that although packed full of clichés, including a pillow fight wearing robes which involves stripping the rest of the players of their sashes, everything is played in a comedic manner and even Kenshi remarks about how it seems that the people before him simply did whatever they wanted. 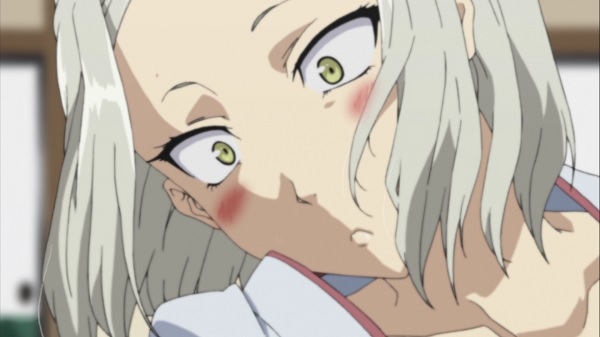 However it is worth noting that every episode in War on Geminar is roughly forty-five minutes long, so there is a lot of ground that could have been covered and by the end of this release, viewers are given a cliffhanger which sees Part 2 of the series rush into the true conflict of the series. It is unfortunate however that it took so long to get to that point, as while I’m more than a fan of harem antics and characters attempting to seduce Kenshi, even some of the most comedic moments of the series are padded in this first half.

Visuals
When building up a cast of characters for any anime series, diversity in both personality and appearance is something that should be aimed for and Tenchi Muyo! War on Geminar takes after its predecessors by offering a very diverse set of characters that, while a bit stereotypical at times, each feature their own unique design, personality and set of themed attire. 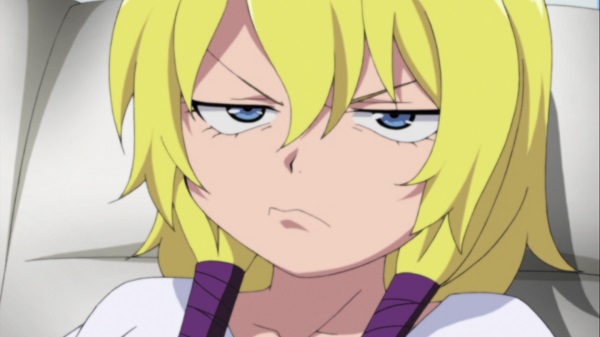 It also is worth noting that the facial animations in War on Geminar are absolutely priceless. Most of the comedic moments of the series usually revolve around the facial expressions of the cast as they react to ridiculous situations and other occurrences throughout the series. They are exceptionally handled and while they may enter the realm of over-exaggeration at times, it only helps makes their reaction all the better.

Outside of the characters themselves, the series features a number of gorgeous backgrounds that are nicely detailed and varied. The series also sports a nicely varied color palette and while minimal in this first half of the series, the combat sequences are nicely animated as well. 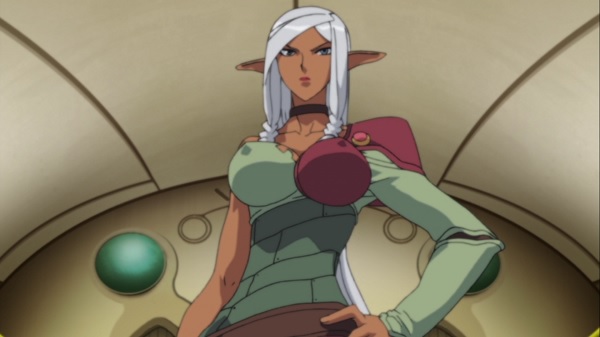 Now, Tenchi Muyo! War on Geminar is absolutely busting at the seams when it comes to fan service. However before those squeamish on the subject turn away, it is worth noting that aside from some female and male butt shots, and some rather obvious attention to detail in some outfits, the series features no actual nudity, though it can certainly be gratuitous with how borderline many of the fan service scenes become. 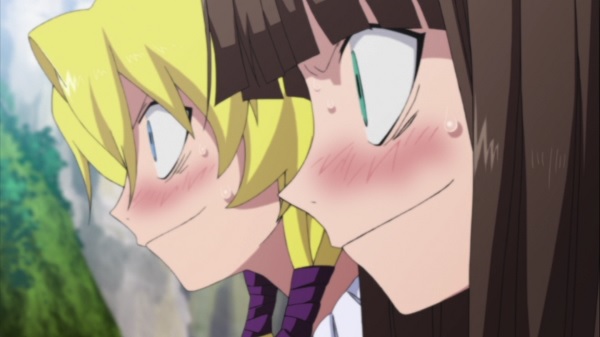 As for the series’ background music, it is rather run of the mill and forgetful which is sad considering the amount of memorable tracks viewers were presented with in past Tenchi Muyo! series. As for the opening theme, we have “Follow Me” by Sound Around which is nice on the ears and enjoyable to listen to while the ending theme is “Destino” by Alchemy+ and serves as a great closing theme to the series in many regards.

Extras
FUNimation decided to add more than the norm when it comes to War on Geminar’s special features. There is of course your standard clean opening and ending theme, trailers for other FUNi releases, information and sneak peeks at the episodes on the disc, and Japanese trailers for the series, but alongside these there are a number of bonus videos and a new take on commentary tracks.

Each of the videos are presented in original Japanese with English subtitles and these include the Making of the closing theme “Destino” by Alchemy+ which features an interview with the band, stills from the recording of the background music in the series and a recap that covers the events that occur in the first two episodes of the series. 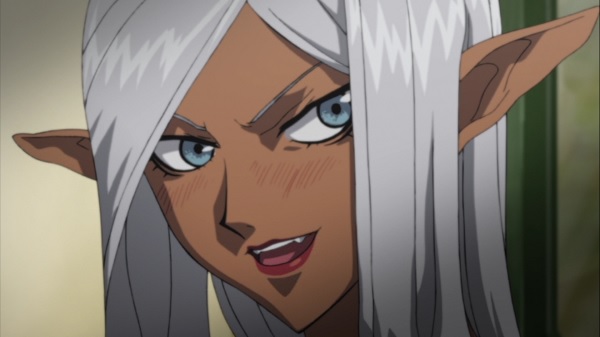 As for the commentary track, the commentary is for Episode 1 which happens to be the longest episode in the series as it clocks in at fifty minutes long. The company has taken a new twist to their commentary for this one by featuring Joel McDonald, the director, as the host who talks with a number of rotating guests who worked not only on the dub but also on the behind-the-scenes tasks that help bring the series to fans. This is a nice twist but considering the length of the commentary, it did seem to last too long on the technical aspect without any of the standard comedic banter amongst the cast or discussion of the characters.

Overall
Tenchi Muyo! War on Geminar Part 1 spends too much time getting out of the gate when it comes to the actual storyline, but all of that time is spent wisely on making a cast of characters that are well-rounded and endearing to the viewer. It also helps that harem antics abound and there is plenty of fan service to go around for fans of the franchise and all of it is beautifully animated and voiced by a large cast that has done a great job bringing these characters to English shores. Now, with Part 1 building the world and the characters, viewers are left looking to Part 2 which will see the story kick into high-gear.