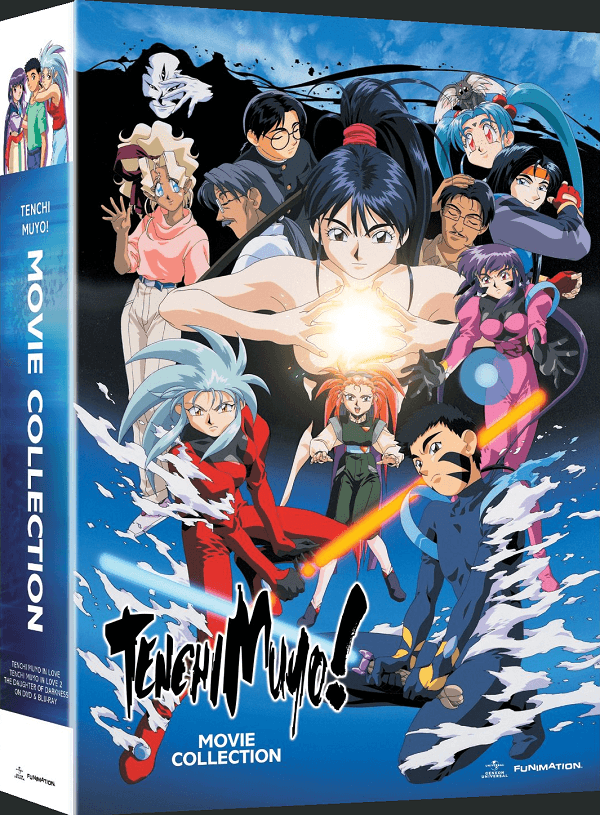 Overview:
While the Tenchi Muyo! franchise may have paved the way for many tropes used in anime today, it is also one of the most confusing series of all time thanks to the fact that the OVAs originally created back in 1992 and aired until 1995 spawned not one but two alternate universe storylines which are not related to the plot of the original OVAs, though used the same characters.

Now not only did these other series, Tenchi Universe and Tenchi in Tokyo make things a bit more confusing for fans, the original OVAs would continue eight years later in 2005 to wrap up the story. However during that eight year span of time not one, but three movies were created. Now FUNimation has taken these three movies, Tenchi in Love, The Daughter of Darkness and Tenchi in Love 2, and brought them to Blu-ray for the first time ever. Are these movies worth checking out now that they’ve finally arrived on Blu-ray?

Story:
As mentioned before, the Tenchi Muyo! series is something of a mess as far as continuity goes between series. Therefore it is worth noting that the movies contained in this package do require the knowledge of not only the Tenchi Universe series but some knowledge of the original Tenchi Muyo! OVA packages would help the viewer understand some of the happenings throughout these three films. 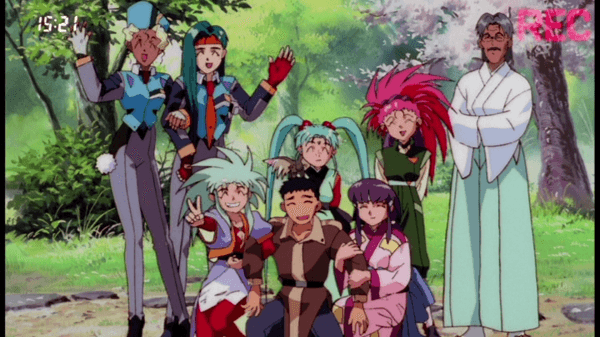 Now Tenchi Muyo in Love seems to take place after the ending of the Tenchi Universe series some point after all of the girls have made their way back to earth and Tenchi is living a peaceful life with these girls, or at least as peaceful as life can be living in a houseful of alien women.  However when a viscous alien known as Kain breaks free from his space-prison he begins to wreak havoc and sets out to destroy the Jurai family. However he does so by somehow destroying the Masaki blood-line which causes Tenchi to begin to fade away in-front of the girls’ eyes. 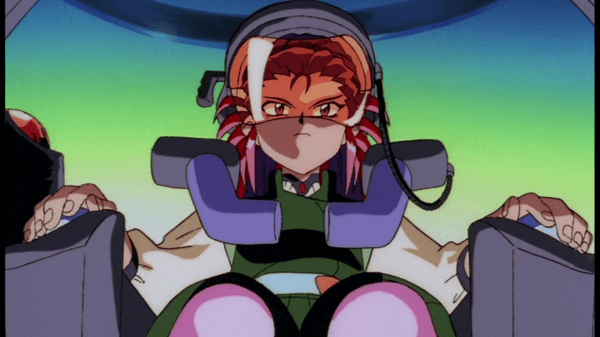 Thanks to some quick thinking from the genius Washu, Tenchi is saved from fading away completely thanks to one of her inventions. When it is discovered that Tenchi’s mother has disappeared from the picture frames around the house, the group realizes that they must travel back in time to 1970 to try and put a stop to whatever caused Tenchi’s mother to disappear, inevitably pitting them against Kain’s nefarious plans.

Despite the fact that the movie seems to take many things away from the original Back to the Future movie, the story actually works quite well thanks to the fact that the group has to try to blend into the 1970 school system to learn more about the situation, often resulting in many hilarious situations. Another plus is the fact that despite the movie can be rather predictable at times, the main characters make the movie enjoyable throughout these predictable plot points as many viewers will be happy to see the cast in a new situation. 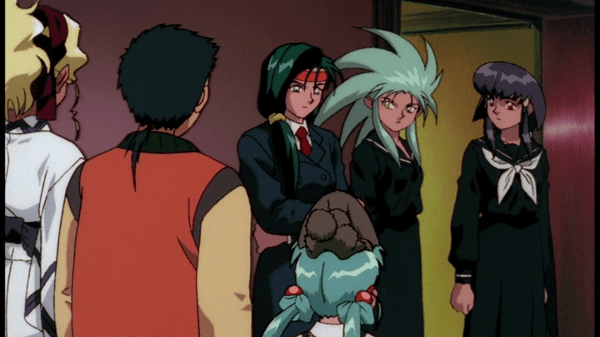 As for the second movie, Tenchi Muyo in Love 2, something strange happens to Tenchi and when he suddenly vanishes from the Masaki household, the girls are thrown into despair. This movie takes a drastic step away from the normal comedic antics that Tenchi Muyo! fans hold dear and instead trades it off for heartbreak, sadness and emotional drama.

As Tenchi is trapped within an alternative universe where he is living with the woman he loves,  Haruna, Ryoko and Ayeka search desperately for the man they love and when they manage to encounter him, they are broken up to see that not only does Tenchi not even remember them, but even his appearance has changed slightly. As such the two must try to overcome their emotional trauma potentially losing Tenchi forever to try and save him from this alternate world. 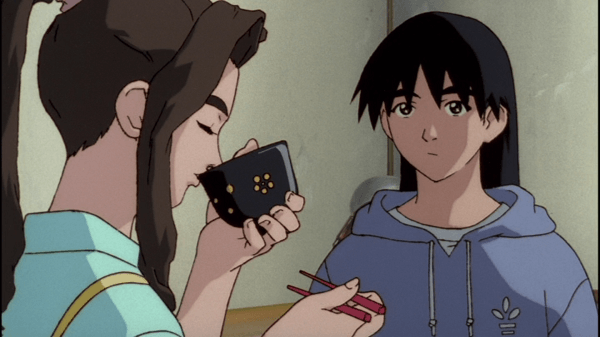 This movie, despite being a severe departure from the rest of the Tenchi franchise, is probably the most memorable of the entire collection thanks to the fact that while there has always been emotion at play through the series, nothing has ever felt as real as the emotions felt by Ryoko and Ayeka throughout the movie.  Meaning that whilst many may find this shocking move away from comedy something unenjoyable in your standard harem show, the emphasis on emotion and heartbreak makes this middle move unmissable for anyone who has become engrossed in the Tenchi franchise.

Finally there is Tenci Muyo! The Daughter of Darkness and in this collection it almost seems out of place despite being a movie. This is mostly thanks to the fact that the way that the movie is structured almost feels like an extended OVA episode more than anything else. Seemingly placed within the Tenchi Universe canon thanks to the inclusion of Kiyone, the show seems better fit within the OVA series than anything else. 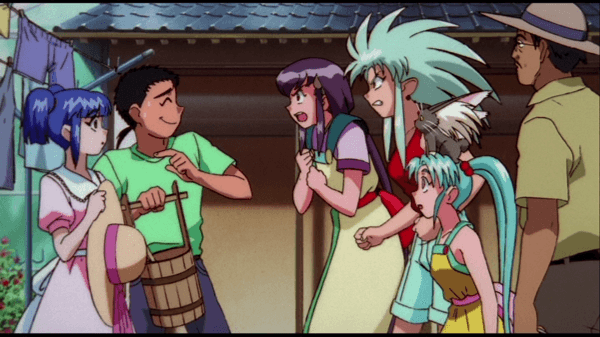 But moving on, Tenchi manages to discover a blue haired girl named Mayuka while visiting his family’s shrine and for some reason, Mayuka calls Tenchi her “Daddy.” This obviously throws not only Tenchi, but of the girls around him for a loop considering the fact that he has never fathered a daughter, let alone one as old as Mayuka already is. As such we see the cast struggle with the fact that this girl may somehow be his daughter, however there are more worrisome issues at play behind the scenes as a strange creature seeks revenge on those who wronged her. 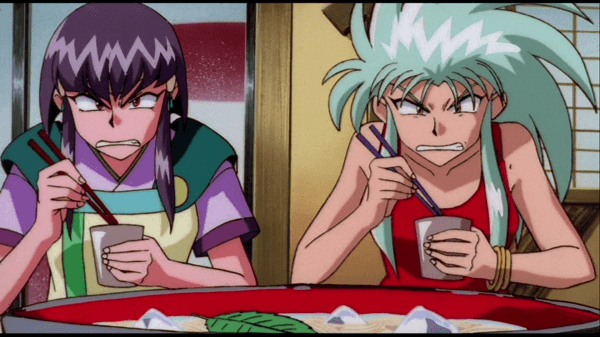 The Daughter of Darkness movie returns the Tenchi franchise to the standard slapstick comedy and humorous visual gags that it is known for and thanks to the fact that it is only an hour long, it provides a nice refresher after the drama of Tenchi in Love 2. That being said, while the story is rather interesting the short run time does not do it justice by allowing the whole revenge scenario nor the drama between the girls escalate to truly interesting levels, instead we are left with what seems like a rather rushed ending. Still, thanks to the OVA feel of the movie, many fans will simply enjoy it for what it is, a slice of the already jumbled Tenchi universe that takes their favorite characters and puts them in yet another unique situation.

Visuals:
With this being the first time that the Tenchi Muyo! movies have ever made it to Blu-ray, it is rather unfortunate that while the movies may look slightly better than they ever have before, these improvements are rather minimal at best with the first two movies only seeing minor improvements while Tenchi Muyo in Love 2 actually benefits the most from the upgrade, though that is likely thanks to the newer art style used in this movie which really brings the third show in the collection to a higher tier, however there is still a lot of blurry unfocused sections thanks to the movies’ age. 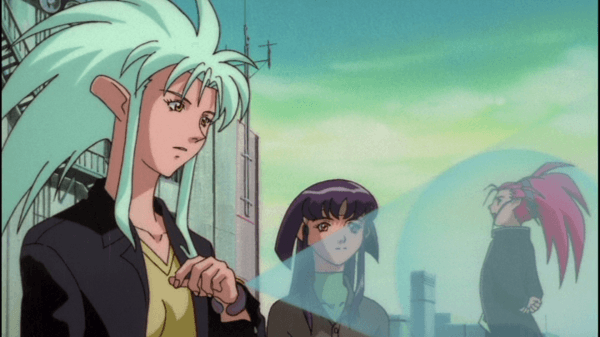 As a whole however, these movies are still rather impressive for their age and given the fact that these were originally created as movies, the overall artwork and the character drawing has seen a significant upgrade in detail and quality over what was previously found in the series. Not only do the characters look better than they have before, the action sequences and backgrounds are similarly impressive as well.

Audio:
It should come as no surprise for fans of FUNimation’s releases that the Tenchi Muyo! Movie Collection comes with both the original Japanese voice work as well as the classic English dub recorded many years ago. Throughout these movies the same voice actresses and actors retain their characters, though it can be said that thanks to the different emotional trials the cast experiences in Tenchi Muyo in Love 1 & 2, the English cast does a great job matching this range of emotions. 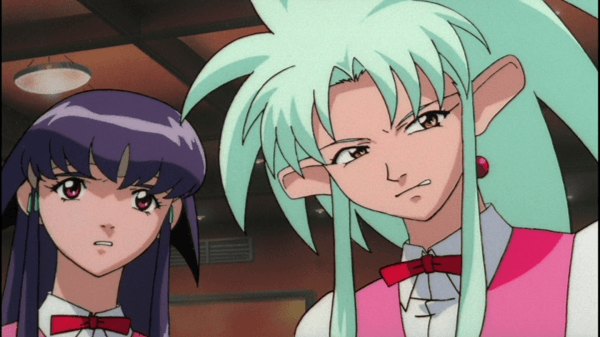 As far as background music goes, many familiar themes play throughout these movies however there are a number of new trakcs as well, many of which are quite enjoyable, though it is worth noting that, surprisingly enough, the movie not related to the other two, Daughter of Darkness, actually contains the best use of background music and sound effects compared to the two Tenchi Muyo in Love movies.

Extras:
Unfortunately as far as bonus features go, the Tenchi Muyo!: Movie Collection is almost completely barren as far as bonus features go. There are trailers for other FUNimation shows as well as a promotional trailer for the Tenchi Muyo in Love 2 movie. Also the release comes with a limited edition art booklet, though our review screeners did not include this art book for analysis.

Overall:
Ultimately the Tenchi Muyo!: Movie Collection contains the best possible way to view these three Tenchi Muyo! movies despite the fact that their jump to Blu-ray could have seen a better visual upgrade. That being said, with three interesting movies, two of which taking Tenchi fans’ favorite cast of characters and putting them in new situations resulting in new comedic and dramatic outcomes and one finally bringing real emotion to the series, these movies shouldn’t be passed up by any fan of the Tenchi Muyo! series.