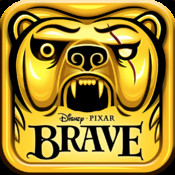 Temple Run was one of the most popular games on mobile devices last year, and rightly so. Indie developer Imangi managed to take the simple, addictive and fun ‘endless runner’ type of game and make it a freemium title that wasn’t a rip off (which is very rare to see these days mind you). On top of that Temple Run also included a well thought-out upgrade system that would make anybody playing this casual game work hard for achievements and goals just as hard as any hardcore gamer would. In short, Temple Run is one of the best casual games available on mobile devices. Now Disney has teamed up with Imangi to create Temple Run: Brave, a title that takes the original Temple Run and dresses it up in the theme of the upcoming Disney movie Brave, as well as adding in an extra feature or two here and there. However Temple Run: Brave is now priced as $0.99 so unlike the original it’s not free. So a question springs to mind: is it worth your money? Read on to find out! 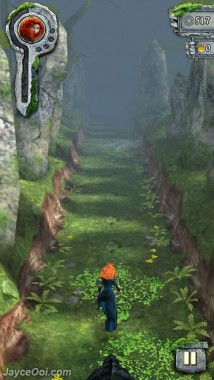 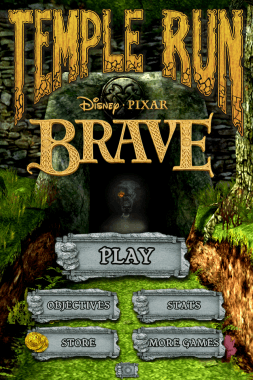 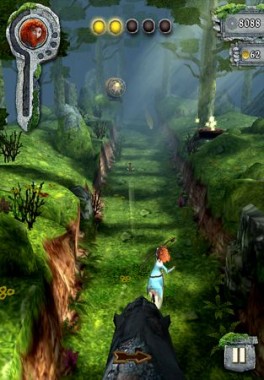 If your familiar with Temple Run, expect to feel right at home. Everything you love is back with a brand new polish. Although I must admit I am pretty confused as to why it’s called Brave when you spend the entire game running away from the film’s evil demon bear villain, Mordu. What’s so brave about that?! Like all endless running titles, you character Merida runs automatically by herself, and you tilt your device left and right to collect coins. By swiping left and right you can turn and by swiping up and down you can jump and slide around obstacles. By collecting coins you can purchase upgrades. Unlike most games that upgrade your character, here you upgrade the levels themselves by introducing new powerups that make the game more fun the more you play. Grinding and collecting achievements has never been more entertaining! But you’ve played Temple Run before you would already know this, because none of this is new. This is the exact same game just with different graphics. Although there is one exception with an added new feature – archery. By clicking left and right in particular sections of the game, you can shoot bullseye targets for extra coins. This is slightly refreshing as it does mix up the gameplay a little, but hardly new. The game while it is really fun, just feels annoyingly too familiar. 90% of the time your chasing the same achievements you probably have already reached in the original Temple Run. It’s basically deleting the saved progress of your last game and starting again, only with different presentation and one new feature which is barely noticeable. Sure it’s a slight improvement, but in the end it’s just another case of video game déjà vu. 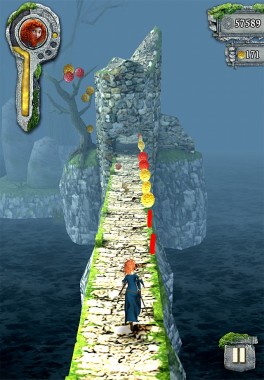 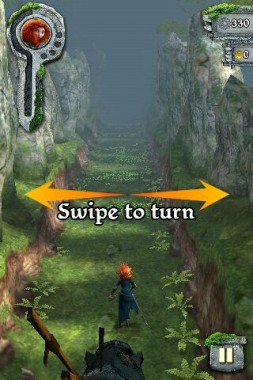 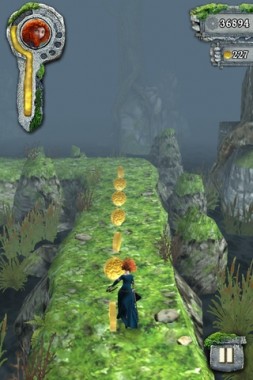 Visually Temple Run: Brave is a massive step ahead of it’s predecessor. The scenery has much more detail in textures and presentation feels a lot more polished. While for the most part this title is just the same game with new Disney-themed visuals, it’s a lot nicer to look at. However while presentation and scenery is a lot nicer, character models do look a bit out of place at times and unfortunately aren’t up to the same standard, but it’s not by much so it’s tolerable. Music is also an improvement and much more exciting than what we’ve heard in the previous Temple Run. A new addition included is voice acting, but unfortunately it sounds very awkward. To make matters worse what these awkward voices say are just as bad. Lines such as “So much jumping!” and “My legs are getting tired!” are probably the last things you wat to hear while playing an endless runner title. That being said all these flaws are easily overlooked and aren’t really that bad. 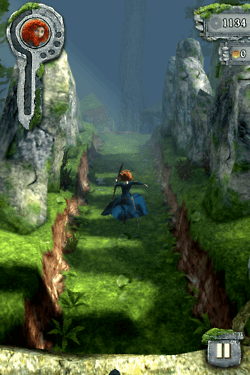 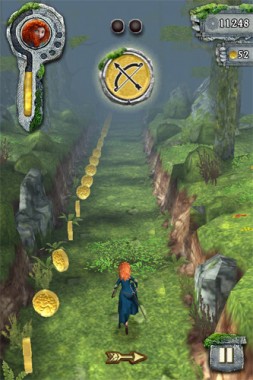 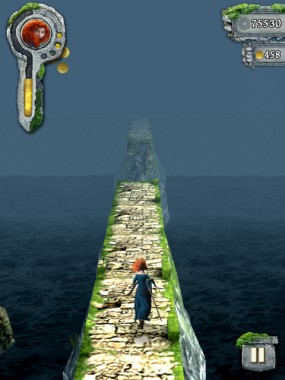 If it’s your first time around playing a Temple Run game, your going to have a blast with one of the best casual titles on mobile phones today. Disney/Imangi have gone with a ‘if it aint broke, don’t fix it too much’ approach here. Temple Run: Brave is basically Temple Run with better audio and graphics with one added extra feature. It’s certainly worth picking up, however if your a hardcore Temple Run player like me you may find it frustrating having to get back so many achievements and spending $0.99 on a game you already downloaded for free. Simply put, Temple Run: Brave is a great casual title, a bad squeal/spin-off and pretty damn good for a licensed game all at the same time.