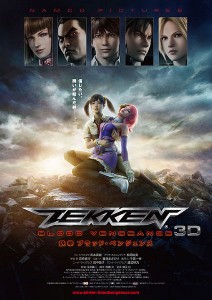 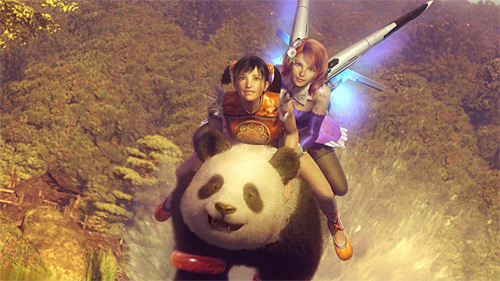 The Tekken franchise has been going strong since 1994 and has seen it’s ups and downs, but things couldn’t be better for franchise as of now. Tekken Hybrid is due to come out later this year, featuring a HD remake of the popular Tekken Tag, a demo for Tekken Tag 2, and also the CGI film Tekken: Blood Vengeance 3D. Blood Vengeance 3D is a remarkable film, featuring many of the people behind the games involved to achieve sucess. Fans will be pleased to hear that Namco and Digital Frontier have done their best to bring justice to the franchise and have avoiding creating yet another crappy cash-in video game movie. It’s been about 20 years since we first met the franchise, and Blood Vengeance 3D works as a good reminder as to why it is so successful. 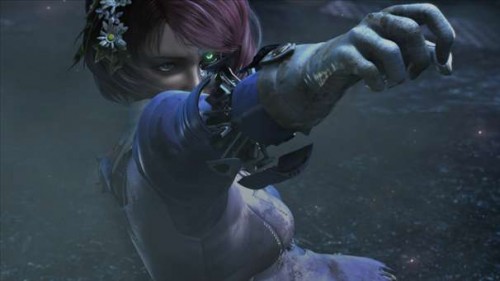 The plot follows Ling Xiaoyu, as she is forced by Anna Williams and the G Corporation to transfer schools and spy on a mysterious student named Shin Kamiya in Kyoto. When Shin is kidnapped, Ling teams up with Alisa Bosconovitch as they attempt to rescue Shin, and uncover the dark secrets behind the the Mishima Zaibatsu along the way. Unlike many fighting-based video game films these days, Tekken: Blood Vengeance 3D doesn’t try to squeeze too many characters into the film (Im looking at you Mortal Kombat: Annihilation!) which gives each character more screen time and character development. In fact, many characters just make particular cameos or just act as characters in the film who don’t even fight, so it never feels that they were just thrown in for the sake of it. Characters like Panda, Ganryu, Mokujin and Lee Chaolan play important roles in the film and don’t even engage in combat. The new character Shin Kamiya may annoy some fans because he steals the spotlight from other popular fighters such as Eddy Gordo, Paul Phoenix, Yoshimitsu or King who don’t appear in the movie at all, but he is entertaining enough that Im sure even the most hardcore Tekken-lover will show forgiveness, and eventually ask when Shin will be available to play as in a Tekken title. Fan favourites Heihachi Mishima, Jin Kazama and Kazuya Mishima don’t really make a strong appearance until the climax of the film, where the action mainly shifts to them from Ling and Alisa, but the entire movie is building up to the battle so it doesn’t feel too forced (Im looking at you Venom in Spider-Man 3!) and is still entertaining to watch. 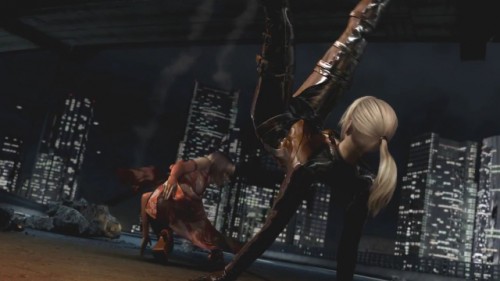 Besides a very cheesy ending (no spoilers, but think Pokemon: The First Movie!) the plot of Tekken Bloodline is actually pretty good judging by the standards of a video game adaptation. It has a few flaws, such as ignoring characters after they die and are never mentioned again and some very cliché anime-styled dialogue, but the film still manages to entertain. I was actually surprised at the amount of fighting that wasn’t in the film. All up I think theres only about 5 fight scenes in the hour-and-a-half feature, and the rest is driven by some surprisingly engaging mystery-solving adventures and best of all, humour. Just like the video games, Tekken: Blood Vengeance maintains a photo-realistic look while still keeping that surreal, anime-styled appearance through, and is directed as such as well in both dialogue, directing and humour. Anime fans are sure to get a kick out of this one! The only problem is sometimes it’s kind of funny when it is not supposed to be, especially to the dirty minded. Some examples includes a particular scene where Alisa tells Ling “I have a crush on Shin Kamiya, that’s why I sneak into his room every night!”, as well as a scene where the shirtless Shin says “I know you’ve been searching for this body Jin. You want to stick me under a microscope, you can’t resist me.” Of coarse, situations like this are only unintentionally funny when taken out of context, and it could easily be argued this is just the plot being lost in translation, but it’s still an issue where a shower has a TV screen that for some reason is showing footage of a security camera outside the room, and the use of ‘Riddler logic’ from 1960’s Batman where no joke, while searching a room for clues Ling Xiaoyu takes the code 78M and decides straight away to check the 7th bookshelf, take 8 steps away from it and grab the Medical Records and find a photo and deduct a clue from that. There’s also a few consistency issues as the film takes place between Tekken 5 and 6, yet I don’t recall Lee and Ganryu being school teachers in the game, or Heihachi Mishima being a school Principal. However, if your a Tekken fan, which is the target market of the film, you’d already know never to take Tekken seriously. The game has you fighting Kangaroos for crying out loud, no, if your a Tekken fan you appreciate the story but really only come for the fighting and graphics, which are delivered wonderfully. 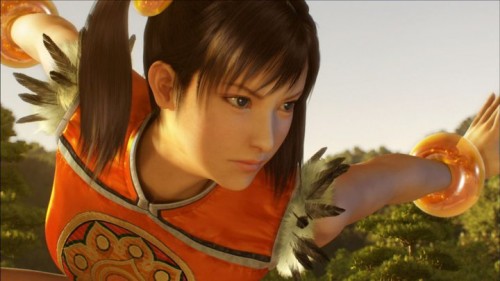 Tekken: Blood Vengeance is easily one of the best films I have ever seen in terms of taking advantage of 3D technology. You can quote me on that! It does this in two opposite, yet equally effective ways. Firstly, it makes subtle textures in backgrounds and character models stand out, so instead of looking like a pop-up book, it enhances it’s graphics, forcing you to appreciate the attention to detail. Secondly, unlike most hollywood 3D films these days who use 3D as a cheap gimmick (Im looking at you Clash of the Titans and you too My Bloody Valentine 3D!), the fourth-wall is never broken with characters randomly popping out of the screen, but rather only vaguely popping out when the director wants a particular feature highlighted. For example, during combat fists and feet that are dodged may slightly pop out of the screen, and the action will slow down so you can take a few seconds to let it sink in. Every frame seems engineered and specifically shot with 3D in mind, not just lazily coded in. So therefore the 3D goes hand-in-hand with the graphics and direction, which look fantastic. One of the Tekken franchise’s most popular features has always been its action-packed FMV videos, and if anything seems familiar, it’s probably because it’s directed by Youichi Mouri, who also directed the opening movies to Tekken 5 and 6. The graphics look great, and because it’s all CGI everybody looks like they do in the original source material, so it’s impossible to disappoint the fans there! It should be noted the character models look at their best in extreme close-up shots. The fight scenes are amazingly choreographed and the impossible camera angles achieved only through CGI spit in the face of Kung Fu Panda and may even overtake Final Fantasy: Advent Children, if not its a close tie! There are some really awesome scenes in this flick and it’s filled with eye candy, really the only way to describe what you see is one word: cool! 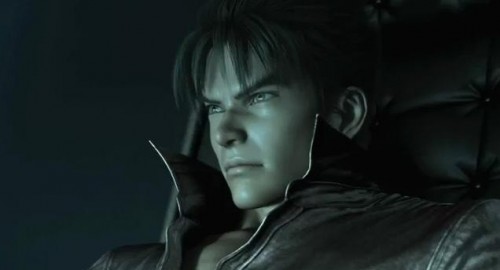 With the Score behind Tekken: Blood Vengeance being composed by Hitoshi Sakimoto, the guy behind the music of Tekken 6, the sounds are very authentic to the source material. This is further supported by the fact that Namco has “tried as much as possible” to use the same voice actors from the games, and it shows. While some voices I feel still don’t suit all the characters, although they do most, it does create a level of satisfaction that the characters are represented accurately. There are some lip syncing issues however which I did find annoying, but considering it’s a dub you can’t really blame anyone. The dialogue is also pretty stiff in some parts, and is often very cheesy, but if you watch a lot of anime, your probably used to that kind of thing. The score is very fast-paced and action packed and works wonderfully and compliments the style of directing which is a major bonus though. 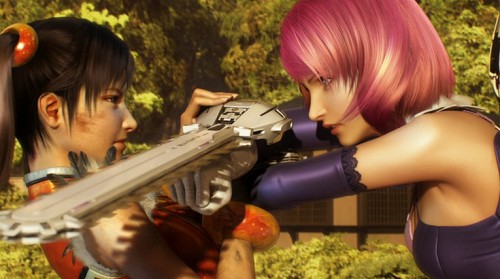 Tekken: Blood Vengeance 3D is by far the greatest motion picture adaptation of Tekken to date. It K.Os the anime film and the live-action film doesn’t even compete for the first round. The 3D effects are some of the best implemented in motion pictures to date, and I’d personally put it up there with James Cameron’s Avatar. The graphics, art style, music and voice acting are as true as possible as they can to the games and should satisfy fans. For those who aren’t fans of the franchise, you’ve got epic 3D effects and superbly choreographed fight scenes to entertain. The plot is decent, but it’s executed with stiff, cheesy but tolerable dialogue and an ending that does wrap things up nicely, but still isn’t as full-filling as it could’ve been. Regardless, Tekken: Blood Vengeance isn’t perfect, but it’s still very good and definitely worth checking out. Tekken: Blood Vengeance will satisfy fans and engage anime and CGI lovers, and film makers can take two valuable lessons away with them from this film: 1-this is how 3D effects should be used in a motion picture, and 2-this is how to make a video game adaptation that doesn’t suck. 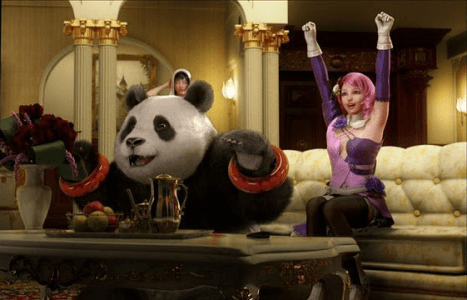 I give Tekken: Blood Vengeance 3D: