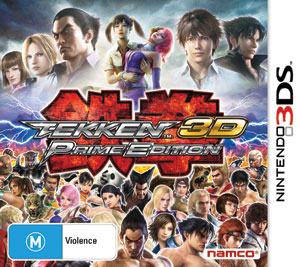 Tekken 3D Prime Edition brings the King of the Iron Fist tournament to a Nintendo console for the second time, this time in full 3D. Primarily being a game for the home console, it’s interesting choice to bring Tekken back to a Nintendo handheld – even Yoshinori Ono (producer of Street Fighter) thought it was an odd choice (at least in the advertisement for the game). With a nearly 10 year franchise behind it, just how much punch does this portable fighter really have? 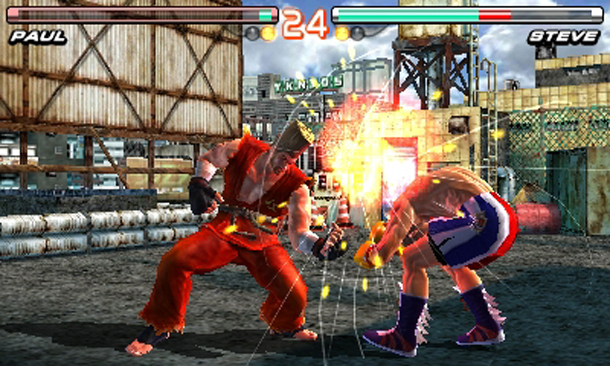 Tekken fans will know the basic story surrounding the King of the Iron Fist tournament and know the back-story to characters along with their inherent rivalries. Those new to series may be a bit confused by the story, in that there is no integrated story line. The booklet contains no back-story to the cast of 41 characters, and the only means of connecting to any back-story is the film, Tekken: Blood Vengeance, which also comes on the cartridge.

The story of Blood Vengeance takes place between Tekken 5 and Tekken 6, and doesn’t really fit into the timeline or gameplay of 3D Prime. Instead, the film just acts as somewhat of a novelty – allowing players, or rather 3DS owners, to watch a decent 3D movie on their device. For a detailed review of the movie plot, you can always read our review of the cinematic release of Blood Vengeance here. Given that Tekken does have a rich back-story, it would have been nice if it was better integrated in to 3D Prime – easing in new comers to the series and bringing something new to fans. 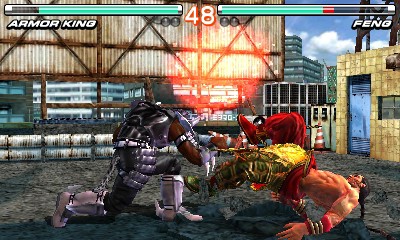 Tekken fans may notice slight absence from the gameplay modes available to 3D Prime players – that being the lack of a tournament mode. This reflects the story of the game, which as I noted is oddly absent from the cartridge. There are a few main single player modes of play for Tekken, practice, quick battle and special survival. Special survival allows players to fight against a number of characters using one health bar – first 5 enemies, then 10, then 20 and so on. The more characters there are the progressively harder each individual becomes. Milestones are made throughout the survival campaign in the form of special matches, where the enemy will need to be hit a few times to cause any damage. Winning these is rewarded with Tekken Cards, which I will come back to later. Quick battle features two rounds against different levels of opponents, ranging from 1st-9th Kyu and then Dan. The more difficult they become, the more unlikely you are to play as it decreases your winnings and gives to a poor win to loss ratio – which can be seen by players you encounter online.

In terms of functionality, Tekken 3D Prime works wonderfully. I’m not sure if I am totally taken by the addition of combo buttons on the touch screen but I do enjoy the “shift” button function of the right and left shoulders. Not to mention the highly customizable button mapping, which allows placement of favourite combos on the touch screen. There are a wide range of combos to master in order to obtain victory, and the ability to move completely with the in three dimensional space, side stepping in a circle, really makes use of the 3D capabilities of the device. Don’t let the lack of single player game modes phase you too much, if you strip Tekken 3D Prime down to it’s core fighting mechanics, it’s a fantastic game. 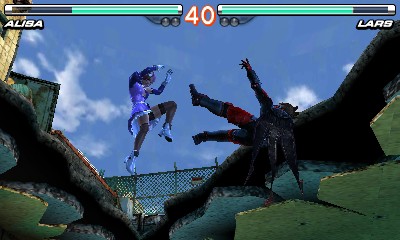 Single player fighting games can only go so far. Versing the same AI over and over, upping the difficulty just to test yourself can become as tiresome as actually fighting 40 people back to back with only one health bar. Sadly, Tekken 3D Prime, while it may have a wide selection of characters, doesn’t allow you to use them online as much as a fighting game should. The online multi-player has the most painful lag I’ve ever experienced – making it slightly unfair for new comers who may just sit back in awe as their character gets pummeled in slow motion – without ever having a chance to defend themselves or fight back.

The street pass function is based on sharing 700 cards. It’s possible to equip three to your profile for sharing when out and about, but sadly I have not met anyone else with a 3DS in a long time. This also makes local multi-player games a little difficult too – I can only hope it has a lot less lag then its online counter-part. While some of the drawings are pretty cool, there isn’t all too much to do with this street pass function and I have a feeling you can unlock all 700 cards on your own by playing survival mode. 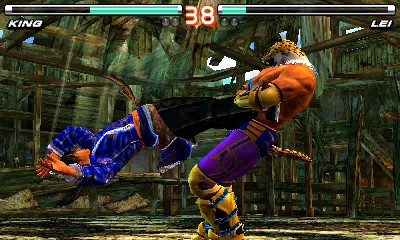 Visually, 3D Prime is a work of beauty. If the movie acted as a pure novelty, think again. Having used part of the game cartridge to house a movie meant having to increase the game to 60 FPS, which runs beautifully in 3D. Having three dimensions adds real depth to the title, and matches the ability to move through the whole space. The environment is fully interactive, player’s can slam their opponent to the ground, breaking it or even falling down in to a second level. The background music always fits perfectly with the environment, with a few randomly placed humour soundtracks thrown in – for example the fields with yodeling music. The voice acting is fantastic and supports the character design well, which should be noted has not been changed significantly from previous Tekken titles. This is a level of detail I am usually used to in full-scale adventure games, not handheld fighting games. Bravo Namco, bravo. 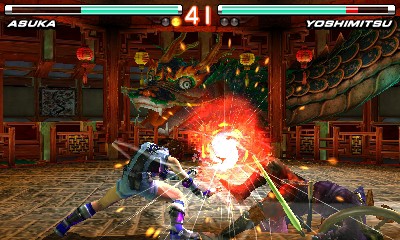 Visually stunning, boasting some of the most remarkable 3D I have seen on the 3DS, with a soundtrack to match, Tekken 3D Prime Edition is indeed a fantastic title for the 3DS. However, for Tekken fans it may be slightly disappointing. The fighting mechanics are fantastic, but the serious lack of single player options coupled with the poor multi-player mode means this title is in serious danger of infrequent play. 3D Prime will be great fun while it lasts; my only concern is just how long will it last?