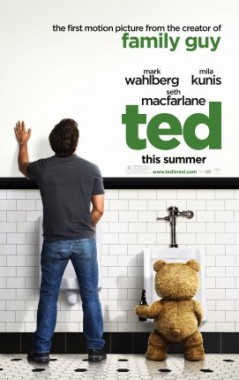 Coming from Seth Macfarlane it comes as no surprise that Ted runs in the same vein of humour as Family Guy. However, it is more accessible, less full of American specific humour (such as references to particular athletes or politicians that the general international public may not be aware of, and a whole bunch more heart warming.

Ted starts off as a satirical take on that classic kids miracle type of movie where a wish causes a toy to come to life. It’s something that certainly deserves satire, given the popularity of such films. Opening with a voice over from Sir Patrick Stewart, the movie sets itself up really well and the reason it comes off as a good satire is it so closely mirrors the original material. Seth Macfarlane seems to be holding back a lot of his more out there Family Guy humour in favour of subtler, punchier jokes. 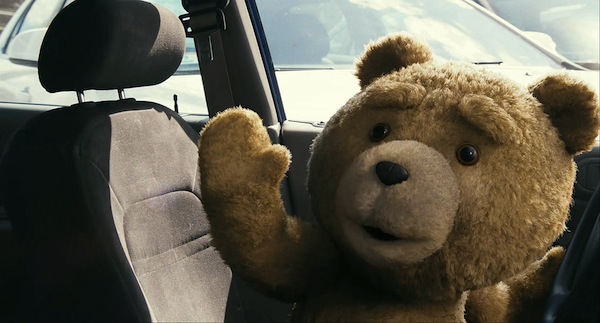 The biggest joke probably comes from the fact that it answers the question of if your teddy bear turns into a magical talking teddy bear, what happens when you grow up? Well the answer is, it grows up with you. Twenty seven years later and the bear who starts off adorable and child-like has turned into what you’d expect from a twenty-seven year old teddy bear, he’s a foul-mouthed, sex-obsessed stoner.

Ted is obviously Seth Macfarlane’s voice in the film, not only literally but it’s obvious that Ted embodies Macfarlane’s observational and sarcastic humour to a tee except with a little less social commentary. He’s dry, quick witted, and a good deal of his lines are tongue in cheek. All of the other characters adopt a similar form of humour, but they have their own spin on it that sets them apart.

The chemistry between the three main characters is great and any scenes with two or all three in it are gold. Mila Kunis and Mark Wahlberg have a good back and forth, not only through the dialogue but they genuinely seem to have matching forms of humour. Not to mention the fact that Wahlberg’s scenes with Ted are great, he manages to have a strong best friend chemistry with what is effectively a CGI bear and Macfarlane’s voice. 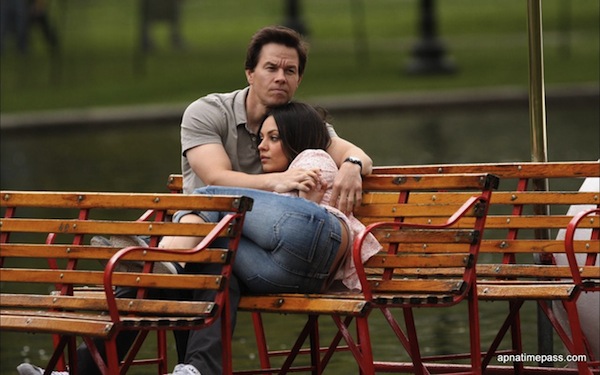 There are some truly great scenes that are brutally honest and realistic in a way that Family Guy fans may not recognise. The dynamic of John and Lori’s relationship is one of the more honest portrayals of a relationship that I’ve seen in a film, honest not only in the way that it doesn’t sink into melodrama, but in that relationships can still be fun after an extended period of time. Most films will have a couple that have been together for a long period of time tired of each other or bored in their relationship. It’s nice to see a different, less depressing portrayal.

The film almost feels like the first part had Macfarlane planning a certain kind of movie and having it evolve into something more real and emotive than he originally intended. That’s not to say it’s a bad thing, it just feels like at a certain point the movie shifts into a different thing than you were expecting. 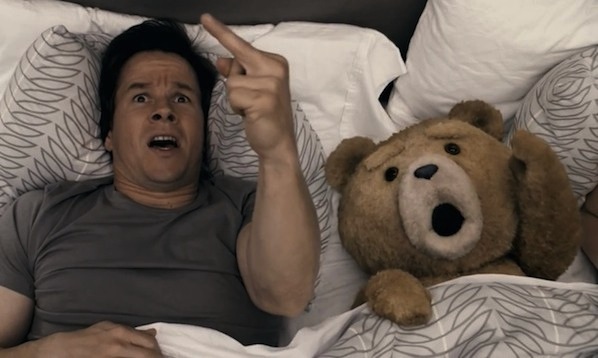 The film is extremely self aware, which adds to the humour of it. And while it contains less social commentary humour than Family Guy, it still has a whole bunch of pop references, although they are more internationally accessible. At one point Ryan Reynolds makes a cameo appearance and is referred to as ‘that Van Wilder looking guy’. This self awareness isn’t new for Macfarlane, but it’s good to see it brought into the movie as well.

The animation of Ted is fantastic, it really works well and the actors deal beautifully with acting with an animation, especially given how much of a role he plays and the range of emotions they go through. Ted moves realistically and fluidly and his waddle is absolutely adorable and looks great. 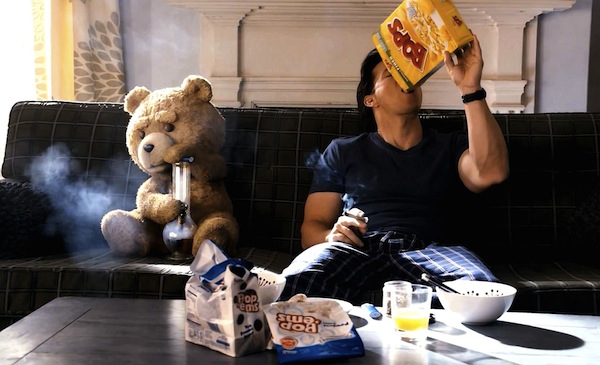 There is a fight scene in one part of the movie that is choreographed and acted better than most action films are when both participants are people. It’s got a bit of a Peter Griffin/Chicken fight feel, but in real life which is so much more awesome. Again, there’s a sense of reality missing from most films, which is ironic given one of the characters is animated.

The film does sometimes slip into the stereotypical over the top soundtrack during some of the more depressing or action oriented scenes, and sometimes that becomes obvious, but overall it is enjoyable. 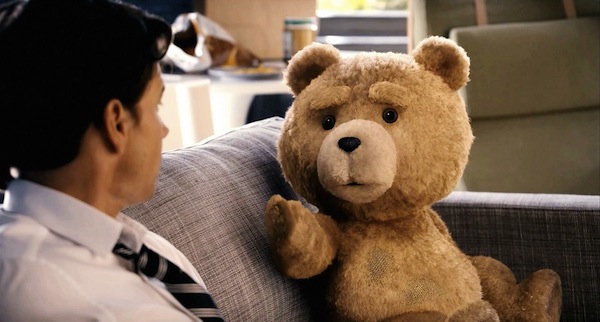 Ted’s voice sounds like a combination of Peter and Brian Griffin from Family Guy, which is actually addressed in the film when John teases Ted. As mentioned previously, it’s a very self aware film and that’s part of its charm.

Ted is a comedy designed for adults who have grown up watching those kids films about miraculously speaking toys. It manages to be insulting, hilarious, and charming all at the same time in a way that Family Guy and American Dad sometimes fall short. This is definitely worth checking out, especially if you’re looking for a comedy that is outside the box and aims for that nostalgic bone we all have.