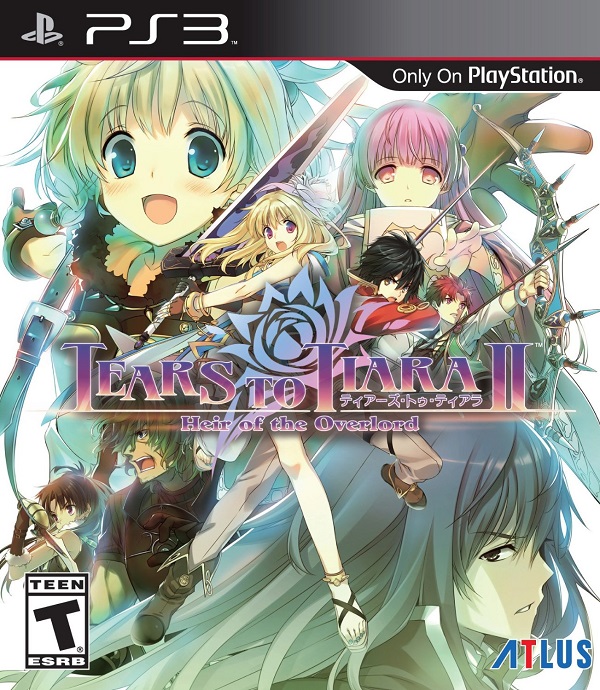 Overview
Before Tears to Tiara II: Heir of the Overlord was announced for Western release, the Tears to Tiara name was likely known to only a few niche circles. Originally an SRPG eroge on the PC in 2002, Tears to Tiara was never officially released in English, even when an all-ages version was released years later for the PS3.

In fact, outside of an anime adaptation for the first game and guest appearances in Aquapazza, both of which have been released in the West, many people will be uncertain about picking up Tears to Tiara II. You can rest easy however, as not only does this game tell a separate story, the story it has to tell is a massive one.

Story
Seven years prior to the start of Tears to Tiara II, the Divine Empire invaded the land of Hispania after its ruler, Hasdrubal Barca, attempted to revolt against the Empire and was crushed. Due to his actions, the people of Hispania have spent the last seven years under the iron fist of the Empire, dealing with brutal taxation, rampant corruption, slavery, and worse. 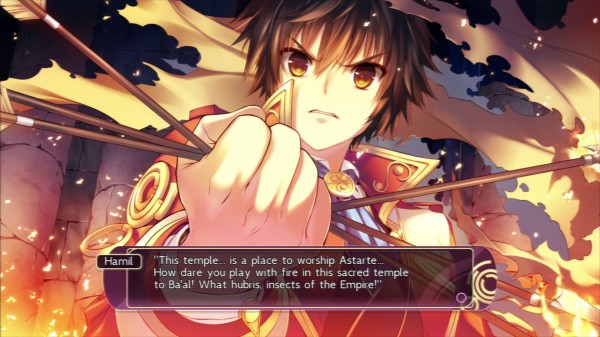 The last member of the Barca bloodline, Hamilcar Barca, survived the death of his father but appears to everyone as an incompetent boy who follows the orders of the Empire without question. Weak, cowardly, unreliable, Hamil does everything he can to try and keep his people safe from the Empire’s harsh punishments. That all changes when a woman named Tarte enters his life and sees through his façade.

As he spends time with Tarte, the Empire continues with their plans to bring Hispania to its knees, revealing in horrible fashion that they are going to destroy everything the citizens hold dear and force them into complete unwavering servitude or death. Faced with this ultimatum, Hamil sheds his old personality and unleashes seven years’ worth of boiling hatred in a massive show of power that leads the people of Hispania into open rebellion against the Empire. 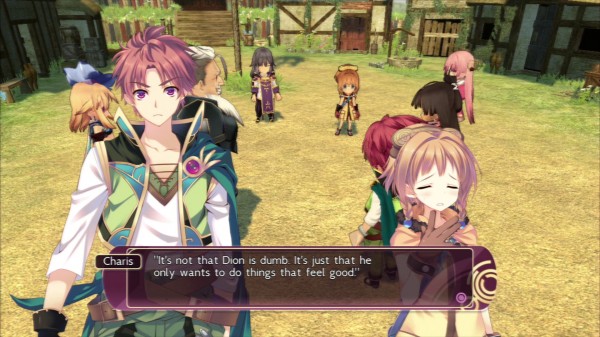 Despite the power of a Goddess on their side, Hamil, his elite unit, and the rest of the forces of Hispania are facing a powerful opponent willing to use any means necessary to rule the land and stamp out this nuisance. Where the majority of JRPGs tend to focus on stories with fluffy themes and minimal drama, Tears to Tiara II is more of a throwback as it features not only numerous serious themes at times but also a focused storyline that makes intelligent use of unpredictable twists and world development to create an enthralling story.

To top that off, thanks to the length of the story and the tighter focus on a core cast of characters, we are able to watch most of the cast grow over the course of the game. While a few standard and predictable stereotypes do surface from time to time, these moments are few and far between as Aquaplus has managed to craft a world where players will become invested in seeing how everything unfolds.

Gameplay
It is a very good thing that the story in Tears to Tiara II is everything that fans of the genre would want, as the title is more visual novel than SRPG. In fact there are times where you will easily go over an hour or two before entering the next battle as you watch the story progress through character interactions. One thing that is problematic about this design however is the fact that the save system was not designed like a standard visual novel where players can save at any time. 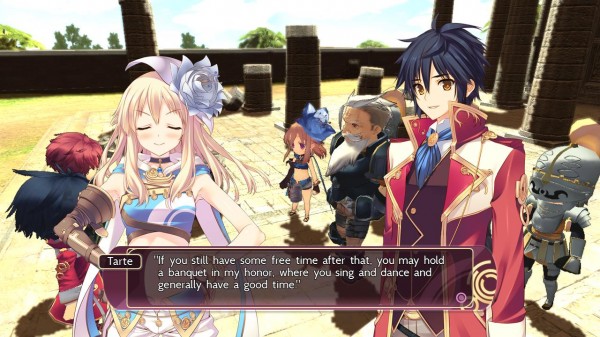 Instead players will need to save at specific intervals throughout the story, which can be problematic at times, especially during some of the excessively lengthy event sequences. That being said, outside of events players will have the opportunity to save the game at any time at their home base or before the beginning of every battle, which is expected but a nice change from the way it is handled in the story.

As for the battle system, Tears to Tiara II is an SRPG that follows some very standard rules that don’t really break the mold outside of a few unique systems. All combat takes place via turn based combat on a grid battlefield. At the beginning of battle you select as many characters as the battle allows to enter into the fight, though wounded fighters can return to the “Quadriga” which is a chariot and in here they will not only be healed but other units can be deployed in their stead. 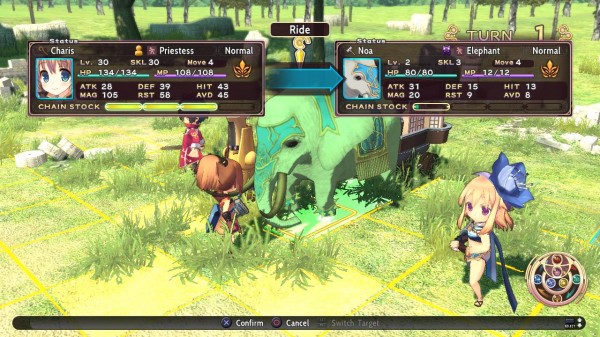 Every action in combat gives players experience points, including opening chests, using items, healing allies, and of course attacking and defeating opponents. This makes Tears to Tiara II a game that is less punishing title that allows players to level weaker characters without risking defeat, but it is still one that requires quite a bit of grinding. As for being defeated, it is entirely possible to lose battles if you do not pay attention to a number of Tears to Tiara II’s somewhat unique mechanics as the AI can be quite punishing on harder difficulties.

Being a grid based game, the direction of player attacks matter as rear attacks will deal more damage and considering every melee attack results in a counter of some sort, proper planning is necessary for dealing with large threats. This is where chain stocks, the elemental cycle, and the ability to threaten enemies comes into play. Chain Stocks increase whenever players take action or receive damage and whenever one bar is filled, players can either increase the power of a magic skill or attack more than once per turn. 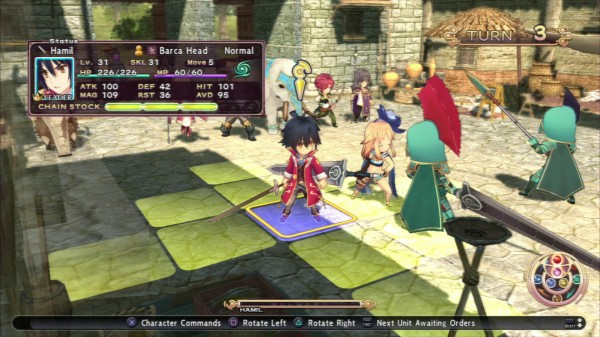 As for the elemental cycle, every character in the game is given an element of some sort and each element is strong and weak against others. Picking fighters with an advantage over their opponents allows for the player do deal extra damage and takes less in turn, but be careful as every turn the element gauge will rotate and give certain elements a boost in strength making proper planning a necessity. The same can be said about threatening opposing units. Because magic users and distance fighters are weak to melee attacks, players can position other fighters in-between enemies and these squishier allies, forcing these enemies to stop and deal with the melee fighter before advancing on.

There is also a “Rewind” system that allows players to return back to previous turns and try to change how things unfolded. It is worth noting that although you can rewind turns, the same actions will result in the same results, meaning a missed attack will continue to be a missed attack unless you change something. This makes the system far less punishing than it could be as players can rewind from the brink of defeat and try a completely different strategy. Add that onto the fact that players can also choose to play on a tame easy difficulty, or swap before battle to easy if they ever come across a battle they are struggling with, and you’ll find that Tears to Tiara II can be relatively easy for those who would rather enjoy the story without struggling, or as hard as you want it to be for those who want a challenge.

Visuals
When it comes to the artwork of Tears to Tiara II: Heir of the Overlord, the game is mixed. The character portraits displayed in dialogue sequences not only feature a nice amount of detail but also a number of different poses to keep things fresh throughout the lengthy events. It also is nice that many of these events are interlaced gorgeous CG event screens to help spice things up and display important moments. 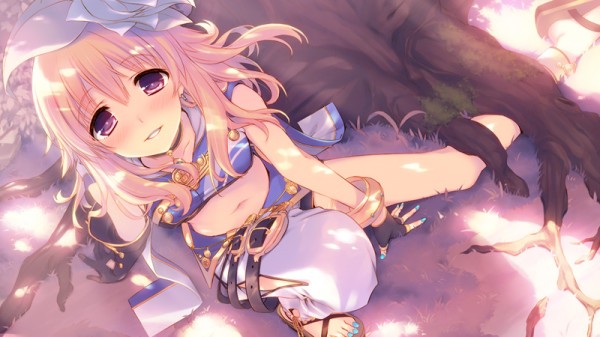 Unfortunately the same cannot be said about the actual character models and environments in the game. This is due to the characters all being designed to have chibi bodies and equipment with lower detail. Add this to the fact that even strong skills are rather lackluster looking and the battlefields are all rather predictable looking and poorly detailed and you’ll find that many battle sequences are sadly disappointing.

Audio
With Tears to Tiara II being such a massive game with a heavy focus on dialogue, it is a bit disappointing that Atlus chose not to give the title an English dub. This decision does make sense though when you consider the untested nature of the property in the West and the sheer size of the game’s voice work. It also helps that those who are familiar with anime will find that the main heroine, Tarte, is voiced by Rie Kugimiya who sports an extremely familiar and likable voice. In fact many of the characters in the game feature voice actors with a long list of anime series in their repertoire, making the Japanese dub quite a treat for anime fans. 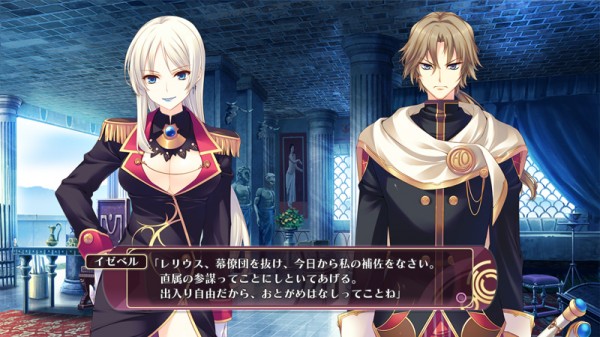 The soundtrack in Tears to Tiara II has an impressive range. There are inspiring orchestral, soft piano music, heavy rock sequences, and more types all designed to properly fit the tone at the time and every single one of these tracks fit the style and theme of the game perfectly without a single one feeling out of place.

Overall
Tears to Tiara II: Heir of the Overlord shines its brightest during the visual novel sequences as players will be treated to a well-rounded and developed cast of characters taking part in a stellar storyline that is expertly told. That being said, the length that some of these dialogue sequences can run without intermission can be daunting at times. This leaves the familiar combat system as something of an afterthought at times, meaning this game may not be for everyone; however those that are looking for an expansive storyline should look no further than Tears to Tiara II.