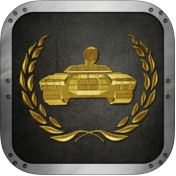 War is a terrible thing but the idea of war makes for an incredibly high-octane gaming experience, it is obvious that game developers know this because games like Call Of Duty and Battlefield would have never been made had war within gaming been just as terrible as war itself. Games within the action/shooter genres have become extremely popular in recent years and so has the implication of MMO-style multiplayer options, you can see why the two blend so well together and it seems as though a company has finally brought all these gaming attributes to Mobile gamers around the world, I’d like to introduce you all to “Tanktastic“, a game that brings everything gamers like to a platform that is quickly become one of the most accessible of them all. 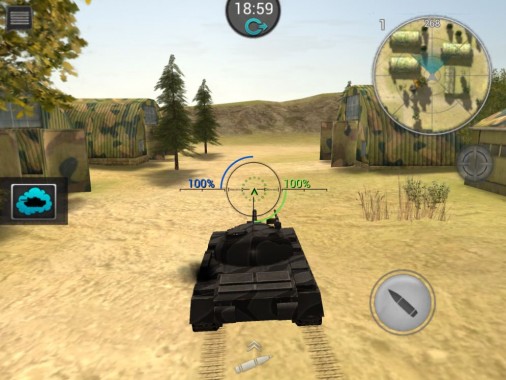 “Tanktastic” is a game that puts you in charge of your very own tank, it is a third-person shooter that also somewhat doubles as a tank simulator because of it’s fairly realistic movements, aiming mechanisms and driving mechanics. You play the game much like you’d play any action/shooter titles; you use your left “thumb stick” to move, your right “thumb stick” to aim and the “fire” button to…well…fire. Look, “Tanktastic” is actually an incredibly easy game to get a grip on though it does have a fairly large learning curve that you can work through at varying degrees, it took me a couple of straight hours of gameplay to fully understand everything but it was actually worth it because now I’m somewhat formidable as a player.

Like I mentioned earlier; it is much like your typical action/shooter but with a huge  twist that seems like it wont work but it really does. Playing as a tank, a slow-moving machine of death, doesn’t actually sound that awesome considering players are so used to being able to dash around a battlefield, jumping over obstacles, sliding to cover, parachuting from helicopters and so on but you’ll find that “Tankstastic” does actually give you quite a high level of excitement, it’s not just all out action, it’s more strategic and it perfectly fit the game. 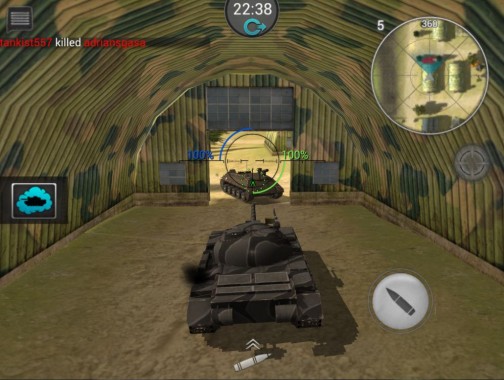 The fantastic thing about “Tanktastic” is that it’s not just a basic game, many other games would give you half of what I explained above and just leave it at that but this title gives you that and much more. Alongside the polished gameplay mechanics comes the additions of a fantastic amount of different tanks for people to use and a plethora of varied upgrades that can be unlocked and purchased to help make your tank as good as it can possibly be. There’s so much to unlock in this game and the great thing is that, because there is so much, the developers have allowed the acquisition of these upgrades to be spread nicely across levels.

You level up as you play the game, each time you go up a rank you’re awarded with a bit of extra money to throw around and some new tanks to unlock so, as you can already assume, the higher-ranked players have the more powerful tanks but the good thing about this is that you can only enter games where the other players are around the same level as you so you’re somewhat on an even playing field. Personally I like the idea of a levelling system like this, it gives you more incentive to continue playing despite not being the very best as you start off the game, those who persevere through the hard beginning are rewarded with some awesome playing skills by the end. 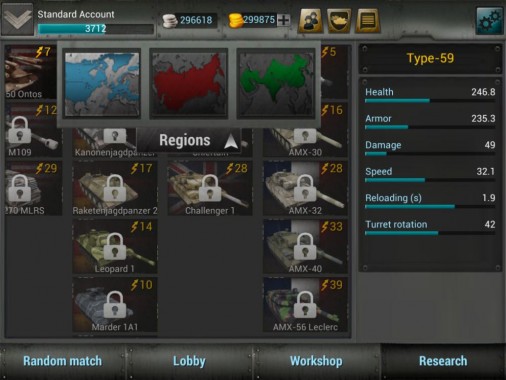 There are so many upgrades and customisable items for the tanks in this game, from different camouflage to different ammunition types, it is all there but the thing I really want to talk about is the large amount of tanks that are unlockable in the game, I know I spoke about it just before but I really would like to mention this: There IS a reason to try and unlock tanks, not only are most stronger than the tank you start off with but they all have different specifications to help when playing in team matches.

Some tanks are lighter and faster so they can zip around a “capture the flag” match without much issue but they’re easily destroyed which means you have to have good control of it to be a good player with it, some tanks are extremely sluggish but back unfathomable power that can take down other tanks in nothing but two shots but they’re easily outrun because of just how slow they are. The point is that the developers haven’t just given you 50+ tanks, they’ve given you 50+ ways to play and, yes, some tanks do the same sort of thing but it is up to you, the player, to change and customise it to suit your playing style. I just think they’ve done a fantastic job. 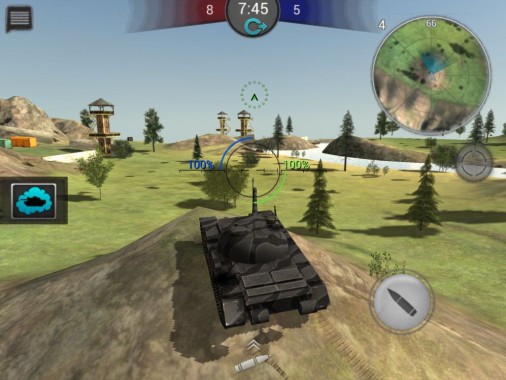 This game basically has everything you would want out of a game like this, some of them don’t quite hit the mark but you appreciate them being around for the most part: It has a live chat window that you can open up in game and use to talk to your team-mates, though it is only text-based and it can get a little tedious to stop mid-game and send a message, not to mention a lot of my team-mates while playing through this game spoke different languages so the whole team chat idea quickly went down the drain. At this point in time it only has five maps which vary in size, one or two are fairly small yet you almost get lost in the others so it somewhat evens out, I feel as though you’re more paying attention to what’s going on in-game than what map you’re on but it would still be nice to have a few more options.

I really hate to say this because I actually thoroughly enjoyed the game but there were problems that occurred time and time again which continuously kicked me out of games I was in and took me back to the main menu, it’s actually a bit of a big deal when it happened to me at least one or two times per gaming session, there’s nothing worse than being midway through a game and it cuts out BUT I will give these game the “benefit of the doubt” because I played this game both before and after they massively updated the game and they did so damn will with it that I can assume the next one will fix the little things wrong with the current version and build upon it. 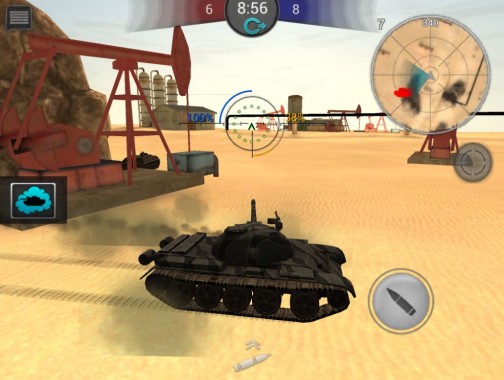 The capabilities of mobile devices are actually a lot higher than what the general public assume and “Tanktastic” is a true testament to that because of it’s extremely good-looking visuals. While it isn’t anywhere near perfect, nor is it anywhere near comparable to console games I have to say that I’ve played games that didn’t look quite as good as this game does and while there are still a lot of things that look rough around the edges, it still all adds up to a great looking game. I want to focus on the environments for the moment; they look great and some are quite vast but it is the layout of the environments that I was more impressed with. Because of the games realistic tank controls, some targets are harder to hit because of small environmental obstacles like crests or dips and they’re all very strategic places.

The way the tank moves is actually very impressive, not only do you leave tracks in the dirt as you plod along but your tank also rocks back and forth when you fire a round, it’s got some impressive little details and I can overlook the need for improvements with regards to environments simply because I’m so focused on how good the tank moves. The various tanks also look great, most of them are based on actual tank models and even the ones that aren’t still look as though they could exist somewhere, plus each of them is unique enough for you to be able to pick which is which without getting confused, there isn’t a great deal of design overlap. Obviously there are a few things that need work aesthetically but they can be overlooked, for the most part. 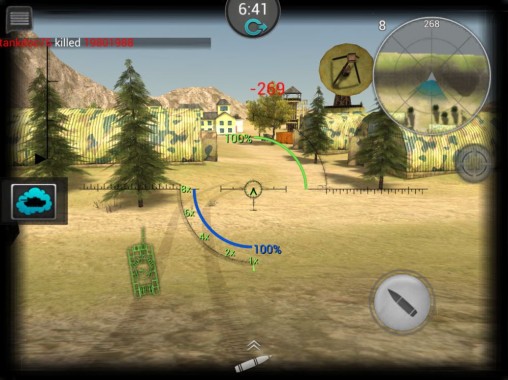 Now I have to say; there isn’t actually a great deal of audio within this game but the audio that is in it is actually fitting. Auditorally the big thing that stood out was the sounds of the in-game tanks, they were actually fairly spot-on and, while I don’t actually have that great of a knowledge on tanks, I assume this is close to how they would sound. The noise of the caterpillar tracks, the idling of the engine, the unloading of a round and the sound of the explosion it makes when it hits an enemy, they were all fairly on-cue and it added to the realism of the title.

While that is all good and well, there was a fairly huge lack of music within the game, there was one track that plays in the main menu and apart from that there really isn’t anything else which is somewhat unfortunate but, in saying that, I feel as though players would prefer to be able to hear what was going about on the battlefield so I’m going to say the lack of music was something deliberate rather than a mistake. I know I seem to be harping on this but I can’t help but feel so impressed with the way the tanks sounded and the actual hearing-based atmosphere of the battlefield, it was great! 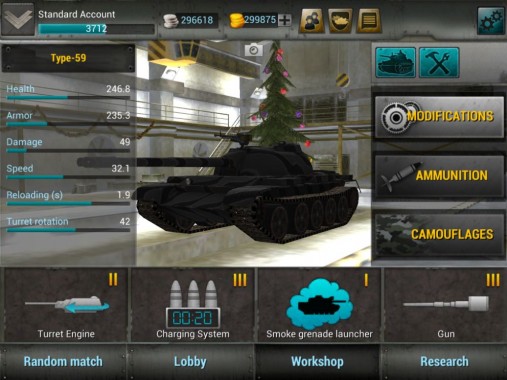 “Tanktastic” is a brilliant game that brings the best parts of action, shooting and MMO-style gameplay to mobile devices which is something I think bigger devices like tablets really need. I will give one little warning to all those who are interested in this game: I wouldn’t suggest you play it on small devices, to really enjoy it you need a large screen because it allows you to both see more and to play a lot easier, I tried it out on both and iPhone and an iPad, guess which one I found more enjoyable? It’s quite an addictive game that almost forces you to continue playing so as to level up and become better, unlocking different tanks and different upgrades along the way.

Don’t let the fact that it is a free game deter you from a purchase, unlike other free-to-play mobile titles, this one doesn’t constantly berate you into giving it money, it’s entirely up to you how you play the game and whether or not you use real cash which is refreshing for a mobile game. “Tanktastic” is great for those of you who would consider yourselves “military enthusiasts” yet it’s also great for those of us who just want a fun game that we can both get deep into yet put down easily when it’s time to do so. It is a fantastic game that really will not disappoint so open up your mind to “Tanktastic”!