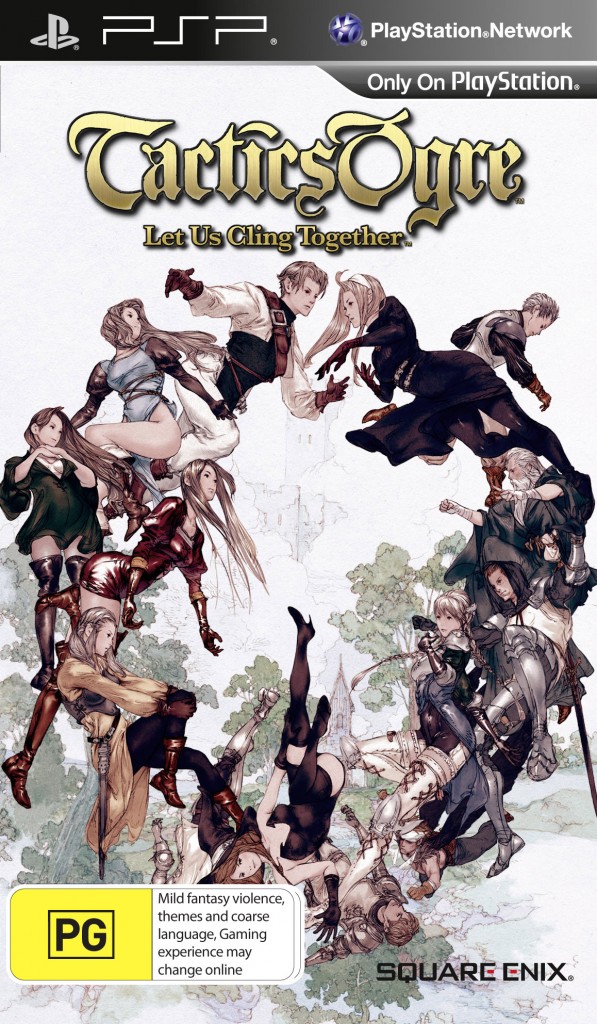 Overview:
Square Enix has brought a variety of older games to new generations of gamers through the PSP and through the PsOne classic section of the PSN but one thing is certain. When they pick a title that they are going to go all out on and remake, they certainly know how to pick them. Tactics Ogre: Let Us Cling Together may not have been the most memorable title for some back when it was originally released back in 1995.

Now rather than simply take the title and release it without any changes or upgrades, Square Enix has added a number of different things to the title. Now have these changes made Tactics Ogre: Let Us Cling Together as memorable as it was over a decade and a half ago and does it add even more to the tactical RPG experience?

Story:
Tactics Ogre:  Let Us Cling Together involves the land of Valeria as it falls into war and political strife.  The three nations of Bacrumese, Gargastan and Walstanian have been at war for some time and lately the Gargastan nation has grown to be a powerful force. Denam Powell may have just been some boy from a port town but his actions will shake the foundations of Valeria to its very core. 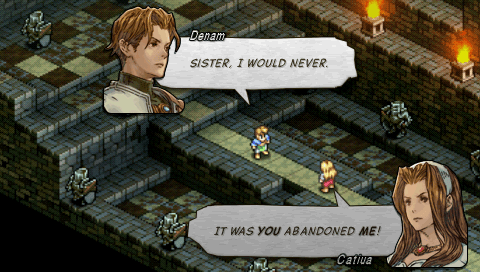 Tactics Ogre was always a game that told its story through powerful character interaction. While the story may be constantly moving forward the characters themselves always act for what they think is right. But what about the choices that person makes? One man’s word may cause the deaths of hundreds of soldiers or thousands of innocents and that is what Tactics Ogre will lay at your feet.

Today’s gaming world is full of games that have a choice system. Saying one thing will make you good, saying another will make you evil, or saying this will make that person like you more. In Tactics Ogre there is something entirely different at hand. There are no easy choices to be made. Every choice can be broken down into three different categories: Lawful, Neutral and Chaotic. But exactly what each one signifies is entirely different.

Performing a lawful act may end up dooming an entire village of innocents to be wiped off the face of the map while a neutral path could have involved warning that village of an impending attack to help them escape danger. Or you could choose the chaotic option and fight to help the village instead. Nothing is spelled out clear for the player and their actions, even the smaller ones can have a large outcome on the story ahead. Certain decisions can turn your allies against you and make them your enemies. One choice may have an enemy become your new ally but the other choice would have been the end of his life and the end of his storyline. Instead though, because he died a new option for a story has been brought to light.

The multitude of branching story paths was something unforeseen back when the title released in 1995 and is still a hallmark of storytelling today. Few games can truly say that they can weave such a masterful telling without breaking away from player choice. Entire storylines can be passed over without the player even knowing it due to their choices which creates an amazing level of replayability for a title of easily over forty hours of length. 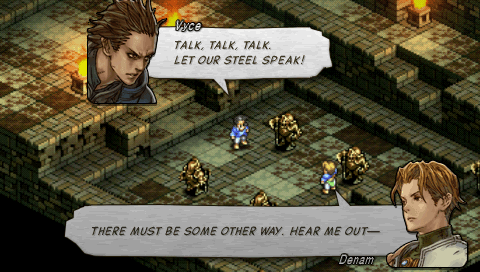 This is only furthered by the fact that once the player happens to beat the game the first time it unlocks WORLD mode. WORLD mode allows players to go back to specific moments of the story that they made game altering decisions and make another choice. This allows players to see what things could have been like if they chose a different option. Players can then continue on from where they selected and make different choices along the way and see all of the different outcomes of their choices and the different storyline that is being developed that they may have not ever seen in the first play through.

Graphics:
The thing about Tactics Ogre: Let Us Cling Together is that it is a port with upgrades from a title that is over fifteen years old. A lot has been done to advance the world of gaming visually in those years, but sometimes even an old sword will shine brightly when polished.

Now players of Tactics Ogre will spend most of their time on the battlefield where players will control their characters on an isometric 3D board that will allow them to navigate freely. Each battlefield has a unique personality to it that is helped by the varying levels of terrain and inclusion of breakable environmental objects. Even rocks are breakable if you so wish to destroy them.

On the other hand though the game does still show its age when you look at the character sprites themselves. While the portrait of each character outside of battle is great to look at and impressively well drawn the sprites themselves are very disappointing to see and can often ruin the mood of what you are playing due to the fact that the characters are just so visually unimpressive. 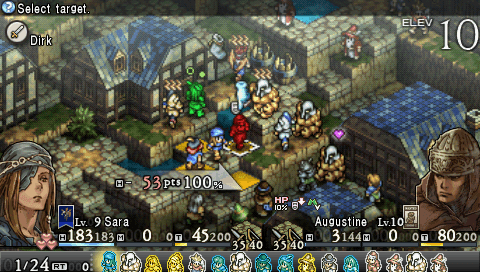 Audio:
Now earlier I mentioned that there were no cutscenes, and instead the story was told via text bubbles by the characters on screen interacting with one another. Because of this unfortunately there is no voice acting to be had for the title which means you will spend much of your time reading the bubbles, although this is not a major drawback for a remake of a title as old and as grand of scale as this.

On the other hand however the music that you will be doing battle to is perfectly handled. Originally worked on by Hitoshi Sakimoto and Masaharu Iwata each song has received an orchestral upgrade as well as a few new tracks being placed inside of the title. The large amount of songs that are in Tactics Ogre makes it so that you will find yourself hard pressed to listen to the same song over again without returning to the same battlefield a second time. The music itself is easily one of the highlights of Tactics Ogre as it blends the sorrow of a battlefield together with the action occurring on screen and doesn’t falter in the slightest.

Gameplay:
Players will take the field in your standard tactical RPG type battlefield with up to 15 different characters able to move a certain amount of spaces on the battlefield, and then are able to attack with any sort of weapon they have at their disposal if an enemy is within range of that weapon. Now, although the standard battlefield practice is the same as one would expect from a tactical RPG, there are quite a few differences to be had in Tactics Ogre: Let Us Cling Together.

First of which is the fact that instead of every character gaining individual experience and leveling up on their own like a standard RPG, Tactics Ogre handles things a bit differently. Instead of character’s leveling up, the character’s class levels up. Meaning that if a character is a warrior class or a cleric class then that class will gain experience and level up. This means that any class you have had in battle will also share a pool of experience points. With the way that this system works it cuts out much of the time that players would have to spend grinding away at levels for new characters that join their army later in the game. 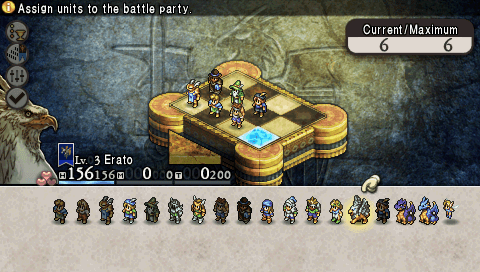 Although character classes level up whether or not they take part in a battle or not, the characters that do take part still gain skill points for surviving a battle. These skill points can then be placed into unlockable skills that can then be equipped to that specific fighter. Each of the numerous amount of classes within the game has unique skills only for that class which will leave you having to think as to how exactly you build your army for the fights to come because not only are you limited to ten skill slots, but those skills could easily change the tide of a fight if placed correctly.

Of course the characters that you bring into battle can always run the risk of dying but even that has been lessened than the original game. Rather than dying permanently the first time they are killed, allied characters will fall in battle and can be revived within three full turns of when they were dropped in the battle. If you happen to revive them in this time period then there is no repercussions. If not that character will not gain any of the skill point or if it was the only fighter of its class on the field, class experience. Also one life is taken away from that character. Each character has three lives that are able to be used but after they have dyed a third time they will remain gone from the game. Though considering players can transfer that deceased character’s skills into another fighter later in the game this is more of a small problem than a game changing character loss.

However if you do happen to lose a character in battle or think that you did something so incorrect that you will not be able to win the battle then you shouldn’t lose hope because of the new gameplay mechanic called the Chariot System. The Chariot System allows players to turn back time up to fifty combat turns and fix a mistake that they may have made that caused a character to die or a fight to be heading for a loss. This mechanic is certainly a great inclusion to a game that is actually quite difficult at times. Mastering the game’s classes is essential and even then some fights may appear too hard at first until the player takes a step back and looks at the whole picture. 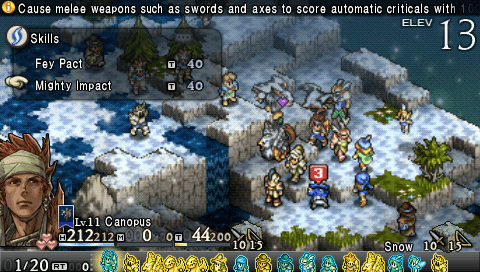 Now not everything is great about Tactics Ogre: Let Us Cling Together, though most is. Battle objective are never complicated, slay an enemy leader, or all enemies and you will win. Sometimes a battle may ask you to keep a guest NPC alive but unfortunately this is a hard task due to the fact that the friendly AI is anything but friendly because these NPCs will cause you much grief as they have little survival instinct. Of course as I mentioned during the story section of this review, every dead character can cause a major impact to the story so anyone signified by a side objective is usually important enough to protect.

Overall:
Now Tactics Ogre can be seen as a title that helped shape the tactical RPG genre to what it is today. Square Enix has taken this old gem and polished it to a fine shine with upgraded music, new gameplay features, even more story content to a game that was already impressively long and accessibility that may have been lost on those who never played a tactical RPG before. Tactics Ogre: Let Us Cling Together has stood the test of time and this remake of the title has only shown that sometimes a classic game is the best thing you can turn to for an amazing genre defining experience.

I give Tactics Ogre: Let Us Cling Together