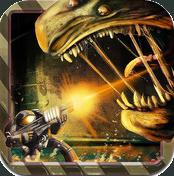 Overview
Clones on the iOS are a dime a dozen. You know the drill. A big company refuses to have anything to do with the growing mobile marketplace, and someone goes out of their way to create a “similar” experience for actual the classics, without harming any copyright laws of course. Monster Robot Studios are the latest to make that very plunge with SZC Beyond Dead, crafted exclusively for the iPad. Imagine Metroid with a dash of space marine and a dab of Dead Space. Yeah, that is pretty much the main concept behind Beyond Dead, and it’s obvious that the small team behind it were inspired by the very titles we all grew up on right from the get-go. So does this doppleganger pull off a tribute worth raving about? Let’s find out. 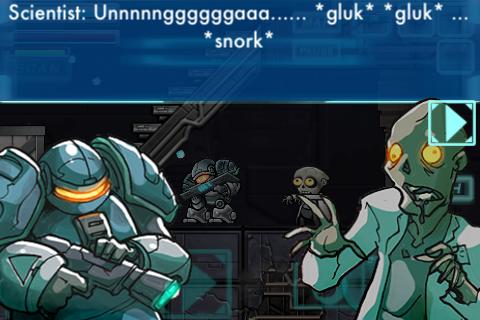 Story
If you go into Beyond Dead expecting to be blown away by a intense plot that compares to the many AAA blockbusters of today, you will be somewhat disappointed. Honestly though, a deep plot isn’t the point of this downloadable title to start with, and the little tale told is charming enough to keep the player interested as they traverse through a majestic space setting. In this game, players must assist Tank and Vera, (who resemble Master Chief and Samus) as they set out on a mission to investigate a facility filled with crazed zombie scientists and other terrifying foes.

There is a little more to the plot, but the concept alone is sure to catch the interest of several fanbases and whether your into sci-fi, or just enjoy watching re-animated corpses run around, you are sure to fulfill one of your fixes with this delightful and campy narrative.

Gameplay
If you have ever played any Metroid or Castlevania title, you should know what to expect when it comes to Beyond Dead’s “SNES-like” mechanics in tow (the Metroidvania did genre get it’s name for a reason). Players take control of Tank and must traverse a gloomy space station to progress, with a mini-map displayed up top that always shows you your next objective. Grabbing maps, weapon upgrades, and intel is the main motivation for progressing aside from the plot, and the freedom given allows players to go at their own pace and enjoy this nostalgia trip while scouring the map for any extra pick-ups available. 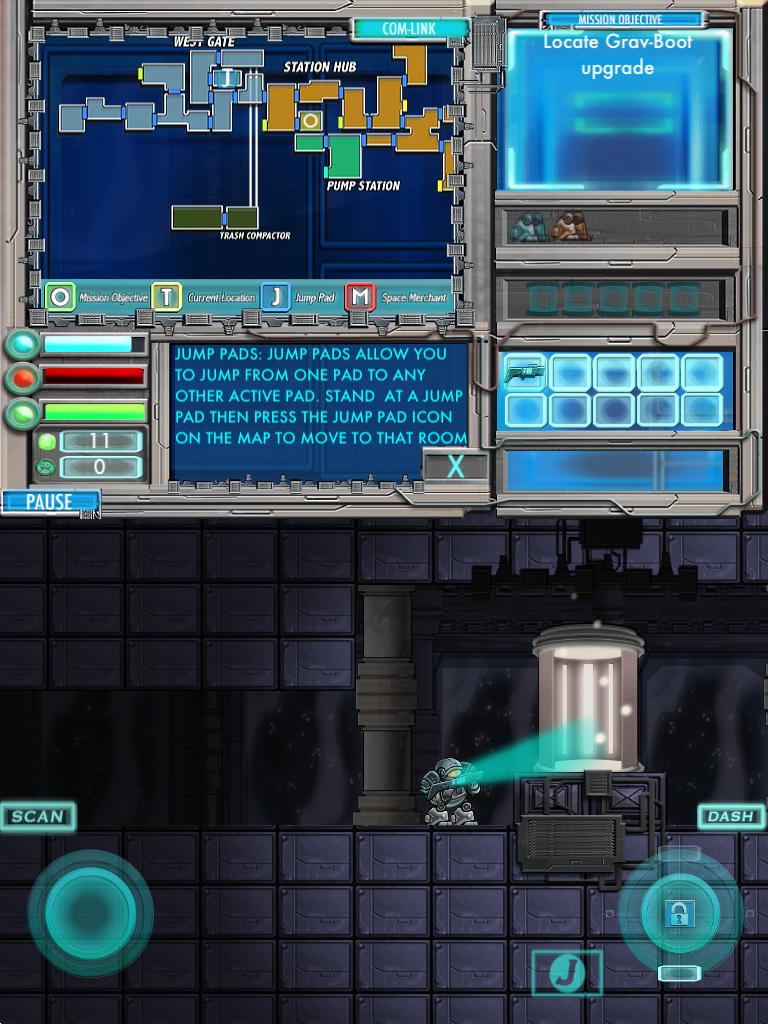 Now the concept of this title’s gameplay may sound great, but the controls leave a lot to be desired. Tank controls like..well, a tank, and is one very slow protagonist. Instead of utilizing the control pad for all movement, Monster Robot Studios decided to go a different route and create an extra control option to point where Tank needs to fire his weapon. This means that if an enemy is behind Tank, you then must spin your body around 360 degrees (which is a function of this handy suit) and then fire away in a preferred direction. I definitely can respect the idea behind these controls as they’re certainly unique, but movements are not very fluid and performing a task as simple as aiming can become a chore after just a few minutes in.

Jumping isn’t very easy for this space traveler to pull off either. While there is a jump button, Tank can hop to a higher platform if the player just hits up on the virtual directional stick. A lot of the time though, the platforms are just a bit too high and several jumps are needed to reach the next step up. The fact that there is no true speed (or animation) behind these pounces doesn’t help matters, as the whole “lack of gravity” gimmickry makes these jumps feel floaty and imprecise. Sets of stairs are also very present throughout the levels, but to climb them you must be locked on and take it slow or you will see your character fall through and then have to trek back up all over again. It’s very frustrating at first, but the more time I spent with Beyond Dead, the more I got used to this odd design choice. Don’t get me wrong, climbing stairs that seem to have holes in them and performing floaty jumps isn’t exactly fun and these tactics never see improvement later on, but I kind of grew accustomed at slowing down my own pace as I played, which actually made my enjoyment of the overall game grow as I played. 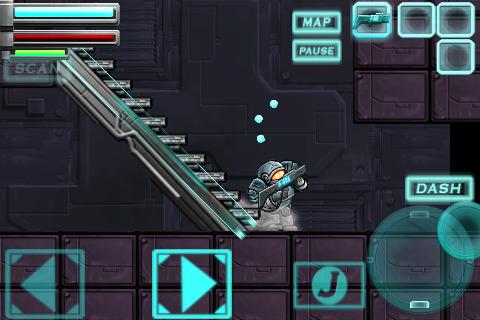 To fight off the zombies, monsters, or bosses, Tank has an upgradable arsenal at his disposal. Shooting is easily performed with a press on the right of the screen, and unlike the movement, rarely gives much problem for the most part (aside from the aiming issues which I mentioned earlier). Also equipped is a scan visor, which can be used at anytime to further detail the monsters that inhabit this creepy setting as well as the many doors and items you may come across. One could spend a good amount of time just flipping through all of the lore that this visor unlocks, and much like Metroid Prime, it’s rather small inclusion provides a ton of incentive to explore and scan everything you come across. For those who want to speed Tank along his path, a dash feature has also been included, which comes in handy when dodging oncoming enemies.

Visuals/Audio
While the gameplay may not be up to par with the heavy hitters that Beyond Dead tries to emulate, the visuals are honestly the coupe de gras of the entire experience and make this title well worth the dollar price-tag. Throughout the game, players are treated to fantastic 2D sprites that are heavily detailed and full of character. The zombie scientists break up the serious and eerie environments, adding in a bit of a cartoony flavor that acts well as a balance and fits in perfectly with the retro-esque game design. The top screen menu also makes this title feel as if it were ported straight from the DS, and makes navigation simple as everything you could possibly need is always just one touch away. Animations are a bit stiff, however, and in a future update, I would love to see a bit more done to make the protagonist a bit less robotic and a tad more human. 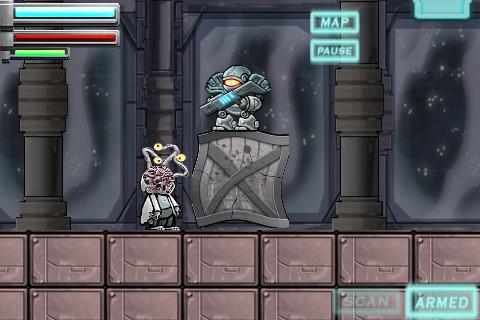 There isn’t much of a soundtrack to Beyond Dead, but what is present is certainly noteworthy. A guitar driven song is played as you progress, which is simply exquisite and sounds like a secret track that should have been in Super Metroid. This music choice also provided a great deal of atmosphere to match the top-tier artwork, which in my opinion made even of the most frustrating of situations more enjoyable just due to it’s existence. Sound effects are not too effective in making weapons sound powerful, but are just sufficient enough to make you feel like you are actually doing damage.

Overall
At this very moment, SZC Beyond Dead feels like a piece of the Mona Lisa, but without that famous smile. The art and audio are simply brilliant, and the story and characters within do a fantastic job at paying homage to all of the protagonists we grew up with. Sadly, the game feels a bit unfinished when it comes to the gameplay. Yes, there are some great ideas at work and you can tell that Monster Robot wanted this title to be unique on it’s own, but the lack of polish and proper animations keep this tribute from reaching it’s full potential. At the end of the day though, this title is well worth it’s asking price and then some, as this work in progress is sure to see future updates to correct it’s current flaws and is still one of the better Metroidvania titles on the platform.

As I was writing this review, Monster Robot have now delivered an update that greatly enhances the control scheme and allows for full movement to be controlled with the left stick, with shooting and jumping commands now controlled with the right stick. This definitely assists with the nagging problem of aim, and jumping is no longer an issue. The updated score can be found below.