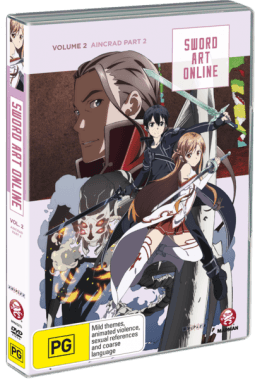 Slowly but surely we’ve made it into the age of videogames. Many years ago playing video games was something only certain people did and, for the most part, it was quite a niche market…not anymore. “Sword Art Online” is an Anime that originally began as a light novel series written by the very popular novelist Reki Kawahara (Fumio Kunori), it eventually became popular enough to warrant an Anime adaptation and from then on in the popularity of the series soared to even greater heights. With its videogame-based storyline (which is quite appealing in this day and age) and its semi-relatable characters, it is easy to see how and why this Anime has become such a favoured series in the hearts and minds of many Anime fans around the world. Madman Entertainment has only recently released this series “down under” and luckily for me I’ve been given the chance to review it. I think it’s about time we “log-in” and see what all the fuss is truly about. 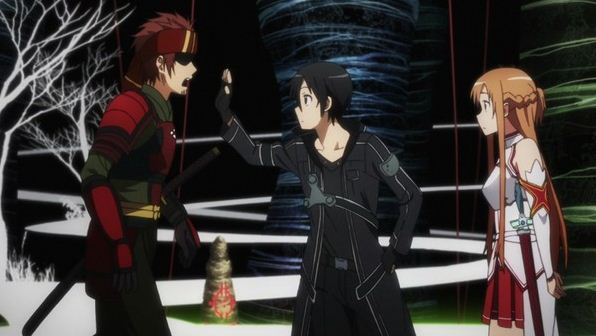 Volume 2 continues directly on from Volume 1 (read our review here) though there is a bit of a timeskip inbetween the two. It has now officially been two years since the players of Sword Art Online became trapped within the game and the quest to complete the entire 100 floors is still in progress with the online community hitting the high 70s number, this means they’re all fairly close to getting out yet there’s still quite a long way to go before they can. Kirito continues on his lone quest as a hero but over the course of the story within Volume 2 it seems he changes his tune pretty quickly when he once again reunites with Asuna, a player he felt some sort of spark with when he first met her in the events of Volume 1.

I’ll try my very best not to give much away but it will be quite hard to NOT considering the points I intend to make so I’ll slap a low-level “spoiler” warning on this part of the review just in case it does turn out that way. Volume 2 has the series slowly transform into more of a simple fantasy story rather than the “players trapped in game” story that it hosted at the start of the series. Players have somewhat forgotten about the real world and have started living in Aincrad as if it was reality rather than a videogame, it’s obvious enough for the main character to point out so I’d say it was a purposeful storyline development and to some people it is a beneficial change but for me it was not and that is only because the main characters also changed, they lost sight of the their original goal for what seemed like a great deal of this volume and I felt as though this was a mistake on their part. 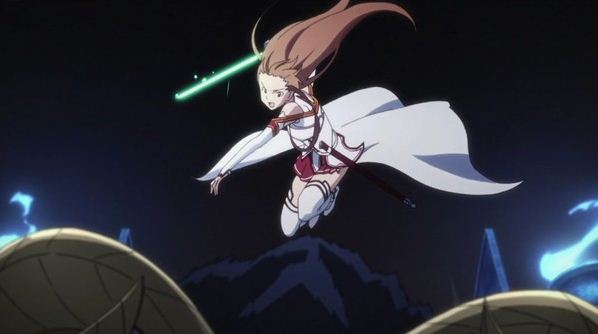 Volume 2 Aincrad Part 2 had a pretty solid focus on the romantic connection between our main characters; Kirito and Asuna became incredibly close and, despite being a part of the “Assault Team” and the “Knights of the Blood” guild who are self-tasked with the completion of the game, decide to take a small vacation away from the “hustle and bustle” of surviving so that they can instead work on the romantic side of Sword Art Online.

I’ll give the creators this much; it did set itself apart from other series’ because two characters actually get together despite the whole “I’m too shy to tell you how I feel” dilemma from both parties but, as mentioned, they lost site of the main goal and it actually worked to revert the character development we saw in the first half of the series. Spoiler: Asuna became somewhat of a needy bride and Kirito played on the “you’re my wife, I don’t want to see you hurt” ideal despite Asuna proving herself to be just as good a fighter as Kirito himself so I’m not too sure why they would go ahead and do something like this but I suppose it is what they assumed the audience would love. 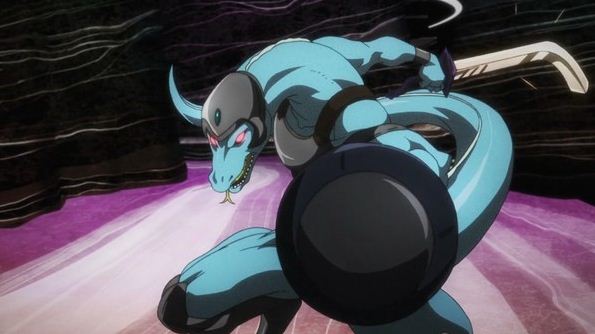 Certain things transpire when Kirito and Asuna find a young girl passed out in the woods near where they live, yes it becomes that real, and after a short story arc with here we realise that this series isn’t all it is cracked up to be; it became for too corny for my liking, things just happen to fall into place for these characters and I understand they are the main characters living in a fantasy world but there are also certain ways to go about things and this was not one of them.

Unfortunately I cannot outline exactly what I’m referring to only because it happens closer to the end of the volume and I’m not sure people will be too happy about it being spoiled. The series ends in what I’d consider to be an extremely typical way and I was actually hoping it would end the story in a negative way rather than a positive only because it would make both more sense and an ending that I believe would’ve made a greater impact on the audience but, as always, these are my opinions and my opinions alone. 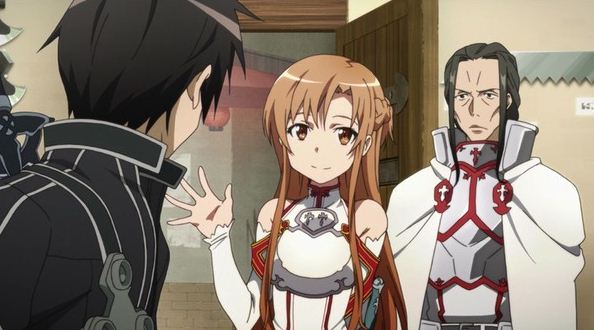 Volume 2 was visually the exact same as volume one and, considering they’re both a part of the same series, I’m not surprised there was any change in aesthetic quality. If anything I was less impressed with the environments of Volume 2 simply because the story was not written in a way that would have the characters journey through these expansive and beautiful environments, unlike Volume 1 to which I compare. The animation stayed the same; great and I’m so glad it did because, as a fan of action, I longed for battle scenes that hosted extremely high calibre animation quality.

Battles were few and far between with the count being something small like two or three within the whole volume, though those battles were quite high-octane and fairly entertaining despite being short. There isn’t much that can be said about Volume 2 that hasn’t already been said about Volume 1; the animation is still great though the characters aren’t put into to many situations where the animation team can go all out, the environments are good but once again the story doesn’t take us on as much of a journey as it did last time so we’re not really shown as many beautiful environments. All in all it still looks fantastic! 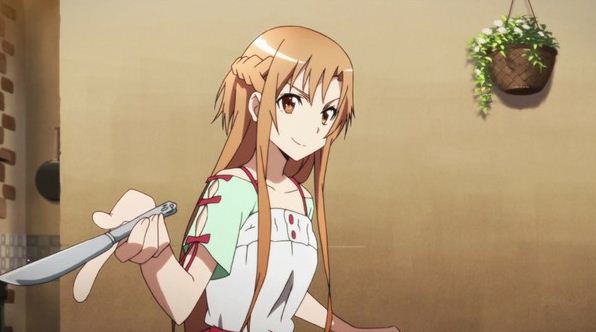 Much like the visuals of Volume 2 Aincrad Part 2, the audio still stands at quite a high calibre much like it did in Volume 1. My only complain would have to be the voice acting and I can’t entirely say it is the actors/actresses fault because they are only to read what they have been told to so more of the blame goes on the scriptwriters and translators rather than on the performers themselves. Some of the dialogue is just so horrendous; breaking character and saying things that dwindle the impact of situations came up a fair few times, not to mention some of the silly secondary characters and their pieces of dialogue.

Luckily for the series most of the characters have great voice actors and actresses, even our two main characters who go through a pretty bad stage where their interactions are somewhat cringe-worthy. The music is kicked up a notch in Volume 2 with the use of some rock and fantasy tracks being entirely on key with the situations within the scenes, the music team really made their bones with what they did in Volume 2 (as well as volume 1) and it did a lot to bring up the value of the series and make situations all the more intense or emotional. 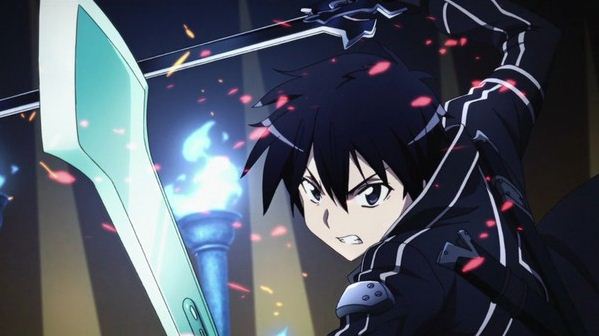 Once again this release does not feature any real on-disc extras apart from the usual textless opening and textless closing sequences that come with every Anime release. It does, however, continue from what Volume 1 did previously and it does come with a set of six postcards that feature art from the series which looks to be done by several different artists considering they’re each in a different style. These extras are fantastic for those of you out there who absolutely love the series and the characters because each of the postcards depicts another character or group of characters in settings not entirely seen in the series. Usually standard Anime releases come with no physical extras so Volume 2 Aincrad Part 2 gets points for trying. 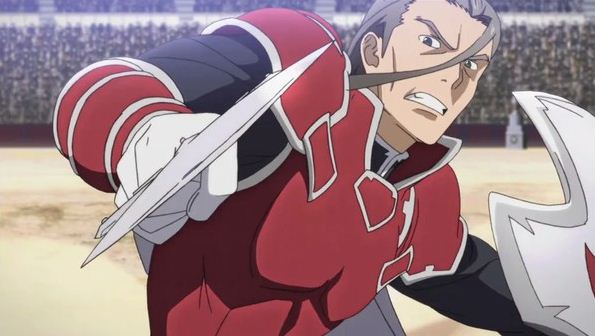 Look “Sword Art Online Volume 2 Aincrad Part 2” is a great Anime release that comes directly off another great Anime release (part 1) and the series in general is actually fairly good, the only real problem I had with this Volume is the actual story; it lost sight of its main goal and its characters were no where near as good as they were within Volume 1. I know I’ve been comparing the two volumes the whole way through the review but I believe it to be justified considering they’re both a part of the same series and to understand one you really need to understand the other.

Fans of fantasy Anime will absolutely love this and so will fans of romance because volume 2 really kicks up the “lovey-dovey” side of surviving in a strange and dangerous world. If you’re a fan of Anime series’ like “.Hack” or “Log Horizon” than you’ll definitely be into this one so give it a good try but if simply reading what I have to say about the series is making you hate this release than I guess it’s just not for you. There are a lot of players in this game we call “life”, if we were all the same it’d just be boring.