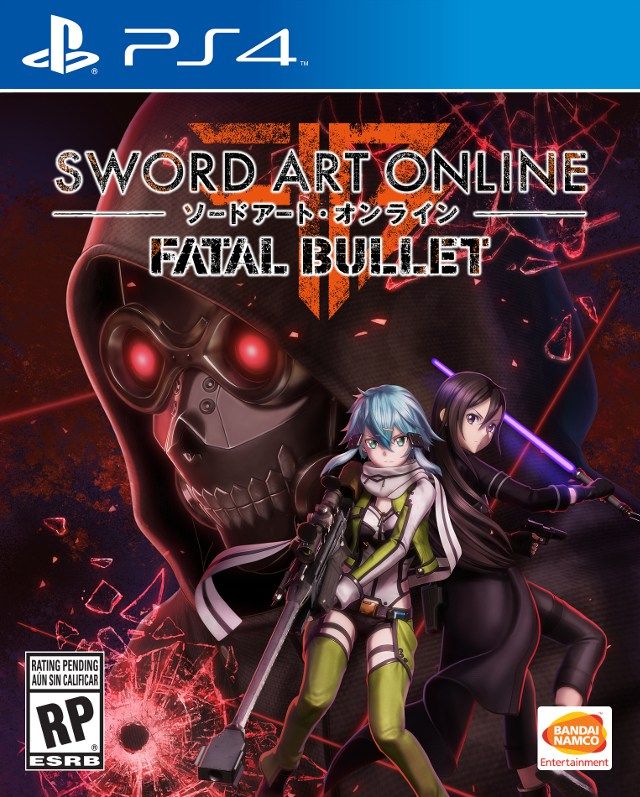 As a veteran gamer invited into Gun Gale Online for the first time by a childhood friend, the player has the good luck of winning their very own top of the line AI named ArFA-sys to serve as their personal assistant in and out of battle. The players soon encounter famous faces from the Sword Art Online franchise as they seek to become a top player in Gun Gale Online and develop their relationship with their AI. 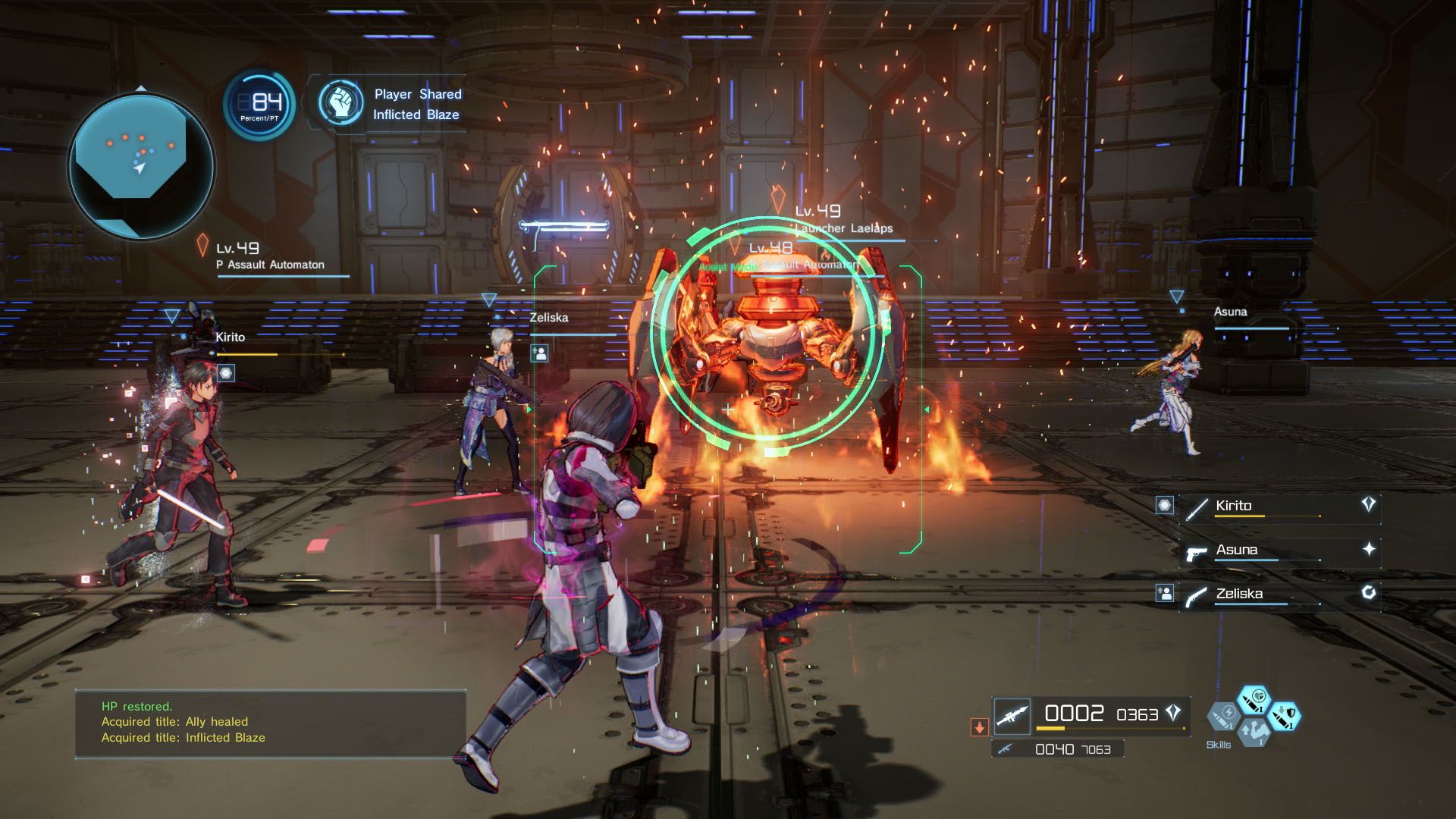 As someone who has never watched, read, or played a Sword Art Online title, the story feels Sword Art Online: Fatal Bullet’s weakest link. People new to the franchise are given a very short recap of some major plot points, but it never gets deep enough to stir interest. The game’s story plods along slowly, taking baby steps forward with every main mission completed. ArFA-sys should be a fantastic opportunity to explore the relationship we humans have with our AI assistants, as ArFA-sys starts as blank slate before blossoming into their own. Instead, ArFA-sys feels more like a stereotypical maid character that edges close to cringe-inducing fan service than someone I want to care about. The random conversations NPC party members will have in combat are especially bad as they are generally bland or downright awkward to read. Additionally, the lines are few in numbers, so be prepared to see those lines over and over again. Fans of Sword Art Online might have more reasons to be emotionally invested in the story since they know many characters and the lore to start with, but the writers of Sword Art Online: Fatal Bullet give little reason for franchise newcomers to care about the plot.

Sword Art Online: Fatal Bullet is a third person shooter/RPG hybrid with some elements designed to mimic the MMORPG experience. The game is an extremely fast paced shooter, with emphasis on hack ‘n slash style dodging, dungeon crawling, and massive boss fights. Players can customize their own character and ArFA-sys. Characters can carry two weapons, limited by both weight and stats requirements. Weapons range from the humble sword to massive rocket launchers. Additionally, customizable characters can equip up to four skills and four gadgets. The final two party members are rounded out with both original characters and ones from Sword Art Online Alternative Gun Gale Online. These characters come with pre-set weapons and skills filling a variety of niches. The gunplay feels great. The frantic pacing is a lot of fun, and the game rewards players who are skilled enough to aim for critical points. 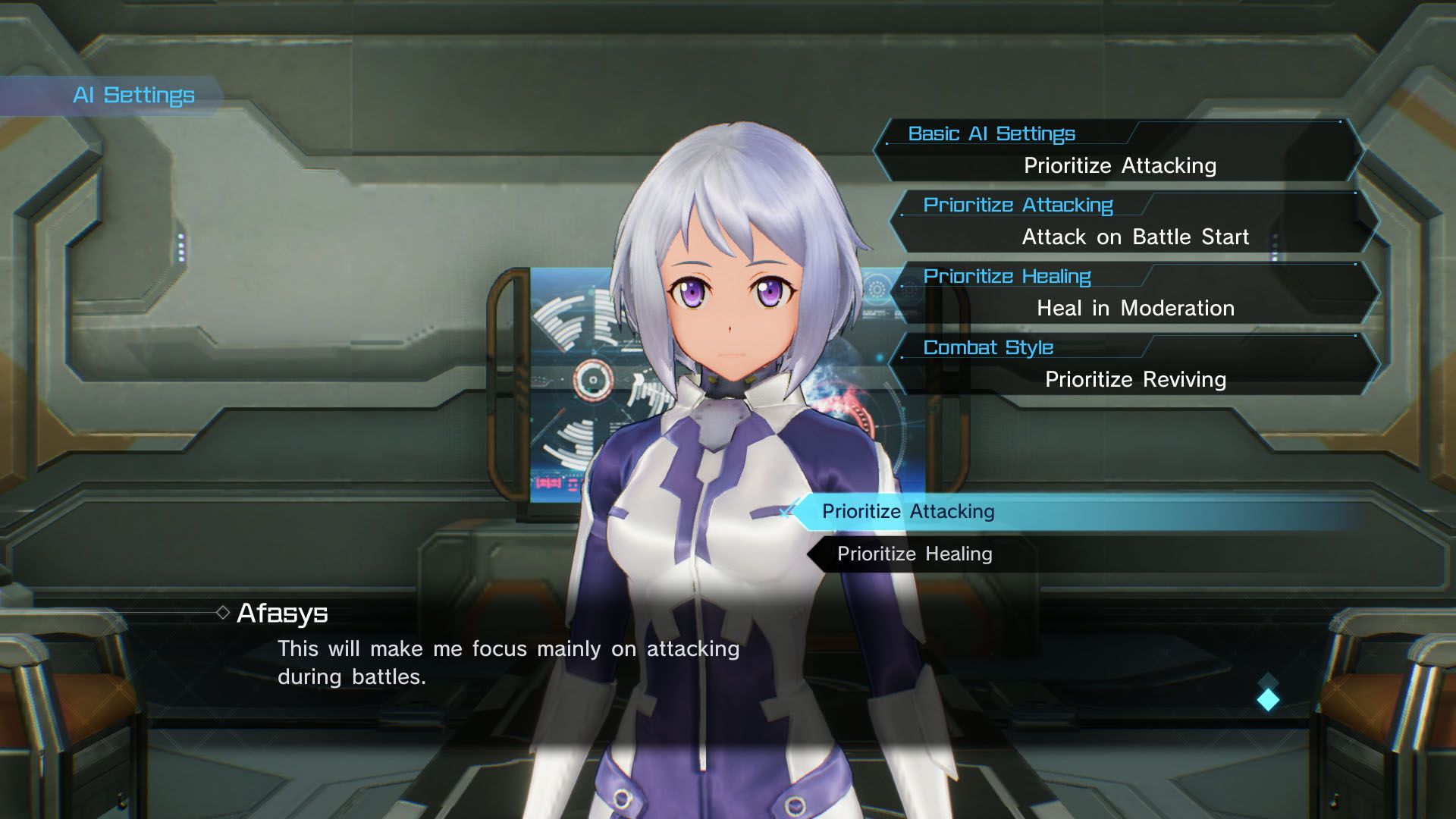 Sword Art Online: Fatal Bullet feels very much like an Asian MMORPG with some of the grind cut out of the game. Players work out of a hub town and visit various locations around the map that are filled with enemies that respawn on a short timer. Scattered around the area are world bosses and NPC “players” that will randomly engage in “PVP.” The “PVP” is probably the most annoying part of combat, as party members are not always very good about engaging distant enemies. Enemy “players” will resurrect their downed party members and will continue to do so until the entire party is downed. If your team isn’t helping, then these battles can drag out into a long stalemate. On the other hand, the boss battles are the game’s strong suit. These multi-stage fights remind me a lot of MMO boss battles as use a lot of telegraphed, hard hitting special abilities that need to be dodged. The bosses tend to soak a lot of damage, which means firing away at weak points is absolutely critical.

The game’s item system can use a bit of refining. Anything of real use must be dropped by enemies, which means players are stuck grinding if they are sticking to a specific weapon type. There is no weapon crafting system, only an upgrade system that is extremely material hungry and caps out at three upgrades. Frustratingly, the upgrade system requires players to unequip any weapon they wish to modify. 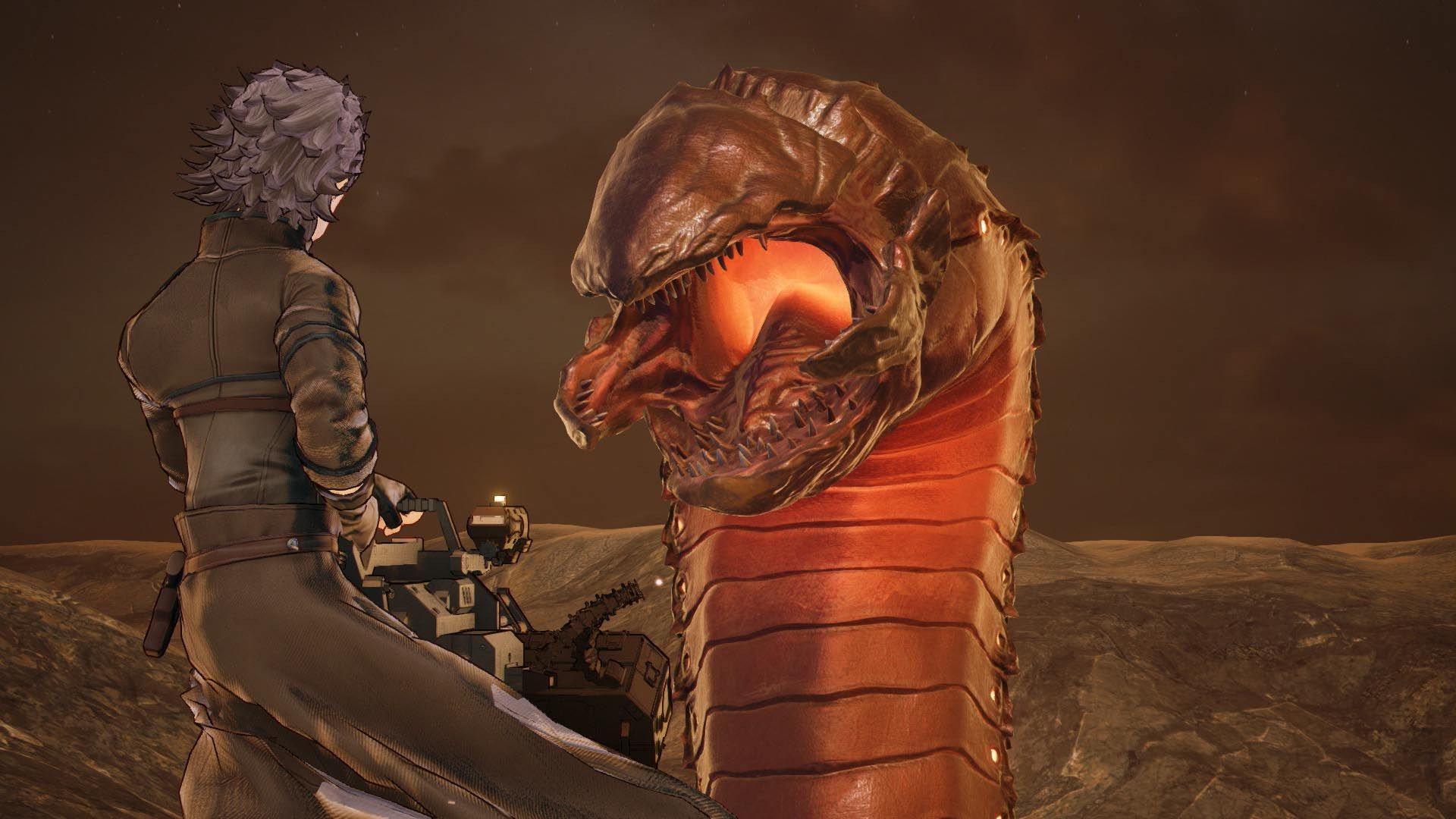 The controls are decent.  I like the aim assist mode that gives players a much larger targeting area at the expense of accuracy. It’s perfect for gamers who don’t play shooters very often or aren’t used to a controller. Although I prefer the finer controls of the mouse and keyboard, I still found myself toggling on the aim assist to ensure I would land my healing shots on friendly targets. On the other hand, the limited up/down camera angle is a huge frustration when dealing with flying enemies, especially the ones that can’t be dragged to the ground.

The PC port quality leaves quite a bit to be desired. While the game runs on Unreal Engine 4, the graphic options are quite slim. There is no mouse support in the menus. Keybindings for directional and use key does not carry over to the menu, instead falling back to the default bindings. Most PC gamers using WASD won’t be affected, but those of us who don’t will be annoyed to no end. Additionally, there is no way to view the advanced PC options in game, as those options are only accessible from the main menu. To cap it all off, there are actually two aim assists in the game, the earlier mentioned assist that can be toggled on and off and a more traditional aim assist designed for controller toting users. Unfortunately, the latter cannot be disabled for mouse and keyboard users. 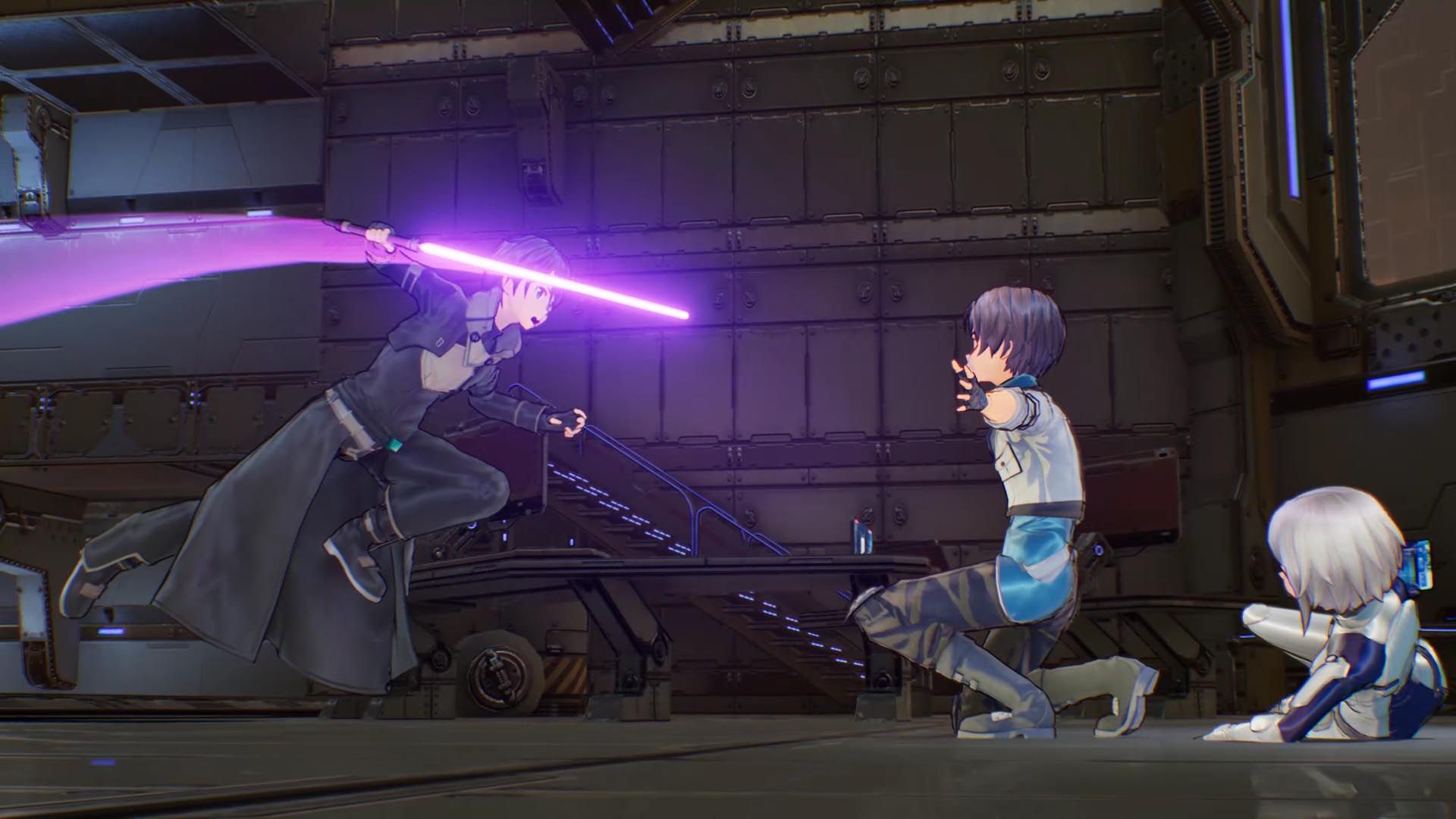 Sword Art Online: Fatal Bullet’s visuals are a bit of a mixed bag. The sci-fi designis solid, and many real life guns are lovingly recreated in game. The outdoor locations look great, with each zone having its own visual theme. On the other hand, once you’ve seen one dungeon, you’ve seen them all. Each dungeon simply reorganizes the rooms in different layouts. While the enemies themselves have an eye-catching visual design, enemy models are reused regularly with some different colours or sizes to differentiate them.

The audio experience is decent. The sound effects are solid. The soundtrack is pretty standard for a Japanese action title with more orchestral tracks broken up with some high-octane battle music featuring electric guitar. While it’s not the most unique sound, it’s enjoyable none the less. The voice acting is all in Japanese and is very good; however, there is a serious shortage of lines in-game. It seems like each character has only one or two sounds of exertion and two or three lines. 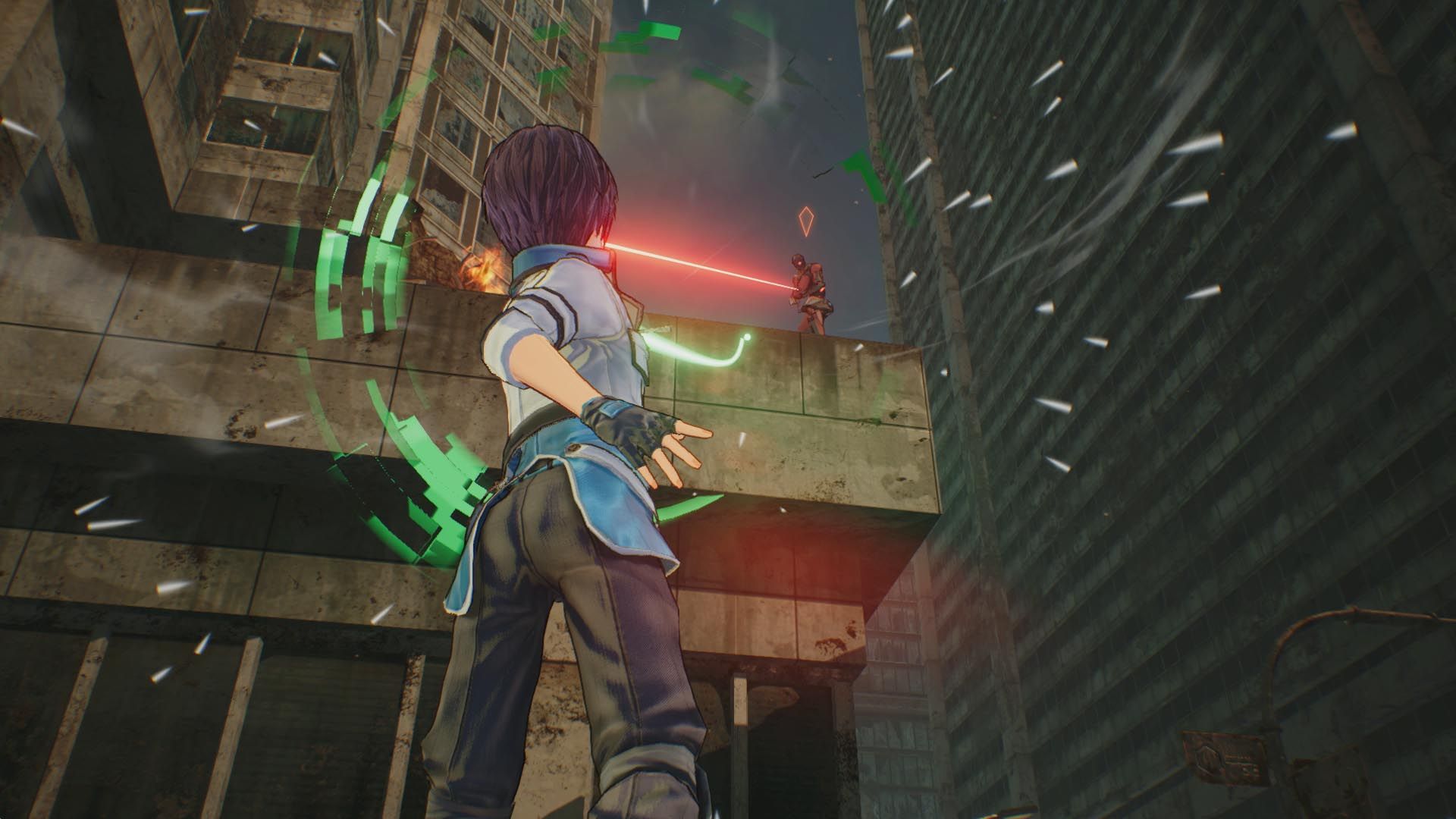 Sword Art Online: Fatal Bullet is a decent third person shooter at its core. However, the developers have made some puzzling choices that really tarnish the game. The story is dull, the controls could use some polishing, and some audio/visual elements need more variation. To cap things off, the PC port falls short. Sword Art Online: Fatal Bullet is probably best left for the fans of the franchise.

A half-decent shooter bogged down with a boring story, a lukewarm audio/visual presentation, and a mediocre PC port.
6.5