You know that feeling you get when walk into the gambling section of a pub and it smells like dead dreams? Well I do because I don’t gamble on the pokies, I despise them, but each to their own. So that’s one way you could describe the initial impression of Swipe The Deck, it’s a quick turn around sort of game, simple but fun and it will please Poker fans all around. I’m a fan of poker myself, so simply looking through a deck of cards for combinations is pretty neat, but ultimately quite limiting in it’s depth. As a result, you have a game that doesn’t try to do anything special, it throws in multi-player and a few power ups to spice things up. But essentially it’s a straightforward affair, you swipe combinations on a deck of cards, it is what it is. 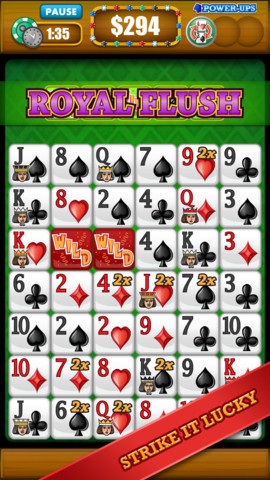 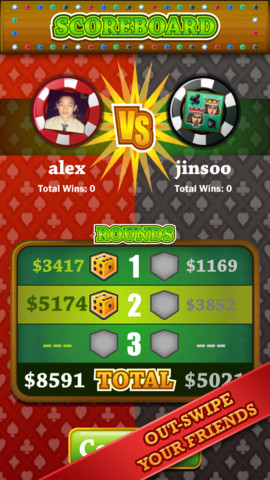 You can’t really expect much, right? The loading screens pretty cool though, the poker chips bounces across three cards as you wait, nice! I don’t particularly understand the icon of the game or the crazy king, since it doesn’t fit in with the generic theme, but whatever makes it more interesting I suppose. You got the standard colour scheme of poker, some nice bevels on the cards and funky animations across menu transitions. Other than that, it’s essentially a standard gambling game, you could walk into a pub and get the same thing there. But you’re not exactly playing a poker game for graphics, Swipe The Deck does a good job for what it is. Let’s not forget the games sound effects, which unsurprisingly are pretty average. It’s a similar affair, it sounds like a pokie machine room every time you get a combination. There’s an announcer everytime you score a hand, just imagine “PAIR!!”, “FLUSH!” then the sound of a slot machine. Can you see my issue with this? It can become fairly annoying, as such, I turned the sound off after awhile.

Swipe the deck, it literally explains itself, but I will do it for you dear reader (if there is any). So you swipe on the combination of cards (well it’s more like a drag), like a flush for example, which is five of the same suit for the poker newbs out there. I may have tunnel vision, but alot of the hands I swiped were flushes, I’d say almost half were. You have two minutes to get as many combinations as possible, try to get the highest score, the more difficult the hand the higher the score. Ground breaking stuff right? In all seriousness though, it’s simple time-wasting fun and power ups add a little extra to the mix. Race against the clock! It essentially comes down to being a frantic matching game, so it’s not strategy in the same way poker is, but it does play on your ability to observe quickly. 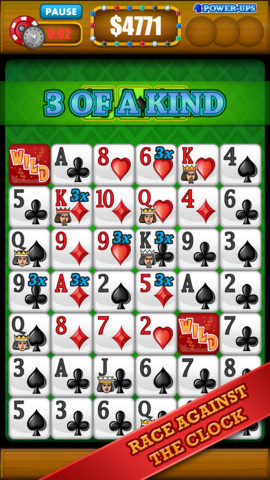 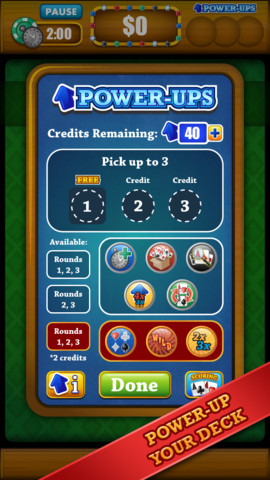 Power ups are things like adding an extra 15 seconds to the round, resetting the board of cards, revealing 3 high value hands, multipliers and swapping the location of cards. There’s also “wild cards” which are any card according to what it sits beside and also premium power ups, which you unlock in the store. Last time I checked, putting monetization into a game shouldn’t kill the balance or fairness in multiplayer, well this sort of does if you’re willing to pay. I don’t approve, and I don’t think most players would, but they’ve got to make money somehow right? As far as multi-player goes, you’ve got the standard facebook integration and random opponents incase you’re a virtual nigel (no offense)

Swipe the Deck, or as we’ve joked previously, replace the E in Deck with an I and the game sounds alot more entertaining/amusing. You basically have a game that doesn’t try to do anything special as I’ve mentioned before and you can’t really mess up a card-game. Poker or anything to do with poker is an old past-time and Swipe the deck is one of those games where you think “Why hasn’t someone done this before?”. It also throws in multi-player, but other than that I can’t really justify saying it’s anything great, it has a limited life to it. But if you like a decent spin-off game and enjoy poker, go for it.