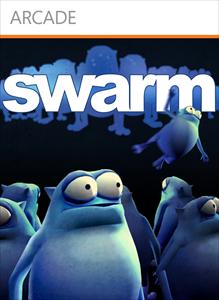 “An action-platformer where you take direct control of 50 pudgy blue morons and drive them through an intense and suicidal gauntlet of destruction. Run, bash, huddle, boost, stack, jump, push and throw your way through a ridiculously dangerous world in your attempt to collect valuable DNA and ensure at least one swarmite survives. Swarm features fast-paced platformer action and includes death medals, boss fights and a scoring system that encourages heated competition with your friends.” [Via Xbox.com] 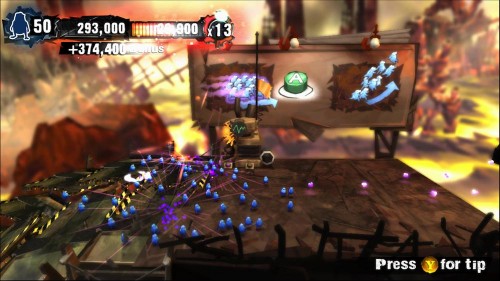 Gameplay
Swarm has a nice combination of platforming and speed running elements in it. The first time you progress through the game it lets you take your time and collect as many points as possible, but you have to keep your multiplier up in order to hit the required points needed to progress to the next level. Once you complete a level you can then return to the level and this time there will be a time multiplier and now you need to find the best balance between speed and getting all the points in a level possible. Leaderboards are built in that let you compare stats with people around the world for extended fun.

During the game you take direct control of 50 little swarmites as you charge through the levels attempting to get a good score while at the same time trying to kill off as many of your swarmites while not losing all of them. That is correct, in Swarm you actually want to kill off your swarmites whenever possible while holding onto enough to attain the best score possible. The perfect balance is different for every level and may take some player a while to find the perfect balance, but when you hit it and see that hi-score at the end it makes it all worthwhile.

Throughout the game there is DNA to collect and death medals to kill yourself for. Some of the DNA is required to progress through the game, but not all of it is and some of them are hidden quite well. The second series of collectibles consist of the death medals, and these are essentially collected by dying; dying a lot! Many of the death medals will come after time, but if you want them all you will need to play a lot and die a lot. On the bright side, dying in the game is incredibly fun. The little swarmites have so many ways of dying that you will enjoy their deaths and occasionally won’t even notice if one little guy falls as you progress through the level. After you beat the game going back to collect the DNA and the death medals will extend the length of the game.

My main gripe about the game is the control scheme. The basic controls are incredibly straight forward and easy to master; however, the more advanced techniques take time to master doing at fast speeds. Sometimes you may want to create a tall pillar of swarmites to collect the DNA, but instead of making the pillar you instead jump in the wrong direction and kill yourself. The camera angles and the explosions occurring on the screen also sometimes make it hard to tell where all your little swarmites are located at and even harder to hit the boxes for more points while keeping your multiplier up. 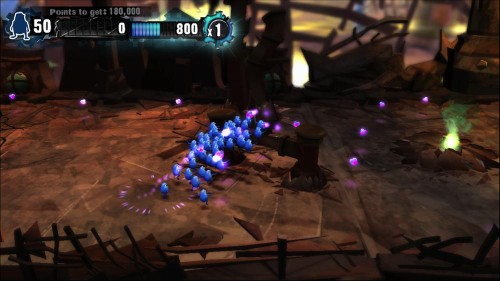 Audio & Graphics
The graphics are intriguing, with dark themed levels that all look sinister. To go along with the sinister feel there are tons of ways to kill your swarmites as you progress through a level, and tons of tiny little death animations as you chop up your swarmites, burn them, electrocute them, throw them off a cliff, or do any other number of sadistic harmful deeds to your swarmites. A nice touch is a “do not press” button on the main menu screen. By pressing this button you essentially sentence the swarmite on screen to an excruciatingly painful death. It is like watching the 100 ways to kill a sprite animation, and you can sit there for quite a while just killing the swarmite on screen. I wasted around 5 to 10 minutes in the main menu just killing the poor swarmites and another one would unknowingly walk back into the screen waiting for me to kill him as well.

The audio isn’t anything impressive, and there isn’t much to say about it. While the death sound effects are nice, the rest of the audio is simply there and isn’t very memorable. Simply put, while playing the game instead of saying “ooh, this is a catchy theme song for this level”, you will instead be saying “OOOH! That sounded painful… let’s do it again!” 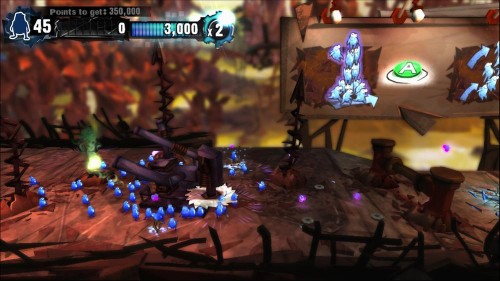 Achievements
The achievements in Swarm is a nice rounded list. There are quite a few easy ones that won’t require a lot of effort, but then the rest will require you to continue playing the game after you beat it in order to get them. The hiscore ones may be difficult for some, and then death medals just take time to get. Luckily dying is swarm is actually quite fun and it will be hard to complain about killing yourself in different ways while playing it. By the time you are done beating the game, unless you are really good at not dying; you will have probably finished a majority of the death medal requirements. The rest of the achievements are pretty much throw always that are quite easy to get. Overall the achievement list is a simple yet fun batch.

There are also two avatar awards but both are incredibly easy to get but they are also not that cool of an award either. The swarmite simply walks around you and then disappears, and the Swarm hat looks too normal.
Below is the achievement list: 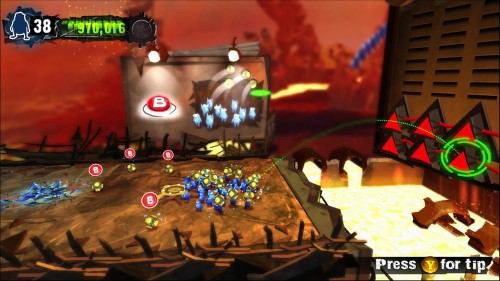 Overview
Essentially Swarm is all about dying, but dying skillfully. Rush through the levels as you attempt to beat a previous Hi-score or your friend’s score. Collect the DNA and kill yourself to accumulate deaths toward the death medals. While there aren’t many stages, it still takes some time to master each stage so that you can continue to the next stage. What could make a game more fun, then actually being required to kill yourself? The only thing that may harm this game for most players is the controls that take a while to expertly get used too, and the fact that the game is primarily dependent on the player wanting to get a new hi-score. If you just want to beat the game, there isn’t much here for you; but if you want to dominate the game then be prepared to die and die fast as you struggle your way to the top of the leaderboards.