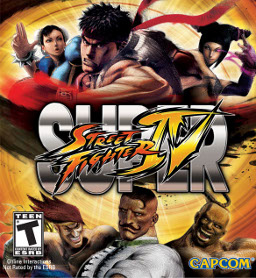 Capcom’s Super Street Fighter IV is back for another round.  It won the first perfectly, and also taking with it the fighting game of the year in 2009.  It’s return revolutionised and rebooted the series as Capcom had taken a daring move from 2D game play to a semi 3D feel and magically pulled off the impossible.  Graphically Street Fighter IV looked stunning, the 25 characters included in the game were amazing to watch with their combat animations.  This was something no one had ever seen before, especially when executing super moves. Street Fighter fans around the world rejoiced and celebrated as Street Fighter IV Ha-Do-Ken’d it’s way into their hearts once again.

The amount of new content added to Street Fighter IV was massive,  a cool animated storyline was added to all of the characters, with a introduction and end game movie once the player completed the game.  A full length anime movie, enough game modes to keep you busy for hours, and not to mention what makes Street Fighter,  the online game play, where you could take on anyone from around the world and teach them a lesson in manners and beat the living snot out of them. 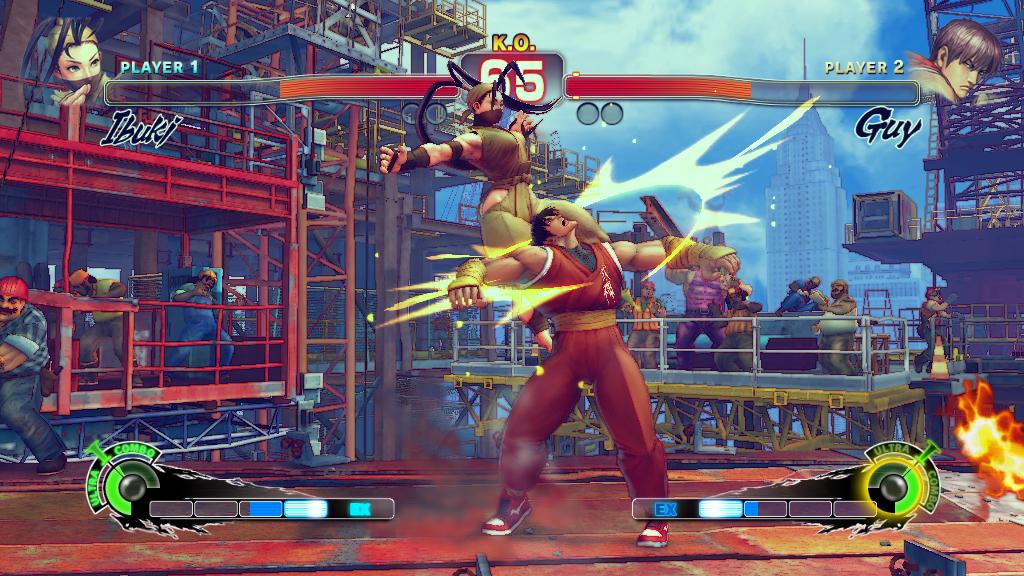 The great thing about Street Fighter IV was that you didn’t have to be a legendary hardcore experienced Street Fighter fan to pick up and play it.  Ultra’s and Super’s were very simple to perform and with the adjustable game mode difficulties even new comers could get to see what all the fuss was about with this superb fighting game.  But as you all know with all fighting games and especially Street Fighter IV if you wanted to really succeed and make your way to the top of the mountain you have to master and I don’t mean Ken MASTERS,  but actually master and learn every single little trick in the book to truly out perform, outplay and outwitt your opponent not just the AI opponent but your online opponent as that is where the bragging rights are earned and the respect is gained.

Specials, Ultra’s, Super’s, Combo’s + Ultra’s, Combo’s + Super’s, Combo’s + Supers + Focus + Kitchen sink moves must all need to be mastered, learned  and performed subconsciously. You must transform yourself into RYU.  He trains every day of his life to perfect his martial arts.  The fight is all he seeks moving from one tournament to the next.  With Street Fighter IV if you want to be a legend you must be dedicated, have patience, control your inner emotions, be willing to learn from your mistakes and move on to fight another battle.  Blood, sweat and tears is a must if you want to make it to the top !!! 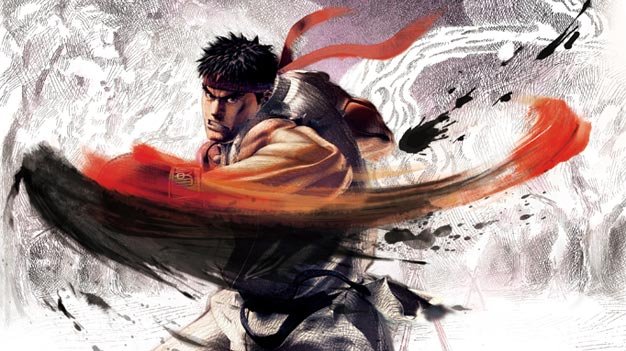 The Street Fighter IV soundtrack includes all the original tracks along with some new ones.  As you were able to do with Street Fighter IV you can switch between original Japanese and English voice acting,  I personally love the original Japanese voice as they sound far more superior than the English dubbed ones.  This is of course personal choice and doesn’t affect the overall performance of the game what so ever.

One thing Street Fighter IV was lacking was bonus stages, who’s idea was it to NOT include the car stage.  My heart sank when I found out there was not car stage in Street Fighter IV.  But let me tell you ladies and gentlemen Capcom have brought it back due to popular demand the car bonus level is back and you can smash the living snot out it.  Along with the car bonus level, the original barrel level that appears later on in the game has also made its come back.  The only one that’s missing is the final bonus level which has you destroying the fire drums on Zangief’s stage in Russia.   But we can’t complain.  The CAR IS BACK !! 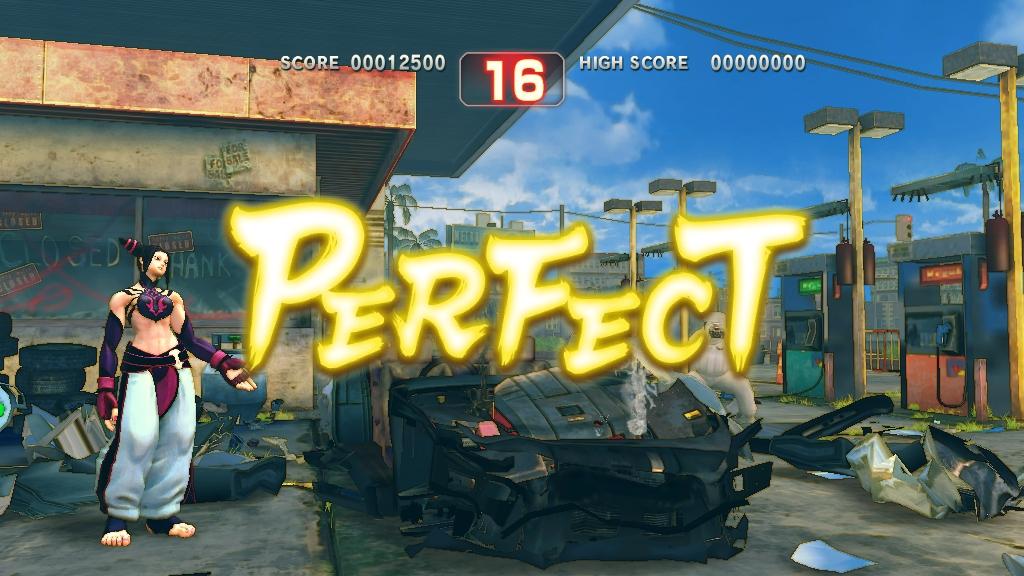 Super Street Fighter IV has the biggest roster in any Street Fighter game.  A total of 35 characters are available right from the start.  YES you don’t have to unlock any of them,  they are available for you to use straight away as soon as you press the start button on the controller.   You don’t finish it with RYU, to unlock so and so and then finish it with so and so to unlock so and so.  All the old characters are there along with the 10 NEW ones ready to be selected and played with straight way !!

Who are these 10 new characters ?? Well let me introduce you to all of them one by one.

Hailing from the Korea we have T.K.D specialist and totally new to the world of Street Fighter JURI, her Tae Kwon Do skills will be putting Chun Li to the test in a major way.  Another new comer is Turkish oil wrestler Hakan,  he’s big, he’s slippery, he loves to wrestle and is seeking to make the best olive oil on earth.  I think Zangief is going to have a very hard time putting him in his spinning pile driver !!

Next we have Capcom superstars making a coming back from different franchises :

Guy and Cody from Final Fight 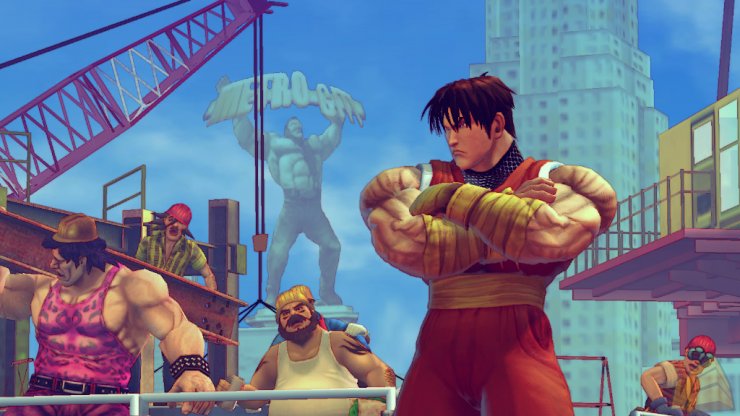 With all the formalities out of the way we can get down to business.  Super Street Fighter IV is not Super Street Fighter IV unless you play it online.  The online mode in Super Street Fighter IV is brilliant.  There are some new features such as team battles where players can take part in a 2 vs 2, 3 vs 3 or even a 4vs 4 elimination matches, this is super cool.  Another feature is the replay mode where you can watch a match and see where you went wrong and learn from your mistakes.  This is a great way to pick up new moves and techniques from other players and see how they pulled off that special move.  Then there’s classic arcade old school style, remember back in the day you’d be playing Street Fighter someone comes to challenge you.  You’d beat them then move on to the next loser till finally someone knocked you off your perch and you’d have to put your quarter on the machine to wait your turn once again to challenge him.  This mode is called endless battle mode.  If you want to take on all challenges and you think you’re hardcore then this is the mode for you. 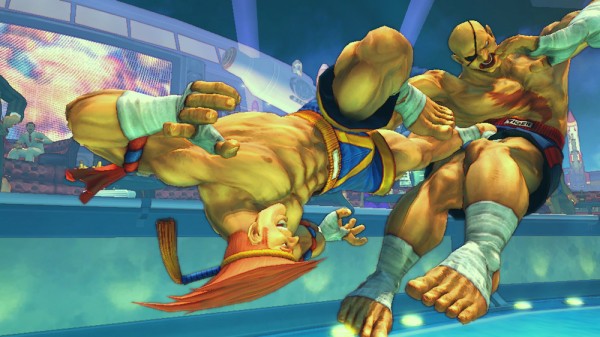