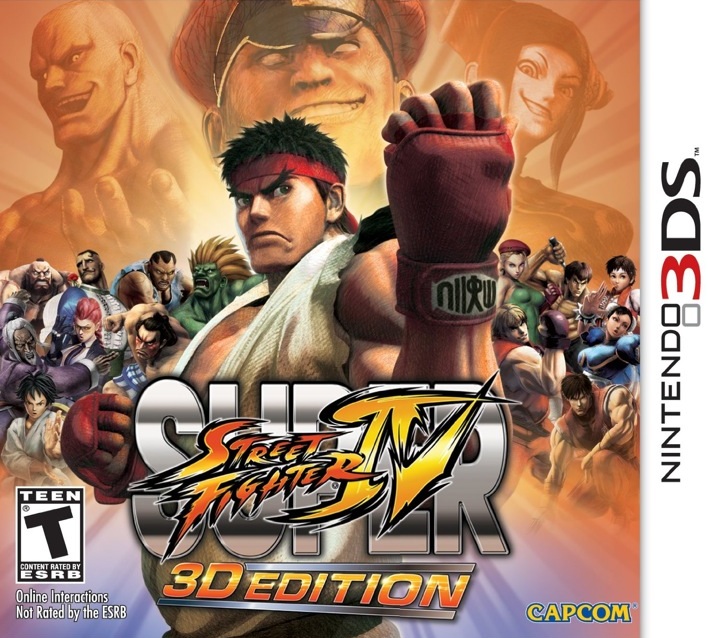 Overview:
Street Fighter is a franchise that has been around for over twenty years now. It had humble beginnings as an arcade game and flourished from there. No one thought that all these years later that the Street Fighter franchise would still be going strong and would have seen so many different games over the years. Street  Fighter IV is no exception to this rule. The first Street Fighter IV was released in arcades in 2008 and saw a home console release in 2009. Now after receiving an upgraded Super version Street Fighter IV has received 3D to create Super Street Fighter IV: 3D Edition. How does Street Fighter IV handle being placed on a handheld and most importantly, how are the 3D effects?

Story:
Street Fighter has never been known for its storyline and you will not find much of one in the 3D edition. The only actual story mode in the game is the Arcade Mode which will allow players to play as one of the thirty five different characters in the game. Each of these characters has their own individual storyline which can either be relative to the actual fights happening or will simply be something fun and enjoyable.

The story really doesn’t see a whole lot of development and although each fighter will eventually end up fighting their rival, the final battle will usually always result in a fight against Seth, with a special fight afterwards if the player managed to meet specific requirements. Each character’s story gets an anime-style cutscene ending and opening but that is unfortunately as far as it goes. Despite the fact that Street Fighter isn’t known for its story it is still a bit of a letdown to see nothing developed further in this day and age. 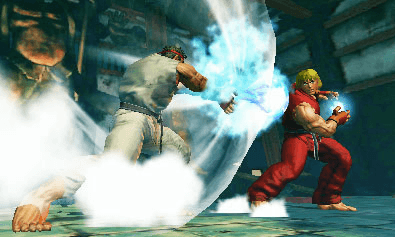 Graphics:
One of the most significant changes you will find in Street Fighter IV is obviously the graphical change. Being a title that was originally released on the Xbox 360 and the PlayStation 3 it is practically unfair to gauge the graphic difference but surprisingly enough the character models are very good looking. There are few differences to be seen between the two titles minus the crisp finish that console versions have. The flashy attacks and special moves are as stunning as you may remember them to be.

The one noticeable difference between this handheld version and the console version is that the background details have taken a significant hit. Most likely in an effort to preserve character appearance the backgrounds that usually had characters in the background that responded to the fight or at least followed specific actions are now completely static. This is something that really isn’t noticeable unless it is looked for as who has time to check out the scenery with a foot being placed in your stomach.

Audio:
The background music has not seen any loss in quality and is still contains plenty of memorable fighting music. The announcer is as great as one would expect with his upbeat voice announcing KO’s and more. Characters are voiced well enough with plenty of in-game voice clips that occur during a fight or before the fight starts. The opening and ending cutscene to every character’s story is completely voiced and is a nice touch to really reward the fighter. There is unfortunately no option to listen to the original Japanese voice dialogue which some may look for in a fighting game with such a long history but the English cast is suitable enough.

Gameplay:
Not much has changed about the structure of Super Street Fighter IV: 3D Edition. You will play as your selected fighter against your opponent and whoever drops the other’s health bar completely wins. With enough attacks you will raise a bar that will allow you to execute your Super Combo, or if you receive enough damage you can unleash a devastating Ultra Combo to swing the fight in your favor. 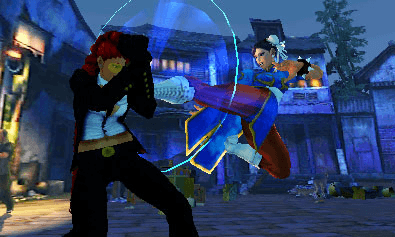 The shift to a handheld device leaves the controls changed however. Super Street Fighter IV has six different attack buttons, three punch varieties and three kick varieties. This means that one punch and one kick button is placed on the shoulder buttons and the L and R button are unfortunately very inconvenient to use, especially when trying to chain together a combo attack that uses the face buttons along with these shoulder buttons.

This is remedied partially by the addition of two different customizable control schemes that make use of the touch screen on the 3DS. These two modes are Pro and Lite controls. First the Pro mode allows players to assign basic button or button combinations to quick and easy taps that give them the ease of playing without having to worry about the shoulder buttons if they don’t want to.

Lite mode on the other hand is certainly an enjoyable addition as it allows the player to place four different special moves of their choosing on the touch screen. Players are able to place Super Combo and Ex attacks onto these Lite buttons as well as special moves. The addition of Lite mode provides a new accessibility to Super Street Fighter IV: 3D Edition which has never been available in the franchise.  Although some pro fighters may cry foul about this addition the ability to perform special attacks heightens the fun factor for those who never have picked up a Street Fighter game before. Each character has their own customizable control scheme so you will always be able to use what you want with each fighter you select as well. 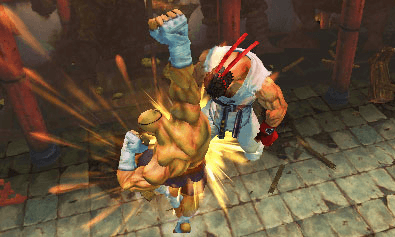 Other than Arcade and Versus mode the Challenge and Training modes return to help pad out the player’s options on what they want to do. Of course also returning is the online play. SSFIV:3D has two separate lobbies for Online Multiplayer; Versus and 3D Versus. In these modes you can search for players you want to fight or fight with friends via the Friend Code system. I had zero difficulty connecting to random people around the world and experienced zero lag online, even in 3D versus matches which makes Super Street Fighter IV: 3D Edition an amazing handheld title for fans of fighting games and enjoy online matches.

An interesting addition to the title is the figurines that you are able to collect. As you play through the game you earn points to buy collectible figurines that take the form of characters from the game. These figurines serve more than one purpose however. While you can collect them all and look through them at your leisure you can also build a team of five figurines that will do battle with other people that own SSFIV:3D via the SpotPass system with winners receiving more points to buy more figurines. Of course this requires you to pass players who also have their 3DS in sleep mode and own SSFIV:3D which makes use of this system limited and perhaps nearly impossible without being planned ahead of time.

3D Effects:
First it is worth mentioning that activating the 3D does affect how smooth a battle will play out. The loss in frame rate will cause battles to either go slower than normal or will occasionally cause lag between actions compared to when you are playing in 2D mode.

Moving on from that however we have a mode that was implemented entirely with the 3D effect in mind.  In an effort to not confuse anyone they simply called it 3D Versus. This mode places the camera slightly over the shoulder of one of the fighters and implements the 3D extremely well into gameplay. So much so that I found myself enjoying this mode much more than the original mode as it provided some spice to the standard 2D fighting. 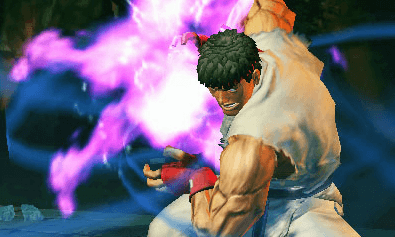 Now the opening cutscene doesn’t have 3D effects and neither do any of the cutscenes that play out during the Arcade mode which leaves a lot of lost opportunity. I don’t believe I have yet to see anime in 3D but it can most certainly be done and should have been implemented in a title that was launched alongside the 3DS.

Overall:
Some people may think that having a title released for current generation consoles released on a handheld would cause a severe loss in quality. While those people may be right occasionally, Super Street Fighter IV: 3D Edition is in a different league from those games. Despite a minor loss in graphics the title is everything a Street Fighter fan would want and more. The inclusion of the Lite mode allows players to easily access the title like they never have before and with the 3D to show off, more people should certainly be picking up Capcom’s latest installment to the franchise.