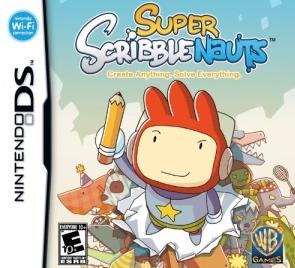 Just a little over a year ago, developer 5th Cell released the first Scribblenauts into the world on the Nintendo DS. While innovative and still a solid experience, the game had some control issues which brought the title down a bit. The new Super Scribblenauts included a new control scheme and adjectives giving gamers a whole new way to play and attempting to fix the minor problems based upon feedback of the fans. So how does Super Scribblenauts stack up? Here is my review.

Story
Much like the first entry, Super Scribblenauts has you assist Maxwell through puzzles to find the various starites scattered over the in-game universe. Each level requires thinking and creativity to decipher the puzzles and the level of difficulty increases as you move through the game. There really isn’t an overall story for the game but it is really about using your own words to solve a particular situation. For instance, a knight needs to take out a dragon so you must think up a clever weapon to help defeat the him. You could use a sword have a generic victory, but to be creative you can create a “Purple Freeze Ray” to instantly summon the weapon and assist the knight to a imaginative victory. It really comes down to how creative the player is on how much fun you can really have in Super Scribblenauts. 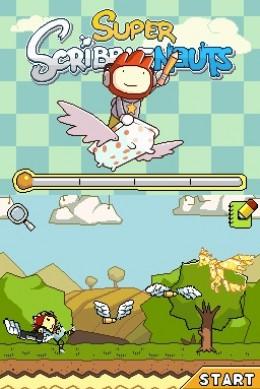 Gameplay
The biggest issue of the first Scibblenauts was the touch screen controls and I am glad to say that this has been completely fixed as the D-Pad is now fully implemented to move Maxwell so everything is much easier to do within the game. Another issue that was fixed was the “picnic basket” glitch which allowed you to place a starite in a newly spawned basket or any container for that matter and simply drag it to Maxwell. This time the starite will simply fall out leaving you to complete the level the way it was intended. For most levels, the starite does not appear until a solution is made to the puzzle which also helps rid the nasty glitch once and for all.

Now that the improvements are out of the way, the core game is even better than before. Super Scibblenaut’s in-game dictionary is now even bigger with hundreds of new words and adjectives added in for players to create just about anything. Simply type in any word (excluding pronouns and vulgar words) and you can instantly see your creation come to life. The adjectives are the main theme of the main game as many levels need you to think up items or people with emotions, colors, and many other expressive terms to solve a puzzle. Need to kill an enemy? Spawn a piece of evil sushi, give it a cross bow and watch the entertainment begin.

Most levels are pretty straightforward and as I mentioned so it is really up to the player how to solve a puzzle for the most part. As you play through the game, the more creative you are, the more Merits you will receive. The Merit system is a great way of getting rewarded for the crazy ideas you think of and made me go that extra mile to think up interesting solutions along the way. For those who don’t want the brain strain of a puzzle, you can simply play in the game’s returning sandbox mode which lets you do as you please and write up anything the heart desires. I spent my first few hours just playing in this mode as the dictionary of word you can use is HUGE and there is a lot of fun to be had and secrets to unlock just fooling around casually. 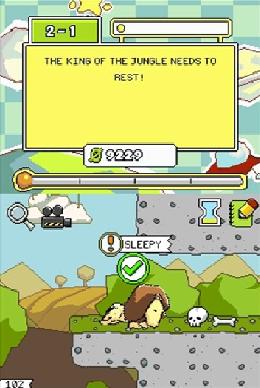 The level editor is another way to make your own puzzles and stages but it lacks anything different from the main game and since creations can be made on the fly anyway, there really isn’t much incentive to play it. Like the first game, internet memes and pop culture references are back and from Rickroll to Ceiling Cat and even a guest appearance from Mega64 which was quite humorous as well. Things like that add to the replay value which should buy you more hours of fun after you complete the over 100 puzzles in the game.

Graphics/Audio
As far as graphics go, besides slightly improved animations there really isn’t anything new but that is not really a bad thing. Animations could still use a bit more tightening up but all of the sprites are charming and creations reek of love from the development team.

Super Scribblenaut’s is still impressive music-wise with the game’s melodies being catchy and never monotonous adding to the colorful environments. Sound effects are the most impressive part of the audio though, as each creation’s audio sounds pretty realistic compared to their real-life counterpart. Cats, dogs, and the various humans you can spawn not only look the part, they sound it as well from a quick meow to the roar of an “angry dragon”. 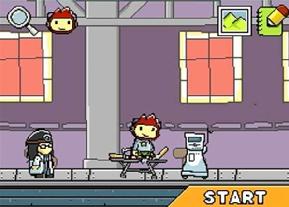 Overall
Super Scribblenauts is a game that rewards you for your creativity. 5th Cell did a great job at fixing the first game’s problems and it really shows the love they put into it by the enormous dictionary and funny and even somewhat creepy in-game sprites. If you are a casual or hardcore gamer, Super Scribblenauts is a game that defines pick-up and play with the simplicity of the interface down to the quick, yet fun puzzles. Graphics wise the game still could use some work and I would love to see more online features to fully utilize the functions on the DSi, but overall this is a worthy follow-up to a franchise I can see getting even better over time.

I Give Super Scribblenauts