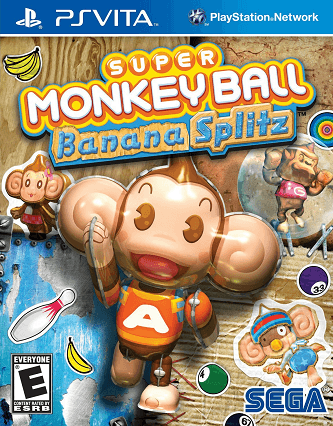 Overview:
There are game series which seek to deliver a powerful storyline developed throughout many releases and then there are simple and fun titles which are improved over time into creating an experience that many people will enjoy. Such is the case with the Super Monkey Ball franchise which appeared on the GameCube back in 2001.

With a simplistic goal and a unique look, it was unlike anything most of the world had experienced. Now over the last eleven years multiple titles have been released across a number of consoles and now Super Monkey Ball has made its way to the PlayStation Vita in the form of Super Monkey Ball: Banana Splitz. Is it worth your time? Let’s find out.

Visuals & Audio:
With the smaller screen and power of the Vita, Super Monkey Ball: Banana Splitz is a gorgeous game full of vibrant colors, well-crafted levels with each stage featuring a special theme, such as a special toy level, a dinosaur level and more, that sets it apart from others. Also the monkeys that are trapped in their little balls are animated well, in fact this Vita version may have the best looking versions of AiAi and the rest. 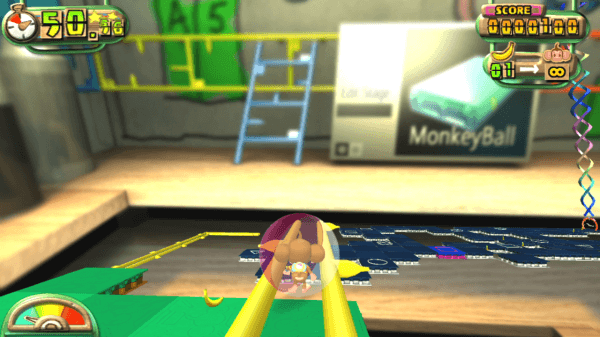 It is also worth noting that the title does not feature any voice work, though it does feature a number of neat little monkey noises. As you make your way through each stage you are presented with a rather simplistic but enjoyable set of background music that change between worlds. These songs usually match the theme of each stage well and help sell the theme as you roll through it.

Gameplay:
Super Monkey Ball: Banana Splitz is, at its very basic, as simple as many of you will remember. For those who haven’t played a Monkey Ball game before, all you have to do is roll a ball that contains a monkey through a stage to the exit. You can collect bananas in each stage and when you gather enough of them you gain an extra life. These stages range from very basic straightforward ones to complicated ones that require precision motions as you navigate a speeding monkey ball through half-pipes, sharp corners and various ledges in an effort to reach the exit in time.

Besides the time limit and the ability to try and set the best time possible, it is also possible to encounter a number of dangerous areas in the game which make up most of the difficult levels in the Banana Splitz. These dangers are things such as moving platforms that you have to carefully roll onto, sheer edges that have to be navigated and more. Tumbling off the edge of the stage will result in the loss of a life and the restarting of that level. 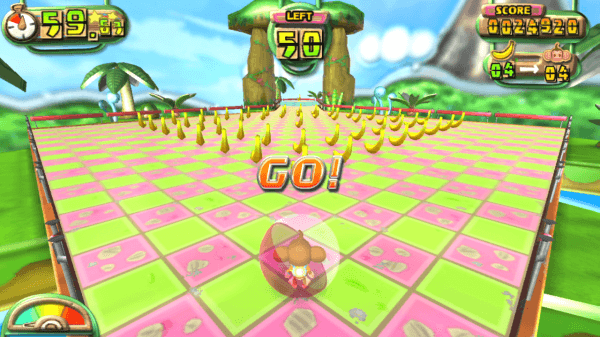 However as many may recall, the Monkey Ball series always contains a number of special routes that you can take on later levels, throwing yourself off a cliff in an attempt to reach the end of a stage faster, providing a risk vs reward section in some stages.

Outside of these standard levels players can also access a number of mini-games such as Monkey Rodeo, Monkey Target, Monkey Bowling and more. Interestingly enough, Monkey Bowling actually requires the player to play with their Vita held upright.  Perhaps the most enjoyable of these is the mini-game called Love Test which assigns a monkey ball to each analog stick, making it so the player must reach the end of the stage with both of them. Unfortunately games such as Pixie Hunt and Monkey Rodeo are simple failures that provide little enjoyment either through boring concepts or impossible to handle controls. 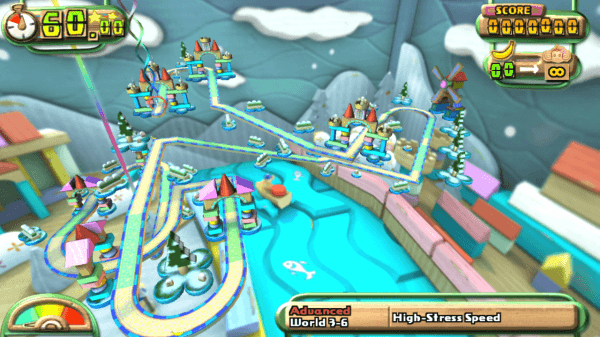 Players can also choose to create a stage of their own by taking a picture of the world around them. This picture will then be transformed into a level that the player can play through. Obviously some creations in this mode fall flat, literally, but it is a nice distraction that can provide an endless number of stages to explore.

As for multiplayer options, Super Monkey Ball: Banana Splitz features both online play as well as ad-hoc multiplayer. Interestingly enough there is also a mode that allows you to run through a stage, hand the Vita off to a friend and have them play through that same mini-game. That is right, unfortunately you cannot play through stages online with others, instead  multiplayer focuses solely on the aforementioned mini-games, which is a severe limitation to what could have been a neat beat the time mode. 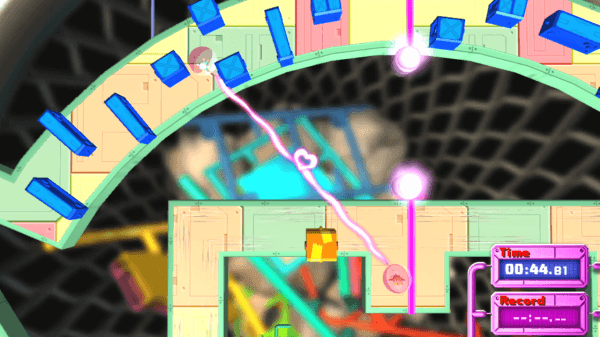 You may notice that I mentioned the analog sticks earlier and that is correct, Super Monkey Ball: Banana Splitz can be played with the Vita’s analog sticks, but it also can be played using the system’s gyroscope.  However it is highly recommended that you do not use these gyro controls as they make the game not only difficult to control but also nearly impossible to play unless you are sitting in one place with full concentration, a somewhat difficult task for a game that is meant to be portable.

As for the Vita’s touch controls, they are used to great effect in the aforementioned mini-games as well as for navigating the menu screens. Unfortunately the menus in the game are awkward and swiping at the screen makes for terrible navigation.

Overall:
Super Monkey Ball: Banana Splitz has plenty of things for fans of the series to love as it creates a gorgeous looking game on the Vita that has a number of nagging issues which unfortunately lie with the Vita’s own touch controls and gyroscope. It also is worth noting that the game often has some noticeably long loading times for even the simplest of stages. That being said, Super Monkey Ball: Banana Splitz is a nice return to form for the main Monkey Ball stages, while most of the mini-games fail at being enjoyable and more like wastes of time.