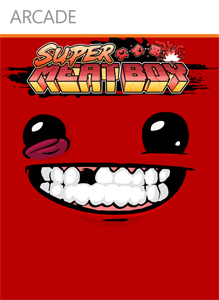 Story
“Super Meat Boy is a tough-as-nails platformer where you play as an animated cube of meat who’s trying to save his girlfriend (who happens to be made of bandages) from an evil fetus wearing a tux who lives in a jar.

Leap from walls, jump over seas of buzz saws, and run through crumbling caves and pools of old needles. Super Meat Boy relives the old school difficulty of classic retro platformers and streamlines it down to the essentials, no BS, just straight-forward twitch reflex platforming, and all while sacrificing his own well-being to save his damsel in distress.” [ via xbox.com]

You play as Meat Boy who is trying to save Band-aid Girl from the clutches of Dr. Fetus, while traversing crazy levels full of saw blades and other hazards that are dangerous to Meat Boy’s health. You will die a lot, but don’t worry; you have infinite lives (mostly). 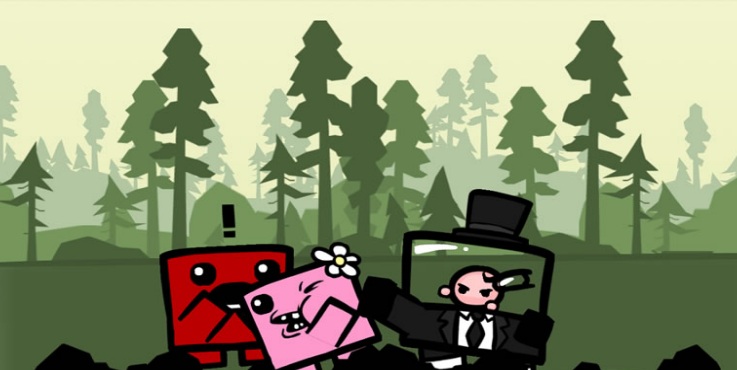 Gameplay
As the description mentions, Super Meat Boy is really hard. The game doesn’t start off that hard, and eases you into the gameplay pretty quickly. However, once the ball starts rolling, it becomes an avalanche of levels that become increasingly hard. Early within the game you will be introduced to warp zones, the dark world, new characters, and much more. Later in the game it becomes increasingly difficult to find everything or even beat the levels.

The main game requires you to beat each level by saving Band-aid girl. Levels regularly introduce new mechanics such as giant saw blades that will chop you up, missiles that lock on to you, keys that unlock doors, laser beams that turn on and off. The list keeps going and going. The combination creates extremely hazardous levels that are both challenging and fun to complete. After you complete a level, you can watch the replay that shows all of your deaths that occurred as you attempted to beat the level. This was supposedly intended to insult the player by showing how badly he sucks, but it turns out to be a pretty cool mechanic.

There are tons of secrets hidden throughout the game. Band-aids are hidden all over the place, and if you find a whole bunch you can unlock more characters that are from other indie developers. Each character has a special ability that can help you beat certain levels easier. It is a nice reward for spending all that time looking for the band-aids; they are not easy to find and even harder to actually get. There are also warp zones that act as throwbacks to classic NES games. These warp zones have a different mechanic that gives you three lives per level, if you lose all your lives on any one of the levels within the warp zone you have to start the entire warp zone all over again. This mechanic makes it quite difficult to complete warp zones but satisfying once you finally beat one. There are also certain warp zones that unlock special characters. These warp zones are created around the characters special ability and are a challenge just to complete. There are even more secrets within the game, such as weird glitch levels and more, that are hidden all through the game.

Audio & Graphics
The audio in Super Meat Boy is perfect. It doesn’t over power the player at all, and is only noticeable when you aren’t busy focusing on passing a level. Of course, not everyone focuses everything out while focusing on a task, but the point is: the music isn’t a distraction. When you do hear it; however, it is catchy and upbeat. There is even some nice chiptune beats on some of the warp zones. There is no voice acting, but facial expressions and a whole bunch of pointing gets the story across with subtle humor.

The graphics are 2D, but in this case it isn’t a bad thing. The developers did an extremely good job at creating subtle humor as well as emotional moments through the graphics alone. There was no need to have any voice actors, because everything is portrayed through facial expressions and body movements. The levels themselves are also well created, and perfectly executed. The cutscenes seem to be done in flash, and some may see this as lazy or crappy; but I see it as a throwback to Team Meat’s roots as flash developers. Edmund started out developing flash games and these flash style cutscenes are a nice addition.

Achievements
I left the secret achievements secret for two main reasons: I don’t know what they are and some people were complaining about me revealing the secret achievements. The other achievements aren’t easy anyway, and will give you plenty to do while not knowing the secret achievements. There are a few give away achievements, such as finding a warp zone; but a majority of them will take a while. Beating 10 levels, and an entire chapter without dying aren’t as hard as they sound; The first chapter is the easiest to do it on, and after a few attempts it becomes a walk in the park. Completing the dark world, and getting 100% should come hand in hand. They won’t be easy at all but they should be achieved extremely close together. Beating the dark world requires you to unlock and beat all 85 dark world variants, to unlock the real ending. Getting 100% requires you to beat the normal levels, the dark world variants and find all the bandages. By the time you beat the dark world, you just need to find the bandages. The warp zones and glitch level don’t count towards 100%.

Overview
Super Meat Boy is an extremely addicting platformer. The controls are so easy that anyone can pick it up, but only the dedicated will prevail in completing the game 100%. Secret areas to find, characters to unlock, and over 300 levels to play add up to be a massive game. Team Meat even promises to add free new levels to “Teh Internets” chapter via a little loophole they found. There are tons of levels to play, and regularly added new levels will keep this game alive for a very long time. Leaderboards let players fight for top spots against the world. There is tons to do in this game, and the easy controls and perfectly laid out levels will have you trying to beat many levels over and over again until you finally master it. While difficult, Super Meat Boy is still the best platformer to release this year and is worth a purchase.
I give Super Meat Boy