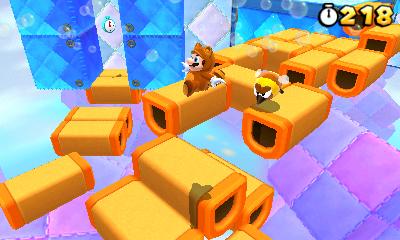 This wouldn’t be a Mario game without abilities. As I mentioned, the most prominent of such is the Tanooki suit, which can be acquired by collecting a Super Leaf. We haven’t seen Mario don this power for quite some time and this time around, it works in a completely different manner. Instead of running and then taking off to the air, this suit simply serves the purpose of hovering in the air after a jump, allowing for a safe and more precise landing. At first I was a bit taken back as while this works well, flying throughout worlds in Super Mario Bros. 3 was what made the Tanooki power so special. After a bit of time though, it becomes quickly obvious that these stages are just not meant be flown through and really aren’t built to utilize that past mechanic. Some may find this change a bit disheartening, but I simply couldn’t imagine it being done in any other way. Hovering might seem a bit of a downgrade, but it actually makes the game easier as less accuracy is needed when platforming. This statement stands true even further, as if the player loses a set number of lives, a white Tanooki suit will become available, providing Mario with the standard abilities of the power and invincibility against enemy attacks. The only downside of this super suit is how easy it makes the game, which can be a good or bad thing depending on your preference of challenge. 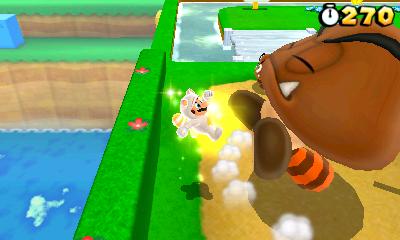 Fire flowers have also re-appeared and work about the same, but now fireballs can bounce off walls. It doesn’t really add much to what we have seen before, but it can be useful (and chaotic) ricocheting fireballs all over a closed area as all enemies meet a quick, fiery death. The Boomerang Suit is a new addition, and gives Mario the power to fling the said weapon at foes while wearing a protective blue Koopa shell and helmet (which looks awesome, by the way). Finally, for those aerial stages, Mario can now climb into a propeller block and launch himself into the air in quick bursts to reach much higher platforms. There isn’t a ton of variety of power-ups as a whole, but to be honest the stages are rather small and the abilities that are given seem to be just enough to satisfy one’s thirst for extra techniques. 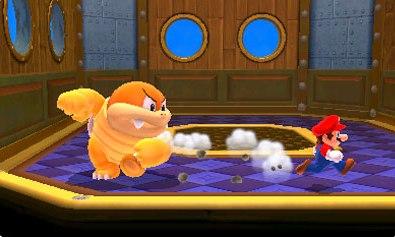 Just like the classics, nearly every world ends with a boss battle. Sadly, this was the only element I felt 3D Land lacked. There are only three to four bosses altogether and they are all re-used during the later castles and airships in the game. Bowser battles consist of the player having to dodge projectiles and hit a switch to destroy the bridge while Boom Boom and Pun Pun just need to be thwomped on the head three times before meeting their doom. There is a bit of variety offered to these fights as different strategies have to be utilized depending on the level, but these mega foes don’t require much effort to put away and just one or two more returning characters could have taken away that feeling of repetition completely.

Altogether, there are eight normal worlds and eight, much more difficult special worlds for Mario to explore. The first eight worlds are made up of five short levels, so it doesn’t take a lot to progress through quickly. Once at a boss castle though, the player must have a certain number of Star coins to enter, which lengthens the entire experience quite a bit and makes collection more necessary. Nintendo have cleverly hidden a lot of these coins as well, so even if you have enough to beat the game during your first playthrough, going back in and trying to 100% everything is a challenge to itself that completionists should find satisfying. I personally don’t try to collecting everything in most Mario titles, but the more I went back to previous stages in Super Mario 3D Land, the more I started to appreciate the game as a whole even more so. There are so many secrets, shortcuts, and hidden goodies to discover and the added Streetpass feature that opens up bonus, bite sized objective stages has kept the cartridge in my 3DS at all times. 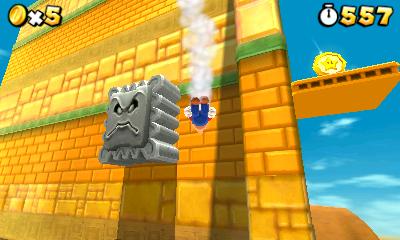 Visuals/Audio
Whether you are playing with the 3D slider all the way up or completely off, Super Mario 3D Land looks fantastic. Koopas, Goombas, and all of the usual fare were animated well and keep the worlds feeling lively and Mario and the typical cast of Mushroom Kingdom residents have retained every bit of their charms from the past. I usually turn down the 3D in most titles for the platform, but that isn’t the way this game was meant to be played. Many stages have certain areas that require the player to see the entire area in 3D as certain platforms are only visible with the effect turned on. I’m sure this was a hard feat to pull off, but Nintendo have done it beautifully and put a lot of other platformers we have seen on the 3DS to shame by executing the effect with such finesse. Watching a Bullet Bill launch toward the screen or viewing the true depth of a boom-a-rang throw makes the entire experience feel unique from previous titles, even though the gameplay hasn’t changed too much overall. 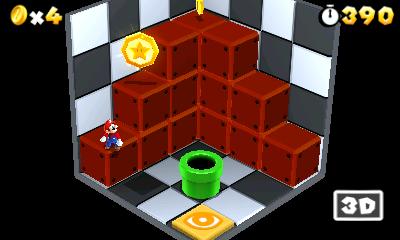 As far as the soundtrack goes, expect to treat your ears to some of the finest tunes in Mario’s history. While there are brand new pieces of music within, newly remixed tracks also play to capture the atmosphere of a stage. Anyone who has played an underground level of a Mario game will be taken back to the first time they played the classic stage years ago and the most famous theme in video game history has been given new life yet again to feel modern yet blissfully nostalgic. It’s more than just music that makes the sound so great in this game though. Mario’s voice actor has returned and still managed to capture the personality of this plumber to perfection, while Peach’s screams for help and Toad’s quirky dialogue are just as endearing as they ever were before. Going down warp pipes, getting a 1-UP, or growing bigger with a mushroom also sound just as you would expect, making it nearly criminal to mute the sound and miss out on it all.

Overall
There have been some fantastic releases on the 3DS thus far, but as usual, Mario just does everything better. Super Mario 3D Land takes nearly every element that has made the series great and blended it altogether in one full package. Sure, there are a few things I still desired, but looking back, I can’t imagine this game being done in any other fashion. This title also incorporates a bit of a gimmick, but it was executed to perfection and breaks new ground for 3D gaming as a whole. The burning question is, is 3D Land the best Mario we have seen to date? With that, I would have to say not entirely.

It seems like that no Nintendo platform truly stands out until a Mario game is released. That’s because Mario sets the example of what a video game should be. Even with all of the innovative level design, Super Mario 3D Land doesn’t exactly re-invent the series at all. Instead, it aims bigger and sets a standard for other publishers to reach for while still giving us yet another enjoyable and meaty experience in the process. Mario isn’t just special because of the quality found within his vast line of games. Nintendo have made Mario a leader in the industry as he simply shows everyone else how it’s done.