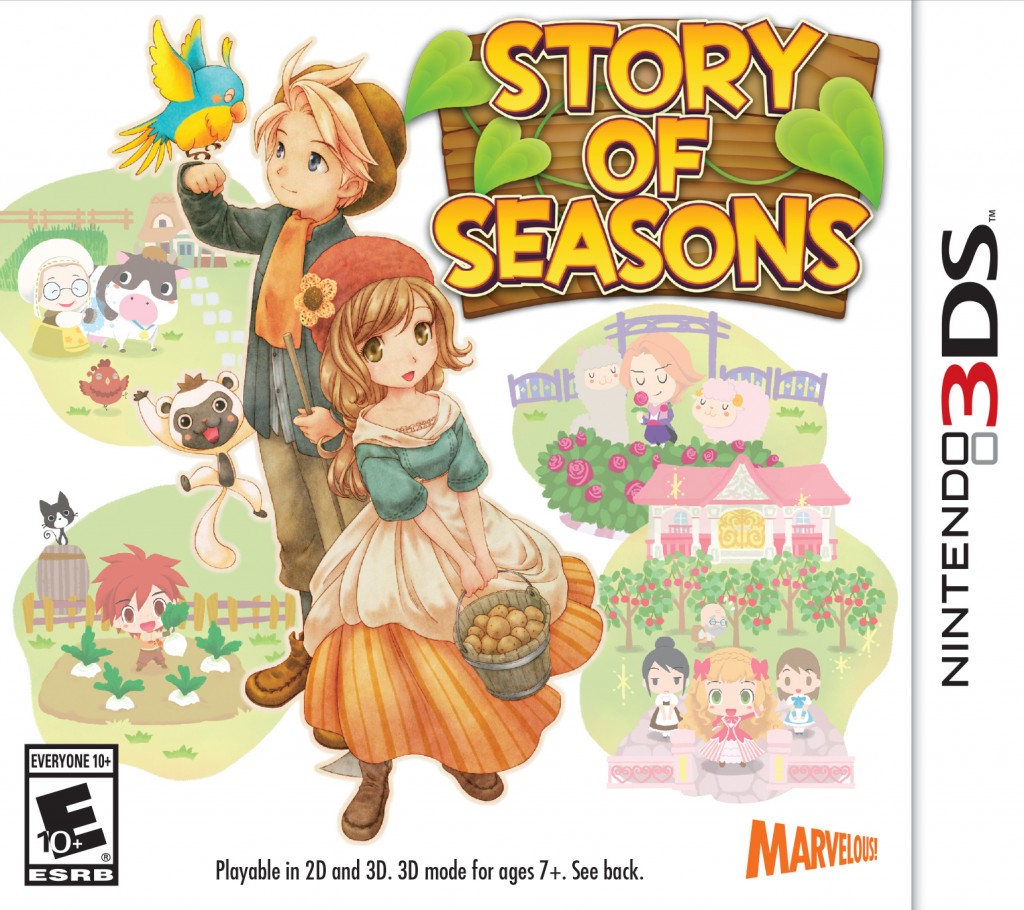 Overview
For fans of the Harvest Moon series, the last year and a half has been something of a confusing one due to the developers opting to use XSEED as their Western publisher starting with Story of Seasons. Due to the ownership of the Harvest Moon name by previous publisher Natsume, this meant that Bokujō Monogatari: Tsunagaru Shin Tenchi’s Western release would require the dropping of the signature name and instead require XSEED to stick with the game’s subtitle, Story of Seasons. So now that Story of Seasons has been released, is it everything fans of the true series have been hoping for?

Story
After growing tired with their normal life, the main character (either male or female as chosen by the player) finds a flyer from Oak Tree Town requesting farmers to help the small village grow. In an attempt to change their life the main character quickly moves to the countryside where they are welcomed with open arms by the few villagers in the area. After being taken under the wing of the old but still spry veteran farmer Eda and taught the ropes, it is up to players on where to go once the lengthy tutorial comes to an end and they are given free reign of what to do with their initial shanty house and unkempt plot of land. 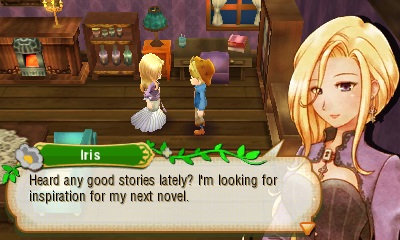 While the farming is the core aspect in Story of Seasons, players will still be spending plenty of time around the townsfolk and of course meeting the various bachelorettes and bachelors. Thanks to skilled writing/translation work by XSEED many of the villagers are delightful with only a few over-the-top characters being so to fit their role. I must also say that Story of Seasons provides a very unique array of love interests to pursue in the game, including a familiar face for longtime fans though she has undergone a bit of a name change between titles.

Their unique personalities are refreshing and a nice change from the standards that have been established in the series so far and it can be a real challenge at times deciding on which character to pursue, especially since a few only show up a year into the game.

Gameplay
In many ways Story of Seasons is the same game that fans of the series will remember but many of these old systems have undergone a refinement process to be a bit more streamlined while other new systems have also been added in, creating a nice and refreshing balance. It is also interesting to note that when starting the game the first time, players are asked if they wish to play “Seedling” mode instead of regular mode. Seedling mode lowers the amount of stamina taken by using tools and other activities, making the title a bit less of a grind especially since low stamina quickly becomes an issue on the regular setting and even on Seedling players will still find themselves close to passing out after trying to accomplish their basic chores while also trying to cut down a large tree. 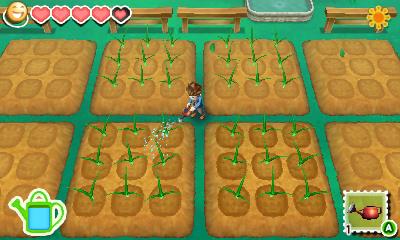 Now as for those chores, you see once players clear the initial introduction phase with Eda they are not only given most of the tools needed to run a farm (sans a pitchfork needed to muck out the barn) but also a bag of seeds, and even a barn with a cow to kick things off. This gives players a solid starting point as well as a few initial tasks to keep busy while earning money and trying to settle into a solid rhythm with crops being the player’s initial source of income and eventually allowing players to specialize more later on.

This is where the streamlining of some of the most monotonous moments of farming come into play as Story of Seasons no longer requires the player to till every single 3×3 section of land, plant seeds without missing, and then individually water all nine seeds. Instead all of the aforementioned tasks now occur in a 3×3 natural block formation that allows for fast tilling, fast planting, and faster watering. Even using fertilizer to raise the value of crops targets an entire 3×3 plot and harvesting now simply take one button press to gather everything together in a box. While this does give the player a little less customization of how they want their plants to be laid out, it does make for an easier and faster system that opens up extra time for players to take advantage of other things the game has to offer. 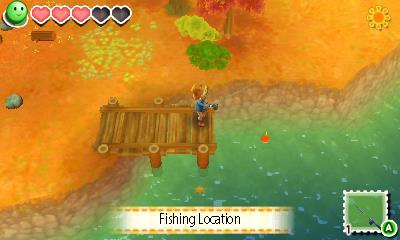 This ranges from roaming around town and talking to the villagers to raise your affection levels with them, diving in the rivers and ponds to catch fish with your bare hands or occasionally dredge up a special material, catch fish the proper way with a fishing pole, catch numerous bugs, and of course take care of your livestock. These are just some of the many ways to make money in Story of Seasons as well as kill time because while Story of Seasons does a great job setting up the player, it takes almost an entire year to get into full swing. This is due in part to a number of love-interests not appearing until later in the first year as well as the safari and mine necessary for certain resources being hidden away at first.

Thanks to the player now having to sell their crops, animal produce, and various collectibles to merchants that come to town from different lands, players are initially limited to only one merchant with a limited selection of items to purchase and there are a number of days that they won’t even appear, meaning at this point players simply will gather up as many items as possible while tending to their farm before selling everything at once when the merchant visits town again. Eventually more merchants do arrive for trading and players can take advantage of various market wants to obtain more money by selling to specific merchants that are in need of an item. 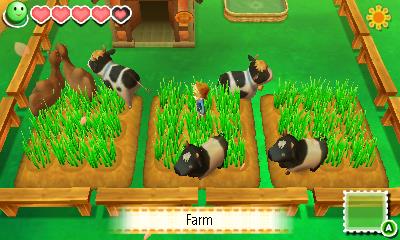 Once everything does start to open up players will find themselves running all over the place or riding their horse (or even faster using a carrot to quick travel between certain areas) as there is eventually just so much to do and many different opportunities to take advantage of. While players are initially only given their plot of land to work with, they are eventually given challenges by the town’s guild to compete against the other farmers in the area for temporary property rights of other fields. These side-fields often are required to grow specific crops or items that otherwise cannot be grown at your farm or produce higher quality crops, giving players extra incentive.

There is also plenty of customization available in Story of Seasons, but on a slightly more limited and easier to handle scale compared to New Beginning. Players no longer have to worry about building an entire town but can now use materials to create pieces of furniture from blueprints and customize the interior of their house as well as create various animal houses since Story of Seasons features more types of livestock than past games that I can remember, buildings to craft or refine various materials into more useful or valuable items, and decorations to create a unique looking farm. 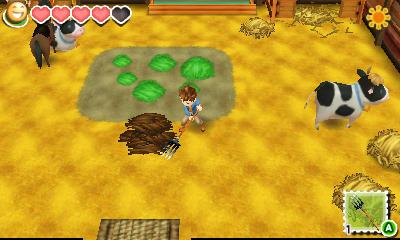 Off of the farm players will find themselves greeted by the aforementioned colorful cast of villagers, a number of which have special events that can be triggered once they like you enough, as well as potential marriage candidates. Like past games each character has different preferences when it comes to items meaning players will have to find out what each girl or guy likes as a gift and what items they hate in order to woo them into eventually marrying the player. In a first for the series, players can opt to spend a certain amount of money on either lavish, modest, or low-key weddings which appear to affect how quickly your wife, or you if you are a female character, get pregnant in the game.

Visuals & Audio
Story of Seasons sports an aesthetic that many fans of the series will be familiar with as it utilizes a style similar to most recent titles but with more refinement. The character portraits are nicely detailed while the actual models are fairly cute looking albeit rough around the edges. That being said there are plenty of lush details in every path that players run through and watching your crops sprout up due to your tender care is always a delight. 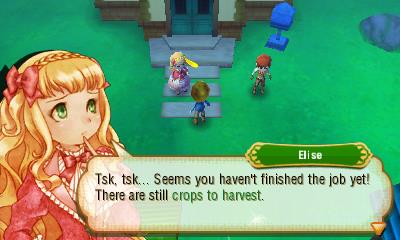 Unfortunately this level of detail does come with a price and that is a poor frame rate. While simply walking through town may not cause any issues, packed fields or densely populated areas will cause the game to slow down to a noticeable degree which is frustrating but far from a deal breaker. Thankfully Story of Seasons’ soundtrack is made up of soft enjoyable melodies that players can spend hours toiling the fields to without even noticing how much time has actually passed by.

Overall
Despite the name change that may throw many off, Story of Seasons is the game that Harvest Moon fans should be looking for when they head to the stores as it is everything they could hope for. While it does streamline some of the more monotonous tasks, this simplification can only be seen as a good thing as it opens the player’s time up to explore the vast amount of content and activities available to them once Story of Seasons decides to open up after its slow start. With more content than ever, Story of Seasons delivers the same addictive and enjoyable feeling that fans have come to love while making it easier than ever to jump into this long running series under a brand new label.