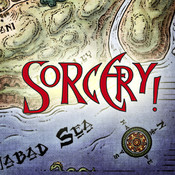 Are you one of those people who loves the idea of a “choose your own adventure” book but hate the book aspect or how dated something like it has become? Well you’re in for a treat because Steve Jackson(Writer/Creator of the original book Sorcery! and UK game maker) has brought this style of storytelling back for a second run, on the iOS too, and I have to say it kind of works. 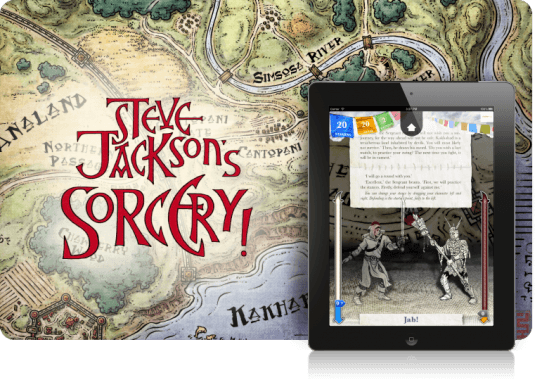 Although a huge amount of the story and what happens within it is decided by you. The main backstory or what I’m calling a “Head towards” story is that you’re a warrior that has trained for a great deal of your life and you are now on a journey to find a crown that is said to end war and create harmony, so no matter what other little things happen throughout you’re still “Heading towards” your end goal which is to nab that crown. Pretty standard fantasy stuff…and it works. All of the decisions you make through your journey add or take away from the story in ways that you probably wont see coming; saving a man from a tree at the beginning of the game could and will make something harder or easier for you later down the road. I don’t plan on giving anything away though.You don’t feel like you’re playing through a story in this game, you feel like you’re making a story, it rocks! You ARE this hero and you play the way you want to. Are you rude? Are you a nice guy? Are you just a killing machine? That’s entirely up to you. Playing through this game I made decision like I would if I was in this particular situation, like talking nicely to an old man for information or running after and fighting barbarians because they’ve terrorized a town. It’s just great to be able to make your own story yet still feel like you’re headed towards a bigger, better, more epic story in the end. 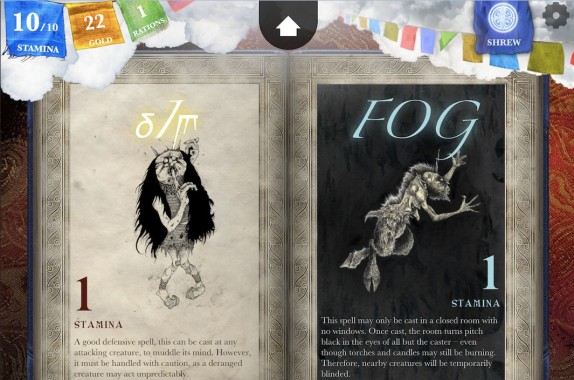 The visuals remind me of a mix between a book and a tabletop fantasy game and I’m almost certain that’s exactly what the devs wanted it to be like. It’s style is extremely old-school fantasy and the board game setting really kind of helps you settle into the game. A great deal of the monsters and characters are hand drawn and illustrated and they look really nice. The colours are very earthy, a great deal of browns and greys, and that also adds to the engulfing nature of the game. Everything is beautifully designed and is honestly exactly what you expect from this type of game yet it’s done in a way that doesn’t feel generic, it’s one of those “you just have to play it” things that can’t be fully explained. 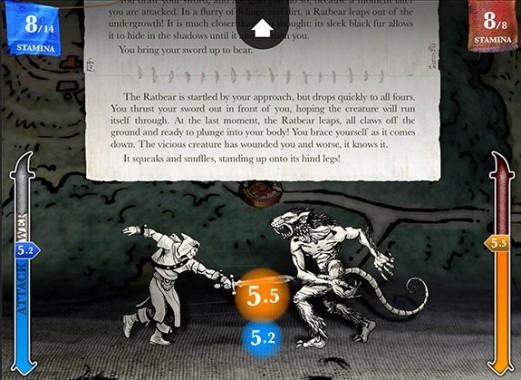 There isn’t a great deal of music in this game but that wasn’t my main focus when playing the game. The use of background sounds really blew me away, the cawing of crows or the mooing of cows and the bustling of people really allowed you to immerse yourself in this game. Walking near a forest and you can hear insects and animals, sleeping near a fire and you can hear it’s crackling and popping. Even during action scenes; the sounds of the monsters and the weapons was well done. No faults when it comes to using sound effects. 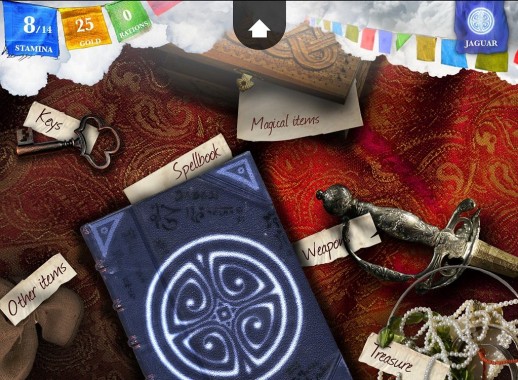 Very basic, very simple, very easy to learn. You move around a big map as you progress through the story much like a board game, you also have a player piece much like a board game. It’s exactly like a normal fantasy game in this aspect, you have a sword, you have a spellbook and you have decisions to make. Instead of fighting an enemy you can blind them with a spell and run or hit them with a fireball before the fight has even begun to get the upper hand, you travel to different places, talk to different people in the hopes they will reward you with different spells or weapons to use. In short; this game is played very similar to how you would play a game like Dungeons and Dragons. Just without the dice. The gameplay is great for what it is, any other type of gameplay probably wouldn’t have made the game what it was so it really can’t be put in a negative light. The only thing I could say against it is that it definitely puts a limit on the target audience; you REALLY have to like this style of game to honestly enjoy it. There’s a great deal of pointing and clicking. 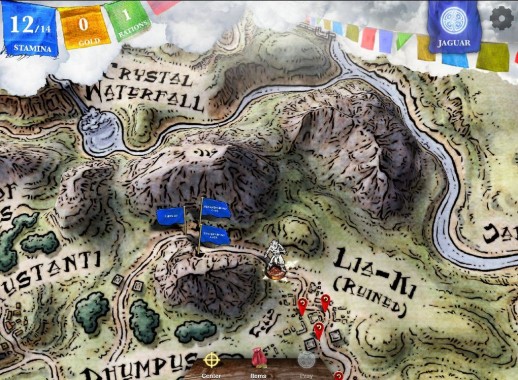 In end I have to say that Sorcery is a great game, it really is, for people who both enjoy the genre and game style. I really wouldn’t recommend it to the same people who I’d recommend Call of Duty or Bioshock or any other new games out there, this is in a league of it’s own with a very specific niche but those who do like it will like it a lot! I’m NOT a fan of this genre nor game type but I consider myself very open minded when it comes to reviews and, let me tell you, I found myself going back to this game again and again and again so I can see it having a very focused and staunch audience for sure. If you’ve read all the way up until this point I will suggest this game to you, you’re the games intended audience and you’re definitely the ones that will appreciate it the most.