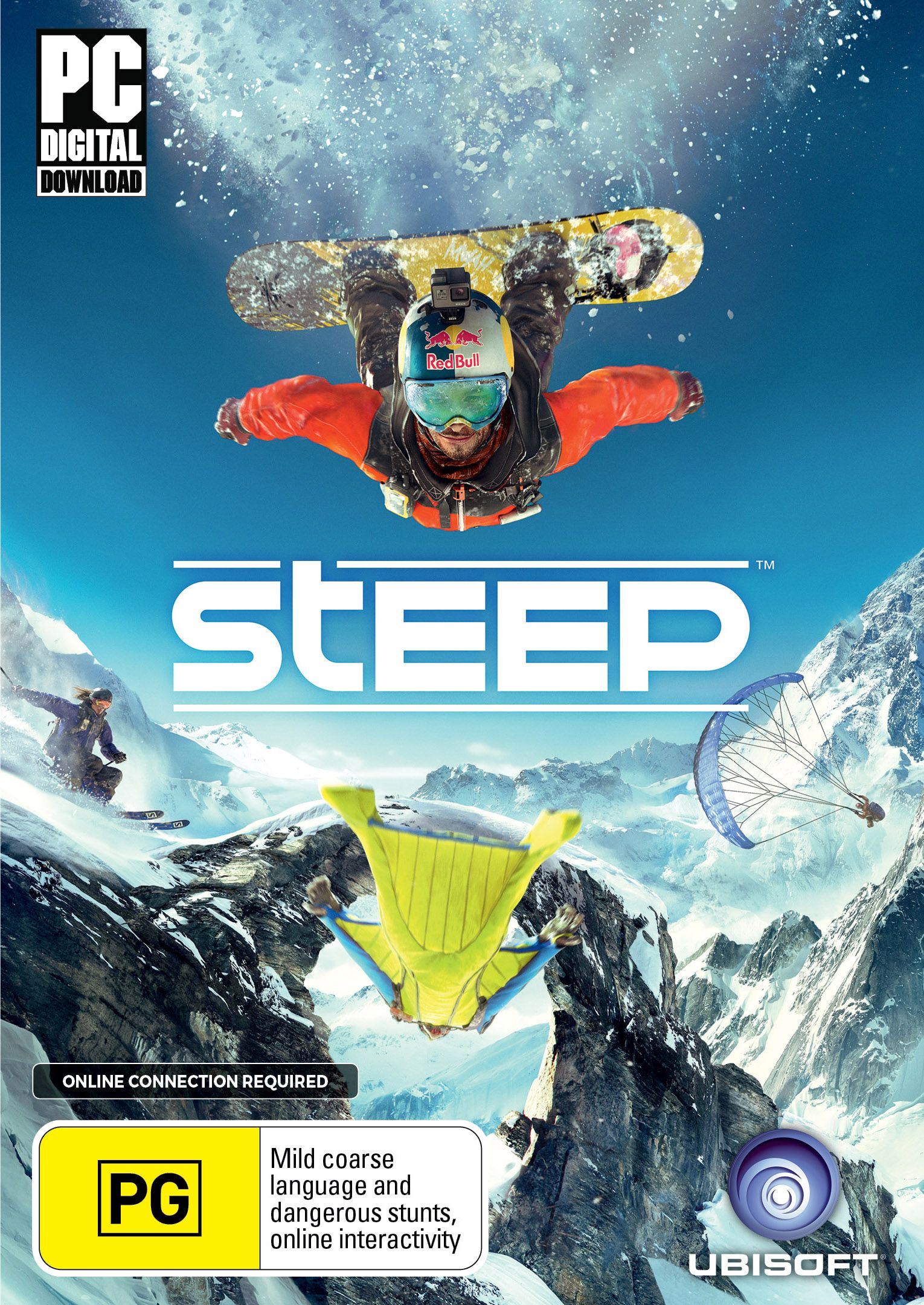 Steep is Ubisoft Annecy’s first foray into winter sports. The studio previously specialized in simulation before moving on to provide support for Ubisoft’s major studios in France and Montreal, now specializing in multiplayer gameplay. Steep gives players access to the open world of the Alps mountain range. Gamers will be able to traverse the mountains by ski, snowboard, wingsuit, and paraglider, seamlessly swapping between sports as they please.

Steep doesn’t have much of a story and that works to the game’s benefit. Players are introduced to the world by a nameless voice who serves as the player’s promoter/manager. He provides a basic tutorial of navigating through the world of Steep and points out new locations players unlock as they gain levels in the game. The spirit of the mountains also provides some monologues in the secrets of the mountain quests, which range from decent to really cheesy. The nebulous nature of the game’s story elements fits well to the open world freedom of the game and I think trying to force in a plot would have probably been to Steep’s detriment. 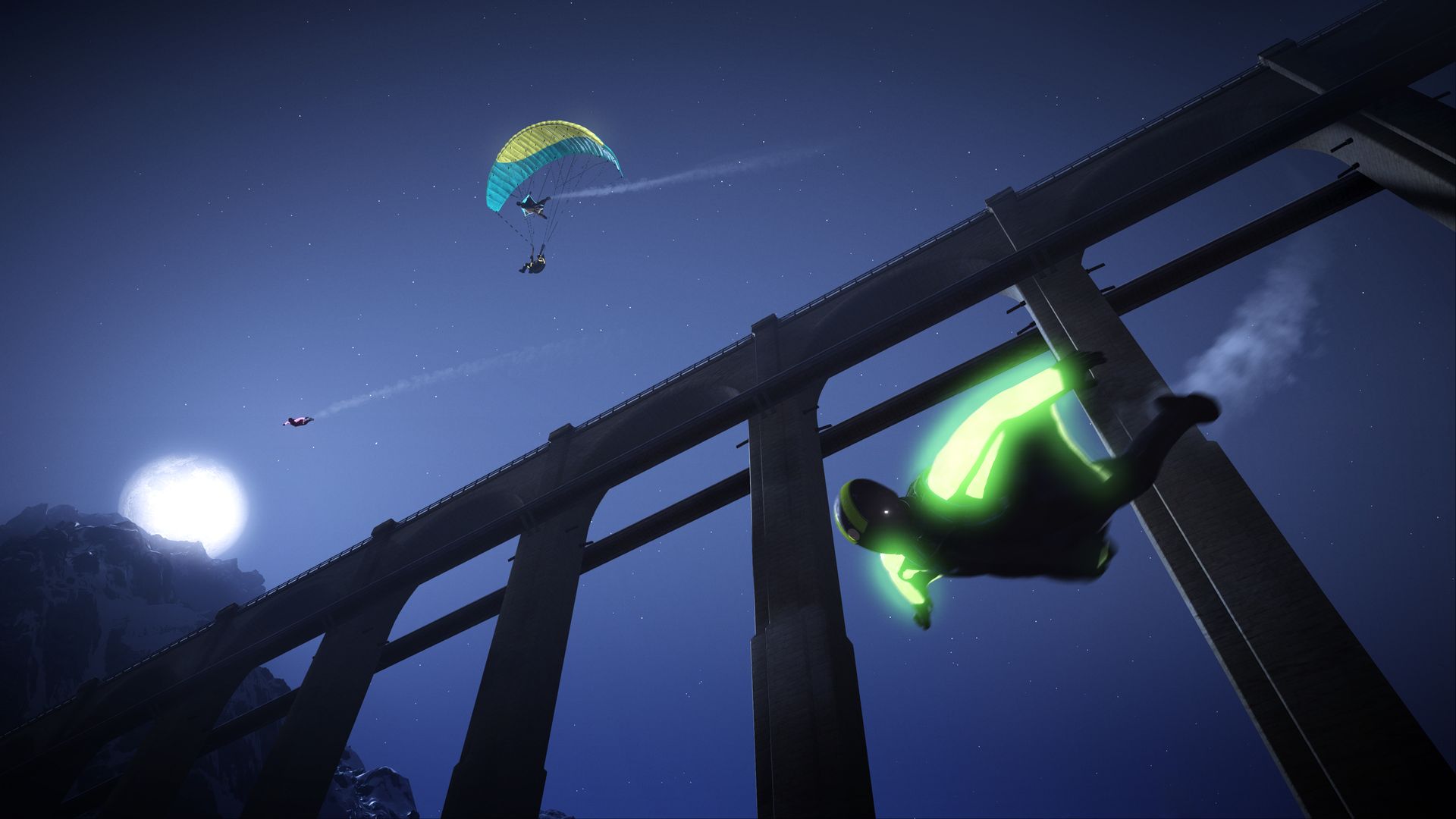 Steep’s gameplay revolves around four extreme sports: skiing, snowboarding, paragliding, and wingsuit flying. Players can switch between all four sports or slowly plod through the snow on foot as long as they come to a full stop on the ground. The controls are solid and should be familiar to anyone who has played an extreme sports game. I think Steep is better suited for a controller over the mouse and keyboard, but either will work well enough.

One of the Steep’s biggest pitfalls is its poor tutorial. The absolute basics are explained through a few short levels and a tutorial video. Tips pop up from time to time, but there is no easy way to go back to quickly look over old tips or read up on the game’s controls. The only easily accessible option is for players to rewatch the tutorial videos, which are not the most helpful things in the world. To figure out some of the finer points of paragliding, I ended up having to rely on Google to learn how to pick up enough speed to start earning gold medals. I suspect that many players will learn these tips and tricks by doing something similar. 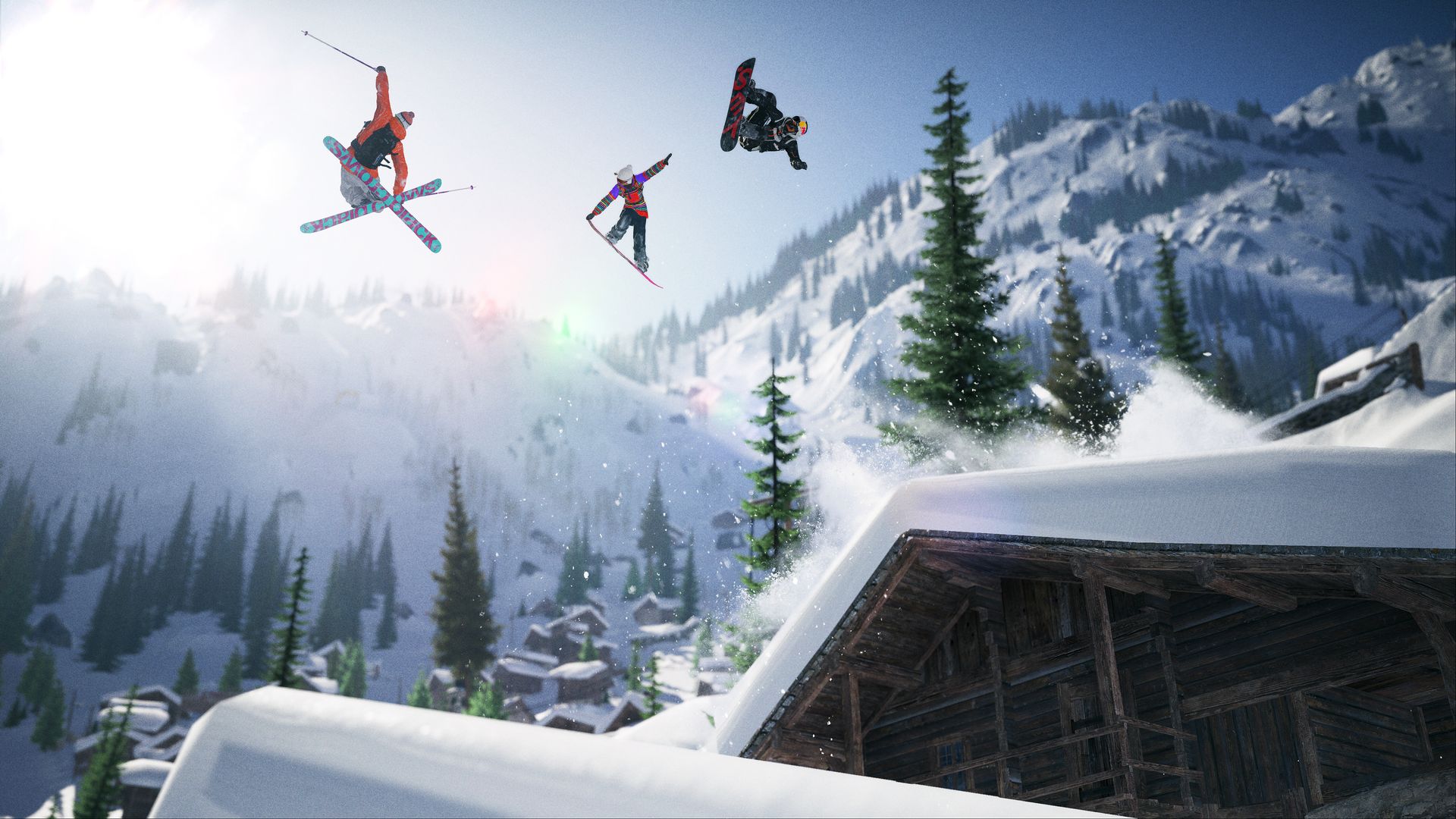 The entire mountain range is free for exploration. As players travel around the Alps, they can also use their binoculars to scout out new drop zones or challenges. Tons of Mountain Stories and points of interests are scattered across the map waiting to be discovered. Travelling around the mountain is very easy as players can quickly switch into mountain view to travel from place to place or restart challenges with a press of a button. One of Steep’s biggest selling point is the freedom players are given. While there are plenty of traditional challenges like races and stunt competitions to partake in, the greatest joy is simply finding a nice high spot to start from and careening down the mountain side without worrying about finding the most efficient route or pulling off mind boggling stunts. Roaming around the mountain strikes a perfect balance of relaxation and stimulation, which makes Steep one of those perfect games for enjoying a long podcast.

Steep falls a bit short for the more competitive or those who need a little more direction in their life.Scattered across the mountain are pre-made challenges in all four sports Steep offers that challenge players on things like speed and score. Additionally, players can create their own and challenge their fellow players to best their scores. I do wish there was an extra menu listing all the available challenges as digging around the mountain view for specific challenges can be a bit tough when they are all scattered across the entire map. None of the challenges are particularly ground breaking and I found myself bored after a while due to the repetitive nature.

Steep is not without its quirks. The game has a habit of spawning players incorrectly, whether it is facing the wrong direction, a few feet away from the spawn point, or some combination of the two. While this isn’t a big issue for snowboarding, it’s downright annoying on skis and can be deathly for paragliders and wingsuits.

We live in a social media age with services like YouTube and Twitch holding a huge chunk of the media consumed by the young, so it is no surprise that Steep is heavily invested in video sharing. In case you didn’t get the point the game has very prominent GoPro product placements in game to remind you. Players can share their favourite moments with the video editor built into the game. I found it was easy enough to use, as players can quickly look back at their run and find all the epic bits they want to keep.

Steep’s multiplayer options are good and follow the open-ended spirit of the game. Random players that are playing in the same area will appear in your game, which gives mountains a touch of life. It is easy enough to see a player in game and shoot them a quick group invite or dig through your friends list to invite some old friends into your game, with up to four people can group together and explore the Alps as a team.

Steep is a gorgeous game. The mountain topography has been created to be both eye catching and incredibly fun to traverse. Considering the game takes place in the same geographical range, some efforts have been made to help distinguish different parts of the mountain, which pays off nicely. Though players can’t create their own characters in game, there are plenty of clothing and equipment options to choose from. It seems a little counter-intuitive to the game’s focus on freedom of choice, as much of it requires players to complete challenges to unlock them.

Steep’s soundtrack features a mix of genres that should have something of interest for everyone. While music is a highly subjective matter, I think the soundtrack is a great mix that suits the game and extreme winter sports culture well. The sound effects are good. I feel a little mixed about the voice acting. A lot of the narration voice work is excellent, but the character lines tend to get a little repetitive. 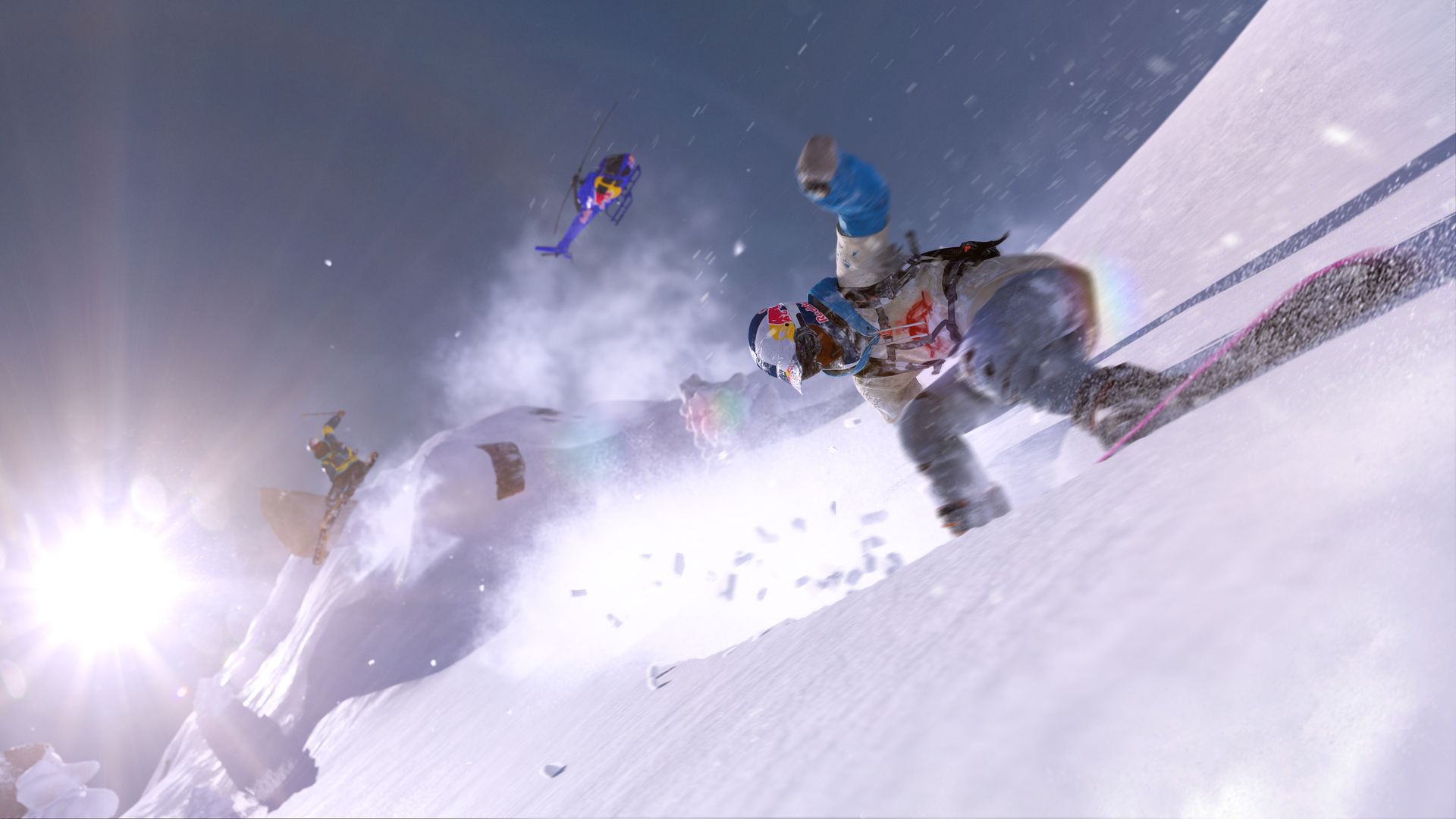 Steep isn’t for everyone. The open-ended gameplay and the repetitive nature of challenges will not win over new fans to the extreme sports genre. Additionally, those who need direction in their video games will have a hard time with Steep’s nebulous nature. The poor documentation does no favours for new players either. However, fans of extreme sports that grew up on the SSX and Tony Hawk series will likely love the modern take on the genre Steep brings to the table.

Steep won’t create a new generation of extreme sports fans, but it is a solid title for the existing ones.
7