Up periscope. Let’s take a look at the latest game to surface from the Nintendo Company. Hopefully it’s not a dive. If you haven’t figured it out yet from my string of naval pun’s Nintendo’s latest game is a submarine game entitled Steel Diver. Available on the Nintendo 3DS, Steel Diver is a strategy game where players must guide their submarine through treacherous waters while at the same time avoiding and destroying any enemies that float by. 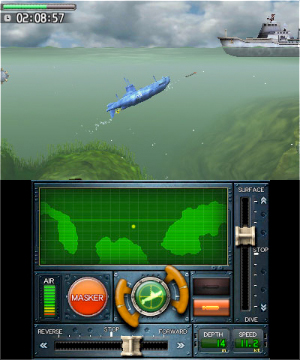 Steel diver is divided into three different mini-games. The first of these games involves navigating a submarine through an underwater maze, while avoiding hazardous enemy subs, rocks and sea mines. Before submersing into the depths of the ocean, you are given the option of choosing your very own submarine. There are three to choose from, each with their own pros and cons. The first in the fleet has a simpler navigation control system, which makes it easier to use but difficult on those narrow passages. It also has the ability to fire torpedos vertically that comes in hand for those looming enemies ships at sea level. The second sub is a good all rounder, with more advanced steering options in the form of a wheel-type controller. The last vessel you can choose is the most difficult to control, but allows for more complex movement, despite its size. This last submarine also has the most firepower, with the ability to fire four torpedos consecutively rather than two. 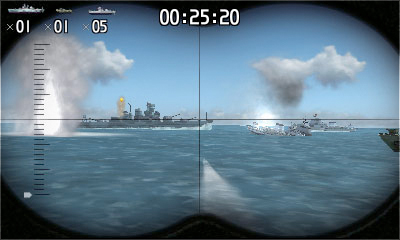 Regardless of which submarine you choose to pilot, all three are still rather difficult to control. This is of course the point of the game. The challenge is to navigate through a rocky maze using two controls: horizontal for pitch and vertical for depth. If the submarine receives too much damage it will spring a lead and the controls will be momentarily disabled unless you quickly plug the leak with your stylus. Once the health meter reaches its end, the game is over. The good news however is that if you surface to the top for a while the submarine will repair itself. The key to utilising this is time management, if you spend too much time floating on the surface the timer will run out. There are also convenient little air pockets located underneath the depths of the ocean for you to strategically utilise on your journey. 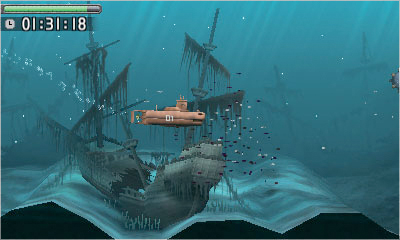 There are two means of entering the second type of game in Steel Diver. After completing a mission, the periscope breaks the surface of the water and Periscope Strike begins. This portion of the game utilises the 3DS’ gyroscopic technology and allows you to rotate in a circle while attempting to locate and destroy enemy ships within a certain time limit. While this mini-game automatically comes at the end of completing a mission, there is also the option of selecting it to play on its own. Playing Periscope Strike this way will give you a few more options, such as selecting different enemies and different weather conditions, my favourite being enemy ships in a storm which proved to have some impressive graphics.

The last mini-game type of Steel Diver is a clone of the classic board game, Battleships. Steel Commander creates a battleship type board on the touch screen. The goal is to locate your enemies’ ships and destroy their supply ship and protect your own. Personally I feel like this portion of the game is designed a little like an iOS game with some 3D graphic cut scenes. While the graphics are impressive, I can’t help but be annoyed as I just sit there and watch my ships be attacked without the ability to move. On the other hand, if I am to locate an enemy ship or sub myself, I have the more engaging option of attempting to either drop a bomb or shoot a torpedo at them – fairly similar to the Periscope Strike version of Steel Diver. It should also be noted that this portion of the game also has an online multi-player function, or failing to log online, you can also test your skills against the artificial intelligence of the game. 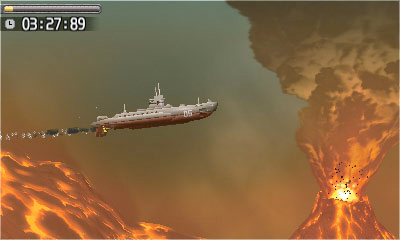 Nintendo have made good use of their 3D technology on this one. Depending on which of the three gaming options you take, you are going to have different graphical representations. Because Steel Commander emulates a game board, the graphics aren’t impressive. However, in terms of representing a board game graphically, I think Nintendo have done a good job, creating little game pieces to sit on the board that look like they are straight out of the box. This portion of the game also has some pretty decent 3D cut scenes and gaming options, but compared to the other capabilities of the game graphically it is a little dull. The missions’ portion of Steel Diver has some incredible use of the 3DS’ graphic capabilities. Nintendo have created some amazing undersea worlds, with stormy seas and even underwater volcanoes. With the 3D slider up to full capacity, these graphics are truly impressive. With stormy seas in mind, it is worth noting that the most impressive graphics in the game are those that emulate weather at sea. The best example of this is one of my favourite portions of the game, enemy ships in a storm in Periscope Strike. Not only does it just look incredible, in 3D or 2D for that matter, but also the graphic representation of the physics of being at sea is pretty much on the mark. At least I can only assume, it’s been a while since I used a periscope in hazardous seas.

The sound effects for Steel Diver are great fun. There are a lot of explosions and of course a fantastic array of submarine lingo: “surface”, “dive!” and “all ahead”. This paired with the music really makes for an atmospheric experience, fit for underwater adventure. The music is somewhat reminiscent of some older games for Nintendo consoles. I can’t help but think of Donkey Kong Country for the Super Nintendo, and the ever-annoying underwater levels. This, paired with some mechanical and industrial sounds really adds to the underwater submarine aesthetics of Steel Diver. 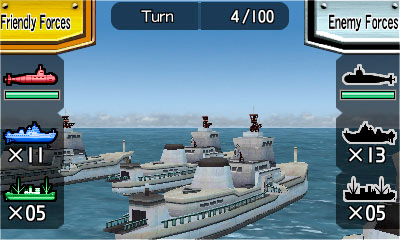 As a time management and strategy game, Steel Diver has some merit. It is a fun game to attempt to master, but that is where the fault of the game lies. It takes some time to try and get a good grasp of the controls, once you do the game is fun. However, it seems that as soon as you begin to get to grips with how the game functions, you’ve exhausted all your options of game play. The mission option has an option where you can try and beat your records, but I’ve never really been a fan of trying to best my own timed scores in games. There is also the option of completing missions with all three submarines, but again I feel that this gets a bit repetitive with only seven levels and some quick timed levels to complete. While the graphics of Periscope Strike might be incredible, the gameplay is very near exhaustion by the time you get to have a go at the third option of playing the game. It is essentially always the same, and what adds to this more is the fact that this option of gameplay has been integrated into the mission mode. Chances are you have already had a go at playing missions before trying your luck at this game on its own. There is no doubt about the playability of Steel Diver as a whole game, my only concern is how many times will you come back to it after completing the rather short game.